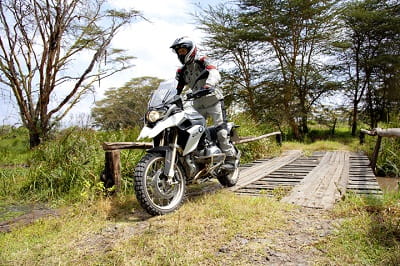 BMW’s new R1250GS Adventure is on the way according to BMW sources at Milan, but we’ll have to wait until next year to see it.

The new liquid-cooled R1200GS stole the show earlier this year when it was announced that BMW would be producing a liquid-cooled GS for the first time in its history. But the only big BMW GS at the Milan Show was the standard bike, and not a GS Adventure. Well, not yet anyway.

BMW insiders told us there is definitely an Adventure in development but we won’t see it until next year. Expect longer travel suspension, a bigger petrol tank, engine bars, and a more aggressive look for round the world travellers.

BMW is keen that the new R12000GS keeps up its credibility as the all-round choice for world adventurers and got Christian Pfeiffer, to ride one down the stairs into a packed press launch. It had knobbly tyres fitted too.

The new GS does look fantastic in the metal, and BMW was keen that it looked updated but still stayed true to its styling roots. It’s certainly a formula that seems to have worked over here in the UK.

With Honda, Yamaha, KTM and Triumph all going up aggressively against the current air-cooled and outgoing mode R1200GS, BMW GB  have sold just a handful fewer bikes in 2012 than they did the previous year. Pretty impressive work against stiff competition. Although, as bike sales stand up until the end of October this year, Triumph was just edging them out with sales of the 1200 Explorer just sneaking ahead of the Beemer.