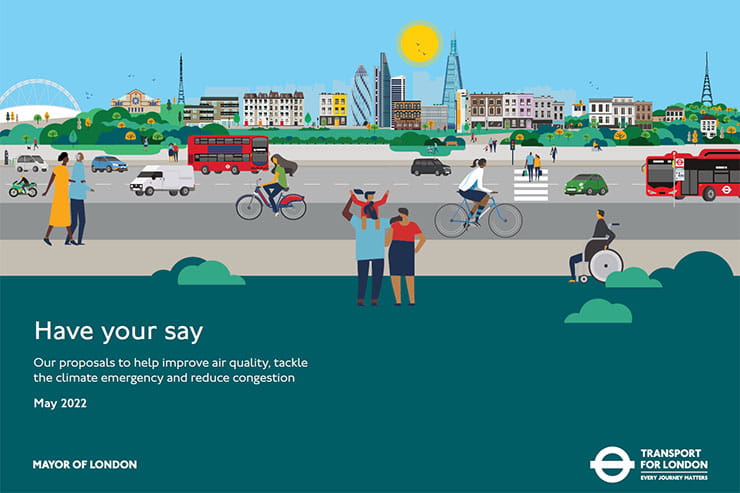 London’s Ultra Low Emissions Zone (ULEZ) is planned to expand massively next August – stretching almost as far as the M25 in all directions and meaning anyone who’s vehicle doesn’t meet prerequisite emissions levels will be charged £12.50 per day when driving within the zone.

Having first been established in 2019, when it only covered the tiny central London area that’s also covered by the Congestion Charge, the ULEZ expanded in 2021 to cover a 380km2 area with boundaries set at the North and South Circular roads. That was 18 times the size of the ULEZ as originally implemented. Under the latest plan, on 29 August 2023 the ULEZ will more than quadruple in size again, covering the whole Greater London Authority area (1569km2). In doing so, it will become nearly 75 times as big as the original 21km2 ULEZ of 2019. What’s more, it will reach far more residential areas including many with lower incomes and hence likely to own older vehicles that are less likely to meet the emissions requirements to avoid the £12.50 daily charge.

Where the current ULEZ zone covers an area with 3.8 million residents, the new one will blanket an area where around 8.9 million people live.

The plans to expand the ULEZ are still under consultation, though, so you’ve got until 29th July 2022 to make your voice heard on the matter.

Go to https://haveyoursay.tfl.gov.uk/cleanair to fill in the survey now.

Although there’s little chance of the expanded ULEZ being stopped, the consultation does raise questions about the introduction of new scrappage schemes to help people move to cleaner vehicles, as well as asking whether the penalty for failing to pay the charge should be increased from £160 to £180 on 30 January next year, and whether the £10 per vehicle administration fee for the Auto Pay system should be removed at the same time. 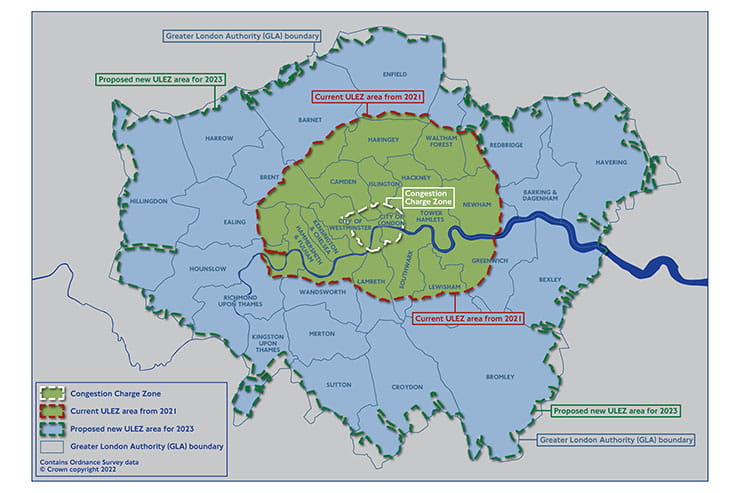 The proposed 2023 expansion of the ULEZ.

The emissions limits for the planned ULEZ expansion are due to be the same as those for the existing area, and whether you’re charged or not depends on what emission limit your vehicle was designed to meet.

To avoid the charge, petrol-powered or petrol hybrid cars must meet at least Euro 4 limits, which were introduced in 2006, while diesel and diesel hybrids need to be Euro 6 compliant, which generally means they’re registered after September 2015. Bikes need to be at least Euro 3 compliant. That standard was implemented on 1st January 2006, so entirely new models launched after that date should avoid the charge. However, there was a grace period for existing bikes sold at that time, so you can’t be certain that your bike is Euro 3 unless it was first registered after 1st July 2007.

For petrol cars, the issue is relatively minor. Cars are typically scrapped at the age of 13 in this country, so most petrol vehicles older than 2006’s cut off have already been crushed into cubes. Diesel drivers have a tougher time thanks to the much more recent, 2015 Euro 6 emissions rules they need to meet, but motorcyclists arguably get the rawest deal of all.

Not only are bikes generally more fuel efficient than cars, so emit less CO2 (as well as other benefits like causing far less congestions, which is a major cause of London’s pollution problems), but the typical motorcycle is well looked after and covers relatively few miles, meaning they live much longer than their four-wheeled equivalents. While a typical car is scrapped at 13, the average motorcycle in the UK is 15.4 years old (so just on the cusp of the 2006-2007 introduction of Euro 3). That means around half of the currently registered, active bikes in the country are older than that, and hence unlikely to have been tested to Euro 3 levels. That means they’ll have to pay the new charge (unless they’re ‘historic vehicles’ over 40 years old, in which case they’re exempt). 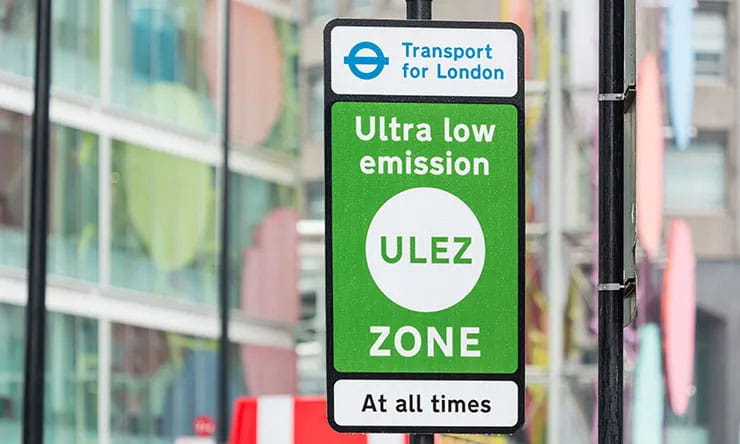 Being test to Euro 3 is the key here, as many bikes that are too old to have been certified to Euro 3 would actually pass the emissions requirements but since they never had to be tested, they don’t carry the right certification.

The ULEZ system work using cameras that read your number plate and cross check with the DVLA records to check the level of NOx (oxides of nitrogen) emissions. While NOx levels have long been recorded for cars, they’ve only been added to the approval of motorcycles relatively recently, so many bikes won’t have an official NOx level on their DVLA record. In those instances, the charge is implemented based on whether the bike was registered before or after Euro 3 was a legal requirement. If it’s after 1st July 2007, it’s Euro 3 so it’s fine. The same bike, if it was registered on 30th June 2007, might be required to pay the daily charge.

You can check your registration here to see if you would be charged under the new plans.

There are ways to prove that your bike emits less NOx than the 0.15g/km limit set in Euro 3, and hence avoid the charge, but it’s not simple and can involve getting a Certificate of Conformity from the manufacturer or even putting the bike through an independent test to prove its emissions, then getting TfL to update its records to show that it’s ULEZ-compliant. We went into detail about how to do that here.

Although it’s clear that work needs to be done to clean up the air, both in the capital and globally, the ULEZ expansion smacks of a scheme that does more to raise revenue than to solve the problem, particularly in fact that bikes aren’t exempt. TfL’s own document setting out the scheme says that cars and goods vehicles are responsible for ‘nearly a quarter’ of London’s CO2 emissions – begging the question about what’s being done about the other three quarters, coming from things like manufacturing and household heating. The same report shows that expanded ULEZ would reduce NOx emissions from all vehicles by only around 5.5%, while carbon emissions from road transport would drop only 0.4% London-wide.

Mayor of London Sadiq Khan said: “The air Londoners breathe is so toxic it stunts children's lungs, exacerbates chronic illness and contributes to thousands of premature deaths each year. More than half of the 500,000 Londoners with asthma live in outer London and all areas of London still breach safe levels of pollution.

“That's why my proposals for expanding the Ultra -Low Emission Zone are the right thing to do. Air pollution is not just a central London issue and Londoners in the outer boroughs should be able to enjoy the clean air benefits the ULEZ brings.

“We're keen to hear from all Londoners, so please share your views on my plans to build a better London for everyone - a safer, fairer, greener and more prosperous city for all Londoners.”