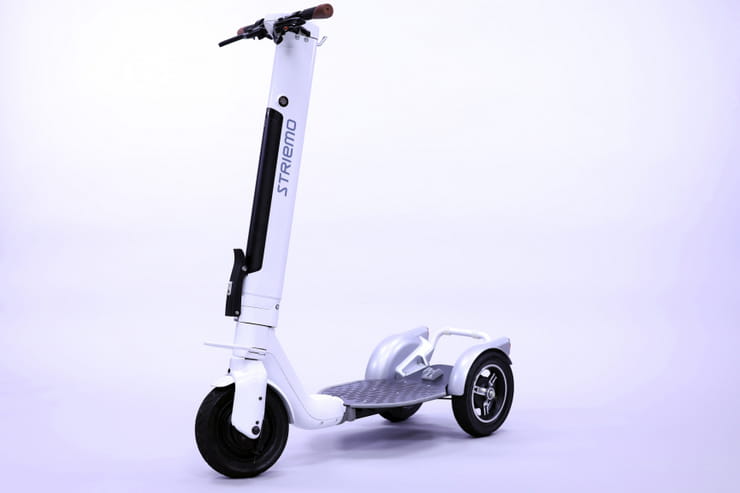 It’s looking increasingly likely that e-scooters will be legalised in the UK when the Government’s next Transport Bill is revealed and while that’s sure to create controversy over safety, licencing and insurance – as well as hammering moped sales – it could open the door to Honda’s latest project getting released in this country.

Honda assisted with the creation of a new startup, Striemo, Inc., to ‘introduce a new value electric micro-mobility product developed through Honda’s Open Innovation’ – or, in simpler terms, a folding three-wheeled e-scooter.

The bike, which also goes by the name ‘Striemo’ is due to go on sale in Japan later this year and will hit some European markets – France and Germany – where e-scooters are legal, in 2023, when it’s also due to reach the USA. With the UK Government currently working on legislation that’s expected to open the market to e-scooters, there’s a good chance we’ll be added to that list once the regulatory framework is in place to accommodate the machine. 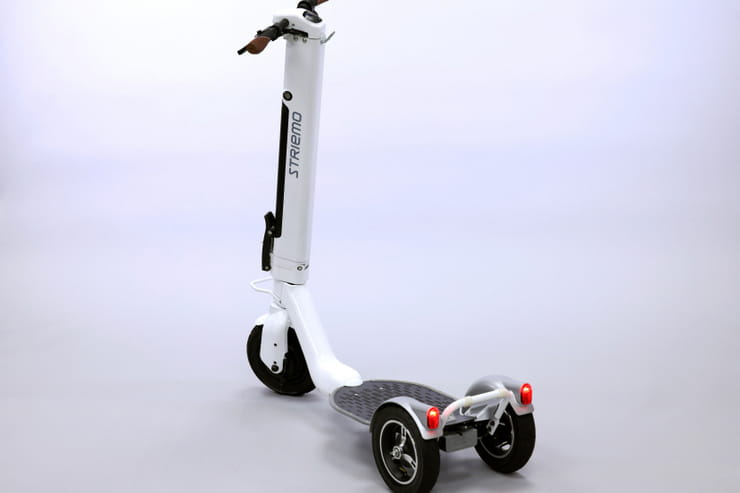 The Striemo itself takes a leaf from Honda’s ‘Gyro’ family of three-wheelers, which have been in production in various forms for more than 40 years. Like those oddball machines, there are two rear wheels and one front, with a swivel section in the middle of the chassis to allow the front wheel to lean into corners, motorcycle-style, while the rears remain upright like a car.

Unlike the Gyro, which has a tilting seat, the stand-up Striemo has a permanently-level surface for your feet. You lean your body into corners, but the standing platform remains horizontal. The intention is to essentially eliminate the need for any skill when it comes to keeping balance.

The bike is powered by an electric motor driving the rear wheels, with a removable, swappable battery that clips into the vertical section that carries the bars. It can also be folded, either to be packed into the boot of a car (like an even smaller version of the old Motocompo) or for storage. When folded it can also stand on its tail to take up the least possible space, and there’s a carry handle on the front to lug it around. 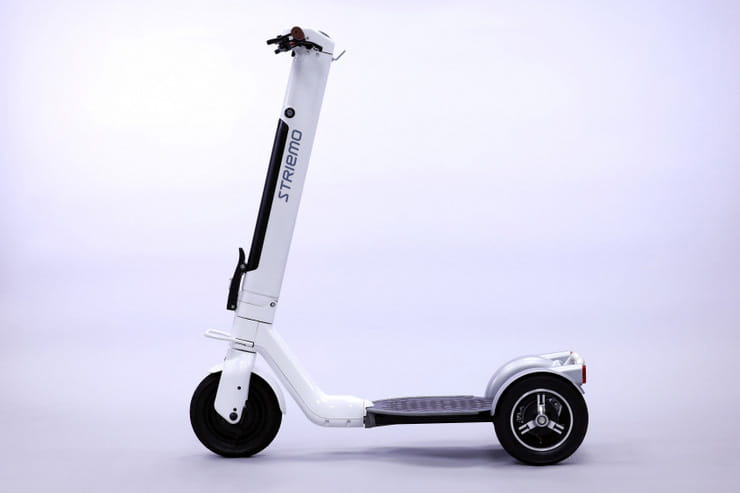 Striemo is the second start-up company from Honda’s ‘Ignition’ project to create new businesses, where Honda employees in Japan are encouraged to submit ideas to be commercialised with venture capital support from Honda. The first, in 2021, was Ashirase, Inc., which makes a haptic, smartphone-based navigation system attached to shoes to assist visually impaired people get around on foot.

Yotaro Mori, co-founder and CEO of Striemo, Inc., is a former Honda motorcycle development engineer. He said: “Striemo is a new mobility product developed while leveraging know-how in the area of human studies, which I amassed through my experience in the development of motorcycles at Honda. My goal is to make Striemo one of the most commonly used mobility products in people’s everyday lives around the world and create a better world where people enjoy the freedom of mobility.”

E-scooters look likely to become a hot topic in the UK in the coming months. The Government announced plans for a new Transport Bill in the recent Queen’s Speech, and it’s widely expected to include provisions for e-scooter use nationwide. At the moment, privately-owned e-scooters can’t be used either on the road or on pavements, but there are more than 30 trial schemes around the country for rental e-scooters, which can be used on roads by holders of full or provisional driving licences. It’s a situation that’s led to inevitable confusion: people see the rented scooters – which can only be used within agreed areas – and incorrectly think that since they’re allowed, private e-scooters are also legal.

The upcoming Transport Bill is expected to include rules to widen the use of e-scooters, but it’s not clear whether it will simply expand the e-scooter hire schemes or legalise private e-scooters by creating a set of clearly defined rules about the machines’ performance, who can or can’t use them and where and how they can be used. 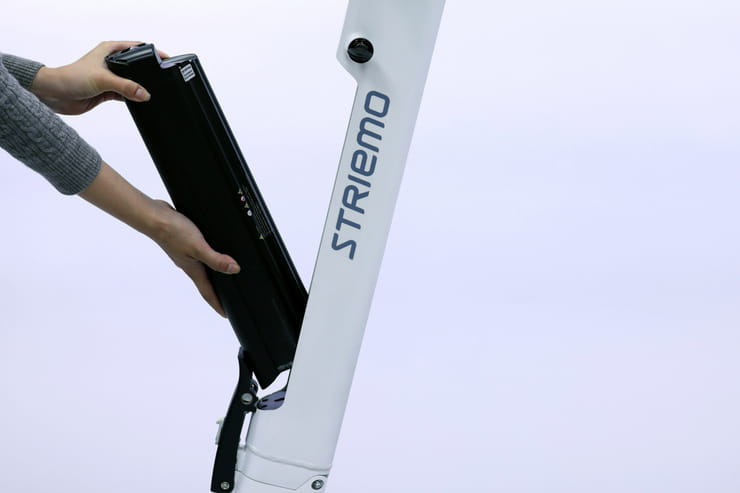 If the Government opts to create new legislation allowing private e-scooters to be used on the road, it will open the door to bikes like the Striemo and the more complex Yamaha Tritown, with bicycle-like performance and ‘last mile’ range.

Striemo’s machine is much simpler than the Yamaha, which uses a Niken-style tilting three-wheel setup, helping keep weight down to around 20kg. Top speed is rated at 25km/h (15.5mph), with three riding modes – a 6km/h (3.7mph) ‘walking’ mode, a 15km/h (9.3mph) middle mode and the full 25km/h (15.5mph) setting. Range is 30km (18.6 miles), with a full charge taking 3.5 hours. The price hasn’t been announced, but initial Japanese orders are being taken via a lottery system, where winning applicants will be selected at random, between now and July 31.

The expected change in UK law that would allow the Striemo and other, more conventional e-scooters on the road would be a blow to moped sales, which have already shrunk enormously with the advent of electrically assisted pushbikes that can be ridden on UK roads without the need for a licence, road tax, helmets or insurance. Those four elements are sure to be big talking points for the introduction of e-scooters, too, particularly given the significant rise in e-scooter casualties since the introduction of widespread trial schemes.

Last year there were a total of 1,359 reported casualties from e-scooter accidents, 38% of them (510) in the Metropolitan Police area, where several trials are underway. There, they accounted for nearly 2% of all road casualties. During the year, there were 9 deaths, 390 serious injuries and 960 slight injuries involving e-scooter collisions nationwide. Of the injuries themselves, 1034 were to the e-scooter user themselves, 223 were pedestrians, 64 were cyclists, 14 were motorcyclists and the remaining 24 were in cars or other vehicles. 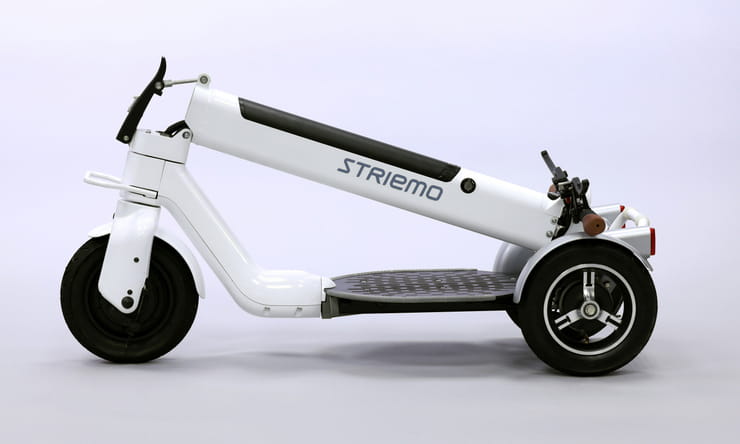