Fuel crime leading to more ‘no helmets’ rule for motorcycles 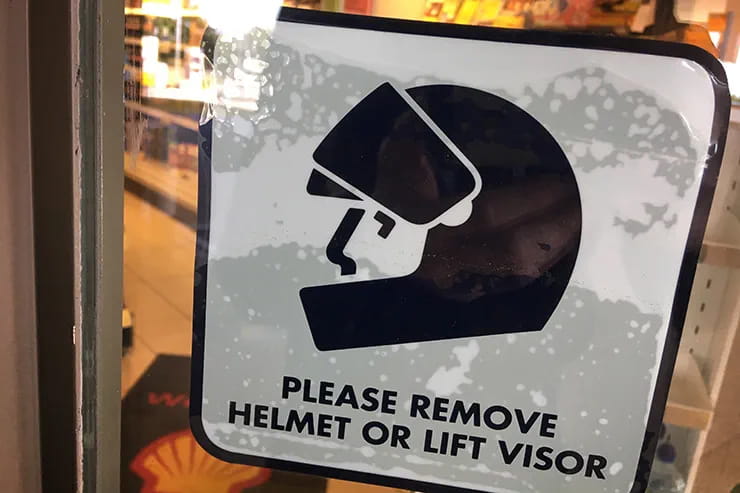 Next time you fill your motorcycle with petrol you might get a nasty surprise beyond the sheer size of the bill: an increase in ‘drive-off’ crime means you’re more likely than ever to be asked to remove your helmet at the pumps.

Taking your lid off when refuelling has long been a contentious point for many riders. It’s inconvenient and increases the chances of dropping and damaging an expensive helmet as you either balance it on your bike or try to juggle helmet, fuel nozzle and keys to open the fuel cap.

There’s no standard policy among petrol stations: some are fine with helmets, some ask you to remove them before entering the kiosk, and some won’t even switch on the pumps until your helmet’s off, but numbers in that last group are set to rise thanks to a worrying increase in ‘drive-off’ crime, sparked by the cost-of-living crisis and record high fuel prices.

Fuel prices leading to demands to take off motorcycle helmets

The latest Government figures for average fuel prices across the country put a litre of unleaded at 175.55p during the first week of June. That up nearly 14p in the last month alone and compares to a low of 104.87p per litre about two years ago, when crude oil prices hit rock bottom during pandemic lockdowns. And if you’re using Super Unleaded to avoid E10, you can expect to pay over £2 per litre at some stations.

Combined with rising inflation and interest rates pushing up costs in all areas of life, the prices mean it’s more tempting than ever for drivers to scarper without paying for a tankful.

The British Oil Security Syndicate (BOSS) – a scheme that helps filling stations recover the debts from forecourt crime – has reported that in the first week of June 2022, incidents of unpaid fuel have increased by an astounding 22% compared to a month earlier. That comes on the back of a steady increase of around 5% per month before that.

Clair Nichol, BOSS Executive Director, said: “Average fuel prices have risen by 19% since January 2022 and there is no doubt that there is a link between rising fuel prices and increased incidents of forecourt fuel crime.”

Between January and March, incidents of unpaid fuel increased by 14.6% as fuel prices rose 10.5%.

Another organisation that aims to recover payments for drive-offs is Forecourt Eye, which works with around 1,000 filling stations around the UK; it’s reported a 39% increase in non-payment between January and May. 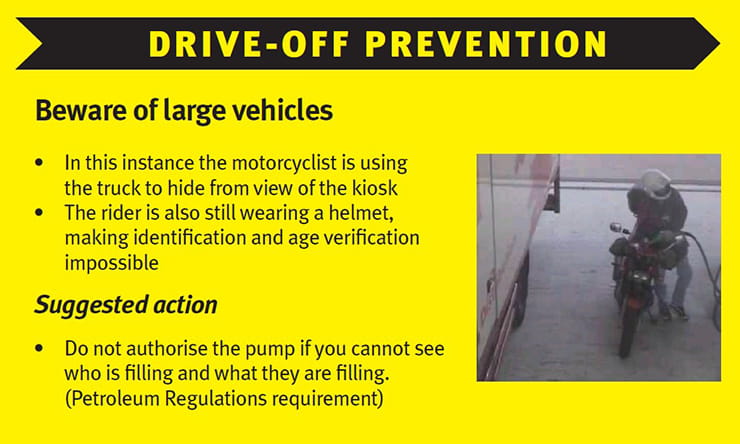 It’s NOT all drive-off’s; many are unable to pay

Although the figures might suggest a crimewave, it’s worth noting that most of these unpaid fuel bills are in the form of people being unable to pay rather than intentionally driving away without making any attempt at settling up. Nichol said: “Motorists claiming to have no means of payment account for 70% of incidents, which re-emphasises a shift away from Drive-Off incidents.”

Even so, as filling stations try to mitigate the problem, we’re likely to see an increasing number calling for riders to remove their helmets. BOSS’s own leaflet on drive-off prevention – telling filling stations how to prevent fuel theft – suggests that pumps shouldn’t be turned on if a motorcyclist is either trying to fill up while hidden from view behind a larger vehicle, or if they haven’t removed their helmet to make identification easier.

‘Bikers not removing their crash helmets’ is among the organization’s list of common signs that a drive-off might take place. 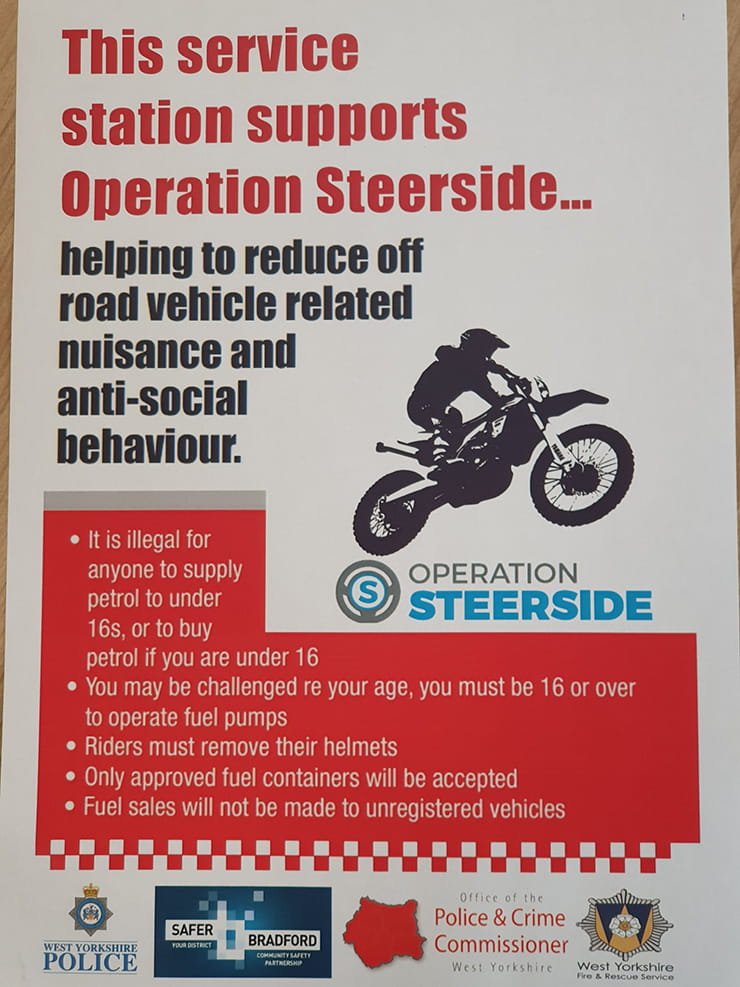 In some areas, police are also getting behind the idea of helmet removal while filling up. Last week, West Yorkshire Police launched ‘Garage Watch’ in Shipley, a ‘multi-agency partnership that involves West Yorkshire Police, West Yorkshire Fire & Rescue Service and Bradford Council’ and asks all filling stations in the area to “Require the removal of helmets, masks, scarves or anything obscuring the person’s identity while on the forecourt.”

In this case, the reason isn’t drive-offs due to high fuel prices, but a spike in the illegal use of off-road bikes and quads on the road, often by underage, unlicenced and uninsured riders. Here, the intention is to be able to see the rider’s face and to judge whether they’re over 16 – the legal minimum for buying petrol. The filling station itself would be breaking the law if it supplied fuel to anyone under the age of 16.

West Yorkshire Police say that if the scheme is successful in Shipley it will be rolled out to other areas, and our recent article about being asked to remove your helmet explained a lot more here. 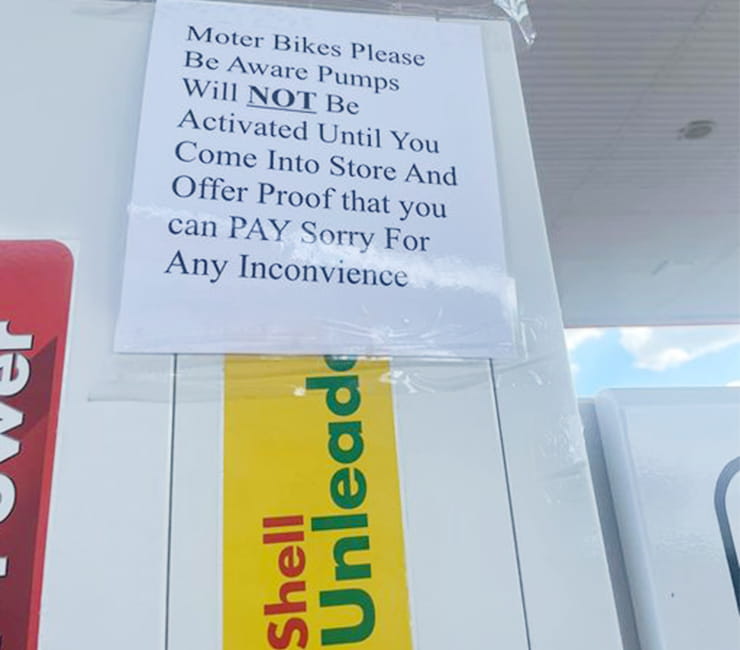 Thanks to Daniel Storey for allowing us to use this picture, which he took in Gravesend

Is it discrimination to be asked to remove your helmet?

In short, no, it’s not discrimination to be refused fuel unless you remove your helmet. Although it might feel like you’re being singled out and asked to do something inconvenient that car drivers don’t have to do, petrol stations are well within their rights to ask you to take your lid off.

Discrimination laws in the UK only apply to ‘protected characteristics’, which are things like age, sex, pregnancy, race, religion or sexual orientation. In the case of religion that might include the right to a face covering for some people, but that doesn’t mean everyone has a right to hide their face at all times.

Besides, as we explained here, by removing your helmet at the pump you might actually be doing something to help reduce crime, including motorcycle theft. Many garages work with police, supplying CCTV footage to help solve crimes, and if the cops want to get a look the face of a motorcycle thief there’s rarely a better opportunity than when they’re caught on camera filling up.

So, while you might find that instances of being asked to remove your helmet at the pumps increase in this era of insane fuel prices, remember it’s not you they’re targeting, but the people who make life worse for all of us.