New for 22: Indian Pursuit is firm’s most advanced tourer yet 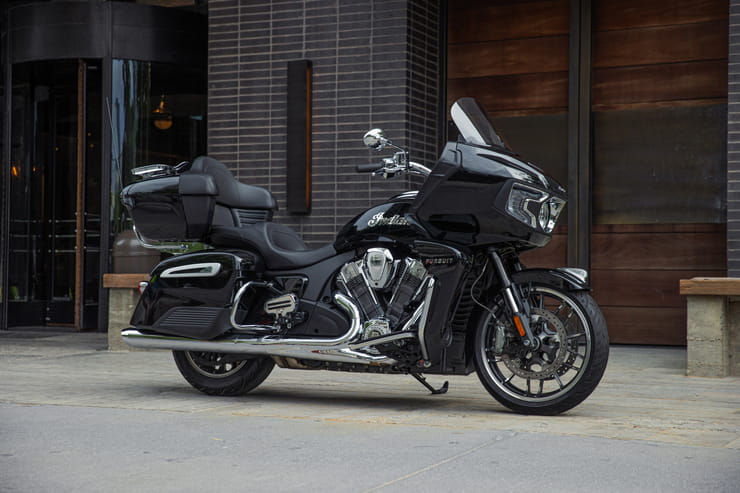 Last month we were first to reveal details of Indian’s then-secret Pursuit tourer – and now it’s all out in the open after the firm officially took the wraps off the most technically advanced tourer in its history.

While it’s been an open secret that Indian has been developing a machine called the Pursuit and based on the bones of its water-cooled Challenger for some time, that ‘Pursuit’ name goaded many into believing it might be a higher-performance version. Instead, as BikeSocial predicted, it’s a full tourer; the word ‘Pursuit’ is being used here under its definition as a leisure recreation, rather than as a high-speed chase.

Not that the Pursuit will be low performance by any means. It packs the same 121hp PowerPlus V-twin that debuted in the Challenger, clocking in at 1768cc and making a substantial 131lb-ft of torque. This is no screamer; the power peaks at only 5500rpm and max torque is at your disposal right down at 3800rpm. 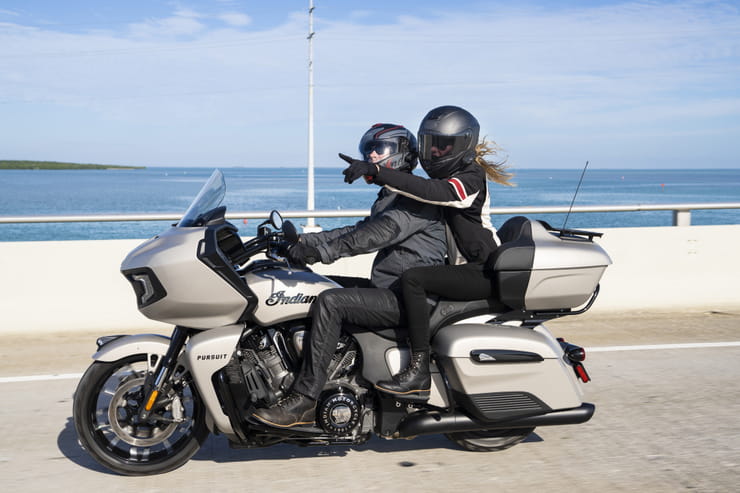 While those figures are the same as those produced by the Challenger, Indian says the Pursuit has a ‘refined’ calibration that improves low-speed drivability.

The engine itself is an overhead cam, four-valve-per-cylinder, water-cooled V-twin; leagues away from the air-cooled, pushrod design used in Indian’s Roadmaster. Despite being a smaller-capacity engine than the Roadmaster’s 1890cc Thunderstroke, the Pursuit has fractionally more torque and far more power. It also features rear cylinder deactivation to reduce heat soak and improve economy.

The PowerPlus engine might be more complex, but it’s no more hassle than the pushrod Thunderstroke, with car-like features including hydraulic tappets and cam chain tensioners to cut down on maintenance.

As you’d expect from a modern bike, there’s a trio of riding modes – Rain, Standard and Sport – that alter the IMU-assisted traction control settings and throttle response. 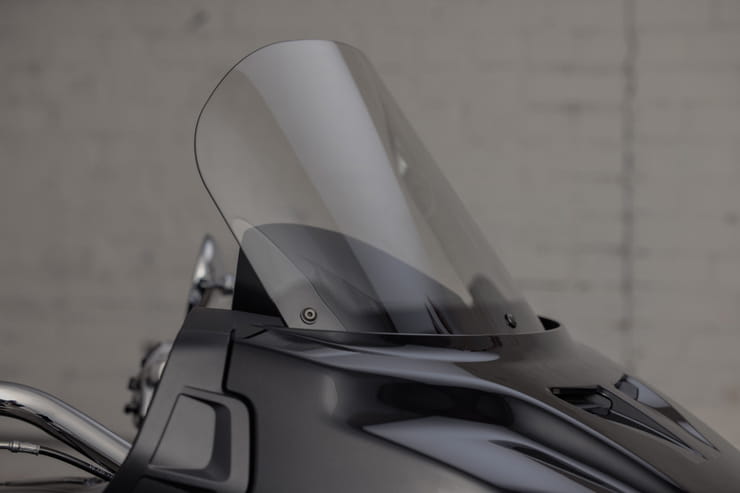 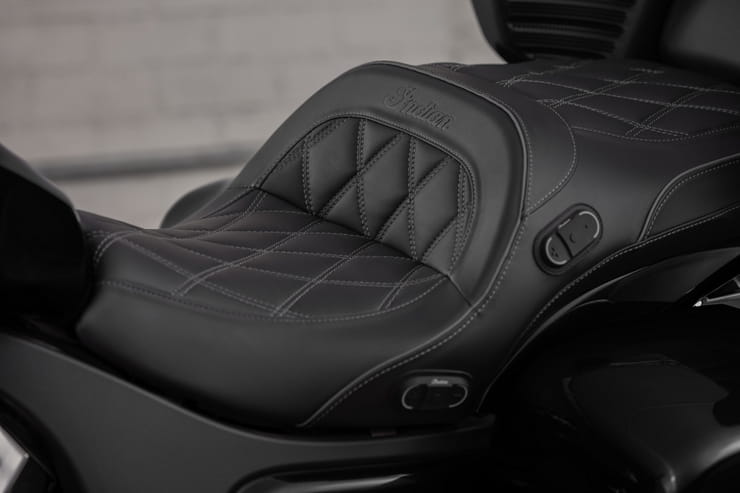 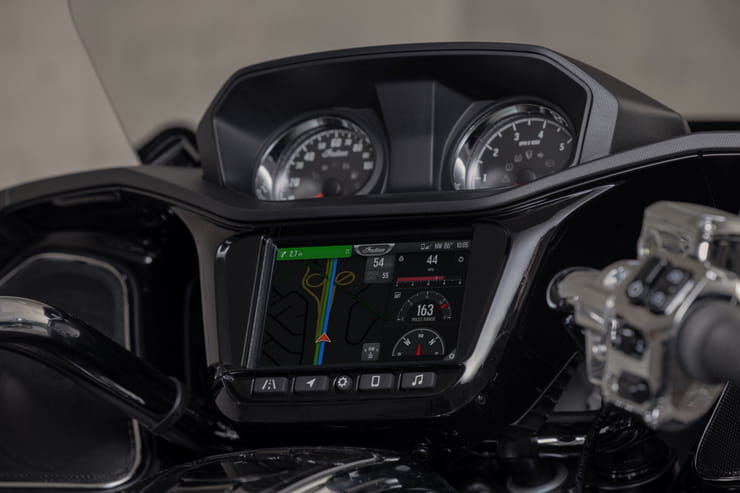 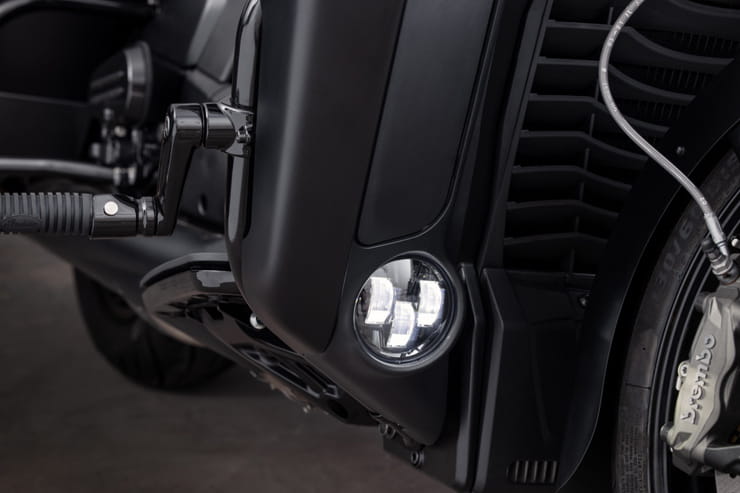 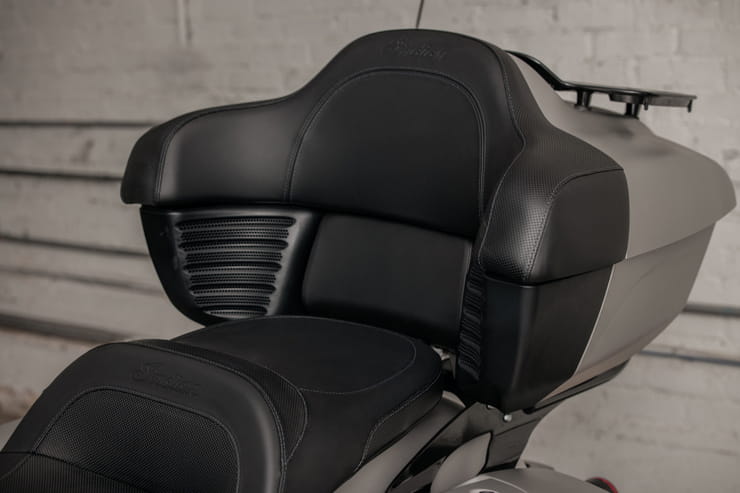 From the front you’d be hard pushed to tell the difference between the Pursuit and the Challenger it’s derived from. Both bikes share the same nose fairing – mounted to the frame rather than the bars – and the same distinctive headlight. However, the Pursuit adds a taller, adjustable screen and a pair of lower fairing sections in front of the rider’s legs, the latter incorporating additional, low-level driving lights.

Further back, the differences become more obvious with the deep, quilted seat, which is heated – as are the grips – as standard. Behind it sits a top box, doubling as a pillion backrest and bumping the bike’s storage capacity up to an impressive 133 litres in total, up from 68 litres on the Challenger. All that storage is remotely lockable.

With the ability to carry more weight, the Pursuit gains new electrically adjustable Fox rear suspension, letting you adjust the rear preload from the infotainment system’s 7-inch touchscreen display. That infotainment also incorporates GPS, a host of information about the bike including tyre pressure readouts, and Apple Carplay, and it’s tied in to a 200-watt audio system. 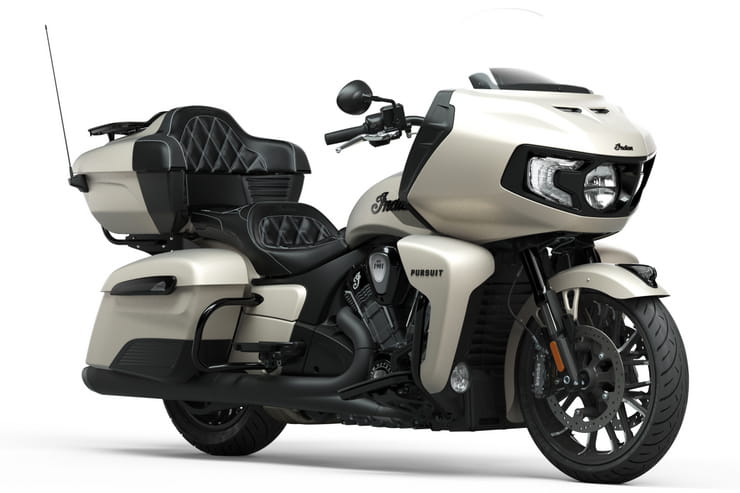 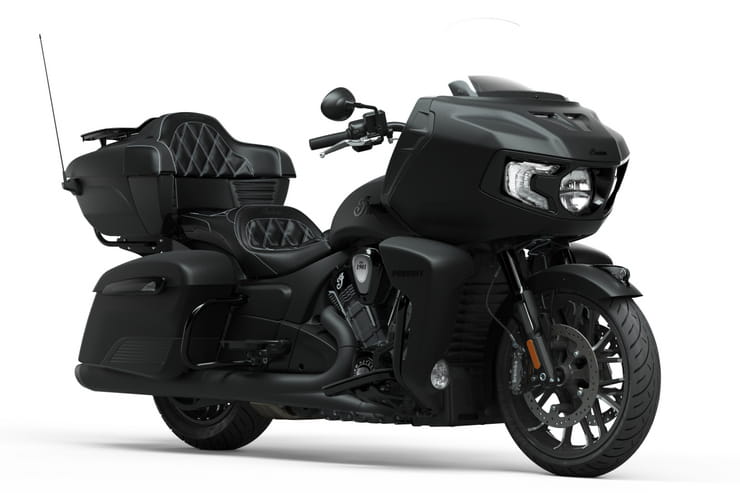 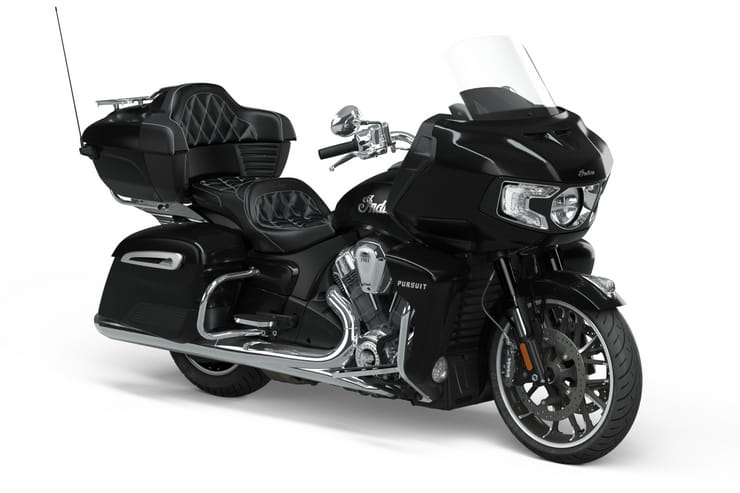 As expected, there are two versions of the Pursuit on offer – the Pursuit Dark Horse and Pursuit Limited. Spec-wise there’s little between them, both coming as standard with a ‘Premium Package’ of equipment, but cosmetically the Limited gets a chrome finish on the engine, exhausts and crash bars, as well as the luggage rack, bars and mirrors, plus machined alloy edges to the wheel rims. The Dark Horse, meanwhile, is murdered out with all those components finished in either matte or gloss black. Both versions come in black, while the Limited can also be had in ‘Alumina Jade’ and the Dark Horse has alternative options of silver or grey.

Of course, all that is before options are added – the list is extensive, and includes alternative bars, adaptive LED lighting, soft luggage, additional storage inside the lower fairings and, of course, uprated audio that puts speakers in the fairing, fairing lowers, saddlebags and top box.

Mike Dougherty, Indian Motorcycle President, said: “Touring bikes are one of the ultimate expressions of freedom – enabling unforgettable experiences through longer escapes and epic adventures on the open road. With Pursuit, we’ve expanded on the unparalleled sophistication of the PowerPlus motor to deliver a class-leading, fully-loaded touring machine that combines top-tier performance with unparalleled comfort and advanced tech features, delivering an American V-twin touring experience unlike any other.” 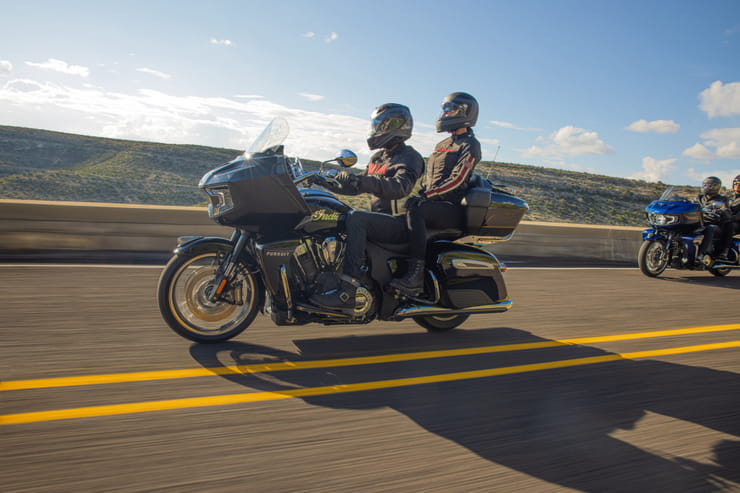