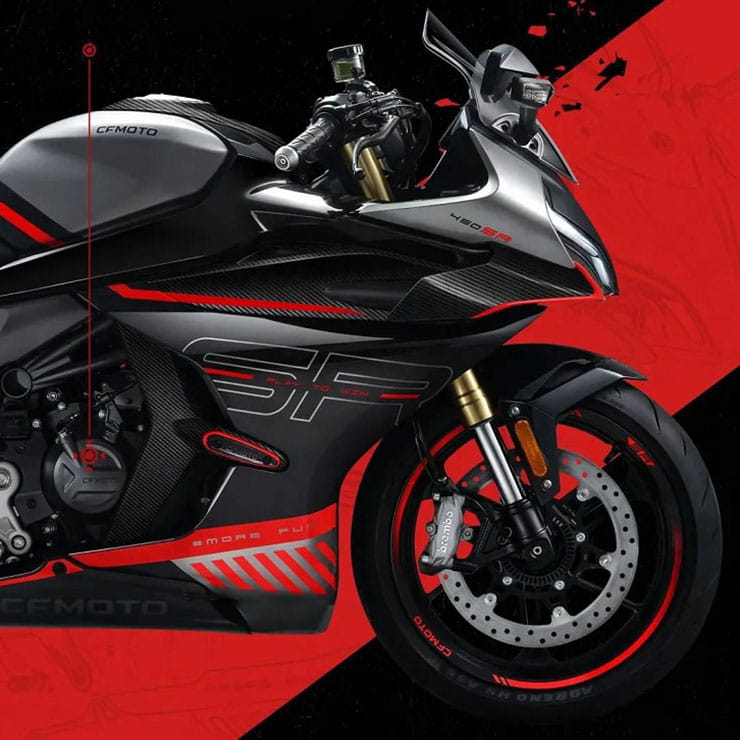 Last month we scooped the first picture of the showroom version of CFMoto's 450SR sportsbike and now the company has officially revealed the machine in China with some surprisingly high-end specifications.

While a 450cc parallel twin is never going to offer superbike levels of performance, the 450SR's bare figures are impressive for a machine of its size. CFMoto's official announcement shows that our predictions of a 50hp (37Kw) power peak and 168kg wet weight were on the money. Those numbers are bolstered by 39Nm of torque.

The bike's 450cc engine appears to be completely unrelated to the 400cc twin used in the existing CFMoto 400NK, with a more compact, lightweight design than the current engine, which is effectively a sleeved-down version of the company's larger 650 twin. Unusually for a relatively small-capacity twin, and in a break with CFMoto's usual practice, the new bike's engine has a 270-degree crank to give an offbeat firing interval that mimics a 90-degree V-twin. The company's other parallel twin engines use an evenly spaced 180-degree crank. That V-twin-like throb should endow the 450SR with an injection of character. 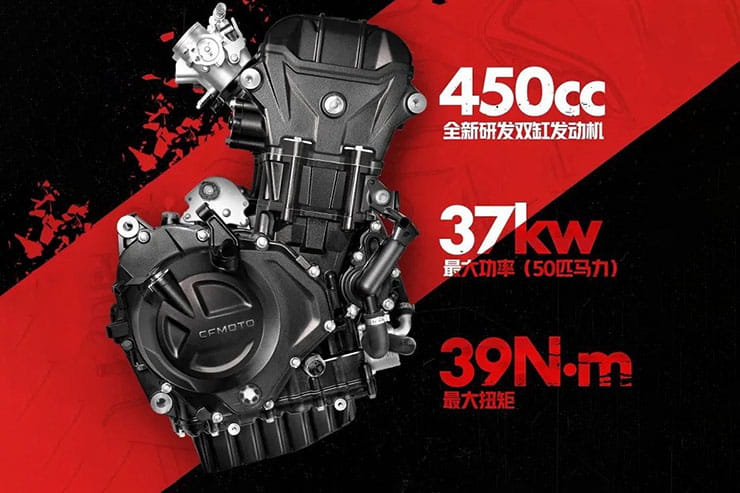 The 450SR was previewed in last year's SR-C21 concept bike, but CFMoto remained quiet on that machine's specs. The styling is carried over virtually untouched other than the addition of mirrors, a pillion pad, larger headlights underneath the LED running light strips and a single, low-mounted exhaust instead of the twin, high, SC-Project cans of the concept.

Mechanically, the concept's single-sided swingarm has been switched for a cheaper, lighter dual-sided design – a single-sider might well return on a later, higher-spec 'SR-R' version of the bike – and the rest of the suspension and brakes have been downgraded to suit the 450SR's relatively low cost. In China, there's currently a pre-order price of 31,980 Yuan, which is less than £4000, with deliveries expected to start in July – although the price will rise once the pre-order period comes to an end.

While the concept's race-spec dual Brembo front brakes are replaced with a single disc, the 450SR still uses a Brembo radial caliper and Bosch ABS. The front disc is 320mm, with a 220mm disc at the back. There's no word yet on the origin of the suspension parts, but given the bike's low price it's safe to say they're not the same high-end Öhlins parts that featured on the SR-C21 concept. 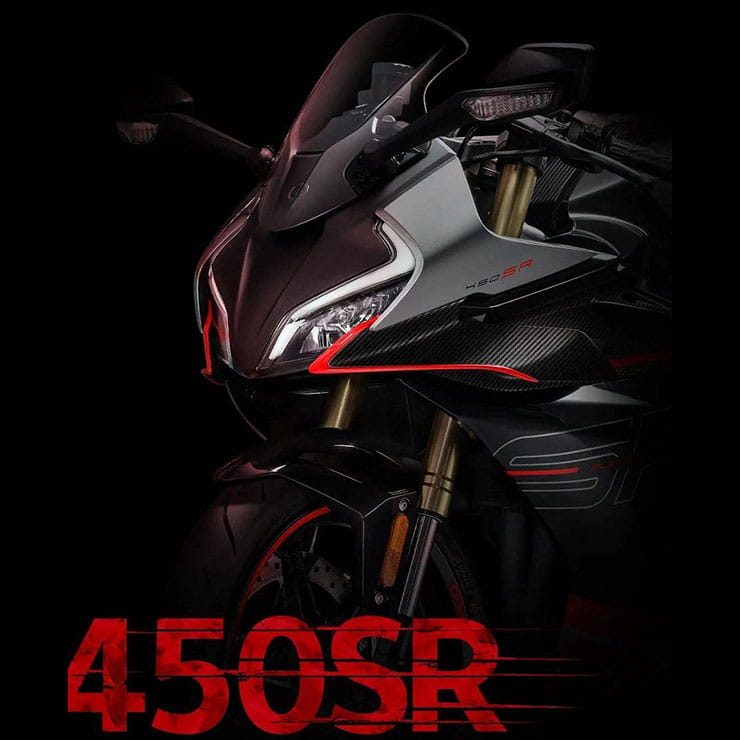 The bodywork, designed in Italy by Modena 40 in Rimini, is claimed to be wind tunnel tested, so those winglets on either side of the nose are functional rather than just aesthetic. CFMoto says they add 2kg of downforce at 75mph. Three different seat heights will be offered – 785mm, 795mm and 815mm.

Although there's currently no word on the 450SR's availability outside China, the bike is very likely to be offered globally. Over here, the high power-to-weight ratio achieved by CFMoto's stated aim of combining the performance of a 500cc twin with the weight of a 250cc bike means that it will be too light and powerful to meet A2 licence rules. Not only do A2 limits restrict maximum power to 47hp, 3hp down on the 450SR's maximum, but they require bikes to have a power-to-weight ratio below 0.2kW per kg. The 450SR's low mass means its power-to-weight ratio is 0.22kW/kg, so power would have to be reduced to around 45hp to meet A2 licence limits.