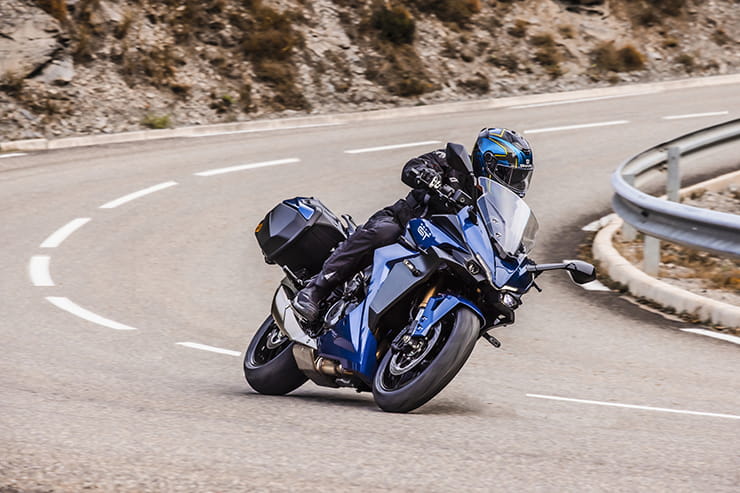 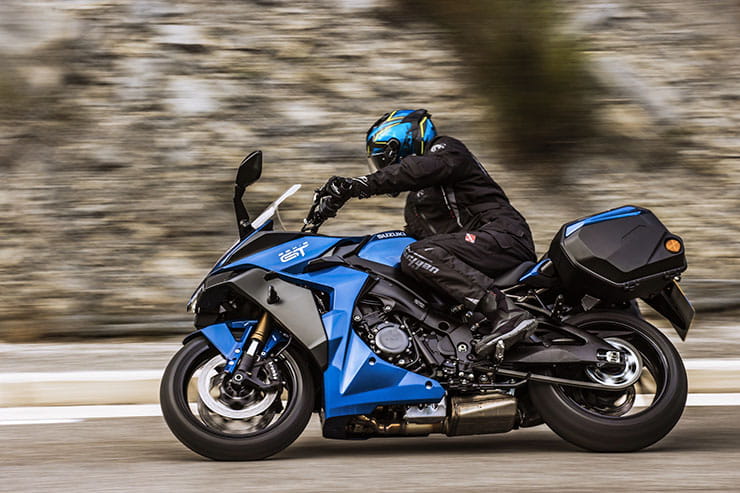 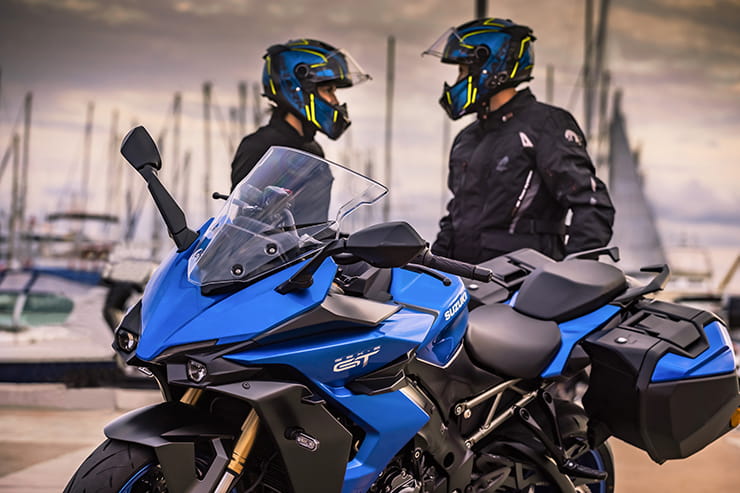 Back in June, we broke the news that Suzuki was planning to launch a new GSX-S1000-based sports tourer to replace the awkward-looking GSX-S1000F. Now it’s here and while the styling won’t be to everyone’s taste, the result is a machine that offers a combination of price, performance, practicality and equipment that looks hard to beat.

When we broke the story, we called the bike the GSX-S1000T, which is the name it goes under internally, but the official title is GSX-S1000GT. Other than that detail, though, our original story checks out, right down to the dimensions and weights.

As a package, the GSX-S1000GT might be based on a combination of existing components under a new skin, but Suzuki – lacking the vast R&D budget of some of its Japanese rivals – has repeatedly proved adept at such recycling jobs. Just look at the Katana or the V-Strom 1050 to see how effective a judicious reworking of off-the-shelf parts can be, even when competing against rival clean-sheet designs. 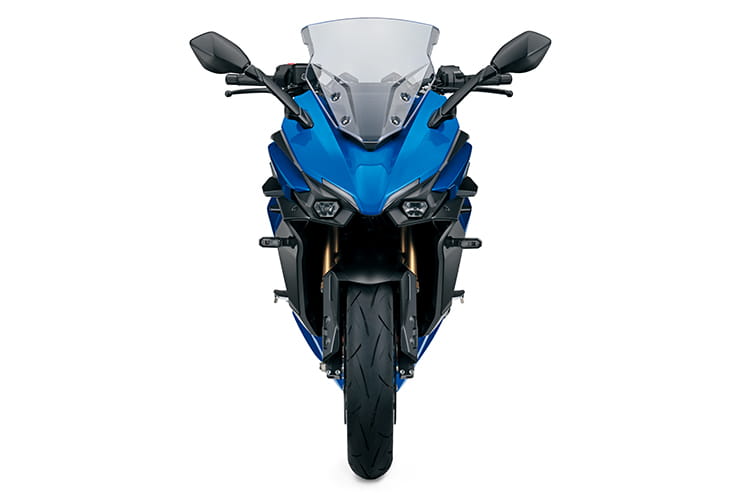 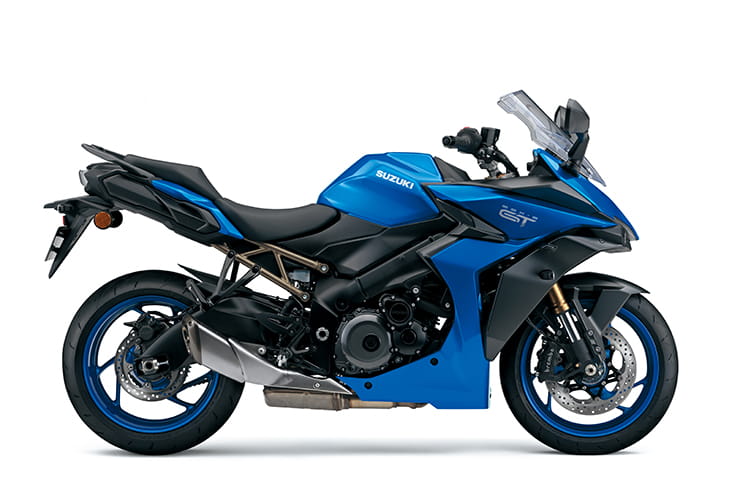 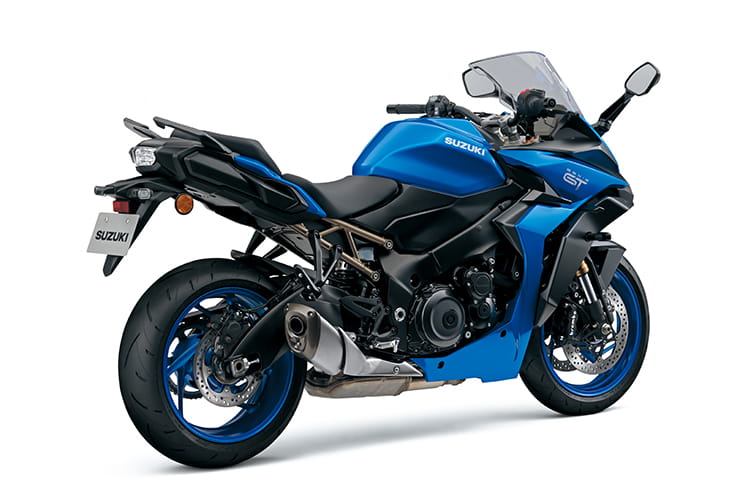 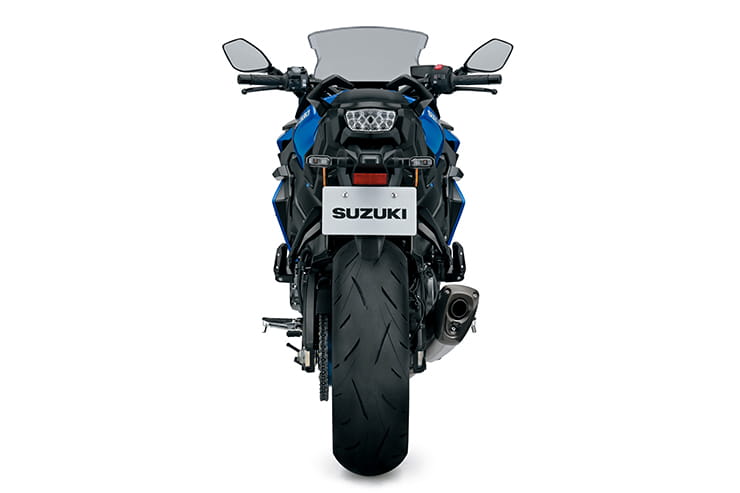 It’s not like Suzuki is trying to turn a sow’s ear into a silk purse. The GSX-S1000F might not have had the most cutting-edge suspension or electronics, and the styling was never likely to set pulses racing, but it was formed around one of the all-time great superbike engines – the GSX-R1000 K5 unit – and as the years went on and rivals became ever more expensive, its price became increasing attractive. With the new GSX-S1000GT, Suzuki is addressing at least some of those issues, while doing well to keep the price from spiralling out of reach. 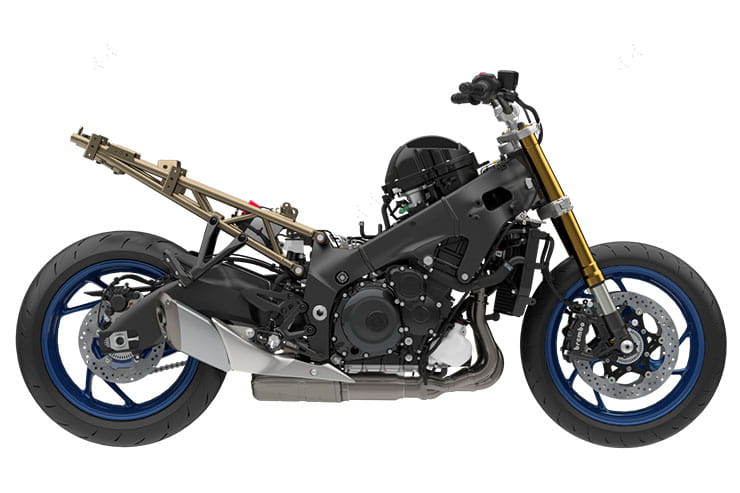 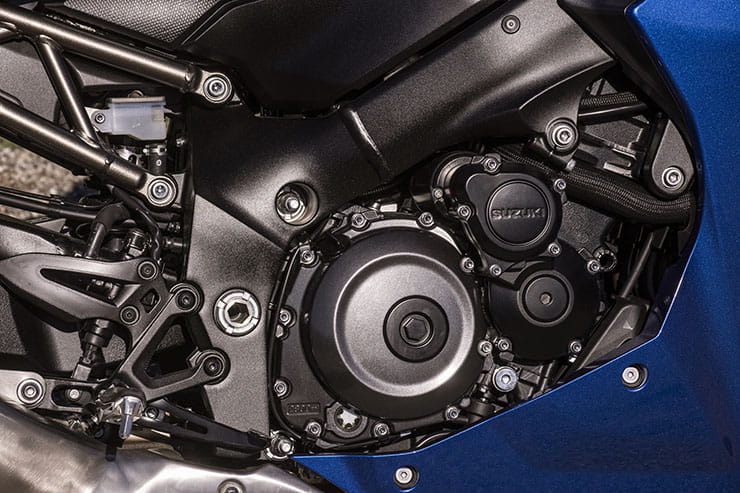 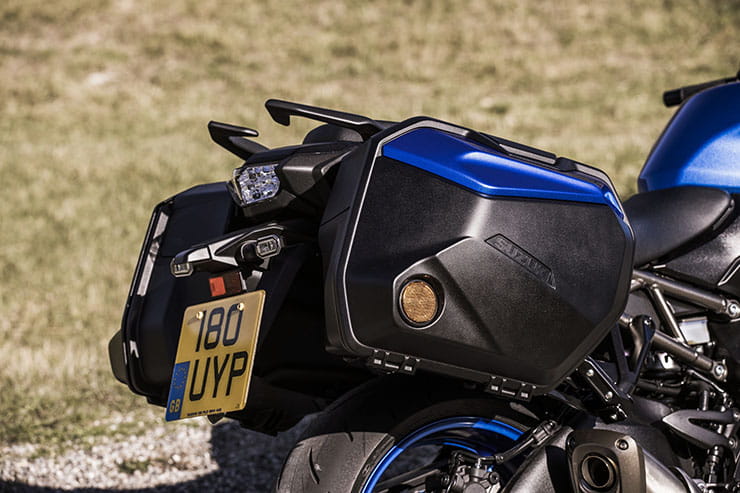 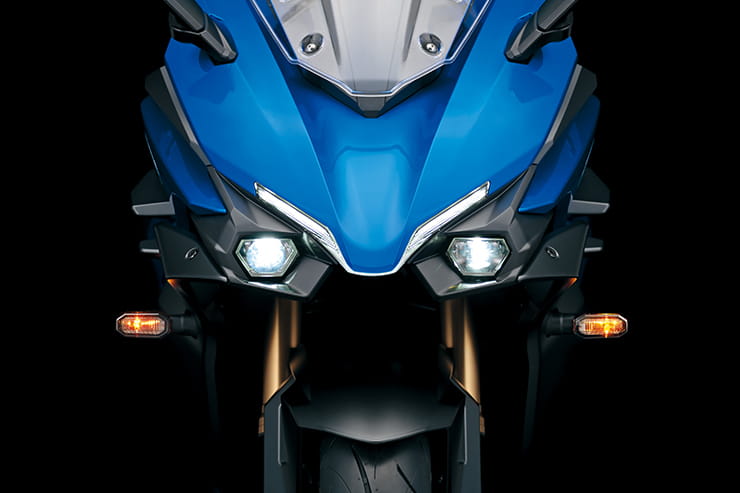 Unsurprisingly, the bike’s main parts are shared with the latest GSX-S1000S, and, in turn, inherited from the previous generation. The chassis and engine are straight from the naked bike, with 152PS (150hp) at 11,000rpm and 106Nm (78lbft) at 9250rpm, a twin spar alloy frame, fully adjustable 43mm KYB forks and Brembo Monobloc radial calipers. Basically, stuff that wouldn’t have shamed a superbike a few years ago. At 226kg ready-to-ride it’s 9kg lighter than the Kawasaki Ninja 1000SX and by no means hefty, although that number is 12kg up on the old GSX-S1000F.

Moving away from the carried-over parts, the GSX-S1000GT gets its own dedicated new seat subframe, sitting below a much longer seat unit than that of the GSX-S1000, equipped with mounting points for the optional luggage that most buyers will surely opt for. Ahead of it, the tank is the same, but the GT gains a distinctive-looking full fairing that adopts the sort of angular, chiselled style that the naked GSX-S1000 introduced for 2021. It’s probably too complicated-looking to be called pretty, but it’s unlikely to be mistaken for many other bikes, with notable touches including unusually small LED headlights mounted right near the tip of the nose, beneath eyebrow-style running lights. 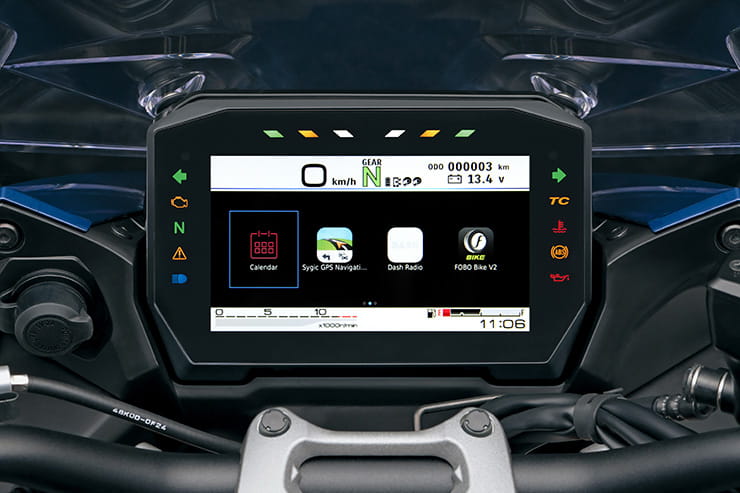 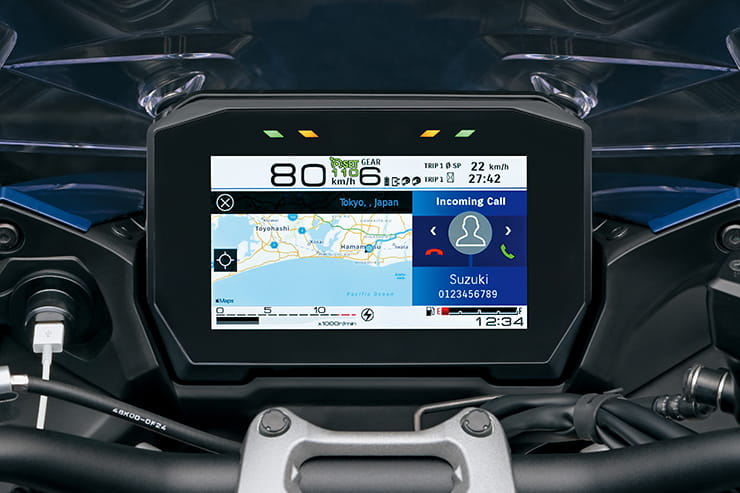 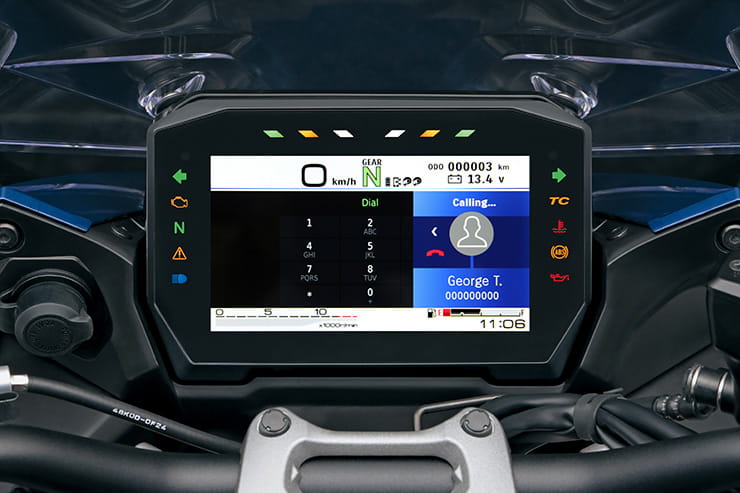 The bones of the GSX-S1000GT might be getting on a bit, but there’s a veneer of high-tech for the new model that means buyers won’t be missing out on the latest gadgets.

As you’d expect, there’s ride-by-wire, with the associated choice of riding modes altering throttle response and power delivery, plus a five-mode traction control system and cruise-control. On top of those gizmos, you get a bi-directional quickshifter, low RPM assist to help prevent stalls, and an ‘easy-start’ one-touch starter button.

TFT instruments are becoming the norm these days, and the GSX-S1000GT is no exception, with a display that’s a quantum leap forward from the old GSX-S1000F, which had the sort of grey-on-grey LCD that conjures images of 1980s Casio watches. The new 6.5" design, with an adjacent USB socket, allows smartphone connectivity, giving control over contacts, phone and music, along with proper map-based navigation. It will even show your calendar. 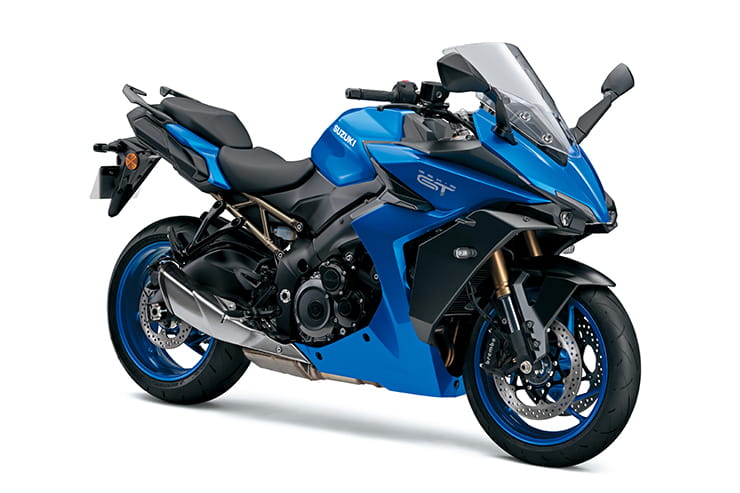 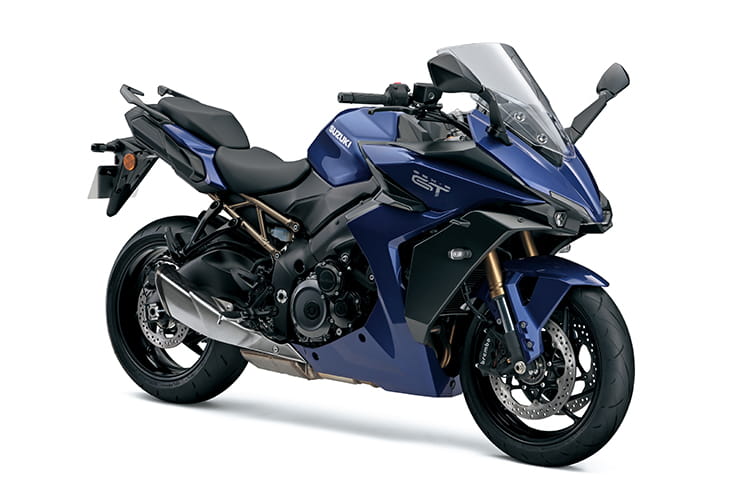 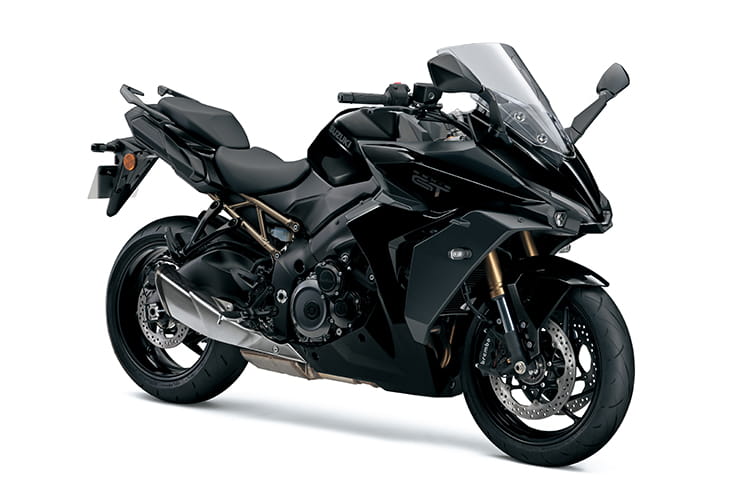 Of course, there are plenty of accessories on offer as well, including carbon fenders and engine covers, a touring windscreen that’s 70mm taller than the stock version and – most importantly – a set of matching luggage to give 36 litres of storage space. Those panniers come in the same three colour options as the bike itself; Suzuki’s ‘Triton’ blue (as used on the GP bikes), a darker metallic blue, or black. Each case is big enough to swallow a full-face helmet.

While the market for traditional sports-tourers isn’t nearly as strong as that for adventure-style bikes, there’s no denying that this style of machine offers a great compromise between performance and practicality. Combined with the GSX-S1000GT’s reasonable price – which will no doubt be bolstered by a variety of purchase options when it reaches dealers in November – the bike has the makings of a success for Suzuki. 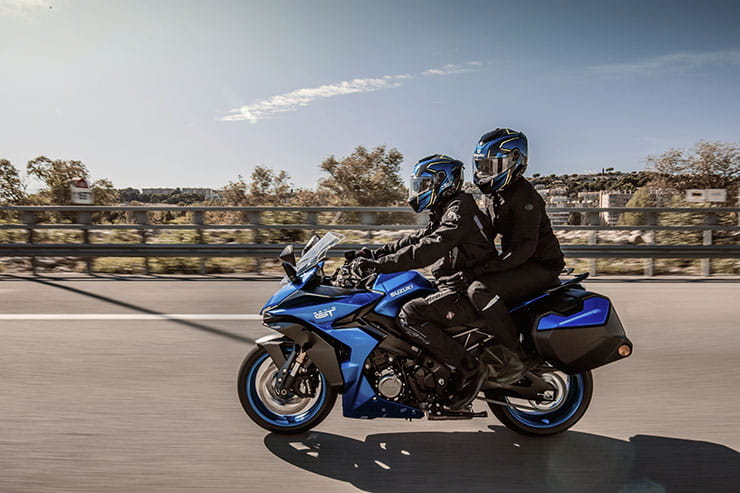 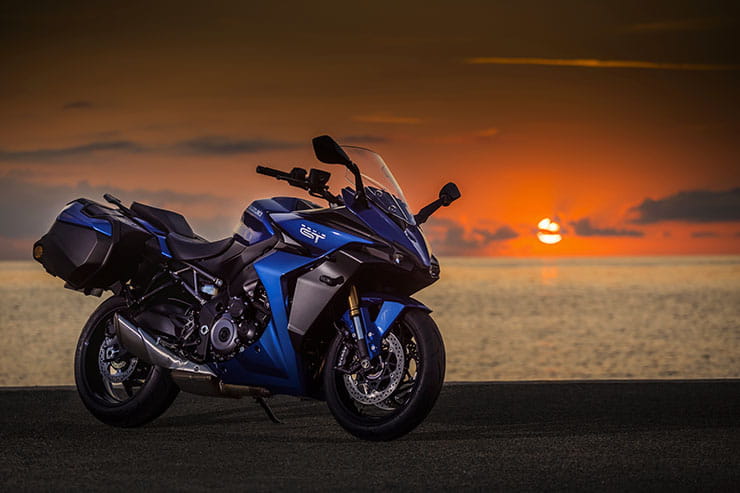 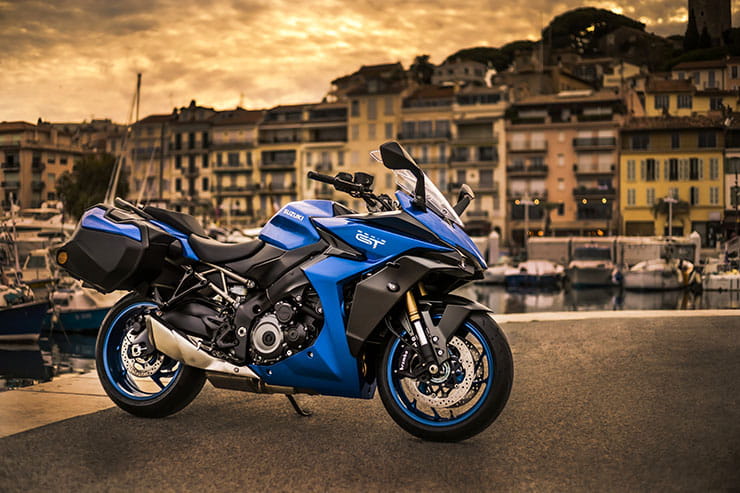