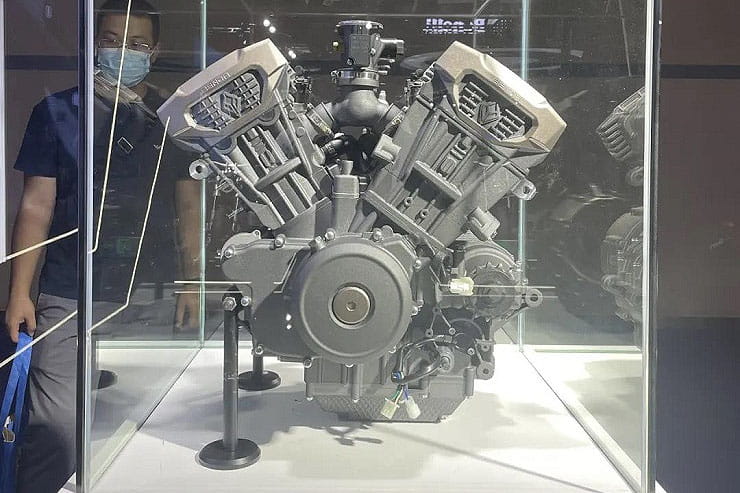 Few companies have been as surprising over the past year or so as Benda. At the start of 2020 it was an unremarkable brand among dozens of similar Chinese companies turning out 400cc twins but in since then it’s become one of the most interesting bike brands out there – and now it’s unveiled a duo of V4 engines to power new models that will appear in 2022.

The first hint at Benda’s future came when the company patented designs for an inline four power cruiser in summer 2020. That bike was unveiled last September as the LF-01 concept, which was confirmed as a planned production model in January this year and is now rolling off the lines, using the firm’s own 680cc DOHC four-cylinder engine.

Not satisfied with that, the firm also unveiled a second four-cylinder model, the LFS700 – a flat-track-inspired roadster – in June this year, and has expanded into the European market in 2021 with a dealer network initially in Spain and Portugal. 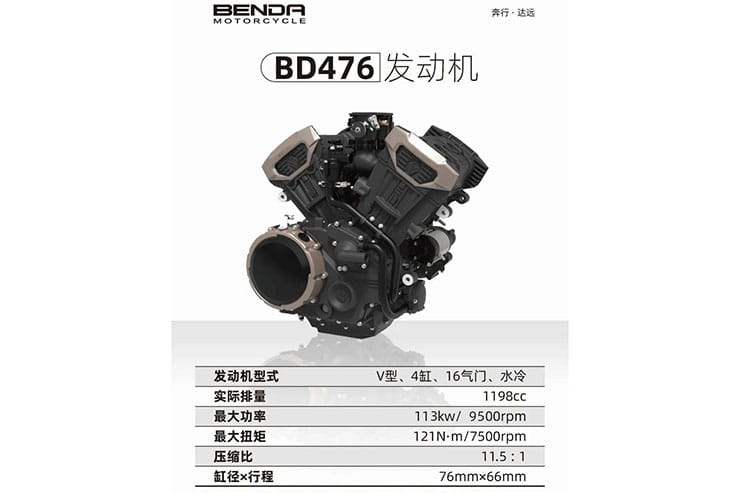 You might have thought Benda would put its corporate feet up for a while after that lot, but at the CIMA show that’s currently underway in China the firm has taken the wraps off not one but two new V4 engines that will power future models that are due to be revealed in 2022.

The larger motor is an 1198cc, DOHC, water-cooled unit with four valves per cylinder and a peak power of 152hp – enough to make it the most powerful Chinese-made motorcycle engine we’ve seen so far. Although it’s not up there with the 200hp-plus that the latest European V4s like Ducati’s Panigale V4 and Aprilia’s RSV4 can offer, the engine’s dimensions suggest it’s aimed at something closer to a Yamaha V-Max style bike. In fact, the bore and stroke – 76mm x 66mm – are identical to the old 1200 V-Max (the later 1700 version kept the same stroke but increased the bore to 90mm). The engine’s name, BD476, appears to reflect the number of cylinders (4) and cylinder bore (76mm).

Not that the engine is a copy; it doesn’t bear any physical resemblance to the V-Max engine other than its general layout, and other internal details – like the higher 11.5:1 compression ratio – are also different to the Yamaha design.

The max power comes at a lowish 9500rpm, reflecting the long-stroke engine design, while peak torque of 89lbft arrives at only 7500rpm. 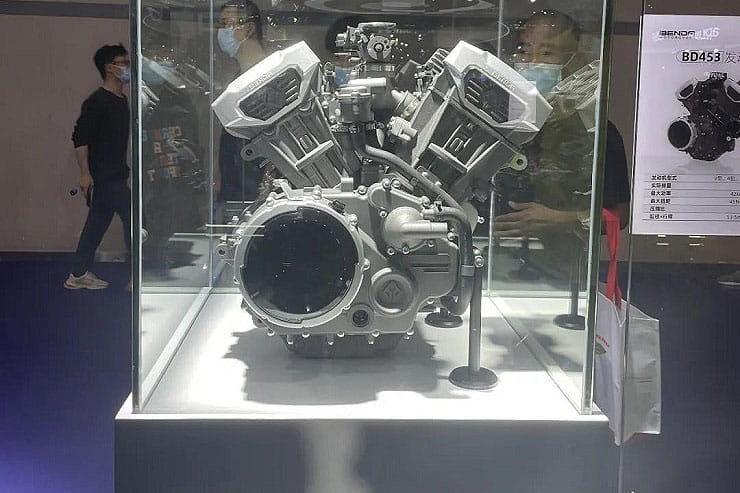 Not satisfied with one V4 engine, Benda also showed a second version, looking identical on the outside but with a much smaller 496cc capacity. We haven’t seen a four-stroke four that size since the likes of Honda’s VF500.

Since it’s clearly based on many of the same components as the bigger engine, it’s not a compact unit. Called BD453, the 496cc engine has a 53.5mm bore and a 55.2mm stroke, making for an unusually under-square set of internal dimensions. Normally, bike engines’ bores are significantly larger than their strokes for an ‘over-square’ design.

The smaller motor’s performance is understandably significantly lower than that of the 1198cc V4, with a peak of 56hp at 10,000rpm and max torque of 33lbft at 8000rpm.

Although not mentioned at the unveiling, it’s worth noting that if Benda was to combine the 1198cc engine’s 76mm bore with the 496cc unit’s 55.2mm stroke, the result would be a high-revving 1000cc V4 with the sort of bore and stroke ratio usually seen on superbikes. 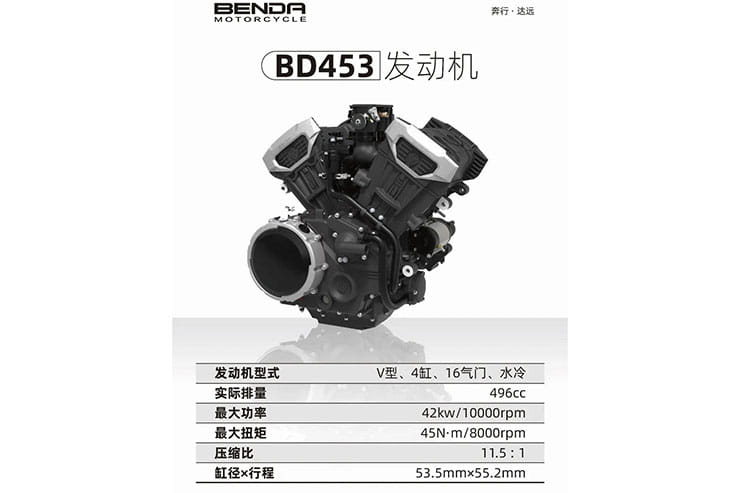 Since Benda’s plate is currently piled high with work to ramp up production of its initial 680cc inline four models, not to mention the 300cc turbocharged V-twin that the company teased early this year, the production bikes with the new V4 engines aren’t due to be revealed until 2022.

Will we ever be able to buy the resulting machines here? That remains to be seen, but since Benda already has the beginnings of a European dealer network it seems likely that its bikes will reach the UK eventually.