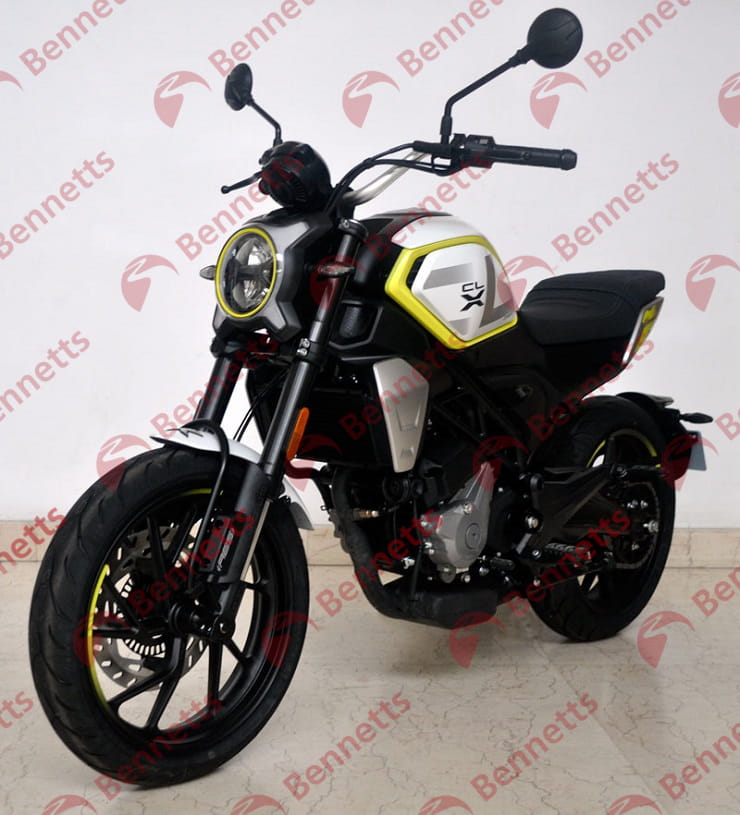 The CFMoto 700 CL-X that was first shown back in 2019 is just hitting UK shores and its combination of attractive pricing and on-target neo-retro scrambler styling mean it’s well placed to help the Chinese firm establish itself as a genuine alternative to the usual Japanese or European options.

Now we’ve got our hands on the first picture of the baby CL-X that’s set to join it in the range, providing an entry-level model with the same styling cues.

Dubbed the 250 CL-X, the new bike has been type-approved in China, suggesting its launch is imminent, and the picture shows a very finished-looking, production ready machine. By the time the bike reaches UK shores, it’s likely to have gained the larger 292cc engine from the 300 NK – a model that it shares most of its mechanical parts with.

The 292cc engine and the 249cc version sold in China are much the same, even in terms of power, but the larger unit is Euro 5-certified for sales over here, and since we don’t have a 250cc licence tier it’s sure to be the version we get. On the Chinese-market 250 CL-X the peak power is 20.5kW, and CFMoto quotes the same figure for the UK market 300 NK – equating to 27.5hp.

CFMoto’s type-approval documents shows that the frame, swingarm, forks, wheels and brakes are all shared with the 250 NK and 300 NK, and the 250 CL-X also features the same belly-mounted exhaust system. That means it’s going to be straightforward to get into production, and the task of achieving emissions certification around the world will be much easier than for an all-new model.

The homologated specs show that the 250 CL-X weighs in at 155kg, which is a fraction more than the 150kg quoted for the 300 NK in the UK. However, it’s actually 3kg less than the comparable Chinese type-approved weight of the 250 NK over there (158kg), so the actual difference will almost certainly be too small to notice.

There’s a slight difference in wheelbase – 1360mm for the NK, 1365mm for the CL-X – which might indicate a change in sprocket size, with the rear wheel’s position adjusted to suit. That rear wheel is fitted with a slightly larger 150/60R17 tyre instead of the 140/60R17 of the NK, too, but despite any changes in gearing caused by either the tyre change or the sprocket size, the top speed is rated as the same 128km/h (80mph) for both models.

A circular dash – probably a similar unit to the colour TFT used on the larger 700 CL-X – replaces the smartphone-style rectangular display of the NK, and the CL-X’s riding position appears to be rather more relaxed. The bars are higher, wider and more pulled-back than the NK’s, while the footpegs are lower and further forward. The pillion pegs are repositioned, mounted on extensions of the rider footpeg brackets instead of hanging from the seat subframe, giving a cleaner profile.

In terms of appearance, the 250 CL-X features the same headlight design as the 700 CL-X – with the distinctive X-shaped surround, a ring of running light LEDs and two main lights behind the single lens. The tank shape is also similar to the 700 CL-X’s, with distinct, separate side panels, and at the back the seat again mirrors the larger model, as does the swingarm-mounted licence plate and turn signal bracket.

With an official debut expected imminently in China for the 250 CL-X, there’s a good chance that a Euro-spec 300 CL-X will rear its head at shows towards the end of 2021. As and when the bike goes on sale here, the price is sure to be close to that of the 300 NK that shares so much of its DNA and currently sells for £3499 on the road.

We’re also expecting to see a redesign of the 300 NK itself soon, after similar type-approval documents appeared for the restyled version in China earlier this year.