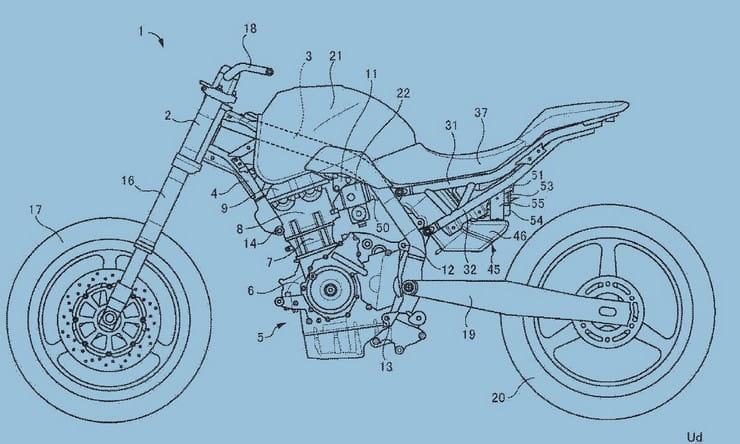 Way back in 2013 Suzuki stole the Tokyo Motor Show with its turbocharged Recursion parallel twin sports bike – and while it’s changed beyond recognition since then the project is still underway.

A newly published patent shows the latest state of work on the machine, which appears to be evolving into a non-turbo parallel twin of around 700cc to rival Yamaha’s MT-07 and, presumably, replace the SV650 that’s been the backbone of Suzuki’s middleweight range for more than two decades. While the Recursion concept from 2013 garnered a lot of publicity, Suzuki’s follow-up to that machine – the XE7 engine, shown in Tokyo in 2015 – has been the backbone of development work since then. Where the Recursion used a 588cc single overhead cam engine, with a turbo but tuned for a modest 100hp, the XE7 was a larger double overhead cam design, coming in at around 700cc. Although initially turbocharged, like the Recursion, more recent patents have shown the XE7 in normally aspirated form, fitted to more than one style of chassis – suggesting it could be used on a range of models in the future, potentially in both boosted and non-turbo forms.

The latest patent is for a normally aspirated machine. The design focusses on the airbox, which is unusually shaped and positioned under the seat instead of below the fuel tank.

While the layout means the bike can’t take advantage of ram-air using intake ducts from the nose, the patent says it has the advantage of allowing a larger airbox capacity, potentially increasing performance, without compromising the fuel tank’s size. The design is surprisingly detailed, including aspects like the airbox’s shape and mounting brackets, which allow it to double as a battery mount. This level of detail carries over to the rest of the bike shown in the design – the airbox shape is intrinsically linked to elements like the frame rail position and the rear subframe design, so the bike shown in the patent drawings is likely to be fairly representative of a real machine.

That frame runs up and over the engine, with the fuel tank wrapping around the main rails to give a fairly traditional style. At the back, the bolt-on subframe carries a stepped tandem seat unit. The overall style, with bars mounted above the top yoke, hints at an SV650-style roadster, although as and when Suzuki gets its new twin-cylinder engine into production it’s likely to appear in a range of models, from adventure bikes to sports bikes, mirroring the way Yamaha has applied the 700cc CP2 engine from the MT-07 to a wide variety of machines including the R7, Tracer 7 and Ténéré 700.

The turbocharged version of the engine has also been subject to patents many years after it was originally shown – most recently appearing in a 2019 document – so hopefully there’s still scope for a GSX-R750-replacing sports bike using a turbo twin in the future.