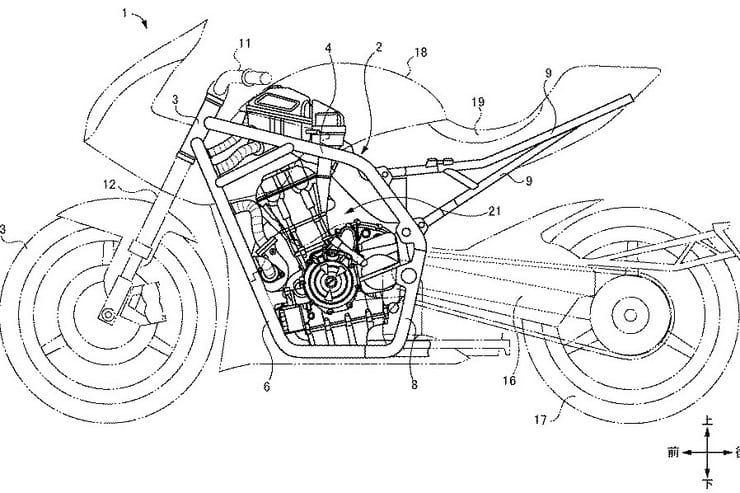 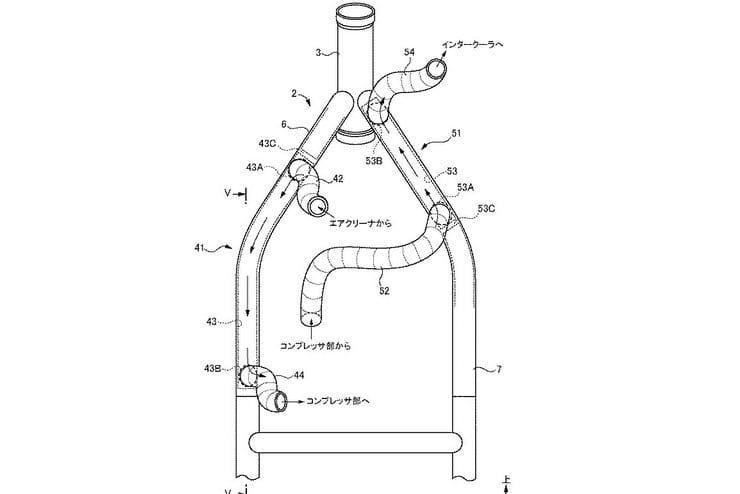 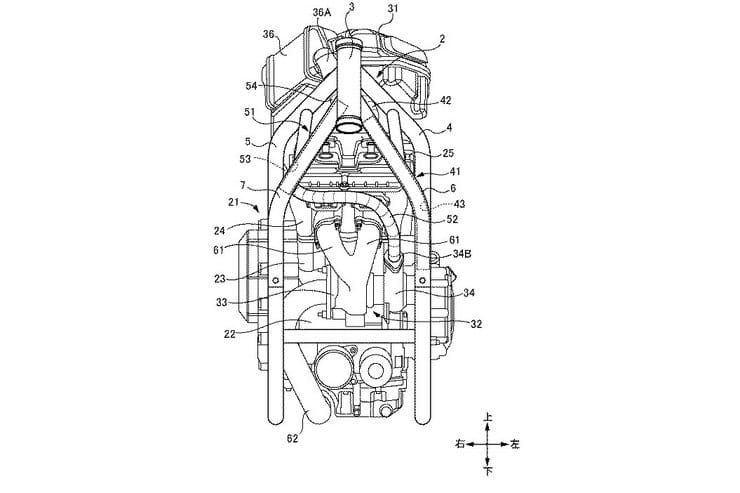 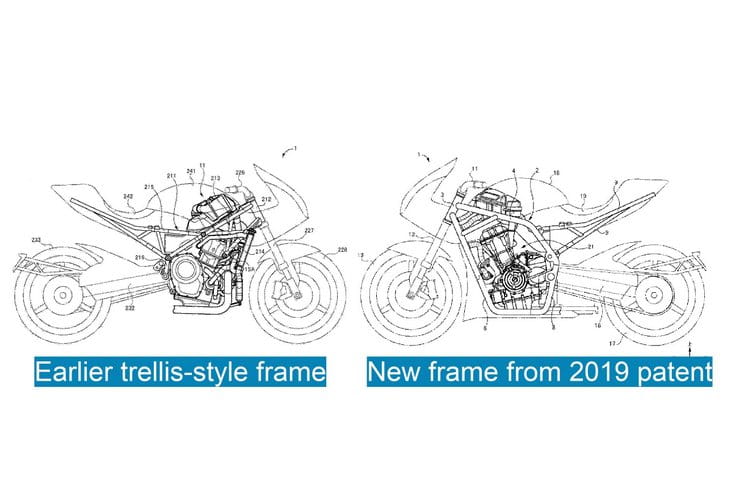 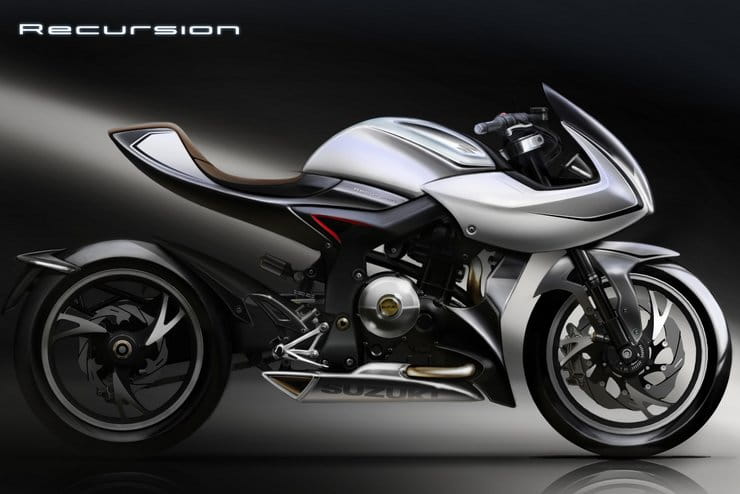 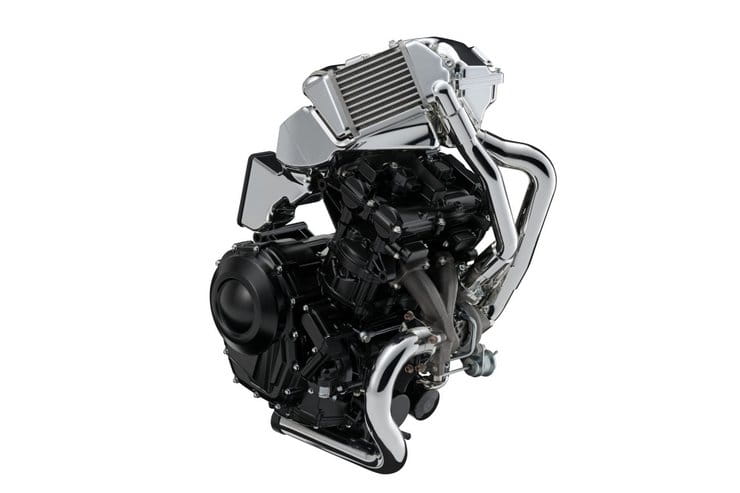 Just last week we pondered the future for Suzuki’s planned turbocharged parallel twin sports bike and as if on cue newly published patent applications have shown up to give more insight into what’s happening to the project.

As a quick recap, Suzuki first tossed out the idea of a mid-sized, turbocharged, twin-cylinder sports bike back in 2013, when it revealed the Recursion concept. That was a SOHC, 588cc design with moderate boost to give a claimed 100hp combined with better torque, economy and emissions than a normally-aspirated bike of similar performance. Two years later, the firm revealed a development of the idea in the form of its prototype ‘XE7’ engine. Now upped to around 700cc, the parallel twin gained a DOHC cylinder head and a more compact design for the turbo and intercooler. While Suzuki made no power claims, the sportier XE7 promises significantly greater performance; 150bhp-plus should be within easy reach.

Since 2015, there’s been no official statement or showing of the project, but a steady stream of patents from Suzuki has revealed the progress of the bike’s development.

Now, though, a new patent application reveals the biggest change we’ve seen since the first appearance of the XE7 engine, with the latest designs showing a completely re-thought chassis layout.

It’s actually the third distinct frame design that the project has had. The original Recursion featured a fairly conventional aluminium frame, with two beams running over the engine. However, that layout restricted space above the cylinder head, where the airbox sits, and meant the turbo bike’s intercooler – needed to cool down intake air after it’s been compressed by the turbocharger – had to be positioned under the rider’s seat.

That original frame layout was thrown out when Suzuki developed the DOHC XE7 turbo engine. The XE7’s intercooler is mounted above the engine, alongside the airbox, to make for a more compact package, and a steel trellis frame was designed to make more space to fit it. The trellis also allowed more space for the vastly increased number of intake hoses and cooling hoses required for a turbo engine.

At a glance you can see that the latest chassis layout is basically a take on the old Featherbed frame idea, a ‘full duplex’ design with two steel loops running all the way around the engine. It might appear an outdated way of doing things, but Suzuki has one very good reason for taking on the idea.

Compare the image of the new frame with the previous patents’ trellis-style chassis, and you’ll notice that the engine appears much less cluttered. That’s because Suzuki’s idea is to run all the extra air intake pipework that the turbocharged engine needs through the frame tubes rather than around them.

The actual XE7 engine layout is unchanged, with the airbox mounted in the conventional spot above the cylinder head and the intercooler fitted next to it to save space. That means the engine’s intake air needs to be drawn in through the air filter above the engine and piped down to the turbocharger’s compressor just behind the front wheel. Once compressed, the intake air is then piped back up to the intercooler before going into a pressurized plenum above the throttle bodies.

By using the frame’s down-tubes as pipework for this, Suzuki has been able to cut down on the amount of extra hoses needed.

There are two potential reasons for doing this. One is simply to cut down on the number of components and to reduce the amount of space needed by making the chassis tubes play a second role as pipework for the intake air. It makes sense; frame rails are normally empty, so why not use the space they take up? In the past it wasn’t unusual to see bikes using frame tubes as oil tanks, and some Buell frames used to double-up as fuel tanks.

The second reason could be because, having put the effort in to develop a turbocharged bike engine, Suzuki will certainly want to use it in multiple models. Ignore the Recursion-style bodywork shown on the patents, and you can see that the duplex-style frame, with its cleaner look, would be much better suited to a retro or naked bike than the cluttered appearance shown in earlier, trellis-framed versions of the idea. 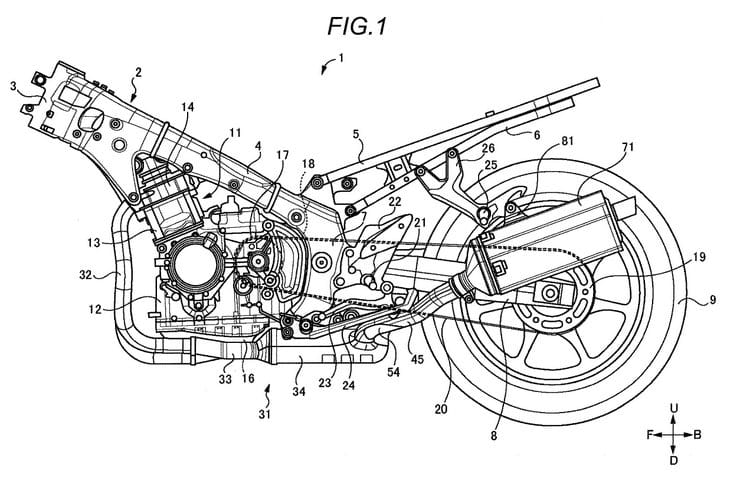 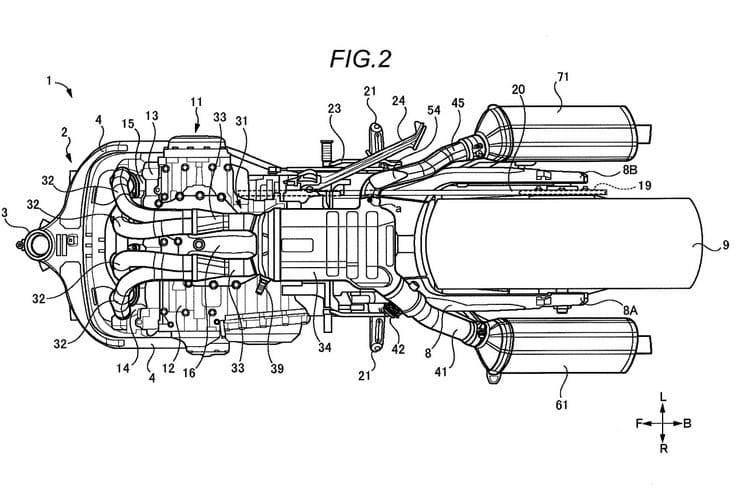 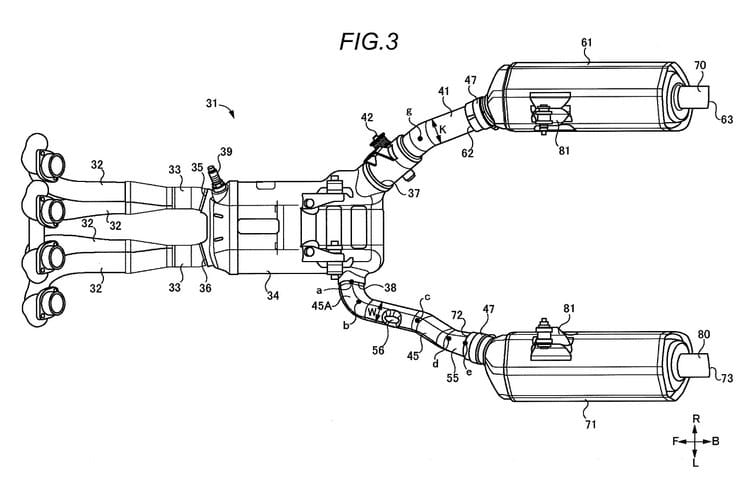 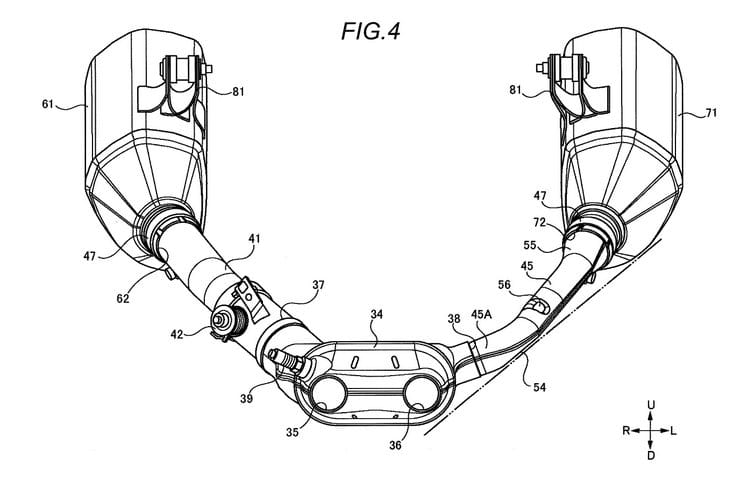 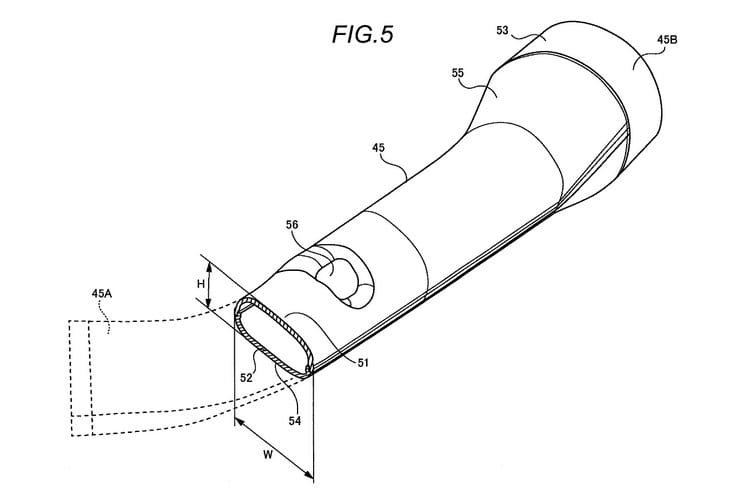 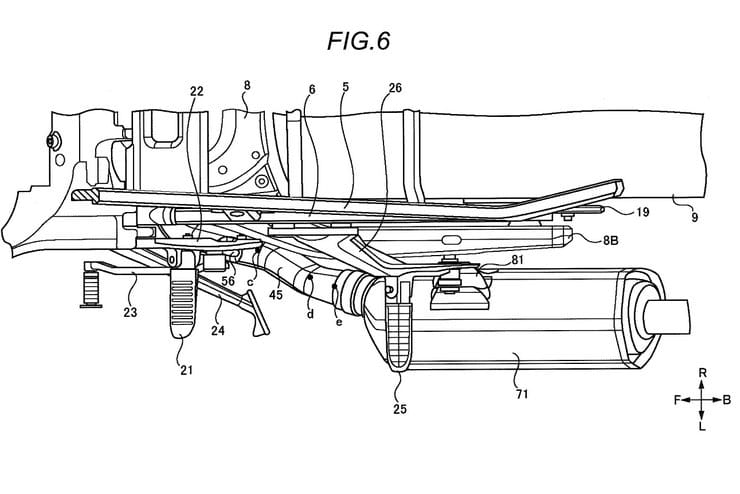 As with our earlier glimpse of the bike, the focus is on the signature twin exhaust system that’s been a Hayabusa calling card ever since it debuted 20 years ago. In Japan, those two, large exhausts are closely associated with the idea of power and performance; it’s why rival machines like Kawasaki’s ZZR1400 use a similar solution, even though it might appear old fashioned compared to some of the under-engine or under-seat systems used elsewhere.

The new patent application explains that while the twin-pipe setup looks traditional, it’s actually a clever solution that’s intended to improve both power and torque.

Look closely and you’ll notice that the pipe connecting the left-hand end-can to the main collector/catalytic converter box is noticeably thinner than the one that connects the right hand silencer. Further images also show that the two silencers have a different internal layout, and that there’s a servo-controlled valve that can close off the freer-flowing right hand exhaust.

The idea is that at low revs, only the left exhaust is used. Its thin pipework and stifling silencer will keep things quiet and help increase back-pressure, which can boost low-end torque. At higher engine speeds, the servo gradually opens up the free-flowing right hand exhaust, making the bike louder and increasing peak horsepower. To use the words of the patent application itself: “it is possible to increase an output of the engine and to create a fascinating exhaust sound which expresses that the engine is favourably racing”.

A second benefit of the design is visible when you look at the drawing of the underside of the bike. The thinner left-hand exhaust pipework is on the same side as the drive chain, which in turn takes up space and requires that side of the swingarm to be moved outwards. The thinner pipe can snake around the chain and even incorporates a flattened section on its underside to increase ground clearance. A small dent is also added on top of the pipe to make space for the gear linkage. Meanwhile the much fatter ‘high power’ pipe can take a straighter route on the right hand side to ensure the best possible gasflow and with no chain on that side can be tucked closer to the rear wheel so it doesn’t limit cornering clearance.