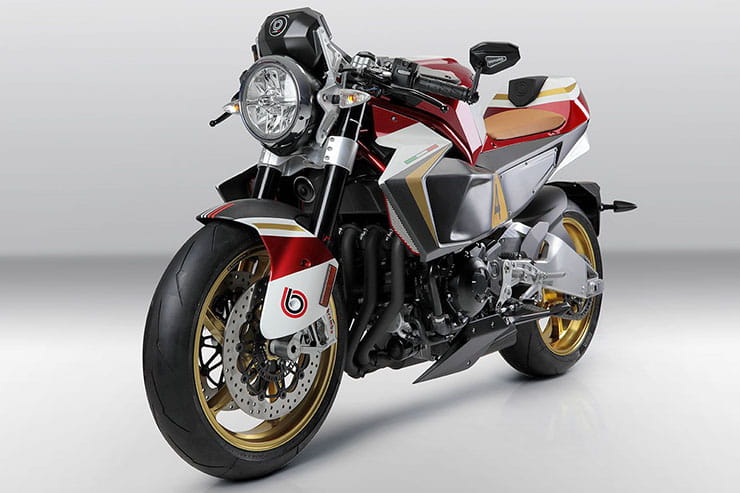 Bimota’s rebirth under its current ownership – with Kawasaki taking a 49.9% stake – started with the Tesi H2 that was shown in 2019. That machine’s weird suspension, Transformers styling, supercharged engine and £60k price tag meant that while you’d certainly stop and look if you saw one, it’s probably not on your ‘next bike’ shortlist.

With the new KB4 and its sibling the KB4RC (for ‘Race Café’, apparently), Bimota is edging closer to the real world.

The KB4 was revealed as a styling sketch alongside the Tesi H2 in 2019, and since then Bimota has released several images of prototypes under test, so the styling – which is a call-back to earlier Kawasaki-powered Bimotas, most notably the KB1 of 1978 – is already familiar. The large, circular headlight and big side-mounted air intakes make it stand out from the sports bike norm while still managing to have a familiar, slightly retro look.

However, Bimota has always been about innovation in terms of chassis design, having been founded on the idea of taking existing engines and bolting them to more capable frames back in the 70s, and the KB4 absolutely follows that tradition. 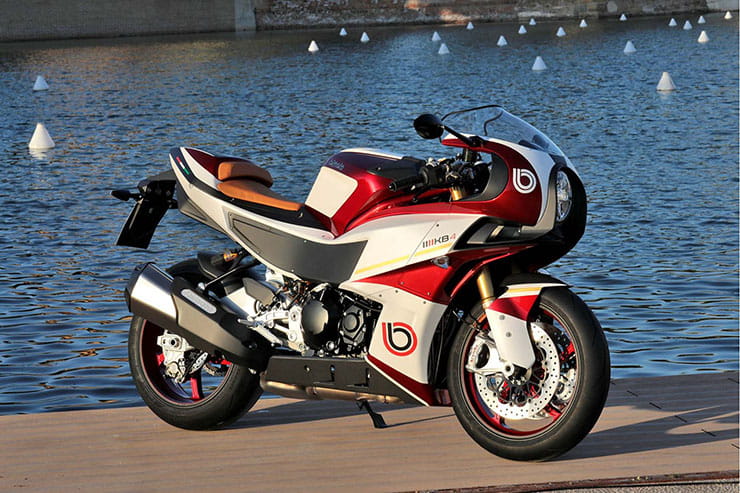 The key element to the new bike, which Bimota has carefully tried to hide during its development but which we revealed back in September, is a repositioned radiator. Instead of nestling behind the front wheel, it sits, slanted at an angle, below the rider’s seat and just above the rear wheel.

It’s a layout that immediately explains those large side-mounted air intakes at the front of the bike; they’re not feeding the engine, but funnelling air through ducts that run along the flanks, around the sides of the cylinder head and into the radiator that sits behind it.

Although the ducts add width, the repositioned radiator allows the wheelbase to be radically shorter than you’d expect on a bike like this. As our previous scoop revealed, it’s a mere 1390mm. That’s 50mm shorter than the Kawasaki Z1000 that donates its 140hp (142PS) four-cylinder, 1043cc engine, and a full 70mm less than the latest 2022 Honda Fireblade.

Because the wheelbase reduction comes from repositioning the radiator and moving the front wheel rearwards, the swingarm – a hefty, braced aluminium dual-sider – doesn’t need to be shortened to achieve it, which bodes well for the handling.

“No other manufacturer has a motorcycle like Kb4 and Kb4RC,” said Pierluigi Marconi, Bimota General Manager. “No one has this much fun and function in one package. The Kb4 & Kb4RC are an attention grabber that will act like a halo for Bimota by attracting further consumer attention to our impressive vehicle line-up". 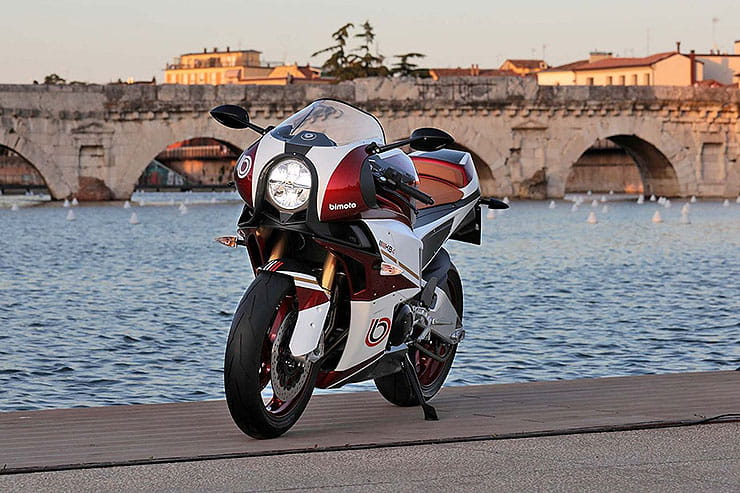 Even more impressive than the fact Bimota has squeezed such a big engine into a small package is the KB4’s weight. Once again, our earlier figures have proved accurate, so the standard, full-faired model weighs 194kg wet, an astounding 41kg less than the Ninja 1000SX.

Even with the engine in exactly the same spec as in the Kawasaki – helping the Bimota sail through emissions rules – that reduction in mass and wheelbase mean the KB4 will be a much faster, quicker-turning bike. It might not have the 200hp-plus of the latest superbikes, but even so it’s unlikely to be embarrassed on the road or the track. The engine’s large capacity means there’s lots of torque – 82lb-ft at only 8,000rpm – and with peak power coming at just 10,000rpm it doesn’t need to be screamed to make the most of its performance. Meanwhile the rake, at just 24-degrees, is among the steepest you’ll find on any bike.

The rest of the specs include a tubular steel trellis frame with billet aluminium plates bracketing the swingarm pivot, along with the usual exotic suspension and brakes you’d expect to find on a bike like this. Öhlins R&T NIX30 forks are allied to a TTX36 shock, the same kit seen on plenty of high-end machines.

Other key dimensions include an overall width of 774mm and a seat height of 810mm, adjustable by 8mm in either direction. The fuel tank holds 19.5 litres, while the tyres are superbike-sized: 190/50ZR17 rear and 120/70ZR17 front, on forged alloy five-spoke wheels.

The missing metric at the moment is price. The KB4 is a Bimota, so don’t expect it to be cheap, but given the support of Kawasaki there are hopes that it will be more attainable than previous generations. 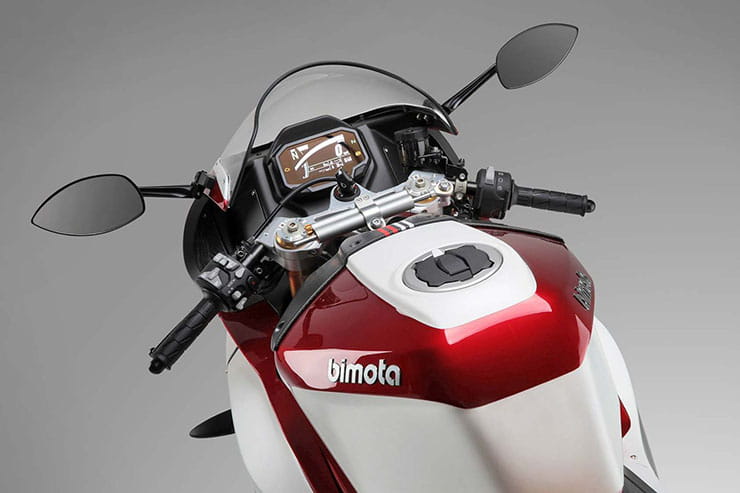