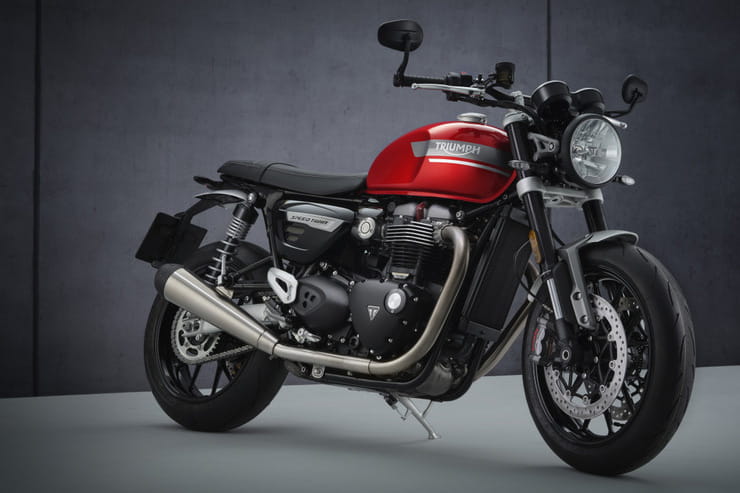 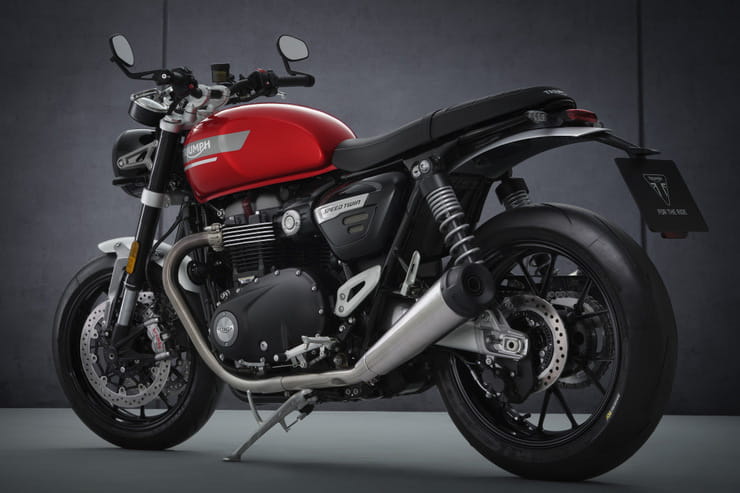 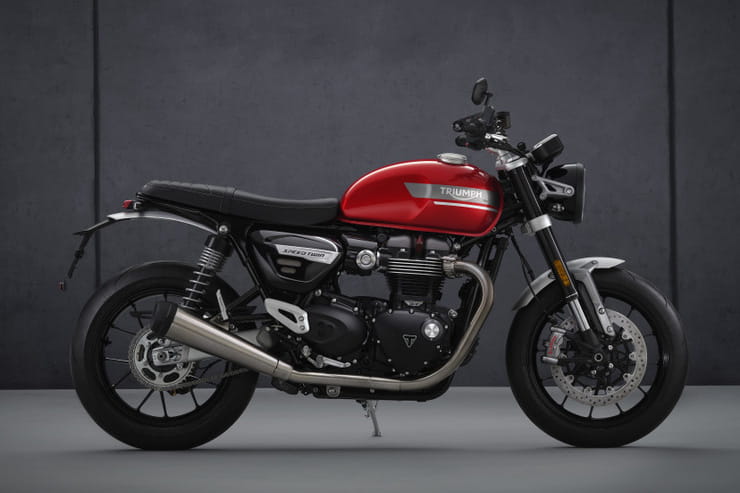 We might be nearly halfway through the year, but Triumph’s new model updates are still coming with the launch of the new 2021 Speed Twin – and despite looking much like its predecessor the latest version has some significant improvements to offer.

Following on from the revamped Bonneville range that it’s derived from, the Speed Twin gains improvements to its 1200cc twin to meet Euro 5 emissions limits, more power than before and a revised chassis to suit. On top of that there are tweaks to the electronics and subtle styling alterations to mark out the latest model. 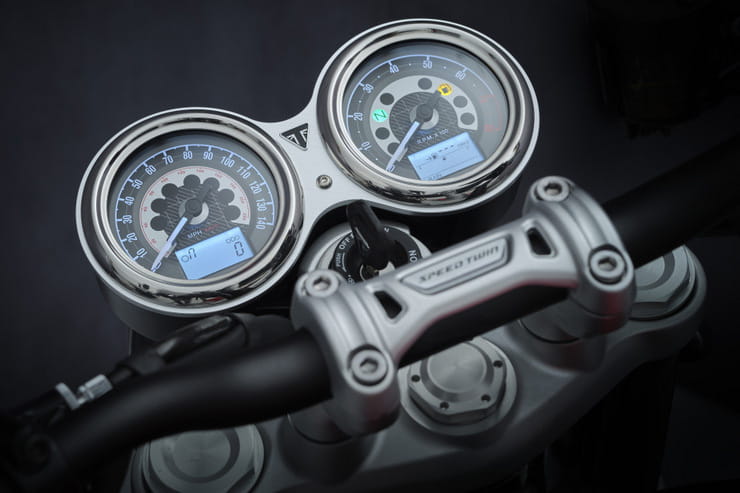 Starting with the engine, the new Speed Twin’s capacity stays at 1200cc but power rises from 97PS to 100PS (that’s 98.6bhp) and now reaches its peak at 7250rpm instead of 6750rpm. While the peak power revs have risen, the maximum torque of 82.6lbft – unchanged from last year’s model – now comes at 4250rpm instead of 4950rpm. With peak torque at lower revs and peak power higher in the rev range, the result is a broader spread of performance.

The changes come courtesy of new high-compression pistons, upping the compression ratio from 11:1 to 12:1, and a new crankshaft that helps slice 17% off the engine’s inertia. Updated cam profiles and revised ports complete the internal changes, while the exhaust is a new Euro5 version with an additional catalytic converter and brushed alloy end cans instead of the previous black ones. A new secondary air injection system helps meet the all-important emissions targets.

On the downside the new engine is thirstier than the old version, with fuel consumption dipping from 58.9mpg to 55.4mpg. 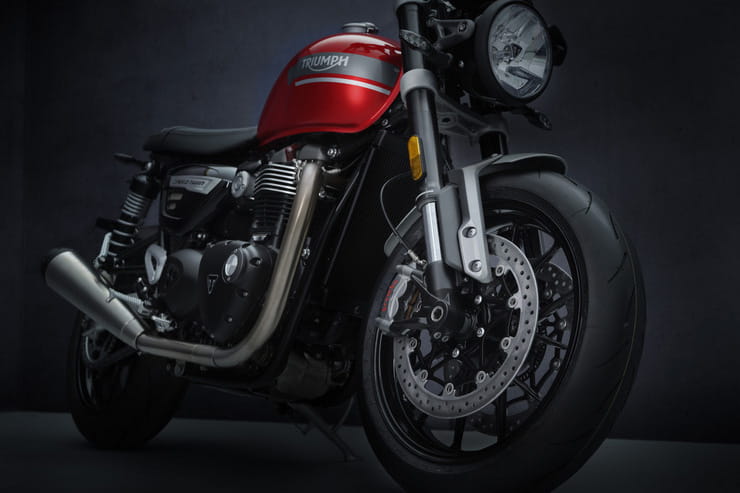 The big visual change to the Speed Twin is also its major chassis update – a new set of upside-down forks instead of the gaiter-clad right-way-up cartridge forks of before. The new units are from Marzocchi, with a 43mm diameter compared to the previous 41mm, adding an extra dose of rigidity.

They’re still relatively simple units, with no damping adjustment on offer, so suspension tweaks are limited to altering the preload on the twin Kayaba rear shocks. The new forks also mean the bike’s geometry is altered compared to its predecessor. The rake tightens from 22.8 degrees to 22.3 degrees, the trail is reduced from 93.5mm to 91.5mm and the wheelbase is shortened from 1430mm to 1413 – all indicating sharper handling than before.

The new forks also usher in some 21st century tech in the form of radial-mount Brembo M50 brake calipers. These grab 320mm discs, up from the previous 305mm diameter, while the rear setup is unchanged with a 2-pot Nissin caliper and 220mm disc.

As with the rest of Triumph’s 2021 models, the Speed Twin’s weight is now measured ‘wet’ and comes in at 216kg. That makes it hard to make a direct comparison to the previous version, which was listed with a ‘dry’ weight of 196kg. In the real world, both bikes will come in at about the same once the 14.5l fuel tank is full and the oil is topped up. 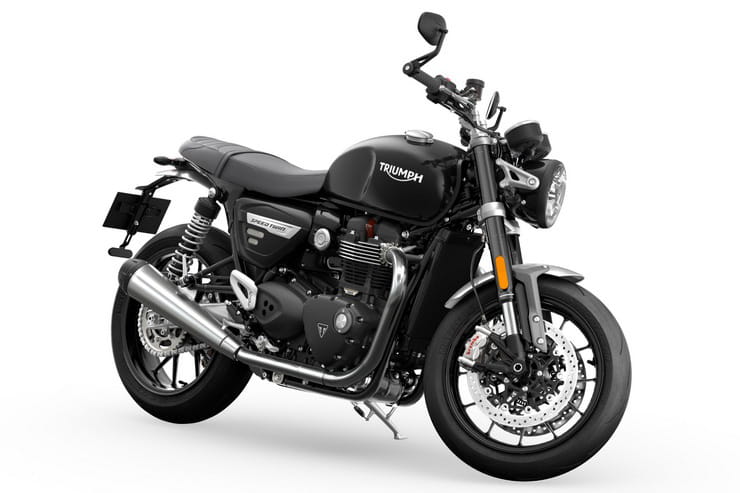 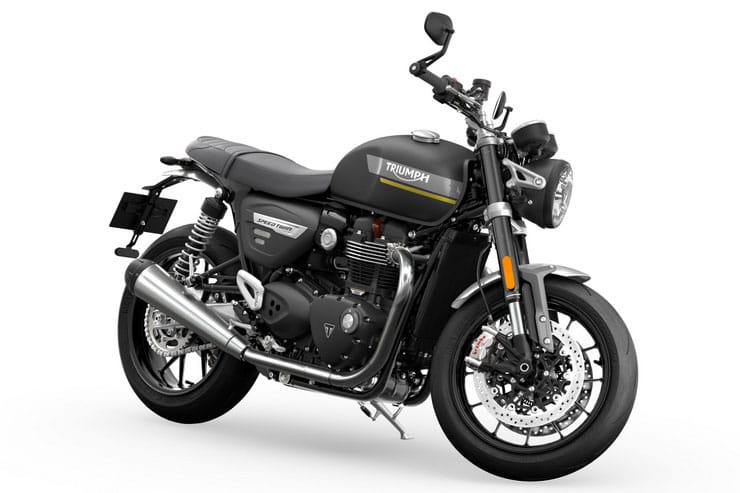 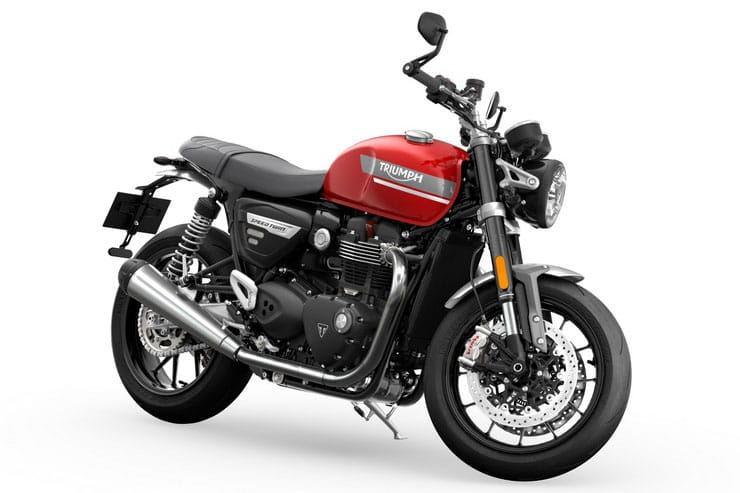 New wheels are the other noticeable change on the 2021 Speed Twin, with lightweight 12-spokers replacing the bulkier-looking 7-spoke design used before.

Those new wheels, upside-down forks and radial Brembos, not to mention the extra horsepower, mean the additional £300 that’s added to the price for 2021 seems more than reasonable, with the Speed Twin now starting at £11,000. But that’s not all, as the 2021 model also gains tweaked electronics including revised riding modes – Rain, Road and Sport – and traction control settings. Stocks are due to arrive in August, with colour options including red with grey and silver tank graphics, grey with a yellow flash on the tank, or a pure black version. The versions with graphics carry an extra £200 on the price tag.

Of course, there’s plenty of opportunity to empty your wallet further, with more than 50 optional accessories on offer, including luggage, seats and heated grips. 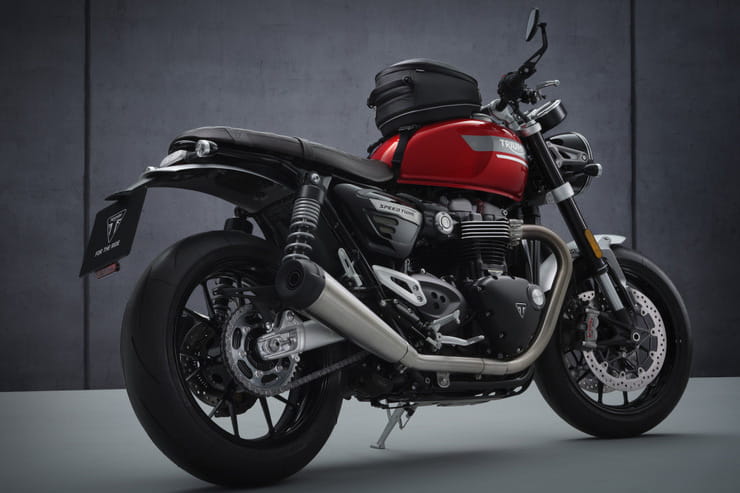 The simple, circular unit gets a machined alloy case etched with Triumph’s branding and offers the same functionality as the normal Beeline offering. Controlled by a dedicated app, it offers turn-by-turn navigation or a simple ‘compass’ mode that points at your destination but leaves you to find your own route to get there. The app also allows route tracking and sharing, and the display can act as a clock, speedo and trip computer.

Costing the same £199 as the normal Beeline ‘Moto Metal’ unit, the Triumph version is available from Triumph dealers now – you don’t need to own a Triumph to buy one – and comes with a two-year warranty rather than Beeline’s normal one-year arrangement, which makes it something of a no-brainer if you’re in the market for one anyway. Its maps cover the UK, Europe, USA, Canada, Australia, New Zealand and Japan. You can read our full review of Beeline Moto here. 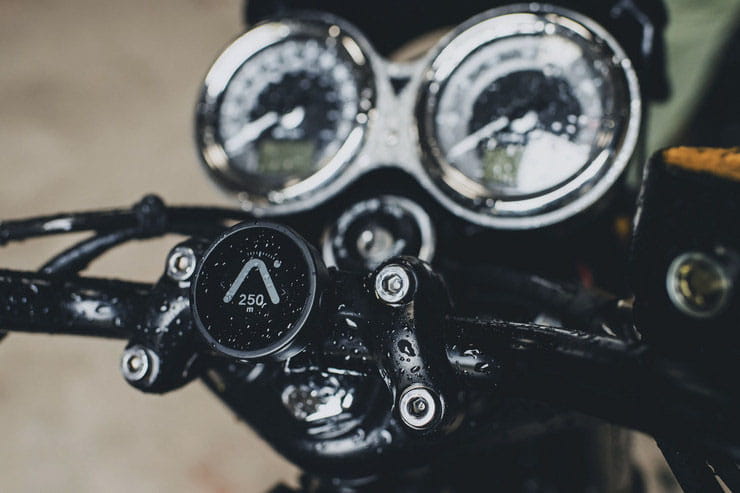