China could drive a cruiser revival 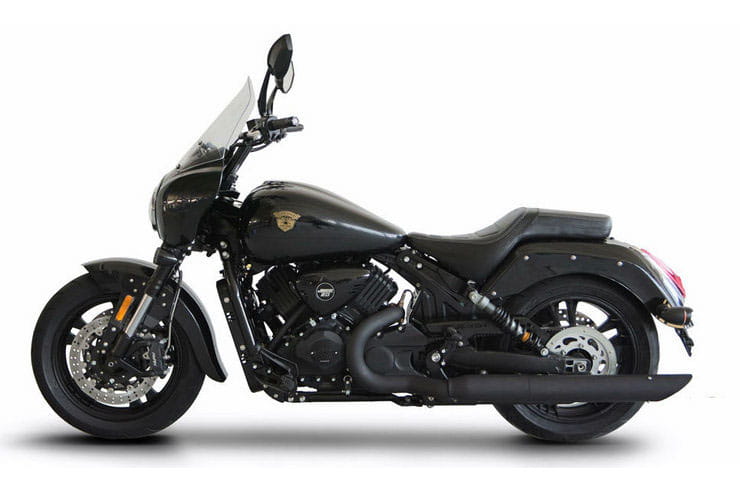 While Europe’s obsession with adventure bikes continues unabated the fast-growing Chinese market for big bikes is turning to an increasingly wide array of machines – with cruisers in particular coming to the fore.

With millions of riders and a growing middle class with disposable income at hand, not to mention a massive motorcycle manufacturing industry of its own, China’s trends are worth paying attention to. Not only are an increasing number of Chinese bikes reaching these shores, a trend that’s only going to increase as riders’ tastes in China increasingly align with those elsewhere, but global manufacturers are starting to develop new models with Chinese sales in mind. So if China’s riders turn to cruiser in big numbers we might well see a revival of interest in the class from European and Japanese brands. 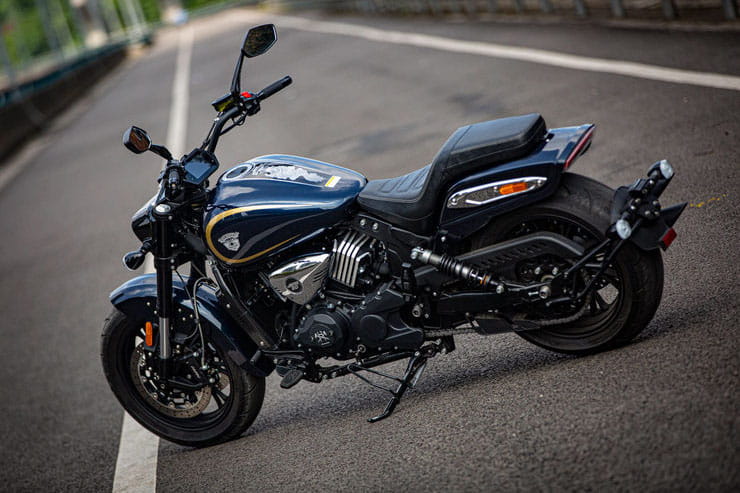 China’s new large-capacity cruisers aren’t generally coming from brands that we’re familiar with on this side of the world, but several new firms are emerging as leaders of the field over there. Among them, Xiangshuai is looking like a leading light – with a couple of 700cc and 900cc V-twins already on sale and several more under development.

The firm’s current range-topper is the JSX900i (top), a 60bhp, 871cc V-twin with a Harley-esque look. Already launched in three versions – a naked cruiser and two part-faired variants – new patents show that Xianshuai is set to add a brace of full-dress touring models complete with hard panniers and a top case. Xianshuai also offers a scaled-down, 701cc V-twin with 48hp on tap, the JSX700i (above) as well as a parallel twin JSX500i that uses a 471cc engine that appears to be derived from Honda’s CB500 unit. 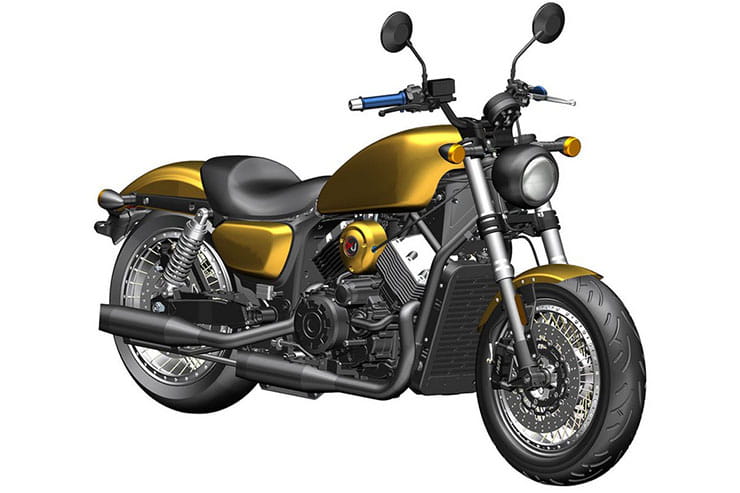 Another new player on the Chinese cruiser scene is Mojiang, which has recently launched its MJ917 model and will soon add a second machine, the MJ918 to its range.

These bikes appear to use a modified version of the same 871cc V-twin that appears in the Xiangshuai models, featuring more traditional cooling fins on the cylinders but the same capacity, bore and stroke. The engine appears to be derived from a motor made by Gaokin, the company that manufactures several Europe-bound models including the 500cc Brixton Crossfire, but also supplies engines to a host of other Chinese brands, not only for bikes but for quads and even aircraft.

In the MJ917, the twin makes a claimed 56bhp and 46lbft of torque. The bike itself doesn’t quite follow the usual cruiser style, opting for a more modern take on the theme instead of the usual chrome-laden look. However, the MJ918 that’s coming soon gets more normal proportions, ticking the ‘bobber’ box.

Both the Mojiang and Xianshuai machines use off-the-shelf suspension and Nissin radial brakes, as well as plenty of 21st century tech including TFT displays and keyless ignition. 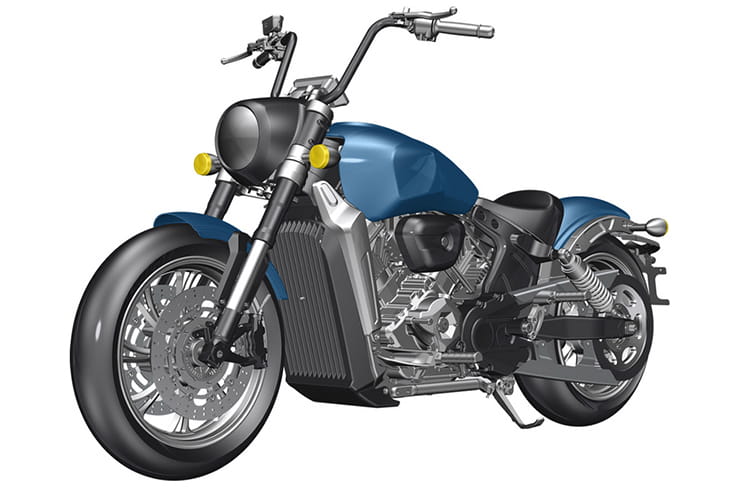 Another company that appears to have plans around the same Gaokin V-twin engine is Jonway, one of China’s better-known brands. Jonway scooters have been sold in the UK for several years, but the firm has recently filed design patents for a totally different machine – a big bobber.

The design is very similar to those from Mojiang, and also other earlier bikes from Motrac, which already sells bikes based around the same engine, with a twin-shock frame that appears to be made of cast aluminium rather than the usual tubular steel. Like the Mojiang machines, Jonway’s design uses its own cylinders with a distinctive arrangement of fins rather than the vertically-finned version of the Gaokin 900 engine that appears in Motrac and Xianshuai’s designs. 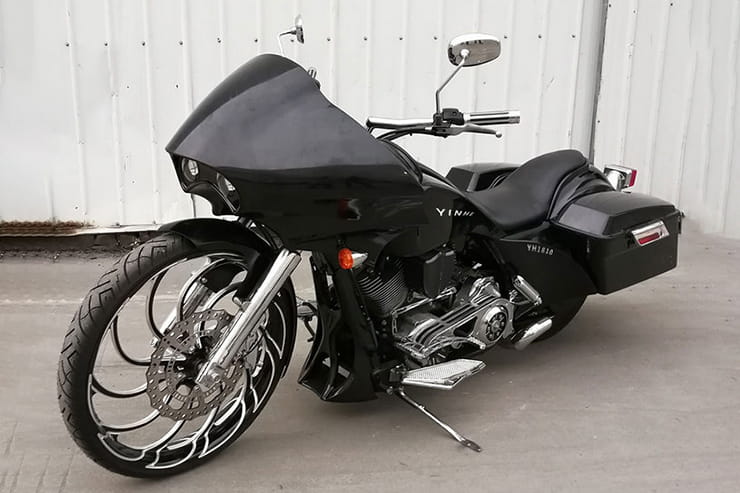 While the 900-class cruisers above represent big bikes for the Chinese market, they’d be distinctly middleweight over here – but that’s not the case for every new Chinese cruiser under development.

Yinhe, a firm that generally makes small-capacity machines, has recently filed paperwork in China for two 1810cc machines that appear to use shipped-in S&S V-twins and massively oversized front wheels to follow the ‘big-wheel bagger’ trend that flared up a few years ago in America. We’re not going to hold our breath for production versions, though.

However, the radical Benda LFC700, which exchanges cubic capacity for more cylinders by using a 680cc inline four instead of the usual V-twin, is already confirmed for production in the second half of this year and will be reaching some European countries as well as the Chinese home market.

Elswhere, we’re seeing more mid-sized cruisers from the likes of Longia, which has just launched the V-Bob 650, below. It’s V-Bob 250 is sold here under the Bullit name, so the 650 might also reach these shores eventually.

Even if none of the new Chinese-made cruisers are likely to draw much interest from buyers over here, the fact that China’s riders are prepared to shell out for such bikes could be the spark that other companies, like the Japanese brands that have largely deserted their attempts at competing with Harley-Davidson in the West, need to reinvest in the idea of cruiser models for the future. 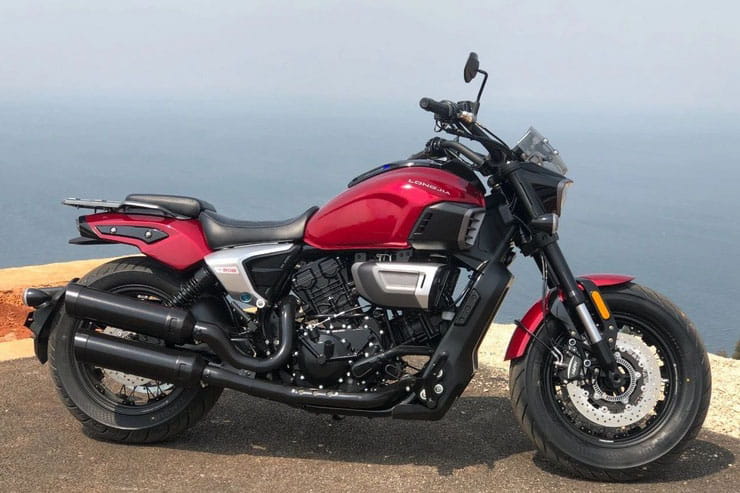