Harley-Davidson reinvents the Sportster for 2021 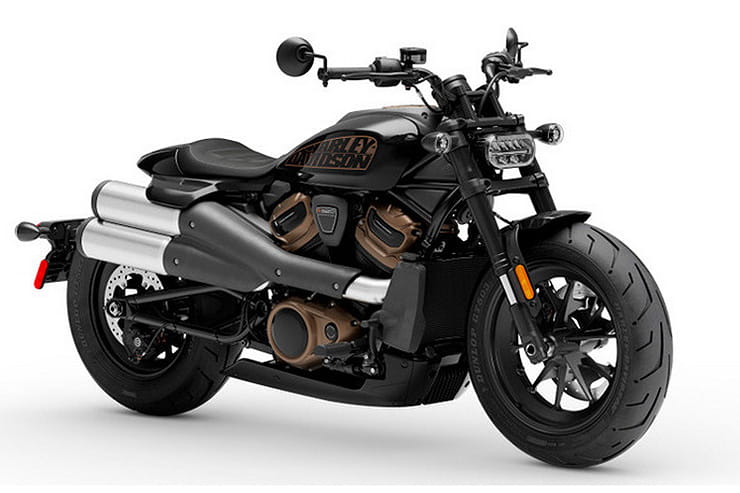 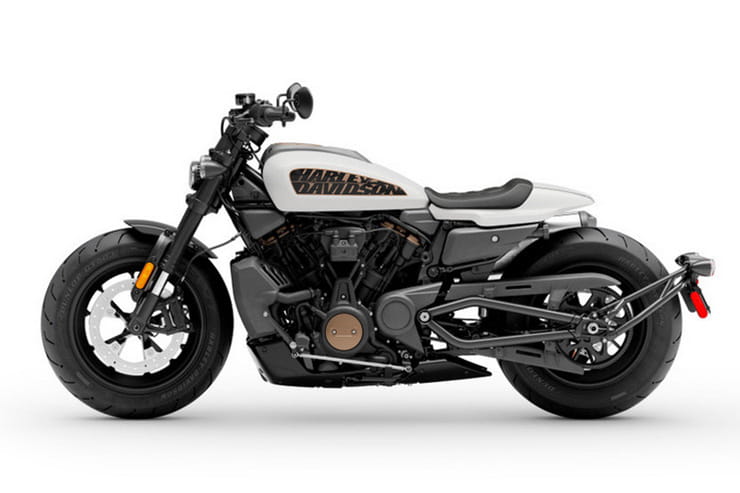 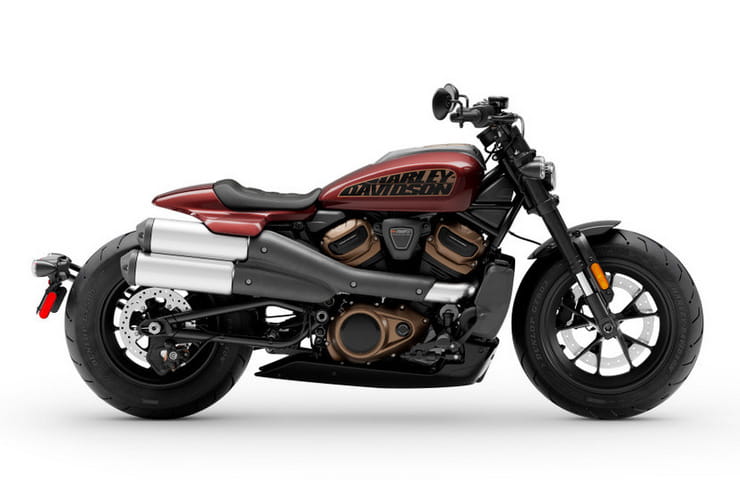 The Harley Sportster name has been around since the 1957s but the latest machine to carry the badge is nothing like any of its predecessors.

There’s no air-cooled, pushrod V-twin. No twin-shock chassis. No lashings of chrome or traditional cruiser styling. Instead the new Sportster – called the Sportster S – is the production version of the ‘High Performance Custom’ concept that Harley first revealed way back in 2018, at the same time as the firm showed the Pan America adventure bike and the now-cancelled Bronx streetfighter in pre-production form.

That means it has a 1252cc, DOHC, water-cooled, 60-degree V-twin instead of an air-cooled, 45-degree engine, and a vast increase in performance over anything to carry the Sportster name in the past. 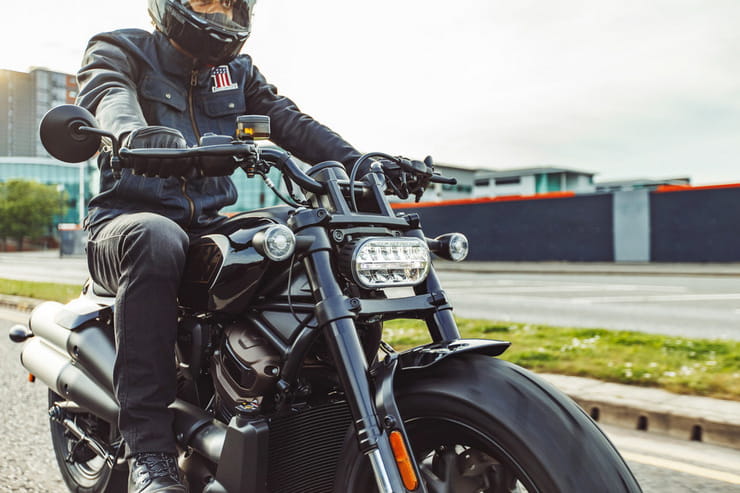 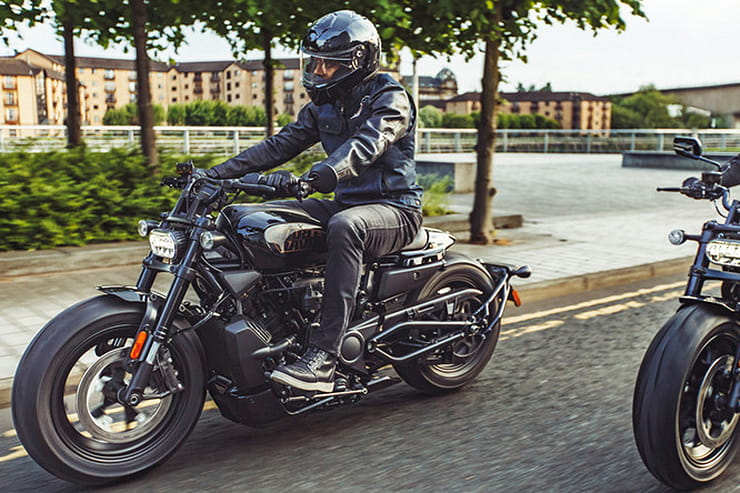 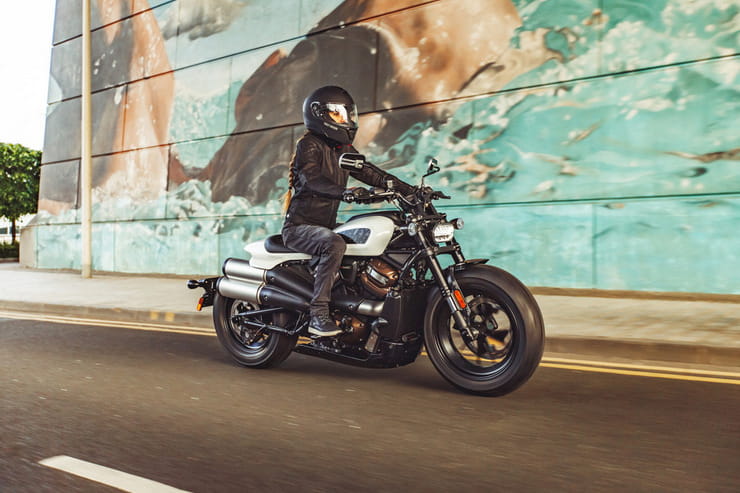 The engine is the same Revolution Max unit that debuted in the Pan America adventure bike, but it’s completely retuned for the Sportster.

The reductions aren’t simply from a remap, either. The Sportster gets new cylinder heads with smaller valves and ports plus  a redesigned combustion chamber, all aimed at boosting the velocity of the airflow and boosting midrange torque. While the absolute peak torque is fractionally down on the Pan America, the Sportster S has up to 10% more grunt between 3000rpm and 6000rpm – the area where you’re likely to use most often.

The engine still features variable valve timing, as on the Pan America, but its phasing is changed, as are the cam profiles, the intake stacks and the airbox volume. 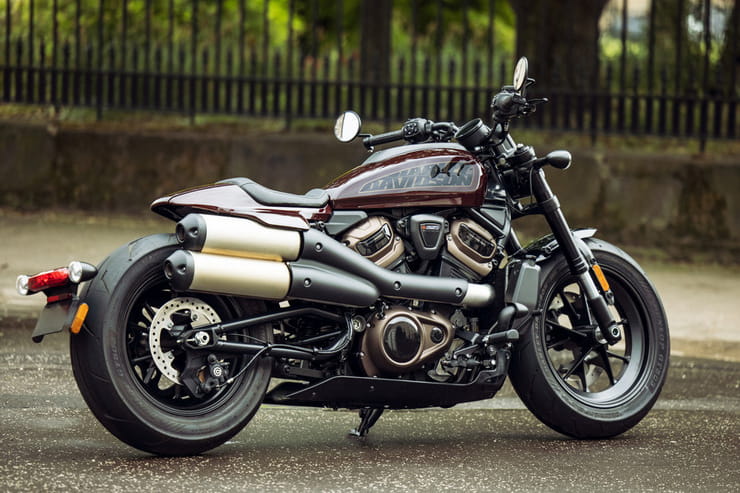 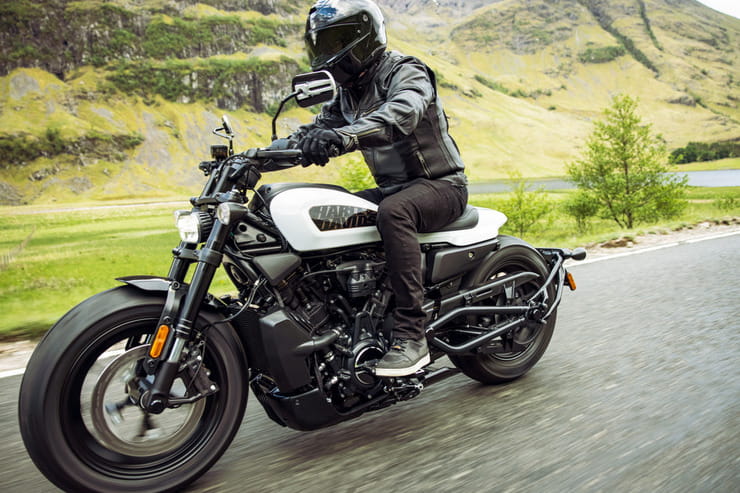 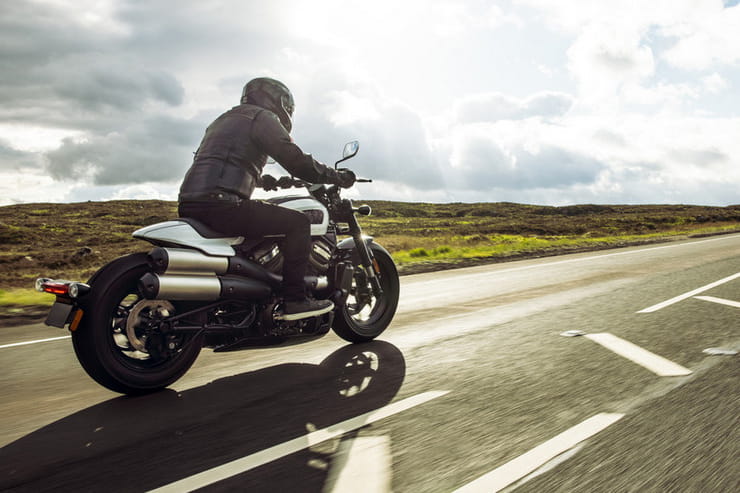 Despite the Sportster moniker, the new bike’s specs mean it’s got more in common with the

old V-Rod than its namesakes. By the end of its life, the V-Rod had a 1247cc, water-cooled, DOHC V-twin making 125hp, putting it within spitting distance of the new Sportster’s 1252cc and 121hp. But the old bike was a much heftier machine, coming in at around 300kg depending on which version you picked, where the Sportster S is a relatively lithe 228kg ready-to-ride. The result means the Sportster will be a significantly better-performing machine, both in a straight line and around corners, than the old V-Rod.

As on the Pan America, the Revolution Max is more than just an engine. It also acts as the main structural part of the bike’s frame – helping to explain how it’s so much lighter. There’s a front frame section and a seat subframe, but they both bolt straight to the powertrain rather than to a central frame.

The transmission is a conventional six speed, with a slipper clutch to prevent rear wheel lockup on downshifts. As you’d expect, there are multiple riding modes – Sport, Road and Rain – that alter the engine power delivery and the traction control and ABS settings. Sport maxes out the performance and reduces the amount of traction control intervention, while increasing engine braking and sharpening throttle response. Road is a middle ground setting, with moderate ABS and TC, slower throttle response and less mid-range power. Rain dulls the response more, reduces the amount of engine braking and gives the highest level of electronic intervention.

There are also two custom modes that can be tailored to suit a rider’s preferences for specific circumstances, tweaking each setting independently. 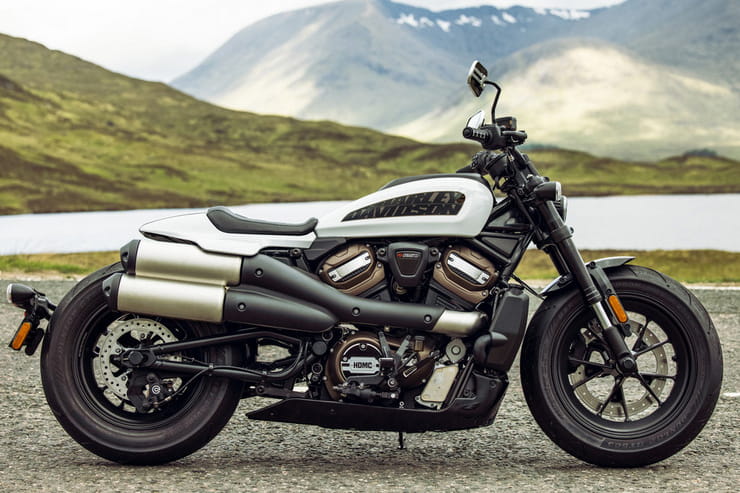 The Sportster S’s suspension is Showa, with 43mm upside-down forks allied to a Showa piggyback shock – no twin-shocks of old to be found here. There’s remote preload adjustment for the rear.

The rear wheel is a 16-incher clad in a 180-section tyre, while the front is a 17in rim with an oversized 160-section Dunlop GT503. Brembo supplies the brakes, with a single 320mm front disc and radial monobloc four-pot caliper, and a 260mm rear disc with a two-pot caliper.

Key dimensions include a low 755mm seat height, while both levers are adjustable to suit a variety of hand sizes. On board, the rider’s view includes a circular 4in TFT screen that can mimic a conventional analogue display or show a variety of other functions including front and rear tyre pressures and even diagnostic codes. Inevitably, there’s also Bluetooth connectivity with media and phone controls if you’re listening though a headset, showing album, track and artist, with bar-mounted buttons to operate menus and volume. 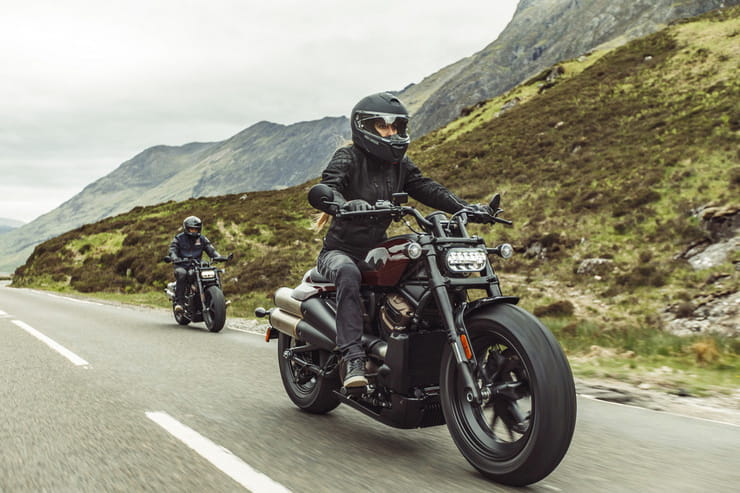 Being a Harley, accessories are a big deal. Packs include a mid-control conversion kit that moves the pegs from the stock forward position to a sportier, central spot, a pillion kit that adds a passenger seat and pegs, and an aftermarket ‘Sundowner’ solo seat option. There’s also a detachable screen available as well as a purpose-made tail bag.

If you’re bracing yourself for the sort of price tag normally associated with high-powered Harleys, you might find the Sportster S a pleasant surprise. After all, it’s a Sportster – and that’s traditionally the firm’s entry-level line. In the UK, the RRP is £13,999; by no means cheap, but given the Sportster S is set to be one of Harley’s highest-performance models, alongside the Pan America, it doesn’t seem excessive. For that, you get a choice of three colour options; ‘Vivid Black’, ‘Stonewashed White Pearl’ or ‘Midnight Crimson’.