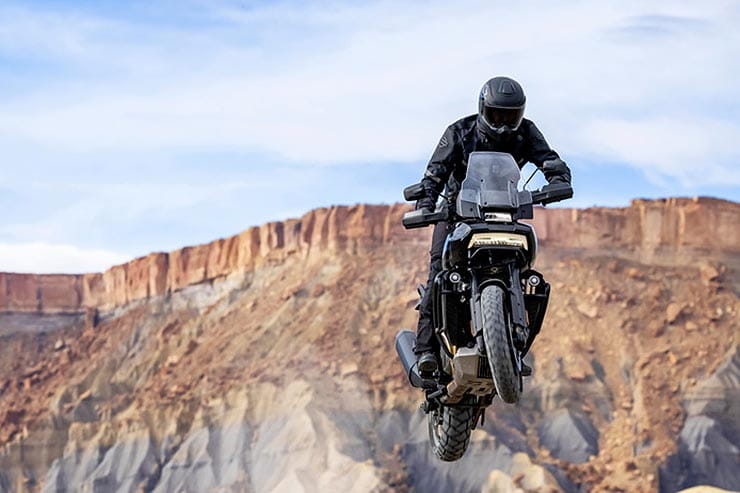 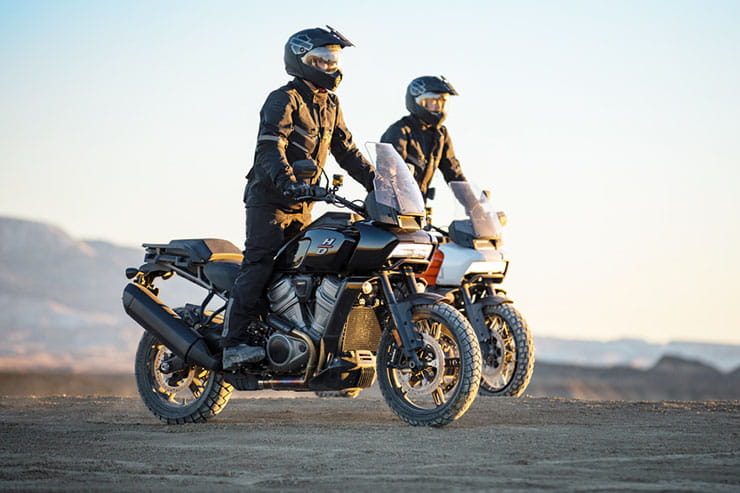 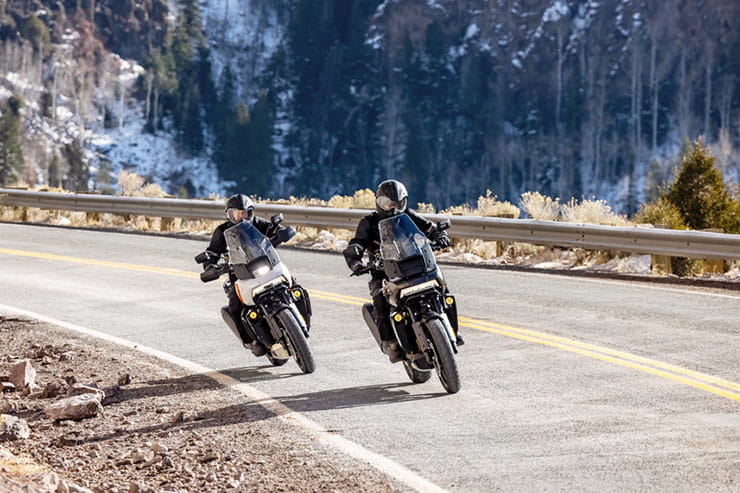 It’s been getting on for three years since we first saw Harley-Davidson’s Pan America as the centrepiece of the company’s now-dropped ‘More Roads to Harley-Davidson’ five-year plan. Now the production version has been officially unveiled and despite its familiar appearance hides surprises including variable valve timing for the new 150hp Revolution Max V-twin engine.

How much is the new Pan America?

There are two versions of the Pan America; the base version, starting at £14,000 and the higher-spec Pan America Special from £15,500. Both those prices only apply if you go for black paint, as other colours are extra – the base version has a grey alternative for a £250 upcharge while the Special gets metallic grey or green, each an additional £250, plus a two-tone orange-and-white scheme for £450. And then there’s a lengthy options list to further lighten your wallet, of course. 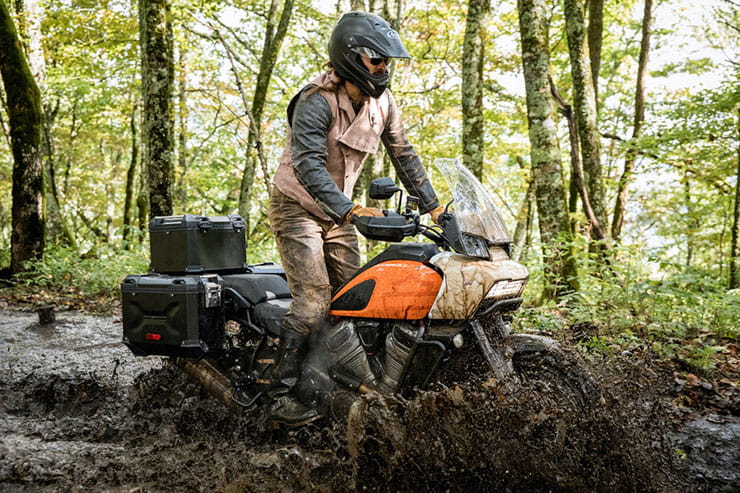 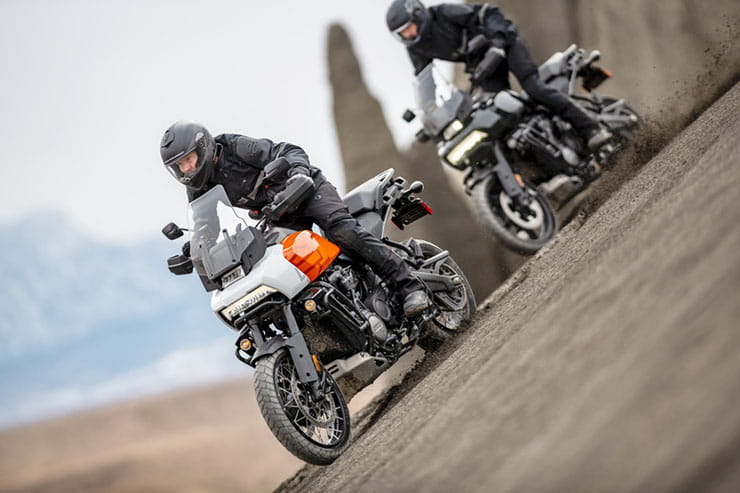 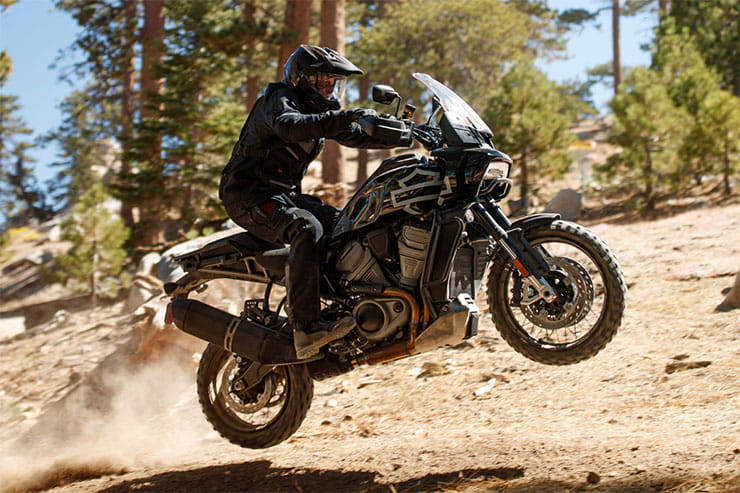 So, in short, the prices are bang-on when it comes to competing with the undisputed king of the adventure class, BMW’s R1250GS (which starts at £13,705), but how does Harley’s offering stack up in other respects?

Pretty well, as it turns out. The 1250cc V-twin engine is pretty much on a par with the 1254cc BMW boxer in terms of capacity but punches harder, with 150hp at 8750rpm compared to the German bike’s 136hp at 7750rpm. The tables are turned when it comes to torque, with the Pan America peaking at 94lbft and 6750rpm, the BMW at 106lbft and 6250rpm. The other performance-defining metric, weight, again puts the Harley a nose ahead, with a claimed wet mass of 245kg for the base Pan America and 258kg for Special, compared to BMW’s 249kg for the R1250GS and 268kg for the GS Adventure.

For some riders, the Pan America’s chain final drive will be seen as a disadvantage compared to the BMW’s relatively maintenance-free shaft, but a similar number will see it as a sportier alternative. 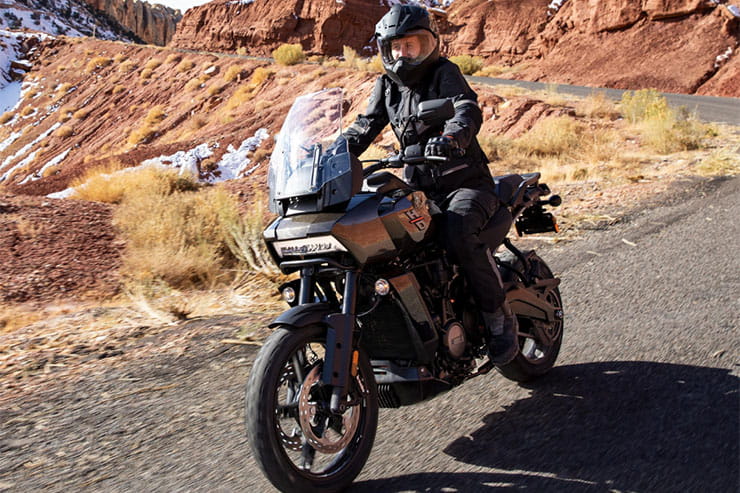 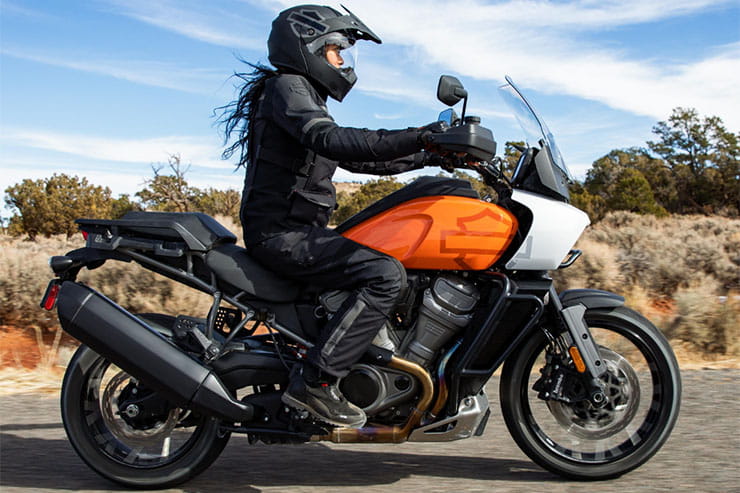 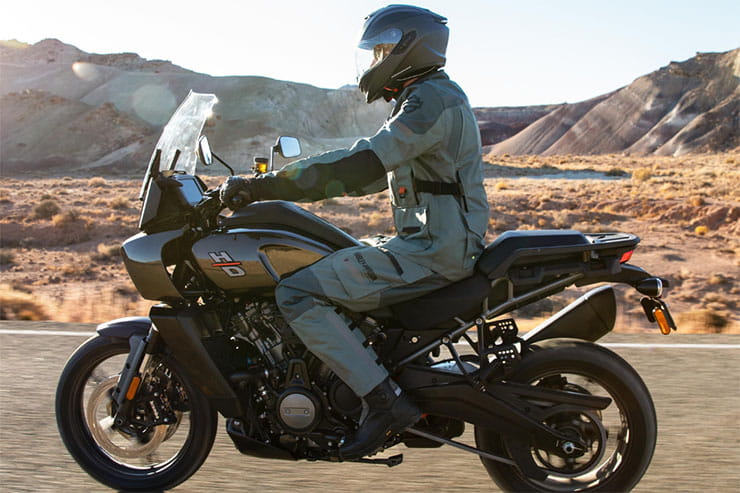 The heart of the Pan America is, of course, the 1250cc ‘Revolution Max’ engine, which is set to become the basis of multiple new machines in the years to come including Harley’s planned water-cooled custom model, which looks set to effectively replace the Sportster in Europe.

It's a completely new, 60-degree V-twin with DOHC cylinder heads (despite rumours elsewhere that it hid a four-valve pushrod valve system), that acts as a structural member of the Pan America’s chassis. There’s a rear frame section bolted to the back of the engine, incorporating the swingarm pivot and mountings for the bolt-on seat subframe, and a front frame section that bolts to the cylinder heads and leads to the steering head. It’s not dissimilar in concept to the thinking used in bikes like Ducati’s Panigale V4.

Although the angle between the cylinders is 60 degrees to keep it compact, the firing interval is a more traditional 90 degrees thanks to crank pins that are offset by 30  degrees. That means you won’t be hearing the traditional H-D ‘potato-potato’ noises from this V-twin, although the company says it’s put efforts into making the engine sound distinctive nonetheless.

The VVT is something of a surprise. Although not as sophisticated as BMW’s ShiftCam system, which alters the valve lift as well as its timing, the setup is on a par with the variable valve timing used on Ducati’s DVT twins. Like the Italian engines, the Revolution Max features a cam phaser on for each of its four camshafts, allowing the shafts to be rotated in relation to their sprockets to advance or retard the timing. The cams are chain-driven, so there aren’t any belts to be replaced, and servicing worries are also likely to be lightened by the inclusion of hydraulic tappets to make valve clearance adjustments a thing of the past.

Twin spark plugs per cylinder promise a better burn across the wide 105mm bore of each cylinder, and the engine’s balance is improved by a main balancer shaft in the crankcase and a secondary balancer in the front cylinder head, between the camshafts. Drive goes through a slipper clutch to a six-speed manual box. 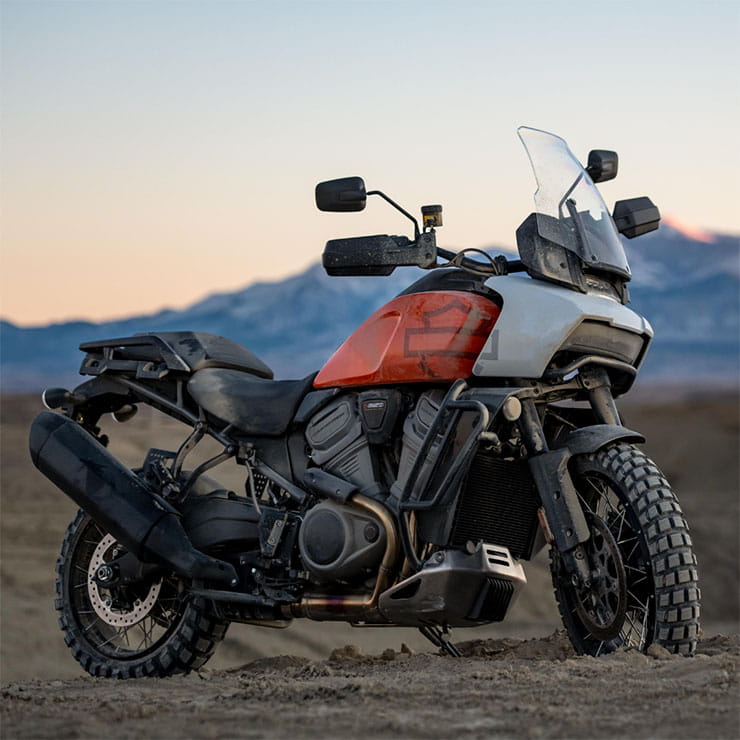 If it doesn’t sound very ‘Harley-Davidson’, that's probably intentional. After all, the Pan America is targeting riders who normally wouldn’t even turn their heads as they pass a Harley dealer.

It’s a similar story with the electronics, with the Pan America getting high-end kit as standard including multiple riding modes, cornering ABS, cornering traction control and, or the Special, semi-active suspension.

Both models use Showa kit, with 47mm BFF forks and a piggyback BFRC monoshock, all adjustable for preload, compression and rebound. The Special’s semi-active setup automatically adjusts the damping depending on conditions and riding style, governed by five profiles incorporated into the riding modes and even altering the rear preload automatically to account for the weight of the rider, passenger and luggage. Other Special-only kit includes tyre pressure monitors and a centre stand, as well as an adjustable brake pedal, alloy skid plate, a ‘Daymaker’ adaptive cornering headlight, heated grips, hand wind deflectors, and a steering damper. At additional cost (£600), the Special can also be equipped with adaptive ride height – a world-first system that alters the height of the bike on the move, bringing it down as you come to a halt to reduce the stretch to the ground and increasing it when you’re in motion, all with multiple settings available to adjust its response and actions.

Not that the base model is short of kit. Even the cheapest Pan America gets an adjustable screen, cruise control, an IMU, and hill-hold control.

The riding modes on offer include Sport, Road, Rain, Off-Road and Off Road Plus, each changing the ABS, traction control and engine braking settings (as well as the suspension settings on the Special). Off Road Plus goes as far as disabling the ABS on the rear wheel and deactivating the linked brakes. There’s also a custom mode that allows you to tailor your own settings for the engine torque delivery, traction control, ABS, throttle response and suspension settings, and a ‘Custom Off Road Plus’ mode that maintains the user’s performance choices but adds the other ‘Off Road Plus’ settings. 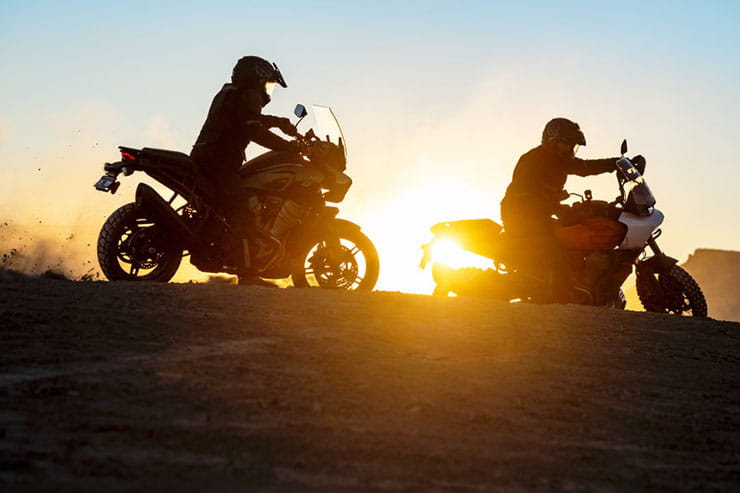 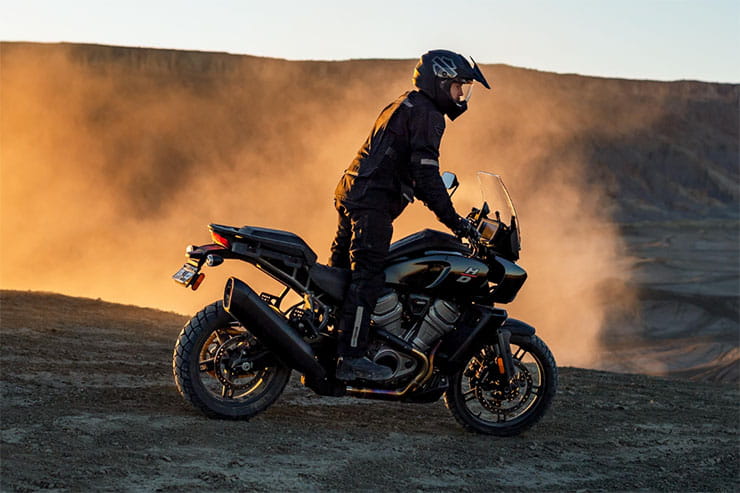 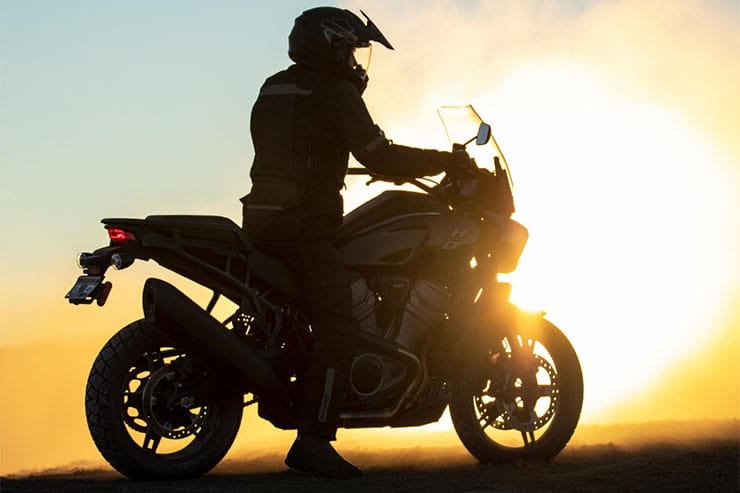 All this gets relayed to the rider via a 6.8in touchscreen on a tiltable mount (to accommodate standing or sitting riding positions), with bar-mounted controls to use on-the-go – the touch functions are disabled once the bike is moving.

Like a smartphone, the display can be customised by adding  ‘widgets’ to give the additional information of your choice around the central digital speedo and analogue rev counter readouts. As is becoming the norm, you also get navigation functions and infotainment controls and readouts once the display is linked to your smartphone by Bluetooth and to a helmet mounted Bluetooth speaker/intercom system, which will also give voice control for calls. The nav system can be set up to give either turn-by-turn readouts or as a moving map, which takes over the main section of the display and relegates the speedo and other readouts to a smaller section at the top.

Of course, the initial purchase price is always just the start with an adventure bike and the Pan America is no different, with a host of optional extras set to join the machine when it goes on sale this summer.

Options will include three distinct luggage ‘systems’. ‘Sport’ luggage is a set of removable side cases and a top box designed to integrate with the Pan America’s styling. ‘Adventure’ luggage means soft cases, and of courses there’s the inevitable ‘Aluminium’ range made of alloy flight case-style boxes. There are also optional seats, bar risers, a centre stand (standard on the Special), alternative pegs, a Screamin’ Eagle exhaust and air cleaner, and wire wheels, of course, which are available on the Special only as a factory-fit part. These carry tubeless tyres and retain the same dimensions – 19in front, 17in rear – as the standard alloys. You can also get bash plates, radiator guards, a headlight guard, extra LED lights, heated grips and alternative windscreens that are either 4.5in lower or 2.5in taller than the stock one.

Finally, Harley has tied in with REV’IT! to offer a range of adventure riding kit that matches the Pan America, including jackets, trousers, gloves, a brace of helmets and boots for both men and women.