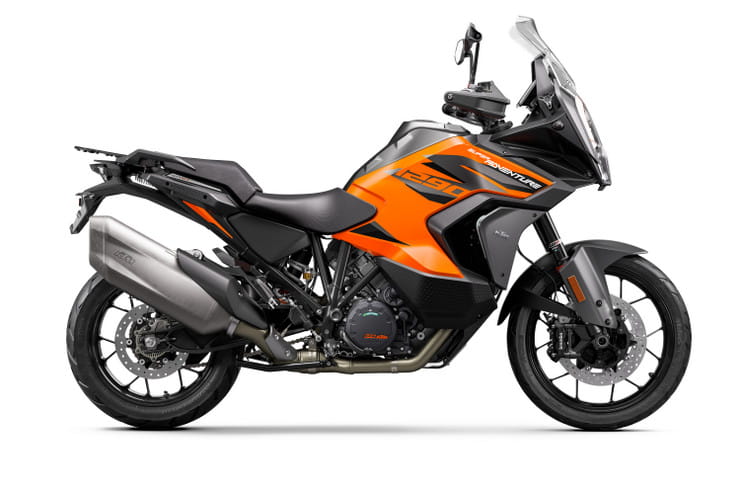 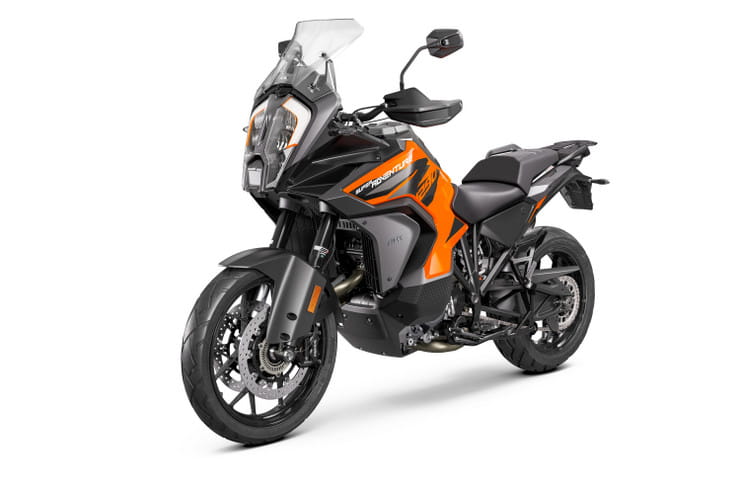 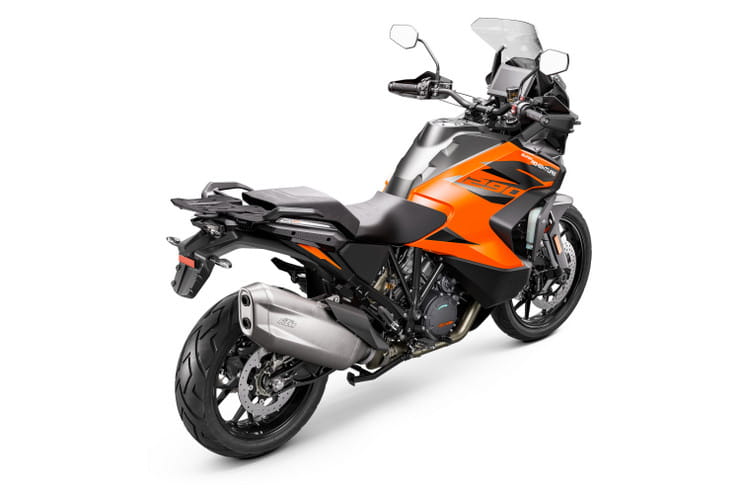 It’s been a long time coming but KTM has finally unveiled its completely revamped 2021 1290 Super Adventure S – the first bike in the world to come with radar-assisted safety kit as standard.

It was way back in August 2019 that we saw a near-final version of the Super Adventure on test, and as long ago as May 2018 that KTM confirmed it was developing a forthcoming production bike using radar-assisted cruise control tech and demonstrated the system on a prototype. After such a long gestation period you’d expect the new 1290 Super Adventure to be something special, and it’s certainly much more than a quick facelift of the old model. 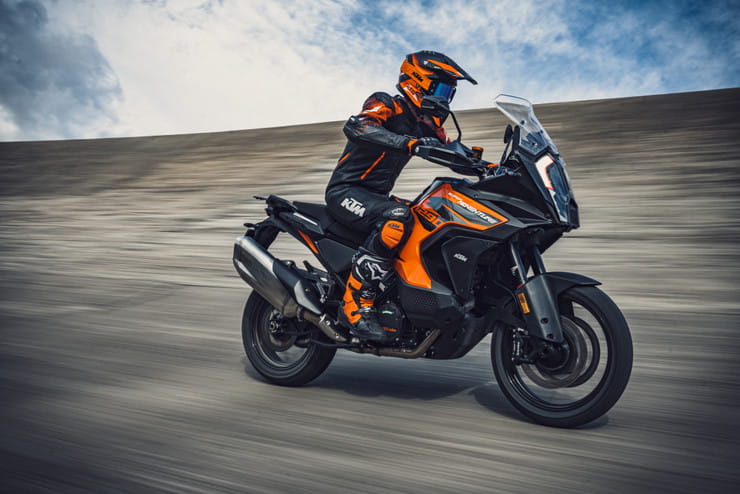 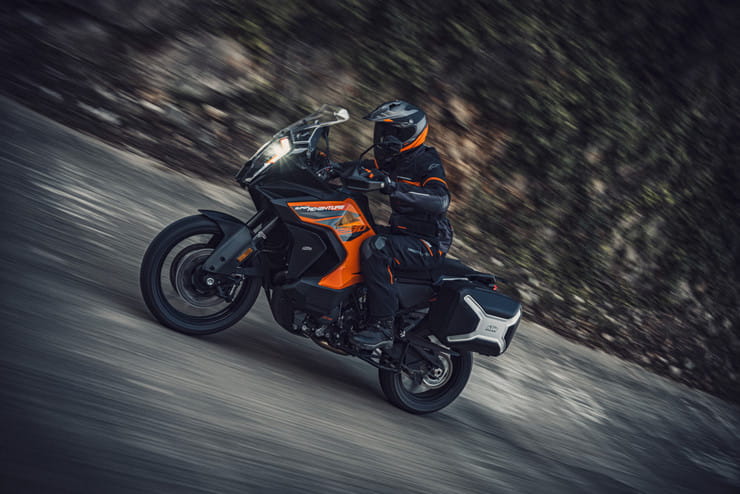 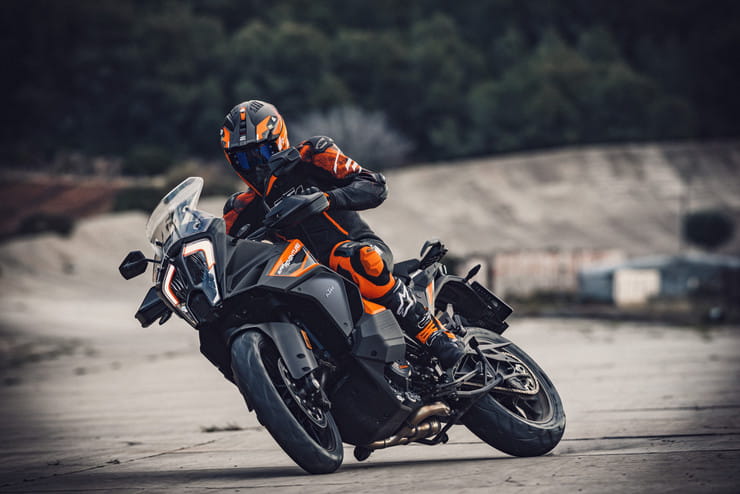 On paper, the engine’s headline specs – 160hp and 102lbft of torque from 1301cc – are barely changed. In fact, the old version had 1lbft more on tap and hit its peak power fractionally lower in the rev range, at 8750rpm rather than the 2021 model’s 9000rpm. But the similarities belie the depth of changes made to the LC8 V-twin.

Reworked to meet Euro5 emissions rules, the 2021 bike gets thinner-walled engine cases, cutting 1kg from the motor’s mass, along with a completely new exhaust, new coils, revised internal oil passages and a new clutch. On top of that there’s a new airbox and a reworked gearbox with a lighter shift drum to make for smoother changes, all the more so when allied to the bike’s optional quickshifter.

All that is bolted to a frame that’s been completely redesigned. Still a steel trellis, it holds the engine in a different position, rotating it forwards by two degrees, and puts the steering head 15mm further back than before for a shorter 1557mm wheelbase (down from 1580mm) to improve agility. At the back there’s a redesigned swingarm sitting below a completely new, forged aluminium subframe that lowers the seat (now adjustable from 849 to 869mm, previously 860 to 875mm).

The new fuel tank, which KTM refers to as a ‘three-cell design’ has two side-mounted sections like the 890 Adventure, freeing up space for the lowered seat and the new airbox above the engine. At 23 litres there’s just as much capacity as before, but most of the fuel in carried in the fairing sides rather than between your legs. The filler is still in the conventional spot, though, and the two side tanks are interconnected so they fill and drain in unison. The redesigned bodywork also means improved ergonomics, with a hand-adjustable screen that can be raised 55mm higher than before.

Overall, KTM says the bike weighs ‘approximately’ 220kg dry, which is 5kg more than the old version. However, dry weight is a poor indicator of real-world mass and once loaded with fluids and a full tank of fuel the Super Adventure will be significantly heftier than either of those figures. 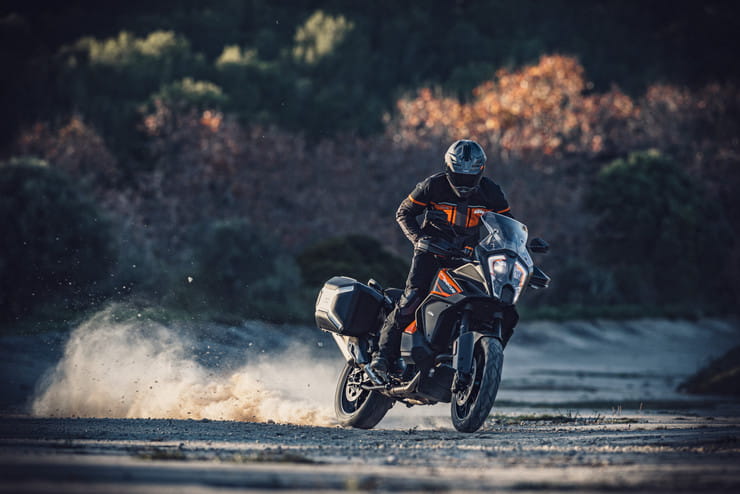 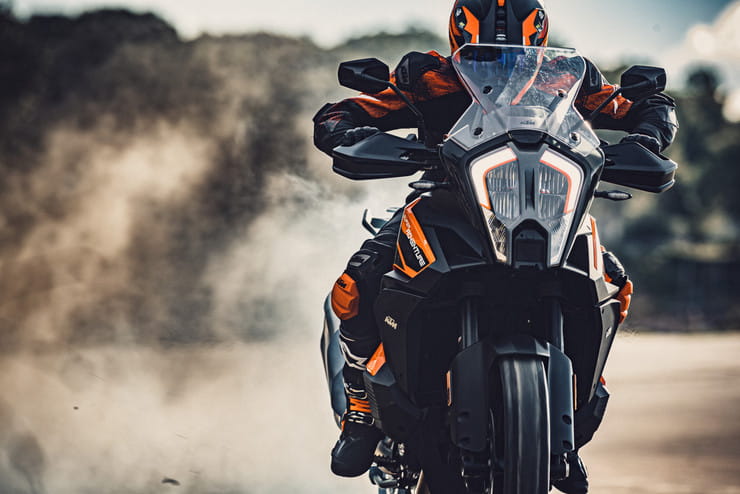 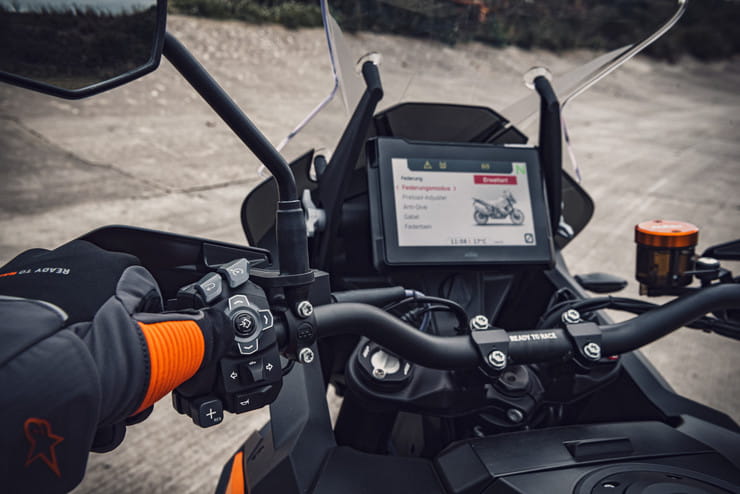 All this is underpinned by the latest version of WP’s semi active ‘APEX SAT’ suspension, which adjusts the damping in real time as you ride, using inputs from stroke sensors, the bike’s six-axis inertial measurement unit and the throttle and brakes to react to changes in surface or riding style. There’s optional anti-dive for the forks, too, and the system can be set to three modes – comfort, street or sport – with two more (off road and auto) as an optional extra.

As has become the norm, all these settings can be accessed via a large, colour TFT dashboard that also gives control over the bike’s unique selling point, the radar-assisted cruise control.

Although beaten to the punch by Ducati and BMW, which offer the same Bosch-developed radar system as an optional extra on the Multistrada V4 and 2021 R1250RT respectively, the KTM is the first bike to get the system as standard equipment.

Like its rivals, it can be used above 30km/h (18mph), although KTM doesn’t allow the system to be used above 150km/h (93mph) while BMW and Ducati both allow their versions to remain active until 160km/h (99mph). KTM gives five settings for the distance the system will keep from vehicles ahead and includes an ‘overtake assist’ that gives a short burst of acceleration when needed. It remains active during gearchanges regardless of whether you have the quickshifter option or not, and deactivates when either brake is used. There’s a conventional cruise control mode, too, that doesn’t use the radar. 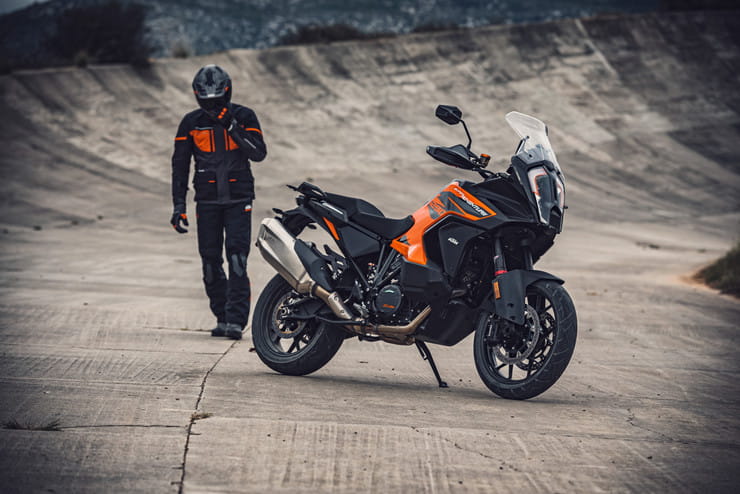 One surprising omission is the rear radar that features (optionally) on Ducati’s Multistrada V4 S to give blind spot warnings. When KTM first demonstrated its prototype radar-equipped bike in 2018, the blind spot system was a significant part of the setup, but the firm appears to have decided against its use in the final production model – mirroring the decision made by BMW in its radar application on the 2021 R1250RT.

The rest of the bike’s rider aids are much as you’d expect – a suite of kit including multi-mode traction control that can adapt to ‘rain’, ‘street’, ‘sport’ and ‘off-road’ settings, with a ‘rally’ mode that allows additional wheelspin, with nine settings and multiple throttle response maps, as an optional extra.

As on so many other 2021 bikes, the TFT dash has phone connectivity to give turn-by-turn navigation, music and call control via Bluetooth. It can also display tyre pressures and everything is controlled via new switch units on the bars.

Keyless ignition is standard, as is increasingly common, but KTM has added an ‘ARA’ anti relay attack system that means you need to activate the system manually before using it (it stays active for 10 minutes once activated). The slight inconvenience means that relay attacks, where thieves use sophisticated tech to con your bike and key fob into thinking they’re close to one another when they’re really a long distance apart, should be foiled. If convenience is more important than security, the ARA system can be disengaged entirely for a conventional keyless experience. 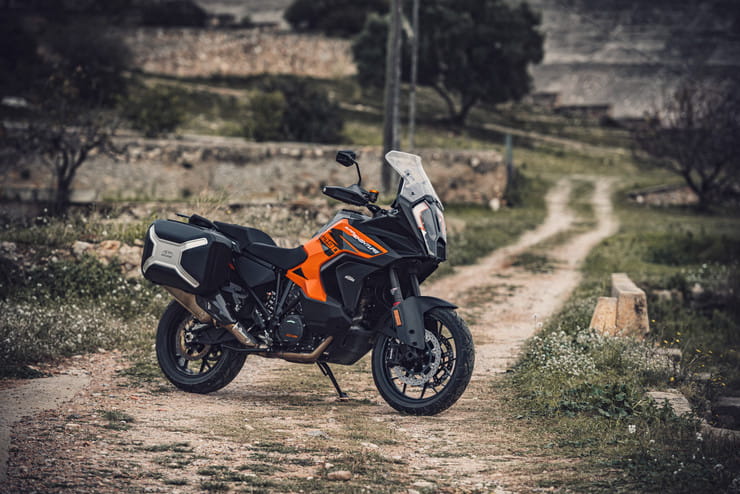 Optional extras for the Super Adventure include a ‘Rally Pack’ with the rally riding mode, adjustable throttle response and adjustable traction control, a ‘Suspension Pro’ pack with more adjustment, switchable anti-dive and extra suspension modes, and a ‘Tech Pack’ that features both Rally Pack and Suspension Pro options as well as engine braking control, hill hold control, the quickshifter and an adaptive brake light.

Bolt-on extras include an Akrapovič slip-on, tank bag and a touring case set with 70l of space in a pair of purpose-made panniers.

We might have known about the new Super Adventure S for a while thanks to spy shots and leaked information, but there’s one aspect that comes as a big surprise: despite all its extra tech, the 2021 1290 Super Adventure S is £600 cheaper than its direct predecessor, with an RRP of £14,999. Bearing in mind that Ducati and BMW both charge at least £500 extra for the radar option on their machines, and both the Multistrada V4 S and the R1250RT are more expensive than the Super Adventure S anyway, it’s something of a bargain for any rider who’s desperate for the radar cruise experience. 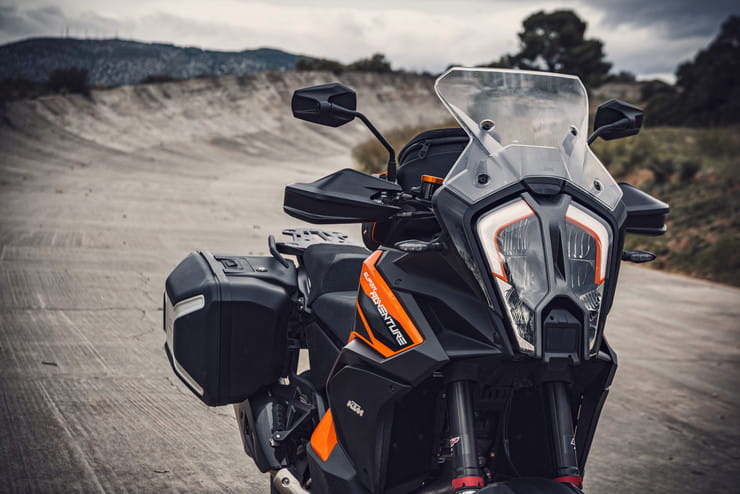