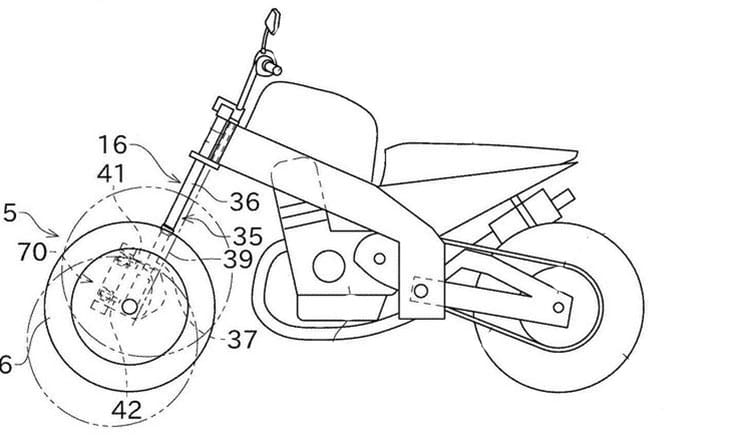 The market for leaning three-wheelers has been slowly growing for more than a decade following the launch of Piaggio’s MP3 but as traditional boudaries between cars and bikes become ever more blurred manufacturers are showing increasing interest in the idea.

Kawasaki has already designed several tilting trikes and even launched its own brand for leaning three-wheeled pedal-electric machines, but now the firm is working on a system to convert conventional two-wheeled bikes into Yamaha Niken-style three-wheelers. 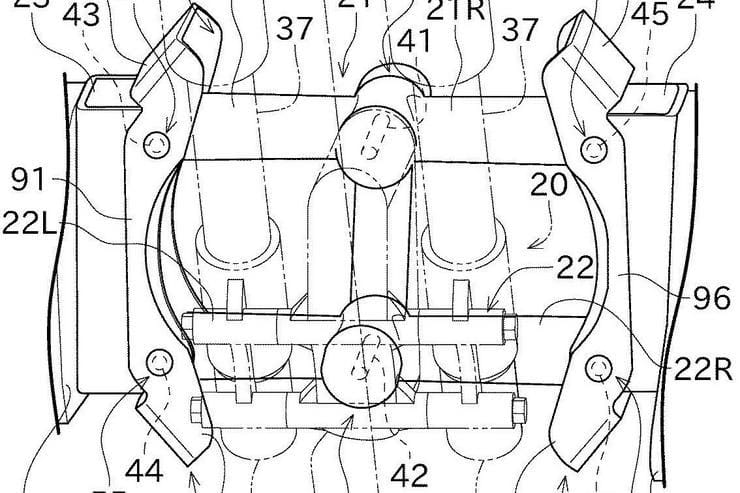 Like them or not, it’s easy to see the potential appeal of tilting trikes. They offer the manoeuvrability of two-wheelers but an added safety net in the form of extra front-end grip and stability. What’s more, in some circumstances (depending on details like the distance between the two front wheels) they can be ridden by car licence holders, removing a massive obstacle from the path of commuters who want the benefits of bikes but don’t want to jump through hoops to get them.

Current machines on the market, typified by the MP3 and Yamaha’s Niken and Tricity models, are all vastly different to conventional bikes, with dedicated chassis designs and complex front suspension and steering systems to enable the three-wheeled layout. However, Kawasaki’s new patent shows a design that could be applied to any normal motorcycle with the bare minimum of changes. 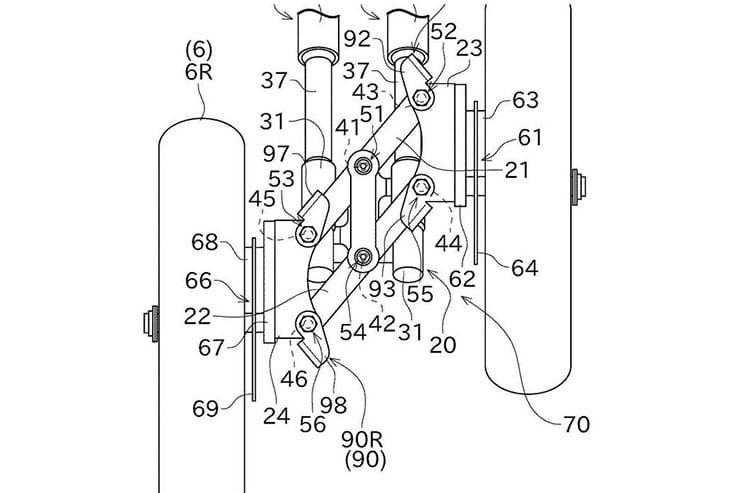 The idea is remarkably simple. Leaning reverse-trikes like the MP3 and Niken usually have tilting front end systems made up of two parallel beams running transversely across the bike, pivoting at the centre and with an individual suspension system – either sliding forks or a leading-link setup – mounted at either end, one for each front wheel. Kawasaki ditches that approach and instead places the tilt system and front hubs at the bottom of a set of very normal-looking front forks.

As with other systems, the bike and two front wheels tilt as one thanks to a parallelogram linkage between the front uprights, pivoting at the centre so the front wheels adopt the same lean angle as the main body of the bike while remaining firmly on the ground.

The idea has the disadvantage of adding the tilting system to the unsprung mass of the bike but it massively simplifies the suspension and steering side of things and allows a completely normal motorcycle frame to be used. 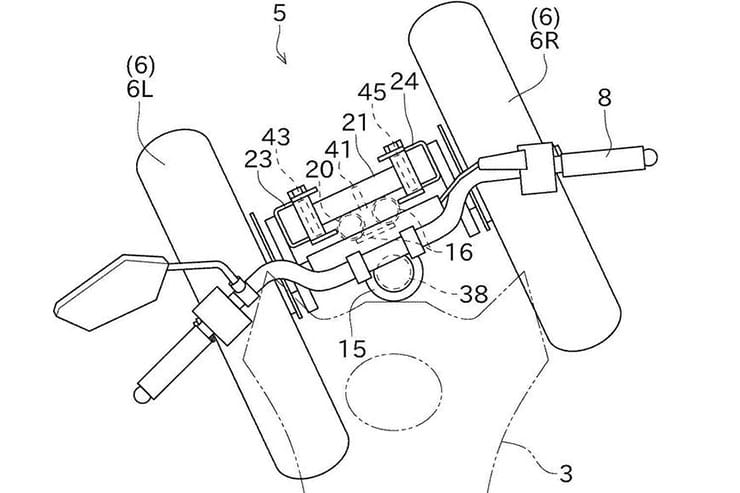 The system is an evolution of an earlier Kawasaki idea, which again put the tilting system at the unsprung end of the suspension but featured a front swingarm system instead of normal forks, requiring a complete redesign of the frame and steering. The new version gets rid of that complexity.

When it comes to steering, that could be a huge advantage. Normal leaning trikes have linkages between the bars and front wheels, potentially robbing the rider of the detailed feedback they’re used to getting from conventional forks that give a direct connection between the rider’s hand and the front tyre. On the Kawasaki design, the entire tilting system turns with the bars, with no linkages or joints required.

Kawasaki has also suggested that the angle of tilting system – when seen from the side – could be altered in relation to the forks. In the initial layout, with the tilting setup running parallel to the forks, the inside front wheel moves backwards and the outside one forwards as the bike leans into a turn. Alternatively, the parallel links can be arranged so they’re directly above each other, eliminating the front-rear movement of the wheels as they rise and fall. According to Kawasaki’s patent, the latter arrangement (below) adds more stability. 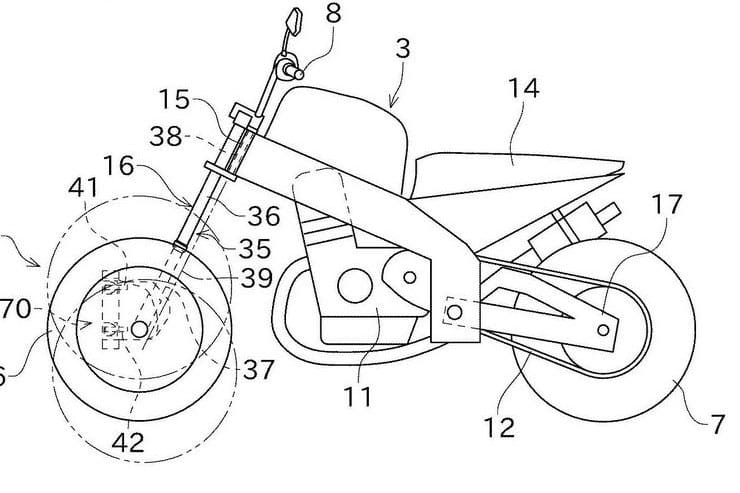 We’re not expecting to see a leaning three-wheeled Kawasaki superbike any time soon. For the sake of comparison, the firm spent at least five years filing patents around its supercharged engine designs before the Ninja H2 was finally launched with the resulting power unit.

However, Kawasaki did recently launch a leaning trike in the form of its pedal-electric ‘Noslisu’ – an entire sub-brand aimed at creating a new type of inner-city commuter vehicle – and way back in 2013 the company’s ‘Concept J’ show bike explored the idea of superbike-style leaning multi-wheel machines. Yamaha is plotting higher-performance leaning three-wheelers in future and Honda also experimenting with the idea, so it looks like tilting trikes are here to stay. 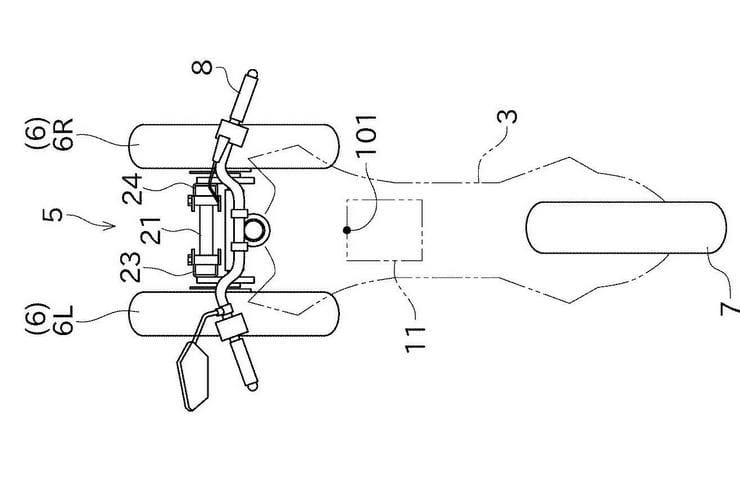