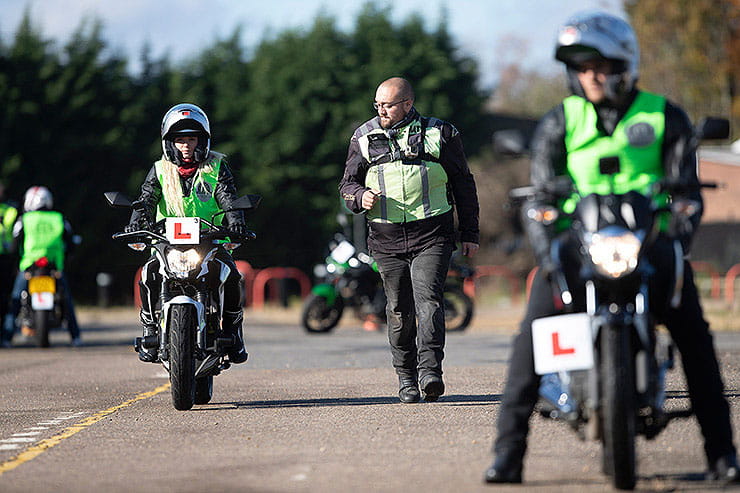 With every day that the current lockdown continues a growing number of L-plate riders are finding their CBT certificates are expiring – and there’s currently no way to renew or extend them.

All motorcycle training and testing has been brought to a halt under the current lockdown rules, including the CBT certification system that requires provisional licence holders to undergo a one-day training course before they get on the road with L-plates. Not only does it mean that people who want to start riding during the lockdown can’t do it, but since CBT certificates expire after two years it means that people who already rely on their bikes are losing their entitlement to ride with no way to regain it. People including essential workers using bikes to commute, and delivery riders who rely on their bikes for a livelihood, are being left in the lurch.

We highlighted the issue earlier this month, and now the topic has been tabled as the subject of an Early Day Motion in the House of Commons, which means it could be selected to be debated by MPs.

The Early Day Motion, EDM 1462, was tabled by Jonathan Edwards, independent MP for Carmarthen East and Dinefwr. It reads:

That this House notes that Compulsory Basic Training (CBT) certificates for motorbikes and mopeds are issued on a two year basis for learner drivers; further notes that these vehicles provide a low carbon mode of transport for passenger and cargo; notes that many key workers use this mode of transport as part of their commute, especially in rural areas where public transport links can be poor; notes that as a result of lockdown measures, motorcycle and moped tests are suspended; expresses concern that road users whose CBT certificates lapse whilst lockdown measures are in place are prohibited from using their vehicles on public roads through no fault of their own; notes that whilst road safety concerns are paramount, motorists in this position have been using their chosen mode of transport for two years; calls for a temporary extension of CBT certificates whilst lockdown measures are in place; and further calls on the Government to annul test fees for people with CBT certificates which have lapsed during the current lockdown if they will not extend their validity.

Earlier this month, the Motorcycle Action Group (MAG) raised the issue with the Government, but Baroness Vere, Minister for Roads, Buses and Places replied that there was no intention to budge on the subject, saying: “The Government’s position remains that it has no current plans to extend the validity period for CBT pass certificates. Motorcyclists are one of the most vulnerable groups of road users. Riders will need to complete another course if their CBT certificate expires to continue riding, or ideally, take further training to take and pass a motorcycle test to put themselves in the best and safest position longer term.”

While Early Day Motions are rarely debated in the House of Commons, they serve the purpose of bringing subjects to the attention of MPs and allowing them to indicate their support. By writing to your own MP and asking them to support EDM 1462 there’s a chance to highlight the problem to the Government and, potentially, have the issue addressed. You can find your MP’s details via this website.

Strangely, this issue was not a problem during the first lockdown last year, when the Government addressed the problem by allowing motorcycle training and testing, including CBTs, to continue for essential workers. A simpler solution, as suggested by Jonathan Edwards, would be a temporary extension to CBT certificates for the duration of the lockdown.

Last week the Government decided to reintroduce a limited program of driver training and testing, but it’s restricted to ‘emergency workers’ (NHS and social care workers, emergency service workers and council employees) who both need to drive and respond to ‘threats of life’ as part of their job. That means it’s no help to people who rely on bikes and CBTs for commuting or for jobs that don’t qualify under those strict limits.

Bennetts PR, Brand & Events Manager, Luke Brackenbury, took the opportunity to reiterate the insurer's stance, “If a customer takes out a policy with Bennetts and their CBT runs out during the period of their insurance, we will not be cancelling their policy. We will advise the customer that given their inability to renew their CBT is completely out of their control, and indeed a result of lockdown restrictions, their policy will remain in force. We will make it very clear that they must renew their CBT as soon as CBT centres are open and that it is a legal requirement to have a CBT in place to ride on the roads, but they can be at least reassured that their bike is protected against theft, and ready for the moment they can take their test and ride again.”