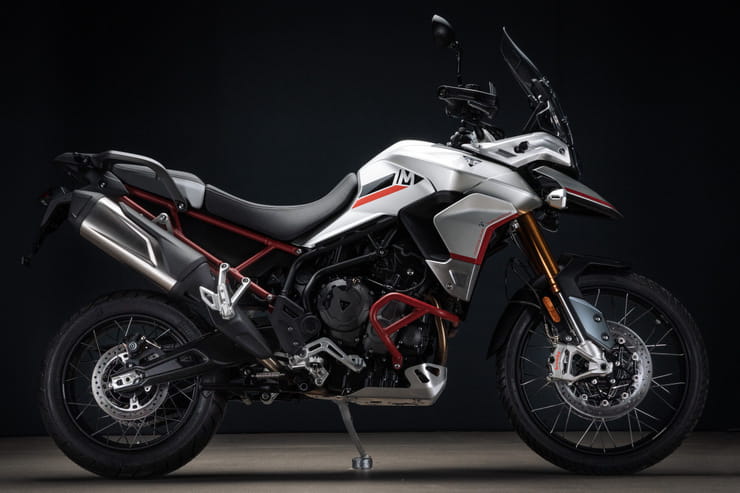 It’s been 31 years since Triumph revealed its first range of ‘Hinckley’ machines at the 1990 Cologne show and now the millionth machine of the John Bloor era has rolled off the production lines.

A Tiger 900 Rally Pro, the millionth Bloor Triumph has been given special attention including a unique paint scheme to mark its status and it’s set to get pride of place in the firm’s Factory Visitor Experience. There it will form the centrepiece of a display marking Triumph’s 120th anniversary as a motorcycle manufacturer in 2022.

Featuring silver paint and special graphics, the custom Tiger 900 Pro will make its debut on the firm’s stand at Motorcycle Live at the NEC, starting on 4th December, before taking up its position at the firm’s Hinckley home. 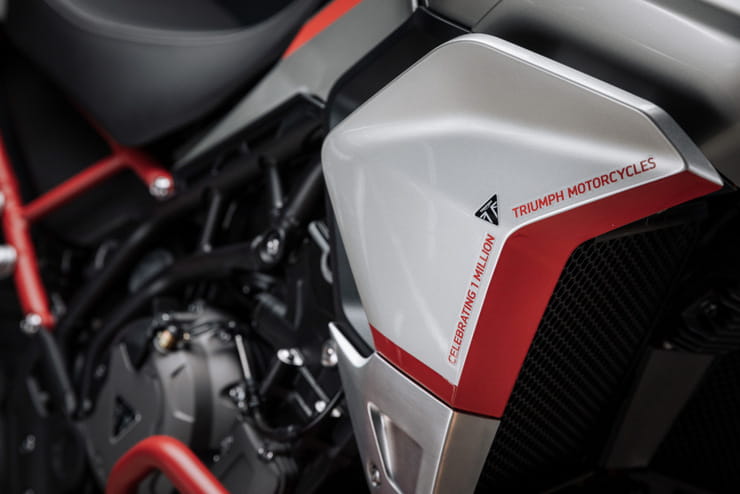 While the Bloor-era bikes were first seen in public in 1990, the project to revive Triumph had already been underway for years.

John Bloor embodies the idea of a self-made billionaire, having left school at 15 and, after starting out as a plasterer, set up a building company – Bloor Homes – that became the one of the largest in the country. He bought the Triumph name and rights to manufacture bikes bearing it when Triumph Engineering – often referred to as Meriden Triumph, after its home base – went into receivership in 1983. That was the start of a long journey that led to the creation of Triumph Motorcycles Ltd, referred to as ‘Hinckley’ Triumph after the Leicestershire town where its HQ and initial factory were built, and an entirely new range of machines.

Where the previous iteration of the company had suffered, along with most of the British bike industry, due to its failure to address the onslaught of fast, cheap, reliable bikes from Japan during the 1970s, Bloor and his team adopted Japanese-influenced production methods from the start. The result was a British bike firm that, despite its familiar name, was unlike any that had gone before it. A million motorcycles later, with that Hinckley base now a headquarters responsible for all R&D and overseeing manufacturing facilities in Thailand and assembly plants in India and Brazil, it’s fair to say it was the right approach. 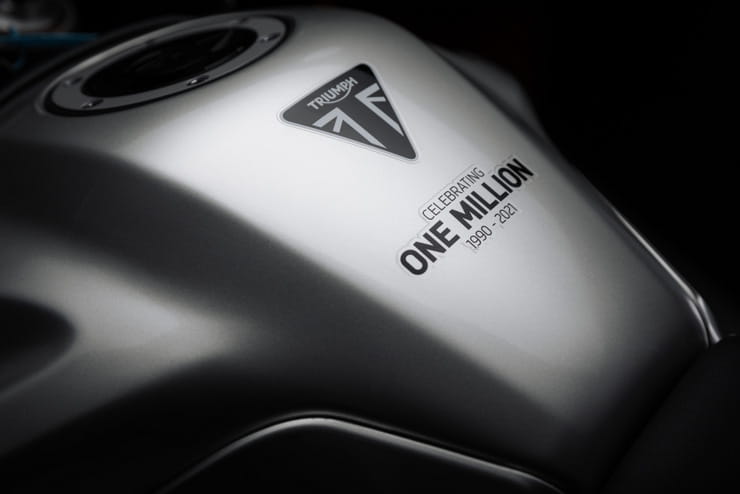 Nick Bloor, John’s son and current Triumph CEO, said: “Everyone at Triumph is incredibly proud to have played a part in achieving such a momentous moment in the modern history of this iconic brand. Over the 31 years since we re-launched Triumph with a new line of British designed motorcycles in Cologne in 1990, we have shared so many great moments with our fans across the world. From returning to the TT champions arena, to entering the MotoGP paddock with our Moto2 Engine partnership to supporting the biggest global riding event and its great cause for health and wellbeing with the Distinguished Gentleman’s Ride, to mention only a few.  Triumph’s success has always stemmed from the passion and commitment we share with our riders.

“Over the last three decades Triumph has maintained sustained and significant investment in our people, our partners and our in-house design, engineering and manufacturing capabilities, in order to grow the reach and reputation of this iconic British brand. This investment in home grown talent, both in the UK and around the world, matched by the passion we share with our riders for delivering the complete and perfect motorcycle, has seen the brand go from strength to strength, achieving the most successful year in the brand’s entire 120-year history.

“Furthermore, we are committed to taking the brand to even greater heights, and with the forthcoming launch of our brand-new Tiger 1200, new competition MX and Enduro motorcycles, plus our strategic partnership with Bajaj to create smaller capacity bikes, I am delighted to say that the future for Triumph and its fans across the world will be just as exciting and rich as the last 30 years has been.” 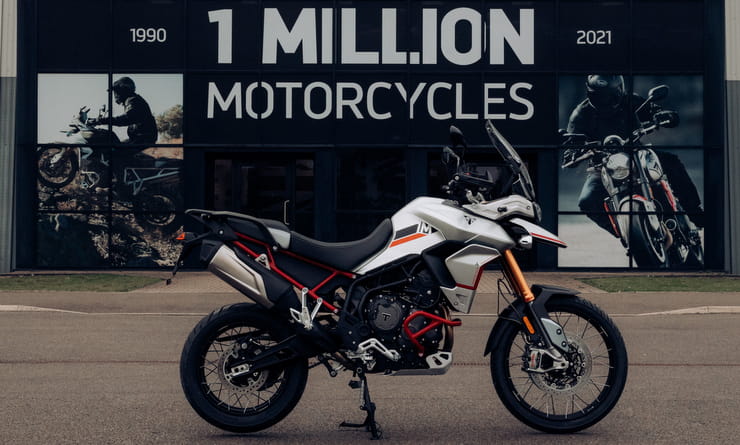 The millionth ‘Hinckley’ Triumph happens to coincide neatly with the firm’s upcoming 120th anniversary as a motorcycle maker, which will be celebrated throughout 2022 with a series of events starting in January and going on throughout the year – with details of each due to be announced as they get nearer.

Triumph actually started life earlier still, in 1886, when German immigrant Siegfried Bettmann rebranded his eponymous bicycle import company to carry the ‘Triumph’ name. Over the coming years, the company turned to manufacturing its own bicycles, setting up shop in Coventry, before Bettmann saw that motorcycles were the up-and-coming technology and started to develop powered versions of those bikes. In 1902, the first true Triumph motorcycle went on sale, featuring a 220cc Minerva engine, marking the company’s birth as a motorcycle manufacturer that will be celebrated in 2022.

After that, off-the-shelf JAP and Fafnir engines were used until Bettmann’s business partner, Maurice Schulte, developed the company’s first in-house single-cylinder design that would go on to be the basis of bikes for years to come. It was a development of this motor that powered the company’s first TT-winning machine, at only the second running of the event in 1908.

Triumph branched out into cars in 1923 (the car operation that was sold off in 1939 but kept using the Triumph name right into the 1980s), and was bought by Jack Sangster, owner of Ariel, in 1936. That move brought together Ariel engine designer Edward Turner and Triumph to form a pairing that would go on to define Triumph’s post-war era, with Turner’s engines, starting with the 1937 Speed Twin, going on to power a host of famous models, most notably the Bonneville, which remained the firm’s mainstay right until the company fell into receivership in 1983, opening the door to Bloor’s carefully constructed revival. 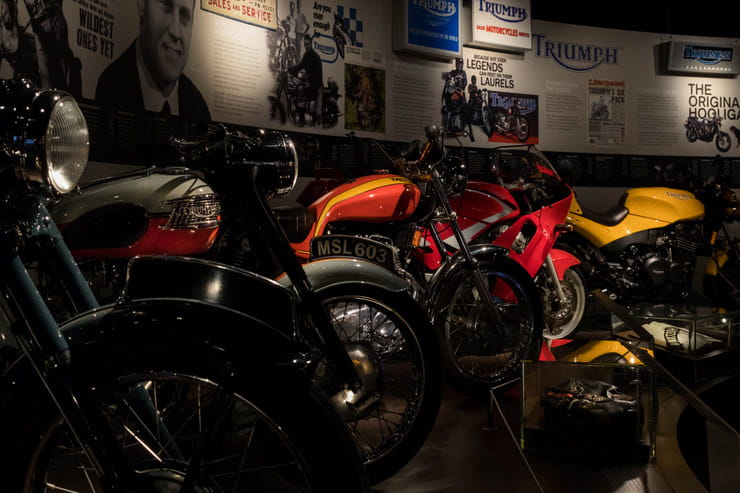 No doubt Triumph will be celebrating all this history and more during the company’s 2022 events, but the company won’t want to be reminded that its centenary celebrations in 2002 were marred by the famous fire that ravaged the Hinckley factory in March that year.

The rebuild coincided with the construction of the company’s first Thai manufacturing plant, which would be joined by a second factory in 2006 and a third in 2007.

Since 2020, all mass-made Triumphs have been manufactured in Thailand, where the firm also has its own casting and injection moulding facilities, allowing it to go from raw materials to complete bikes in one place. There are also assembly plants in India and Brazil to cater to local markets, while the company’s Hinckley base remains the headquarters and home to Triumph’s main R&D facility. Limited-edition bikes, like the high-end ‘TFC’ Triumph Factory Custom models, are also made in the UK.

With nearly 120 years of motorcycle manufacturing under its belt, Triumph isn’t showing any sign of slowing down. 2021 looks set to be the firm’s most successful year ever, with over 75,000 bikes manufactured and a turnover of £650 million, and over the last 12 months the firm has also revealed the first clues to its direction over the years to come.

First was the unveiling of the TE-1 electric bike chassis and motor, created in association with Williams Advance Engineering, which is an ongoing project to create a class-leading electric bike. First announced two years earlier, in 2019, the project’s performance and range predictions – 177hp and 120 miles per charge – along with a light 220kg mass, promise to revolutionise the electric motorcycle market.

More recently still, in July 2021, Triumph surprised the world by announcing plans to create a completely new range of motocross and enduro models, and to enter them into top-level competition. With Ricky Carmichael and Ivan Cervantes on board to steer the project, hopes are already high.

It might have taken 31 years to get to the millionth Bloor-era Triumph, but at the rate the firm is going we will see the two-millionth bike much, much sooner than that. 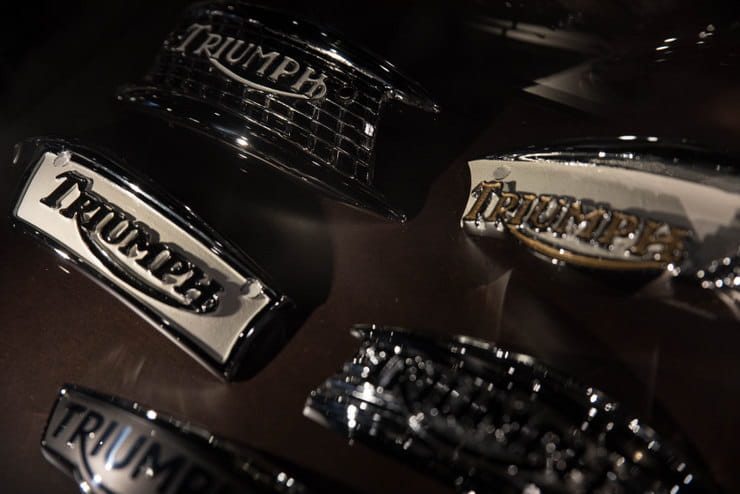