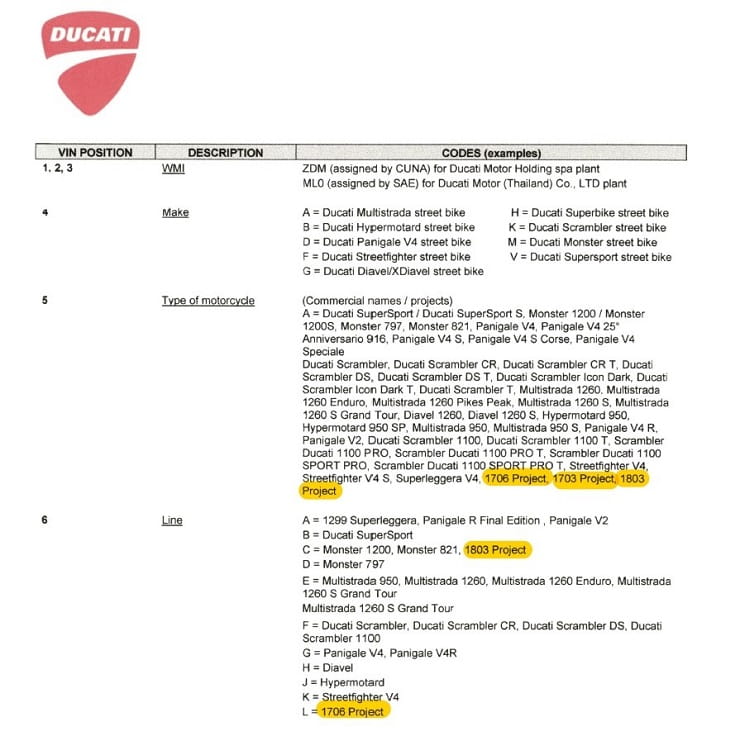 Three brand new Ducati models coming in 2021 have been revealed by new American documents – but at the moment only via their codenames.

The firm filed paperwork with the National Highway Traffic Safety Administration (NHTSA) to explain how to decode the VINs (vehicle identification numbers) of its 2021 model range, including code letters referring to models that don’t yet exist in the line-up.

Under the list of models in the range, as well as all the current machines, the NHTSA paperwork lists three ‘Project’ models – ‘1703 Project’, ‘1706 Project’ and ‘1803 Project’. Each of these will be a new 2021 model under a different title when the full line-up is revealed later this year. But what are they?

Fortunately for us, the same document also gives a bit more insight into the bikes. The easiest one to nail down is ‘1803 Project’, which is a new water-cooled Ducati Monster model.

We know this because the bike will be given the letter ‘C’ as the sixth character in its VIN, a trait that’s shared by Ducati’s two existing liquid-cooled Monsters; the Monster 1200 and Monster 821.  Since Ducati has also been spied testing a liquid-cooled Monster with an all-new aluminium chassis instead of the steel trellis frame that’s been a signature of the model since its 1993 launch, it seems a sure-fire certainty that ‘1803 Project’ is this new alloy-framed, water-cooled Monster. 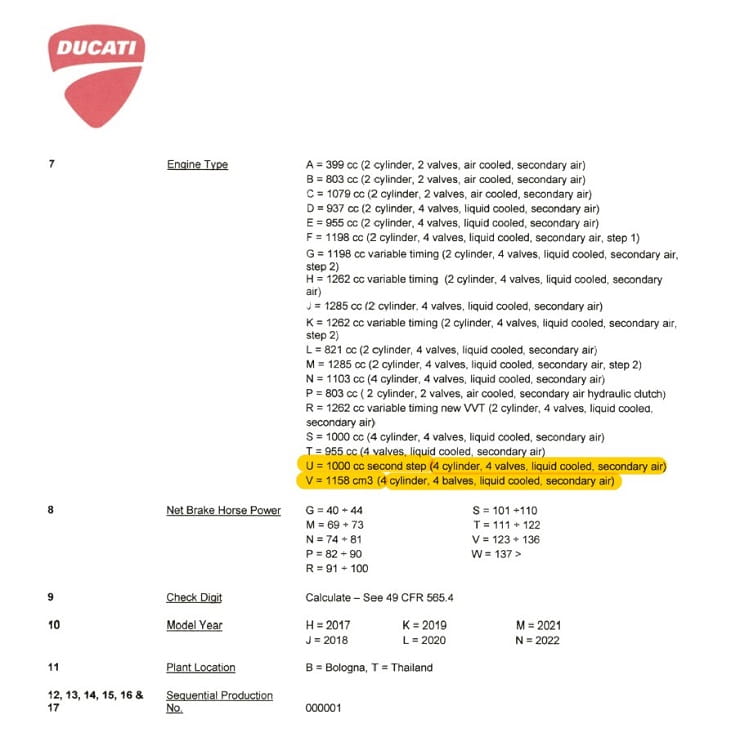 The ‘1706 Project’ is also fairly easy to identify. Its title shows that it’s a design that’s been under development for a while (for comparison the Superleggera V4 was ‘1708 Project’ and was already complete and type-approved before the end of 2019), and it’s given a unique sixth letter in its VIN. Only ‘1706 Project’ bikes will get the letter ‘H’ there, so it’s a machine that stands alone from the rest of the range in terms of its combination of engine layout and body style. The one bike we know that fits that description and is definitely coming in 2021 is the Multistrada V4.

Ducati’s NHTSA filings also dribble a little more information about the new Multistrada V4 by revealing that there will be an 1158cc V4 engine in its 2021 model range alongside the existing 1103cc version (used in the Panigale V4 and Streetfighter V4) and the 1000cc version used in the Panigale V4R. The larger capacity is a perfect fit for the Multistrada V4, suggesting a longer stroke (56.2mm instead of the 1103cc V4’s 53.5mm would bring it to 1158cc while keeping the existing 81mm bore). That would make for a torquier, lower-revving V4 that’s better suited to the Multistrada’s touring and adventure roles.

That just leaves the ‘1703 Project’, but again there are clues as to what it might be. We’re least certain about this one, but the indications are that it’s an updated version of the Panigale V4R.

There are two main clues. One is that the Panigale V4R is missing from the list of bikes that are named in the document, and the other is that the firm lists a new version of the 1000cc V4 engine.

The WSBK-legal 1000cc engine of the current, 2020 Panigale V4R is identified by an ‘S’ as the seventh character of the VIN. However, Ducati’s new document says that bikes with the letter ‘U’ there will have a ‘second step’ version of the 1000cc V4. That makes sense as the original V4R’s engine wasn’t Euro5 approved, and Ducati has a history of upgrading its homologation-special ‘R’ models every two years (the current V4R has been unchanged in 2019 and 2020).

We’d expect chassis and aerodynamic tweaks as well as engine changes for the 2021 V4R as Ducati tries to secure its first WSB title since Carlos Checa won back in 2011.

These aren’t the only new Ducatis for 2021. We’ve already revealed that a ‘Diavel Lamborghini’, a ‘Multistrada Enduro Grand Tour’ and a Scrambler 1100 PRO Dark are coming next year, but these are all expected to be special-edition versions of existing machines, not requiring specific VIN identifiers like the new ‘1703 Project’, ‘1706 Project’ and ‘1803 Project’.