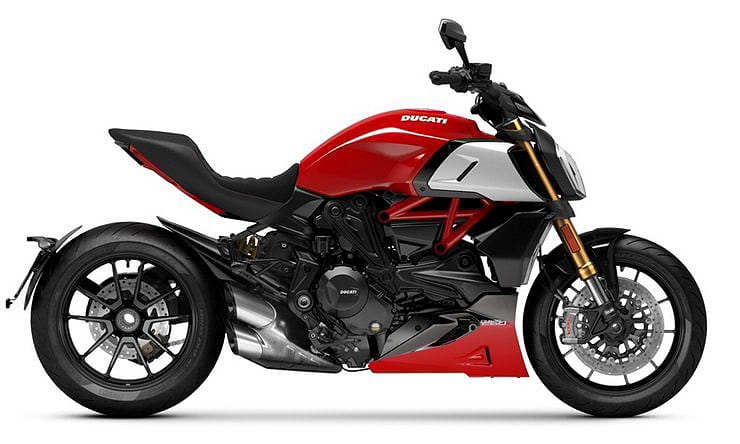 A Ducati Diavel ‘Lamborghini’ is coming in 2021. Like this, but wilder-looking.

Ducati has been on a roll recently with at least one major new model and multiple significant updates released every year – and 2021 will be no different as information emerges on the firm’s planned line-up.

We already know that the headline news for Ducati’s 2021 model range will be the launch of the Multistrada V4. The firm has made no secret of its existence and its plans to have it in showrooms next year. Lower down the range it’s going to be joined by an alloy-framed Monster 821 replacement that will start a revolution as lesser Ducatis start to desert the classic steel trellis frame. But there will also be several other, less revolutionary new Ducatis launched soon.

Now American emissions documents from the Environmental Protection Agency have revealed three minor new models that will be added to the 2021 range; the Diavel Lamborghini, the Multistrada Enduro Grand Tour and the Scrambler 1100 PRO Dark.

The Diavel Lamborghini is perhaps the most intriguing of the new bikes. Ducati is, of course, owned by the massive Volkswagen group, but more specifically it’s under the wing of its close neighbour Lamborghini, which is in turn a subsidiary of Audi which is owned by VW. Clear? Good.

Really, Ducati and Lamborghini are aligned because it makes sense. Both are famous, low-volume, enthusiast-targeted Italian brands with a reputation for high-performance machines with stunning styling. The two firms have been linked before, with the Lamborghini name appearing on the Pramac Ducati MotoGP machines, and in 2021 the partnership is getting cemented with the Diavel Lamborghini.

The emissions documents reveal that the bike’s engine specs aren’t any different to the normal Diavel – so it’s a 1262cc, 159hp beast – which means when the Diavel Lamborghini is launched it will be a cosmetic makeover, no doubt including a smattering of high-end components and probably offered in limited numbers.

Our guess is that it will be a departure from the normal Diavel in terms of colours. Usually, Ducati’s muscle-cruiser is seen in black, grey or occasionally red, where Lamborghini is often associated with vibrant yellows and eye-searing greens 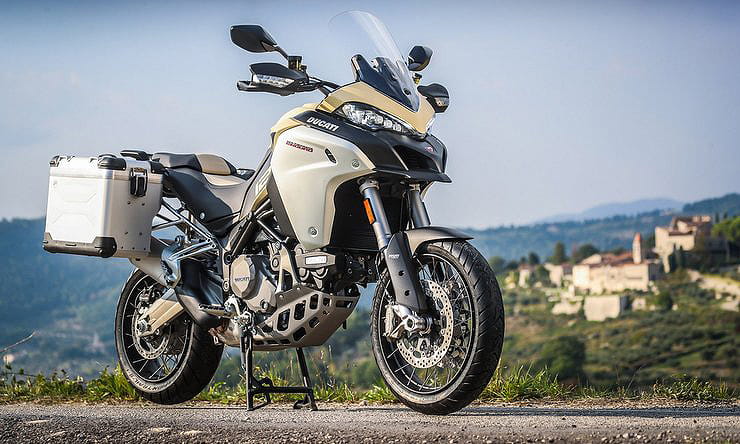 This is a normal Multistrada Enduro with optional panniers. The Enduro Grand Tour will probably look a lot like this, though.

The Multistrada 1260 Enduro Grand Tour is pretty self-explanatory. You can already buy a Multistrada Enduro – complete with wire wheels and a tough, off-road-oriented chassis with a double-sided swingarm – or a Multistrada Grand Tour with luggage and comfort-based specs.

So the Multistrada 1260 Enduro Grand Tour will be a combination of the two; an off-road-capable machine that also features the luggage, electronic gadgets and comfort of the Grand Tour.

It makes a lot of sense. Fully-kitted Adventure versions of BMW’s R1250GS are among the most popular variants despite high prices and the fact that few owners are likely to use them to the limits of their abilities. So a high-end version of the Multistrada Enduro is sure to fly out of showrooms, too. Think boxy aluminium side cases, fog lights and crash bars.

As with the Diavel Lamborghini, the EPA documents don’t show any change to the bike’s 1262cc, 158hp V-twin engine. 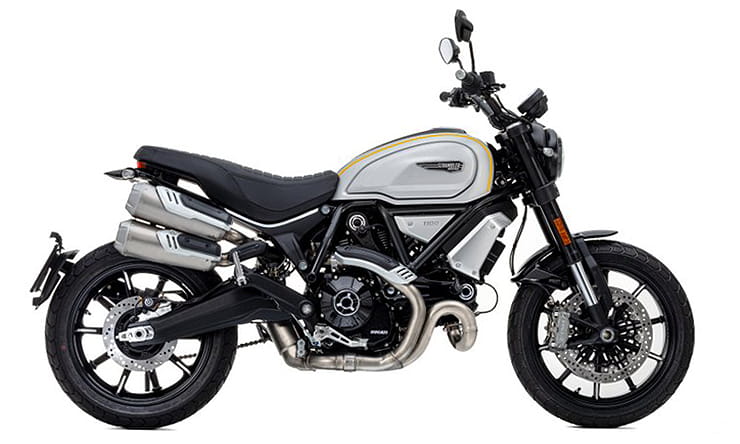 Ducati’s Scrambler 1100 PRO Dark will be like this, but black…

Ducati’s Scrambler 1100 PRO and Sport PRO appeared late last year as a fairly minor tweak to the Scrambler 1100 range – and the addition of a ‘Dark’ version shouldn’t come as a surprise.

‘Dark’ has long been used by Ducati as a tag for slightly down-graded, cheaper versions of its bikes. Inevitably offered only in plain black, ‘Dark’ models usually offer the chance to save a few hundred quid without sacrificing much, if anything, in terms of performance or handling, provided you’re prepared to limit your colour choice.

There’s no engine change for the Scrambler 1100 PRO Dark, so you’ll still get the same 86hp V-twin.

All three new machines are likely to be launched at a dedicated online event later this year alongside the rest of Ducati’s 2021 model range.