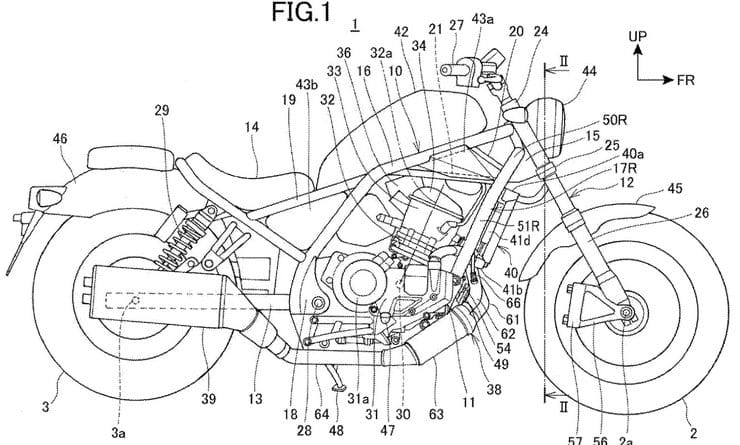 Honda’s been rumoured to be working on an Africa Twin-engined cruiser for years now but this is the first time we’ve seen concrete evidence of the project in the form of detailed patent applications for the machine.

The firm has filed two patents with the US Patents and Trademarks Office for aspects of the bike, clearly showing that it uses the seamless-shift DCT transmission version of the Africa Twin’s 1084cc, 101hp parallel twin. Not only do we see the distinctive cover that hides the two clutches of the DCT transmission, but the head-on images in the patent clearly show that there’s no clutch lever on the left hand bar or shifter by the rider’s left footpeg.

The patents themselves revolve around relatively mundane aspects of the bike – one relates to the rear shock design, the other the arrangement of the front engine mounts, radiator and exhaust sensors – but that actually goes to emphasise that this is a machine that’s having its final details hammered out. 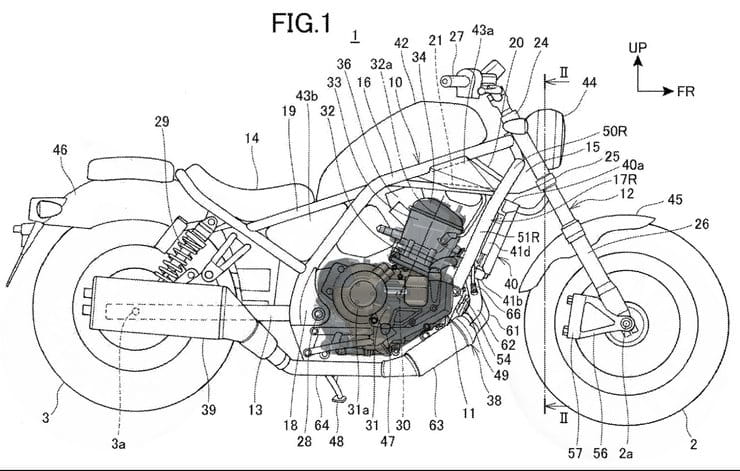 While the patent clearly shows a Rebel-style outline, the chassis is inevitably completely new to suit the Africa Twin engine. Designed to keep the adventure bike as light and compact as possible, externally it’s a remarkably small engine for its capacity – potentially giving the Rebel 1100 a significant advantage over bigger, heavier cruisers and bobbers that it will compete with. While 101hp isn’t earth-shattering for an engine of this size, it’s more than enough to make for a convincing cruiser engine, too, and gets coupled with plenty of low-end torque in the Africa Twin.

Given the success of Triumph’s Bonneville Bobber, it’s clear that V-twins aren’t the only game in town when it comes to cruisers in the 21st century. In the smaller capacity classes, the Rebel 500 and Kawasaki’s Vulcan 650 have both been selling well, too, showing that parallel twins work well in this style of bike. Since Honda currently has no European-market cruiser models larger than the Rebel 500, there’s clearly a gap for a bigger version of the same idea. In the USA it still has the ancient Fury 1300 and Shadow 750 V-twins, as well as the CTX700N, in its line-up, but the Rebel 1100 would be a useful addition there, too. 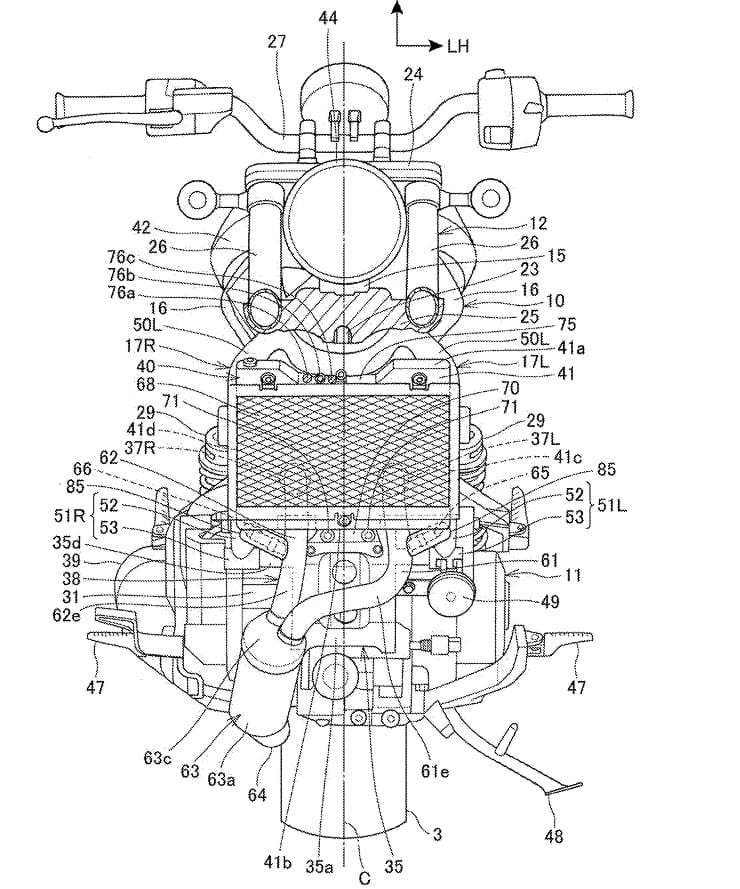 The images in the patents might be simplistic, but the designs show that the machine has right-way-up forks with radial brake calipers, twin remote-reservoir rear shocks and a fairly large, twin-exit exhaust on the right hand side.

The head-on view shows that the low-mounted engine and bulky silencer will limit cornering clearance, although the pegs will be the first parts to touch down.

In terms of layout, the bike is resolutely conventional. While the Africa Twin has its airbox split into two sections and mounted either side of the headstock, with twin radiators on the sides to help keep the wheelbase short, the Rebel has a single radiator fitted in the usual spot, the airbox behind the cylinders and the fuel tank fitted above the engine.

However, we have recently seen that Honda is working on a supercharged version of the Africa Twin’s engine, and once that design is up and running it’s not beyond the realms of possibility that it could find its way into the Rebel as well to create a more powerful, dragster-style machine. 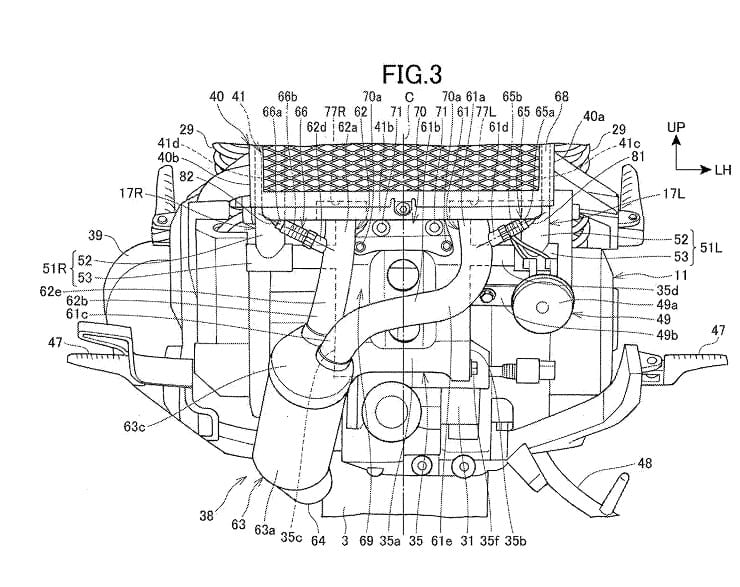 As ever, it’s worth remembering that patents alone aren’t a guarantee that a bike will reach production, and even though the Rebel makes a lot of sense and is likely to be a project that Honda pursues further, it could still be months or even years before we see the bike in the metal. There’s no indication that it will be part of the 2021 range, so it’s likely to be 2022 at the earliest – and perhaps 2023 or beyond – before it’s available.

Earlier this year, other patents also suggested Honda is developing a naked roadster-style bike around the Africa Twin engine. The implication of these designs is that the big 1084cc twin will eventually follow the same pattern as the 471cc twin that appears in the CB500 naked bike, CB500X adventure model and Rebel 500 cruiser. 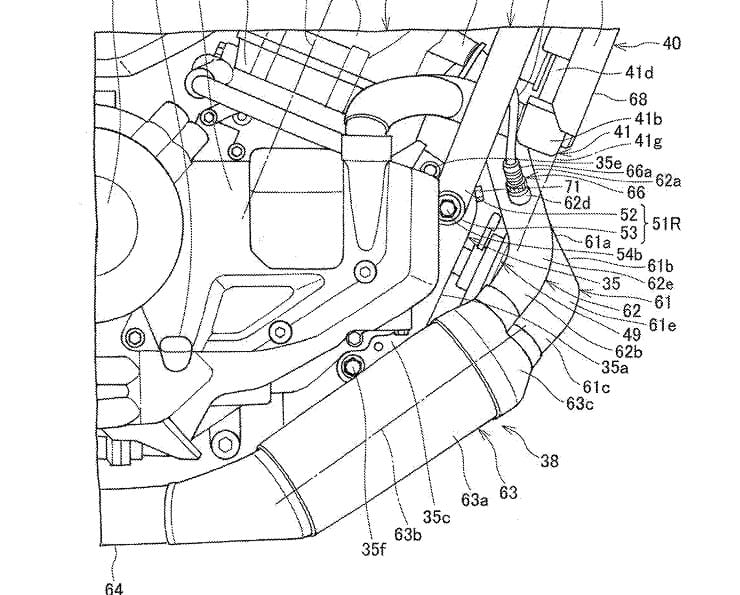