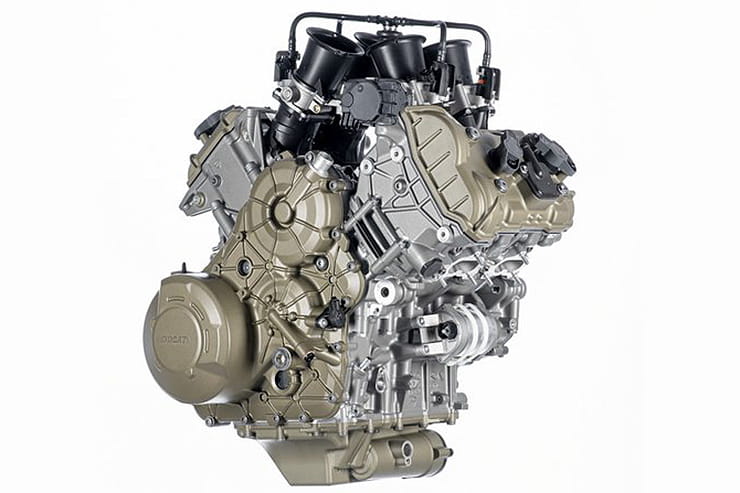 Desmodromic valves have been Ducati’s headline technology since the 1950s but just as the firm proved that it can step away from its signature V-twins by launching the Panigale V4 it’s dropping Desmo on the Multistrada V4.

While we’ll have to wait until next month to see the Multistrada V4 in full, Ducati has released details of the new ‘V4 Granturismo’ engine that powers it. As we suspected, the bike’s capacity gets a hike from 1103cc to 1158cc, although surprisingly it’s been achieved via a bigger 83mm bore instead of the superbike’s 81mm, while keeping the same 53.5mm stroke. We say surprisingly as that means the engine – which shares its bottom end with the Panigale V4 - has enough ‘meat’ in the cylinders for bigger bores, raising the spectre of a big-bore Panigale in the future if Ducati decides its superbike needs more power. Normally, manufacturers making a torque-focussed, lower-revving bike like the Multistrada V4 would be expected to increase stroke instead of bore. 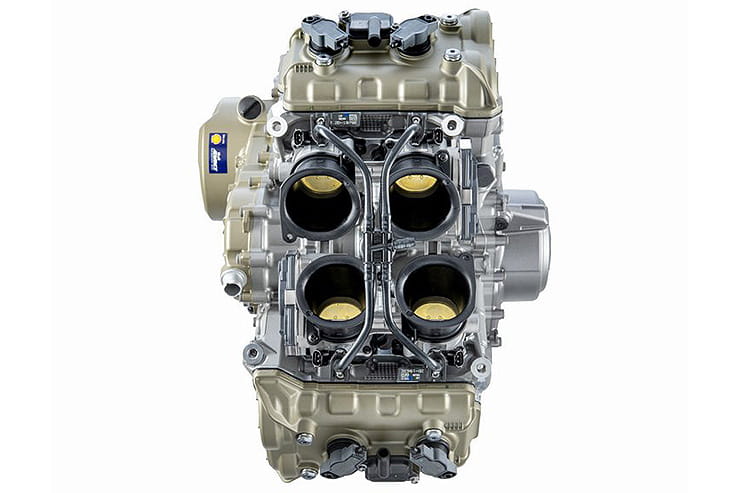 However, that surprise is nothing compared to the biggest design change of all on the Multistrada V4’s engine; the decision to drop the desmo valve system.

It’s a technology that Ducati is so closely aligned with that it’s arguably a bigger move than the shift from V-twins to V4s for its superbikes. So after years of hammering the message that Desmo is best, how does Ducati justify the turnaround?

Actually, it makes a lot of sense for the Multistrada V4 to use conventional valves, closed by springs, instead of the desmodromic system that uses rockers and extra cam lobes to shut them. Desmo offers advantages in terms of outright power – ridding the engine of the mechanical losses involved in forcing valves open against stiff springs and using a positive valve closing system that eliminates the possibility of ‘valve float’, which is when sprung valves stop following the profile of the cam lobes at very high revs. However, it’s also expensive, with extra components, and it’s susceptible to wear on the cam lobes and rockers involved in the desmo system. That means all long-term Ducati owners will be familiar with expensive and regular valve adjustable services to make sure the clearances remain correct.

The Multistada V4, though, isn’t obsessed with power. Despite the fact that the 1103cc Panigale V4 engine is good for around 214hp, and the Multistrada V4’s is 55cc bigger, the adventure bike is only rated at 170hp. And those are metric horses rather than our more muscular imperial ones – in which it measures just over 168hp. That’s only 10hp more than the existing Multistrada 1260 V-twin, and the older bike edges the V4 in terms of torque, with 95.5lbft compared to 92.2lbft on the new one. 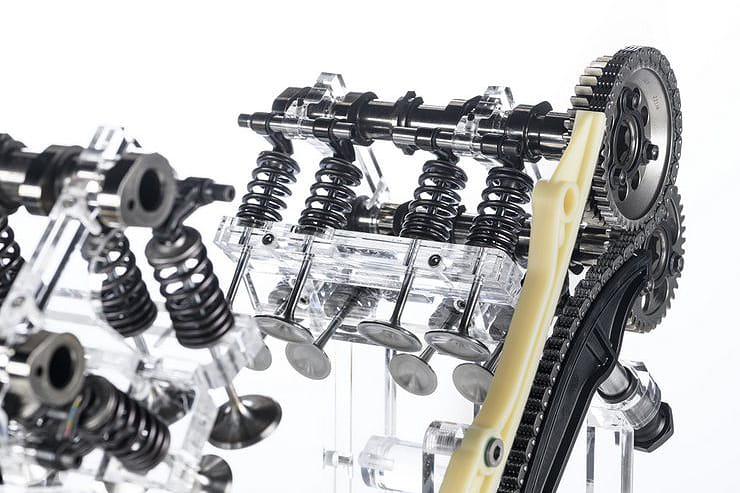 Since the Multistrada V4 isn’t stretching its engine to the max in terms of potential power, that means the benefit of desmo valves isn’t used – so it makes sense to switch to cheaper, simpler valve springs instead.

What’s more, that change means Ducati’s valve adjustment services, which are needed at 30,000km at the most on desmo engines, can be doubled to 60,000km. The Multistrada V4 still needs oil changes at 15,000km or every two years, and an air filter swap at 30,000km, but the big valve adjustment is put off until 60,000km, which for many buyers means it’s something that the second or third owner will have to worry about, rather than them.

With a relatively small boost in power compared to the Multistrada 1260, and fractionally less torque on tap, the Multistrada V4’s performance edge over its older sibling – which will remain on sale alongside it – will come from a reduction in weight as much as from the increase in power. Although full details won’t be released until next month, Ducati says the V4 engine is more compact than the V-twin Testastretta – shorter in both length (by 8.5cm) and height (by 9.5cm), and only 2cm wider, it’s also 1.2kg lighter.

As on the Panigale, it has Ducati’s counter-rotating crankshaft to offset the gyroscopic effect of the wheels, giving better handling, and the same ‘twin pulse’ firing order.  New intake and exhaust ducts, smaller valves and smaller oval throttle bodies help skew the engine’s character towards torque instead of power, while the crank, clutch, rods, pistons and flywheel are all specifically designed for the Multistrada, adding rotating mass for a greater feeling of torque. 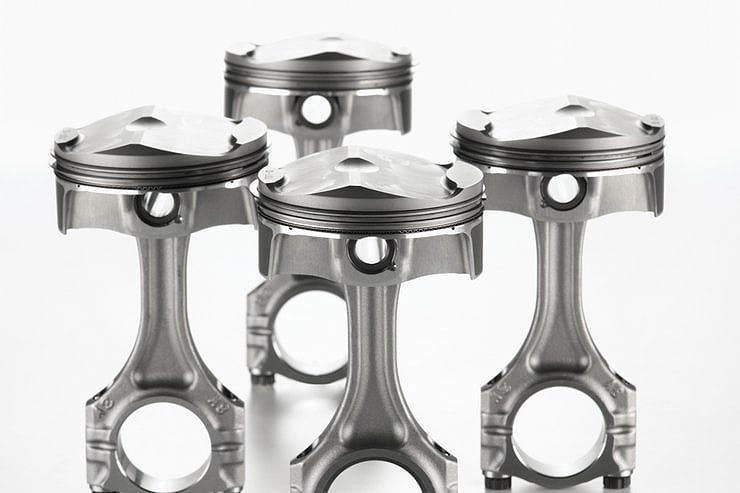 The other big news for the Multistrada V4 engine is the introduction of cylinder deactivation – ‘turning off’ the rear bank of cylinders when they’re not needed.

Although this is a technology that Honda was investigating more than a decade ago, going as far as letting journalists ride Blackbirds fitted with the system, and one that many modern cars use, it’s not widely adopted on two wheels. Ducati is being tentative about it, as the Multistrada V4 only switches to its two-cylinder mode when the bike is stationary, for instance when idling in traffic.

The reasoning isn’t so much about emissions and economy as for rider comfort. Anyone who’s spent much time on the Panigale V4 or Streetfighter V4 will know that Ducati’s V4 can cook your legs in some circumstances, but by turning off the rear two cylinders at standstill, the Multistrada V4 should mitigate that problem, with any resulting fuel saving as a bonus.

For full details and pictures of the Multistrada V4, we’ve got a couple more weeks to wait, with an announcement expected on 4th November 2020. 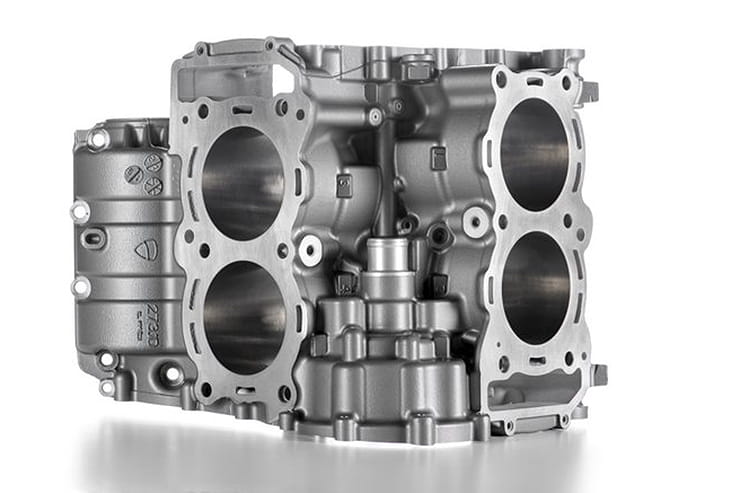