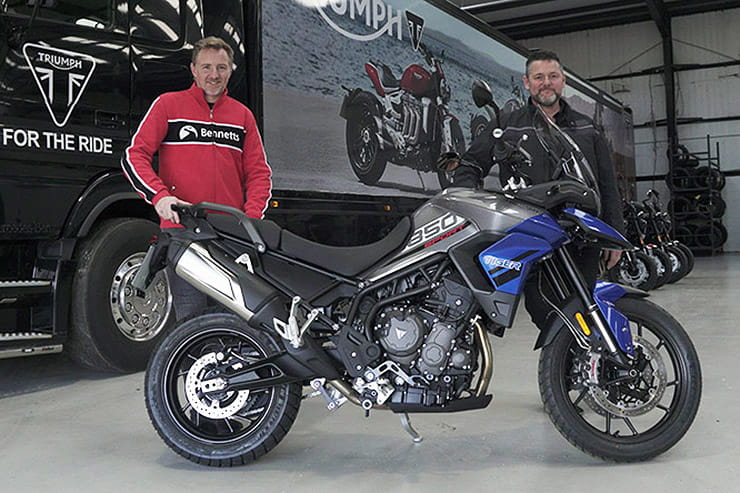 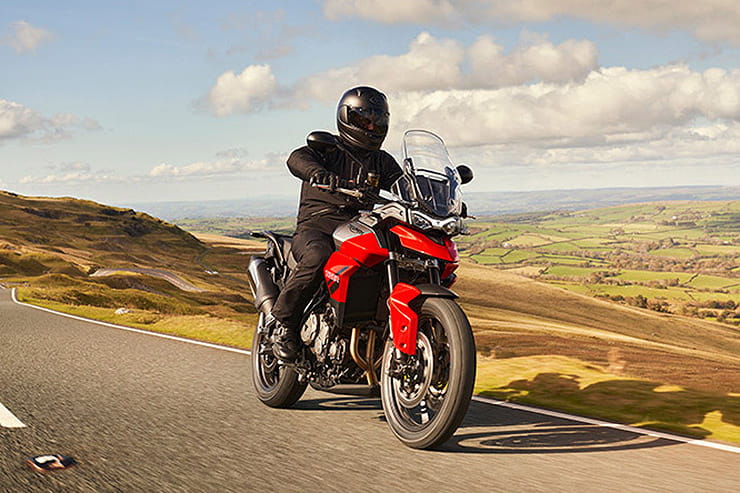 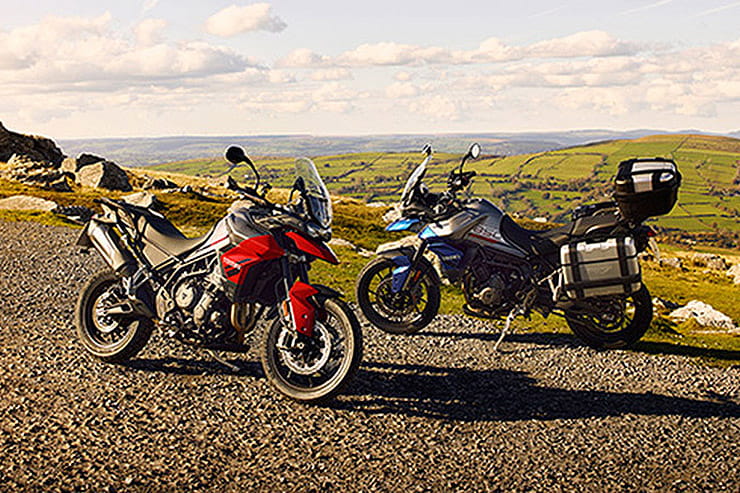 UPDATED (1st April 2021): we've been informed that the original press material for this model stated 10,000-mile service intervals whereas it should have read 6,000-mile. Therefore article did originally have 10,000-miles in the last section but it's now been updated.

Even though the five-part Triumph Tiger 900 range has only been on the shelves for less than a year, we’re already saying goodbye to the standard, base-spec model which is set to be replaced in 2021 by this, the new Triumph Tiger 850 Sport.

Triumph’s new road focused adventure motorcycle uses the same 888cc, inline 3-cylinder engine that can be found nestled in the Tiger 900 range with its quirky T-plane crank and 1-3-2 firing order, although for the 850 Sport it has an electronic tune to decrease the peak power and torque for A2-licence compliance. Triumph is looking at encouraging a younger audience into its ‘Tiger’ range.

This version has been born out of a desire from customers and dealers for a more accessible option than the Tiger 900 range in terms of price, power and torque.

We were invited to Triumph’s HQ in Leicestershire to have a good look around the bike, check this video out, it even includes an engine start!

While the peak power of the Tiger 900 range stood at 94bhp @ 8750rpm, the Tiger 850 Sport with its revised and dedicated engine tune is only a fraction lower at 84bhp @ 8500rpm but that’s peak power remember, and Mile Perkins of Triumph told us the power delivery is more manageable, controllable and progressive, although added, “I would say that it’s not dramatically noticeable until you really get up to the top end.”

In terms of performance targets, Triumph’s engineering team designed an inline triple that also behaves like a twin at low and midrange rpm by cleverly interpreting an alternative firing order, much like Yamaha’s crossplane crank R1, which is where the genius for the Tiger 900’s engine character, which of course transfers straight into the Tiger 850 Sport; on the crank, the crankpins are at 0°, 90° and 180° – in the shape of a sideways T. Yes, Triumph call it a T-plane crank. It means the firing interval is unevenly spaced (0°, 180°, 450°) – and in terms of time signature, the firing order is 1,3,2 giving a unique character and even sound.

Being A2 licence compliant, the model can simply have a kit added incorporating a dedicated twist grip and engine tune which can then be removed by a dealer when a full licence is obtained. Peak torque is so much lower in the rev range on the A2 version because, according to Triumph's Miles Perkins, "once the engine has reached the maximum allowable power of 35k, the torque has to be gradually reduced to maintain that power level as the revs increase. With this we have chosen the approach of giving riders the maximum available torque up to the restriction with a cap behaviour beyond this, rather than alternatively applying a gradual restriction through the rev range with the consequence of reduced performance across a fuller riding range."

Against its rivals, the Triumph is the only triple in its class and until a group test proves otherwise, our guess is this British entrant will demonstrate its strength particularly in the mid-range and any roll-on acceleration competition such is its response and delivery. 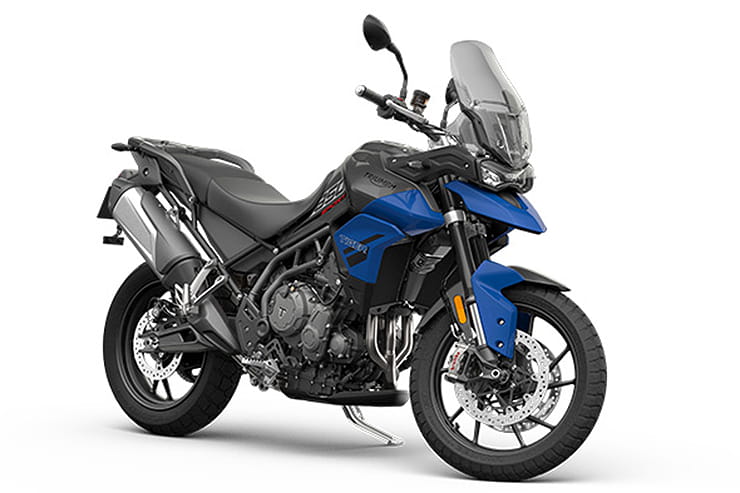 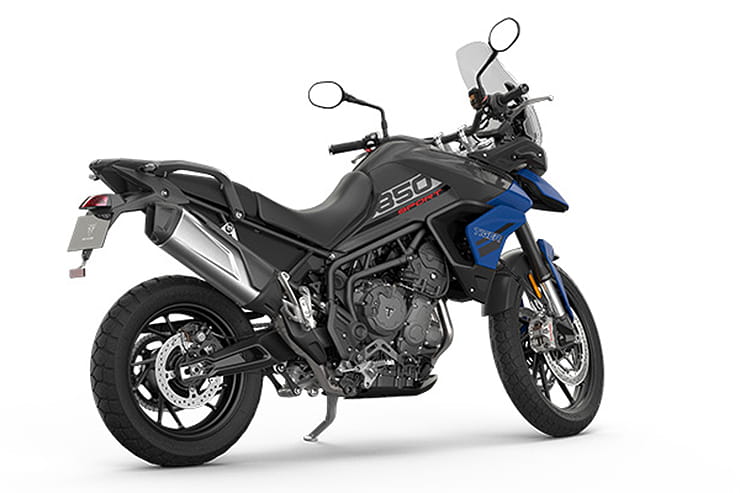 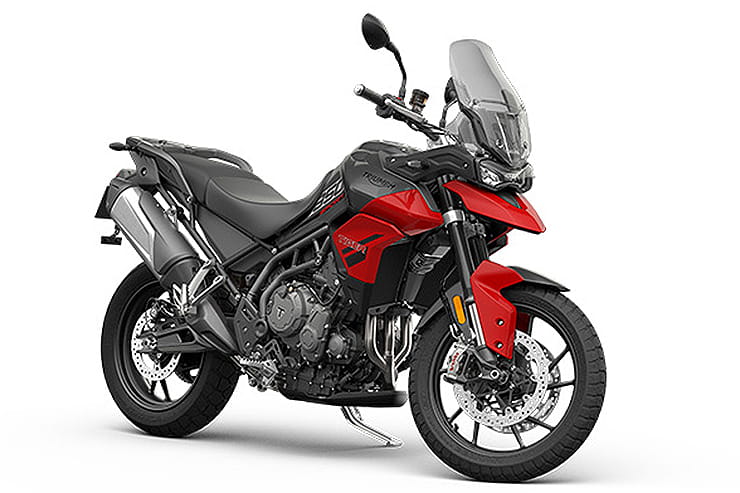 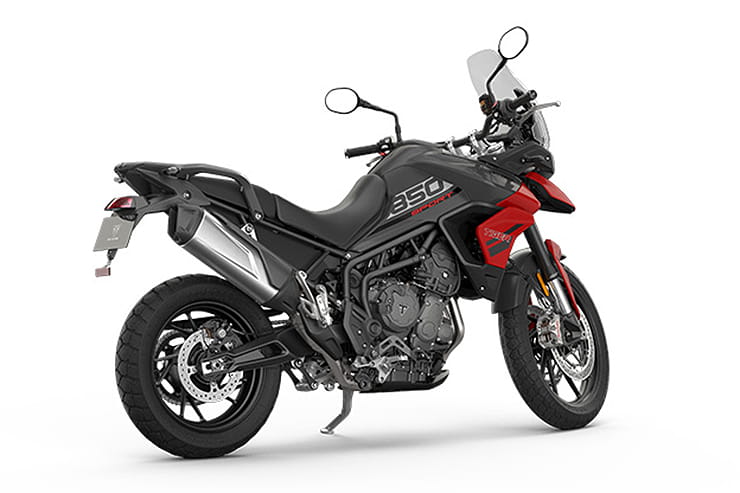 Courtesy of many shared components with/from the Tiger 900, including the new-for-2020 modular frame with bolt-on aluminium sub-frame, the dry weight figure of 192kg matches that the base spec 900, which in turn is 7kg less than the previous Tiger 800 XR. The reason behind the revised chassis is should the bike be dropped and the sub-frame damaged then it can easily be replaced rather than be written off if the entire frame needed replacing.

An adjustable seat height of 810 - 830mm can be accessed and swapped on the underside of the seat with the movement of a simple clip system-style bar, while an accessory low seat offers a 790mm seat height. The narrow waisted seat accentuates the narrow profile of the bike

Top spec Brembo Stylema brakes are a surprising yet pleasant addition given the so-called ‘accessibility’ of the model. Twin floating 320mm discs halting the front wheel are paired with a single 255mm version on the rear.

Marzocchi’s 45mm upside down forks offer 180mm of suspension travel at the front, although are non-adjustable, while a Marzocchi gas pressured rear suspension unit gives 170mm rear wheel travel and is adjustable for pre-load, handy for those carrying a pillion and/or luggage.

Michelin Anakee tyres surround the cast aluminium wheels, 19” on the front and 17” on the rear. They’re designed for a bit of light off-road and offer a more rugged look than anything more road focused. These tyres weren’t available when the Tiger 900, particularly the ‘GT’ model came to market.

A handy piece of weather protection is the high screen which is also adjustable, conveniently by just one hand via the horizontal bar at five 10mm increments. 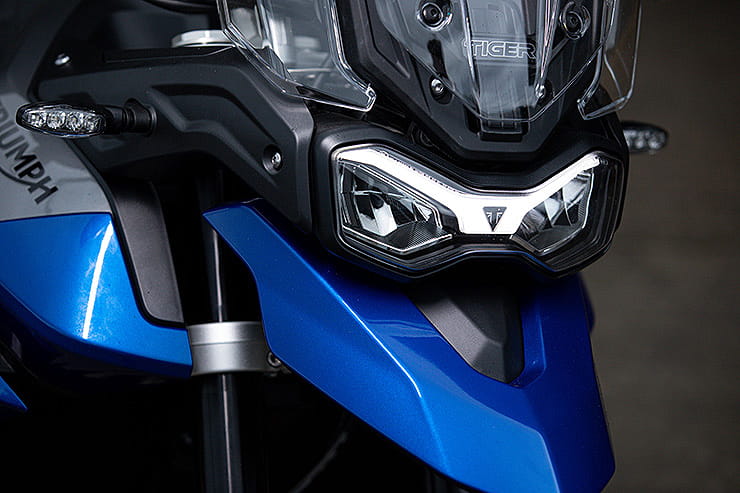 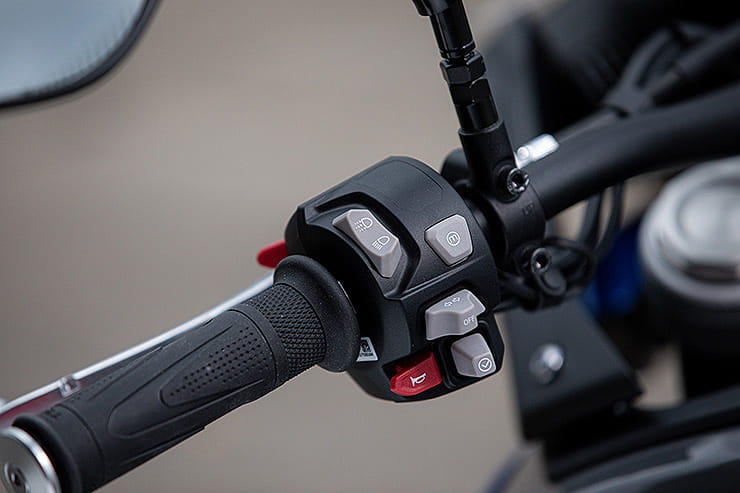 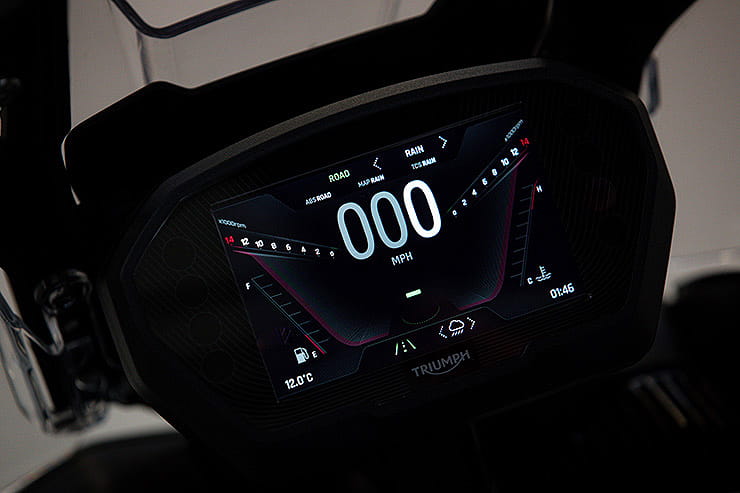 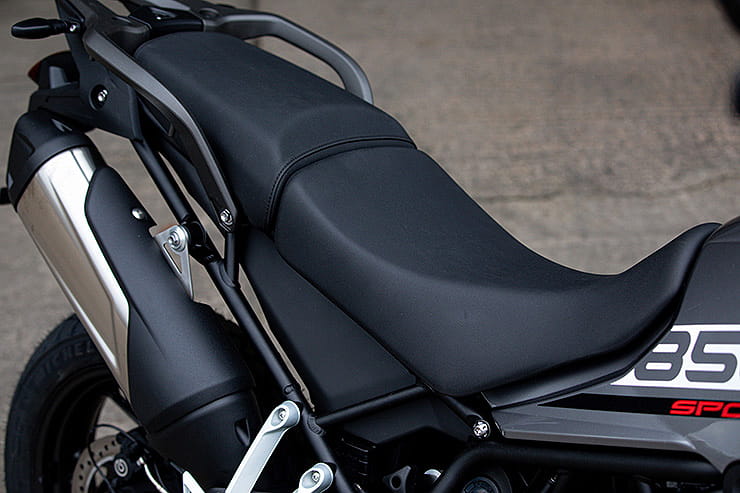 For a motorbike with a Triumph heritage then you can and should expect some clever integrated electronics, especially considering the target audience. Two rider modes - Rain and Road – are adjustable via the ‘M’ button on the left-hand switch gear, and alter the engine tune and traction control intervention settings without making a difference to full power. Incidentally, traction control can be switched off completely, if that’s your thing.

The 5” full TFT display has four designs to choose from, all of which is controlled by the joystick control on the left-hand switchgear.

One key point of difference between the Tiger 900 and Tiger 850 Sport, aside from the tyres, colours and engine tune, is the LED lights. The headlight, tail-light and indicators are LED powered while the headlight features a daytime running light (DRL). There’s a 12V charging socket attached to the top of the steering head too.

It wouldn’t be a Triumph if it didn’t come with plenty of optional extras, and the count is 60 on the Tiger 850 Sport including heated grips, quick shifter, an Arrow sports silencer, centre stand, engine protection bars and plenty of luggage options.

Two colour schemes will be available at the launch of the bike; Graphite with either Diablo Red or Caspian Blue and both have distinctive model-specific graphics on the side of the fuel tank.

The big 20-litre fuel tank should offer a theoretical range in excess of 220-miles, according to the claimed economy figure of 55.4mpg, while the 2-year unlimited mileage warranty comes with 6,000-mile service intervals, just like the Tiger 900. 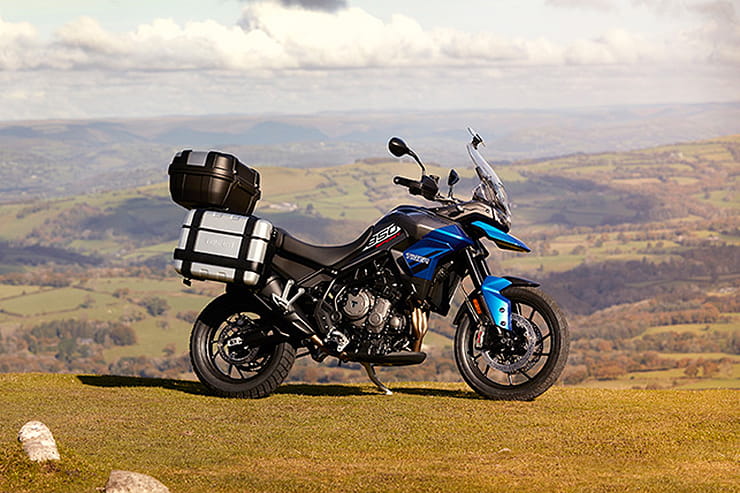 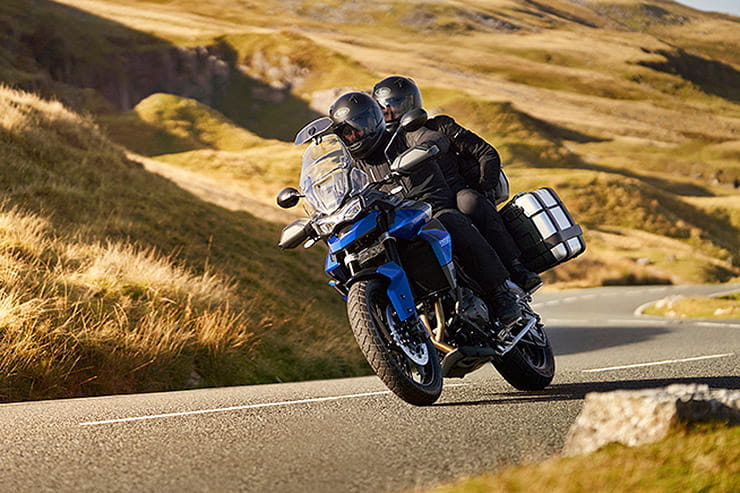 A sure-fire way to win sales is to offer a sub-£10k motorcycling SUV equivalent and Triumph’s Tiger 850 Sport certainly covers plenty of the requirements but what are it’s nearest opponents? Well, the British firm singled out the BMW F750GS but refused to be drawn on any others, so here are our thoughts:

Price, comfort, rider aids and economy are probably more relevant than power and torque but click on the links if you want to see more. 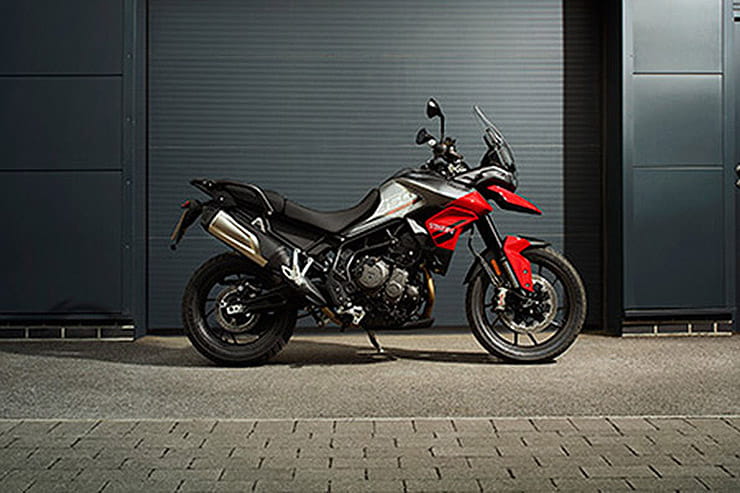 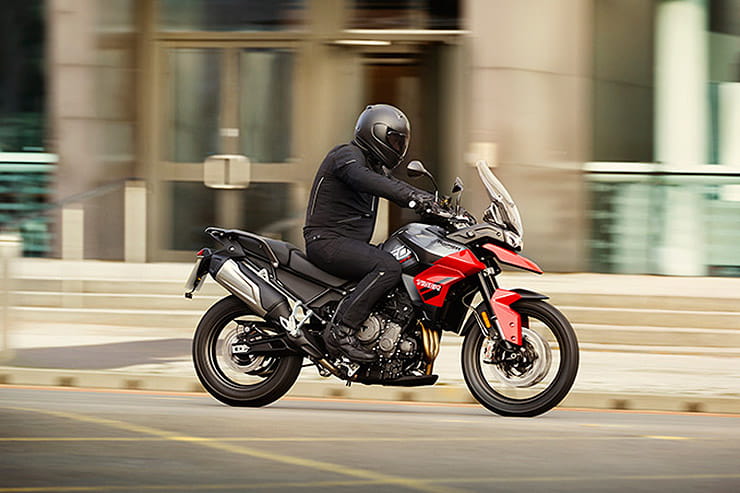 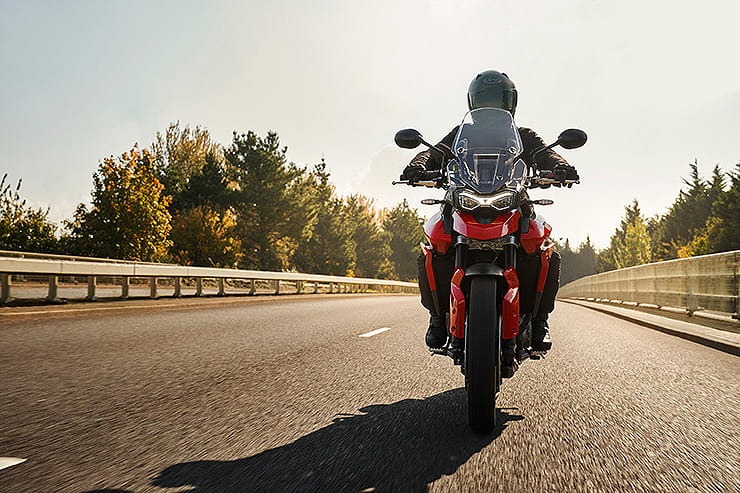