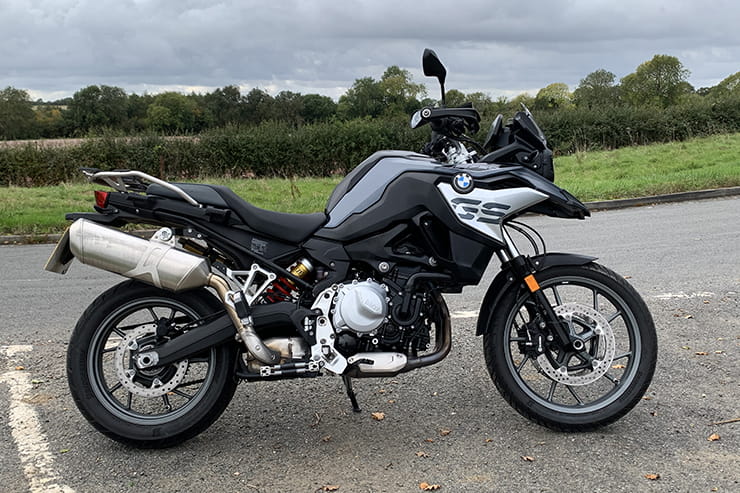 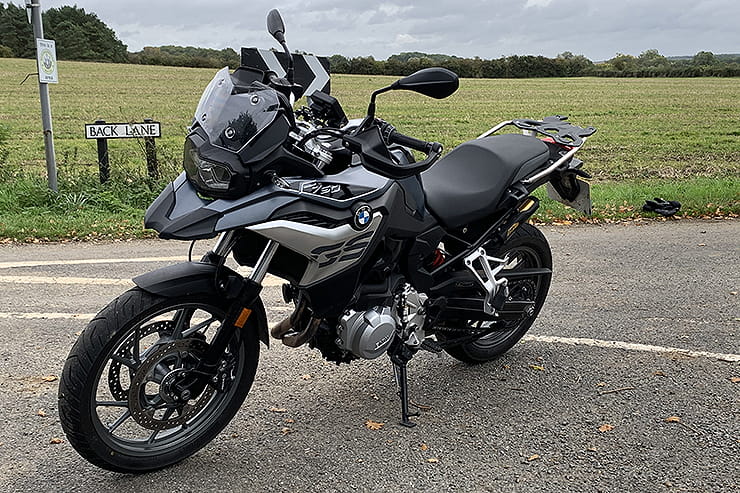 Just supposing that as well as the usual spec stuff like BHP, torque, top speed and acceleration we had some kind of measure of ‘rider’s smile width’ or ‘incoherent shouty babbling-per-minute’? If bikes were judged on measures like those this plain-looking, almost invisible 77bhp BMW twin would be up there with pretty much any other motorcycle I’ve ridden this year. Because once you get past the spec sheet and realise just how good 77bhp can be if you deliver it well, judged on the simple question of ‘how does it make you feel?’, BMW’s F750GS is simply brilliant. It’s easy to dismiss the F750 as an entry-level BMW twin, but I’d prefer to see it as the roadgoing version of the F850GS. Lower seat, less bouncy suspension and a more sporting attitude. Don’t take my word for it, get yourself a test ride and make up your own mind

The bottom line is £8600 for the basic-spec F750GS. That bike has manual preload and damping adjustment on the rear shock absorber, cornering ABS, Dynamic traction control, two riding modes (road and rain) and the TFT display common to all BMWs this year. From 2020 all BMWs above 400cc also come with a tracker fitted as standard too. The first year’s subscription is included, after that the owner can either pay the subscription themselves or leave the tracker dormant.

For £925 more the £9525 F750GS TE adds two more riding modes (Dynamic and Enduro), heated handlebar grips, a quickshifter and LED headlight. There are other option packs available including electronic suspension adjustment, centrestand, cruise control, luggage and sat-nav preparation, making it all too easy to end up with a ‘budget’ bike that just cost you £12k.

If you have the self-control to resist we’d suggest the basic bike plus heated grips or the TE model if you can get a good deal. And, because BMW don’t sell many basic versions, chances are if you ask to buy one the waiting time will be so long that a smart dealer will offer you a good deal on the TE model anyway. 77bhp doesn’t sound like much for an 853cc motor these days, but the seat-of-you-pants performance suggests otherwise

I really wish we could get away from our obsession with power figures because, increasingly, now so many bikes have so much of it, they no longer reflect how fast a bike will feel. There’s no point having 200bhp if it all lives above 9000rpm and your riding style is to change up at 8000rpm.

It’s easy to look at the BMW’s spec-sheet and scoff at the 77bhp peak figure (similar to a Yamaha MT-07 that costs £2000 less). Your loss, because, on the road, especially in the ‘Dynamic’ riding mode, the way this motor uses all of its 60-lb-ft of torque and smart choice of gear ratios to punch out of corners between 6-8000rpm feels stronger than the KTM 1290 I’ve been riding for much of this year, stronger than Triumph’s Street Triple and much, much stronger than Yamaha’s already-amazing MT-07 (which, to be fair has 150cc less and makes almost 20 per cent less torque) or MT-09 for that matter.

Where the F750GS motor loses out is that it doesn’t rev that high and so power drops off around 8500rpm, but by that time you’ve changed up a cog and in the top couple of gears you are already going faster than you need to. The badge says ‘750’ but it’s actually 853cc. Not the same performance as the F850 though, even though the two engines are essentially the same. Confused? Us too

Like the F700GS before it, which used a de-tuned version of the old 800cc motor, this new F750 is actually 853cc. No, we never understood it either, but clearly the Germans do have a sense of humour.

This heavily-revised, parallel-twin engine, launched in 2018 is very different from the old F800 motor. The dummy third-piston that smoothed out the vibes in the old motor has been replaced with dual balancer shafts and the exhaust has been moved from the left to the right hand side (because, when lifting up and pushing a stricken GS off-road, riders complained that they usually stood on the left and the hot exhaust could burn their clothing).

From a rider perspective it’s the advances in fuelling technology and ignition that are most obvious. The different riding modes (especially ‘dynamic’) really perk up the power delivery, making the throttle response noticeably sharper and delivering the bike’s 77bhp in a manner that makes it feel like much more.

BMW twins of the last ten years, whether in a parallel or boxer layout have a distinct personality. They pick up revs very quickly, like the pistons were made of race-grade Titanium and there’s a lovely, buzz-saw, aggressive rasp that you feel through the throttle.

The other thing this motor does really well though is the more laid-back stuff. Where big twins can be a bit chuggy through town or cruising at motorway speeds, the middleweights tend to be smoother and a bit perkier too at low speeds nipping in and out of traffic. Again, it’s BMW’s superb fuelling and throttle response that makes the difference here.

The gearchange is very slick with a light clutch and accurate shifting. Neutral can be a bit stiff to select on occasion, but you soon get used to it. Our test bike had BMW’s Gearshift-pro quickshifter fitted. It’s far from the best system out there – stiff, clunky and doesn’t always engage at lower of mid-rpm - and, to be honest, the F750’s gearshift is so good anyway, you’d be better off spending your cash on something else.

Sadly, the price you pay for an engine that punches so far above its weight is that fuel consumption in loopy mode reminds you that shifting a certain amount of weight at a certain velocity requires a certain amount of energy. Having said that, 52mpg on the back roads isn’t too bad considering the way it was being ridden.

In more typical use the F750’s figures are pretty much the same as the F850GS. Over the full test period it averaged 57mpg with a best of 65mpg on a motorway run. 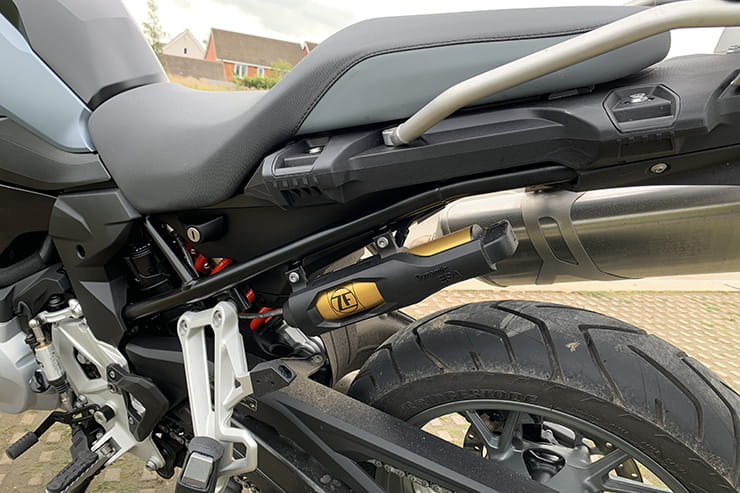 This bike has the optional ESA electronic suspension adjustment. It works superbly but adds £710 to the price

The chassis is the same as the F850GS with a seat height of just 815mm (the F850 is 860mm) and standard suspension is simple, but effective with minimal adjustment. Front forks are very different from the long-travel upside-down items on the F850GS, but all the better for it on the road.

At 224kg, it’s a whopping 40kg heavier than Yamaha’s MT-07 and only 5kg lighter than the F850GS. But it feels more compact and easier to throw around than the F850 and as nimble in the corners as an MT-07. That’s impressive. Steering geometry is relatively lazy as is the wheelbase so it seems odd-but-reassuring to see a steering damper fitted above the bottom yoke.

Our test bike had the optional ESA electronically-adjusted suspension pack which has two modes; Road and Dynamic. Road has softer spring rates and damping settings for comfort, but also controls the suspension surprisingly well on twisty back roads. Dynamic is the sportier setting, but I found it a bit too harsh on the bumpier back roads. You can set the suspension settings independently of the riding modes and I found road suspension with dynamic engine mode to be the best overall setting. The Brembo twin-piston calipers are the same as fitted to the F850GS, but they seem to work better on the F750 with more immediate bite. Maybe it’s because on the bigger GS the extra fork travel soaks up some valuable microseconds of stopping or maybe BMW has fitted different pads. Whatever the reason, the F750GS brakes with more confidence and precision than the bigger bike.

I found the seat more comfortable over distance than the F850GS, although, to be fair I did more long journeys on the bigger bike. The F750 seat doesn’t feel as sumptuous as the bigger bike, but neither does it feel as soft. The riding position of the 750 is slightly more road biased and the lower screen is much less noisy too. Motorway cruising was easy; legs aren’t cramped, there’s enough weight on the bars to relieve your back and no noticeable vibes through the bars or footpegs either. 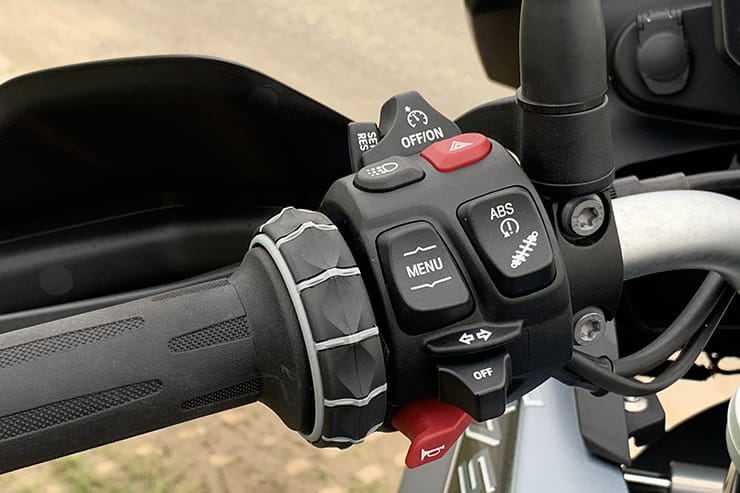 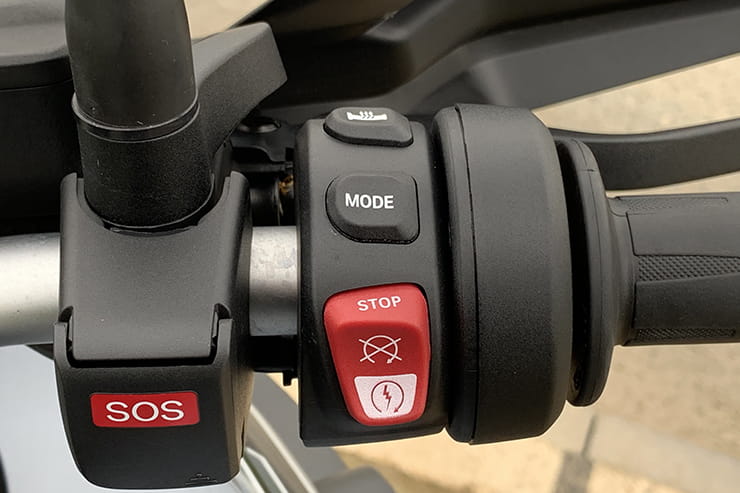 TFT display is easy to use, comprehensive and supports BMW’s free navigation app. Complex switchgear on our bike is because of all the options fitted

The standard bike now has BMW’s lean-sensitive ABS-pro, dynamic traction control and a couple of riding modes. Road mode is lovely, rain mode is not. I still don’t understand why manufacturers think the safest thing to do in the wet is introduce a lag between opening the throttle and delivering power. I sort-of understand the theory, but the reality is that when nothing happens, you open the throttle some more. BMW’s fuelling and throttle response is so good and so predictable that you’d have to be in a coma to lose it on the throttle in the wet and, riders with comas have much more to worry about than being in the right mode.

The extra riding modes on our test bike were worth having…probably. I can’t speak for Enduro mode because I didn’t take the bike off-road, but you can definitely feel the sharper throttle response in Dynamic mode. ABS-Pro adds lean-angle sensitivity to the system, which adds extra re-assurance and makes the standard bike much better value than last year, when you had to buy the more expensive ‘Sport’ model to get it.

I’m undecided about electronic suspension adjustment too. If you swap regularly between solo and two-up riding it’s worth it. If not, I’d buy the standard set-up and get it how I want it and then leave it alone.

BMW’s TFT display is superb. Lots of information, easy to read and it supports BMW’s free navigation app. The SOS E-call function failed a couple of times, leading to a scary warning message across the display. On both occasions it reset itself after a few minutes. I’m assuming a loss of signal to the sim card caused it. Is that a weakness if your SOS function relies on having a mobile signal?

Styling is mostly good, but some things like the exhaust collector are a bit clumsy

If you can stand the derision of your BHP-crazy biking mates and simply want a brilliant, good-time motorcycle that can also do the practical, grown-up stuff too, then get yourself a test ride on an F750GS. You won’t be disappointed. It’s well-priced…for a BMW and the riding experience is significantly stronger than Suzuki’s DL650 V-Strom or Yamaha’s MT-07/MT-09. But all those bikes cost considerably less and no one leaves a BMW showroom without spending at least £1000 on accessories, making the F750GS expensive for a bike that everyone else sees as ‘a nice first big bike’.

Ignore them, they’re idiots. If you like it and can afford it, then buy one. 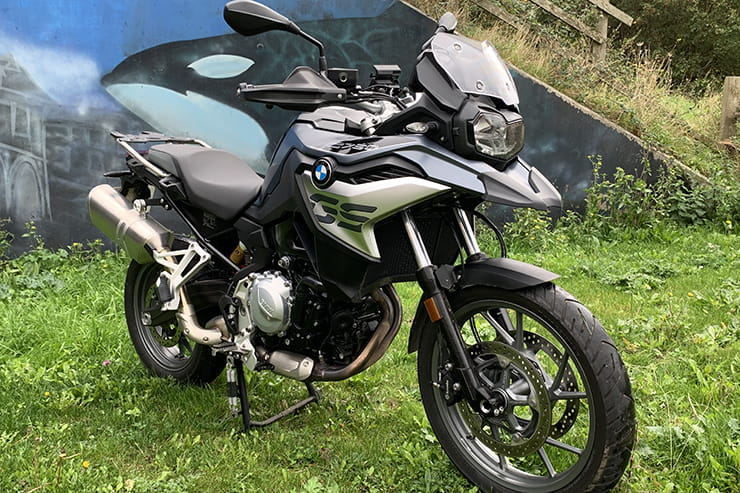