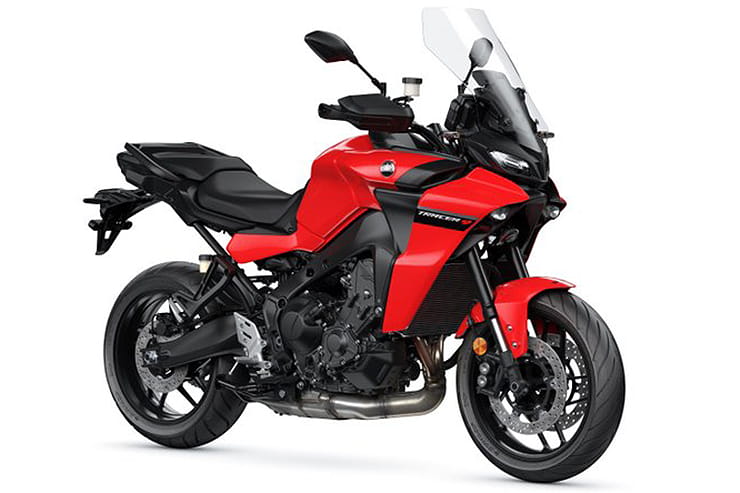 The launch of 2021’s all-new Yamaha MT-09 meant its faired sister model would inevitably get similar changes – and the resulting Tracer 9 and Tracer 9 GT models look like a recipe for success in the all-rounder market.

As well as mirroring the MT-09’s headline changes, including a larger, more powerful version of the three-cylinder engine and a new Deltabox chassis, the two Tracer versions get a new look and even new names to reflect the scale of the update. Originally dubbed ‘MT-09 Tracer’ the faired model became ‘Tracer 900’ in 2018, and now it’s simply ‘Tracer 9’, despite the fact that the engine is now closer than ever to that ‘900’ mark that the previous model proclaimed. 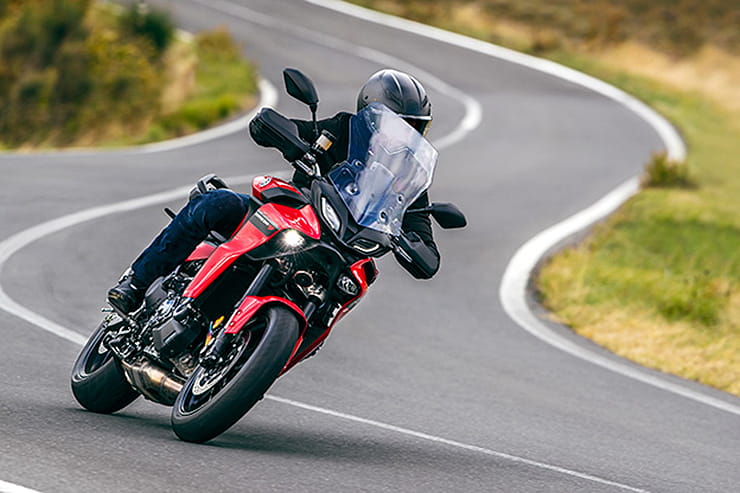 All that is bolted to a cast aluminium Deltabox beam frame instead of the old model’s ‘diamond’ design, promising lower weight and improved rigidity compared to its predecessor, while new ‘SpinForged’ wheels are 700g lighter than their cast alloy forebears to further improve the bike’s performance, ride and handling. Overall weight drops by 2kg to 212kg wet.

However, the Tracer 9 isn’t simply a case of bolting fairing panels to the 2021 MT-09, as Yamaha has made several significant changes to the chassis to suit the bike’s new role. Most notably, there’s a lengthened version of the MT-09’s newly-designed swingarm, 60mm longer than on the naked bike to push the Tracer 9’s wheelbase up to 1500mm. The engine mounts are also specific to the Tracer; they’re thicker than those on the MT-09, and since the engine is a structural part of the chassis, that means the frame’s flex characteristics will change as a result. Yamaha says the tweaks improve stability and make sure the Tracer still works well when loaded with a passenger and hard luggage. 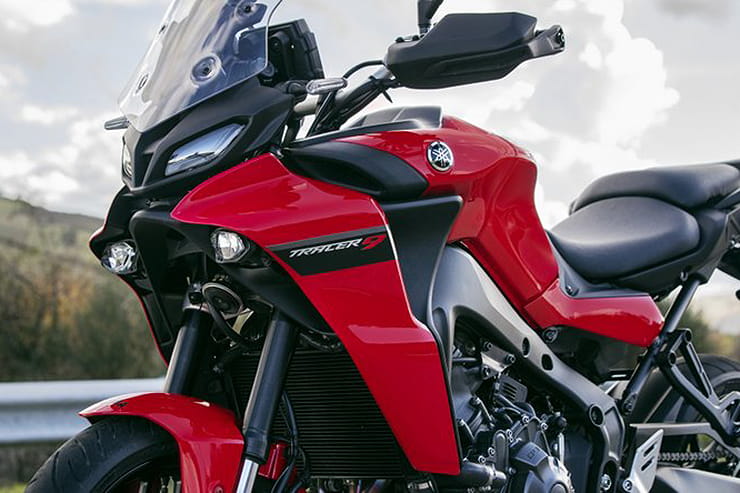 Speaking of luggage, the three-case system is an option on the Tracer 9 and comes as standard on the more touring-oriented Tracer 9 GT. Both bikes get the same ‘floating stay’ luggage system for the panniers, which improves high-speed stability by ensuring movement of the luggage doesn’t influence the whole bike. Compared to the previous Tracer 900, the bike’s carrying capacity rises by 7% to 193kg for the passenger and luggage combined.

To confirm its sports-touring position, the Tracer 9 also gets cruise control as standard – something that was previously only on the GT model. It can operate from 30mph upwards provided you’re in 4th gear or higher, with speed adjustment in 2km/h increments using a switch on the left hand bar. As usual, the clutch and brake instantly deactivate the cruise system to return control to the rider, and rolling the throttle forwards past its ‘closed’ position also overrides it.

From a touring perspective, the new engine’s claimed 9% improvement in fuel economy means the Tracer’s range rises to more than 217 miles, despite the 18l tank size being unchanged compared to the previous model. 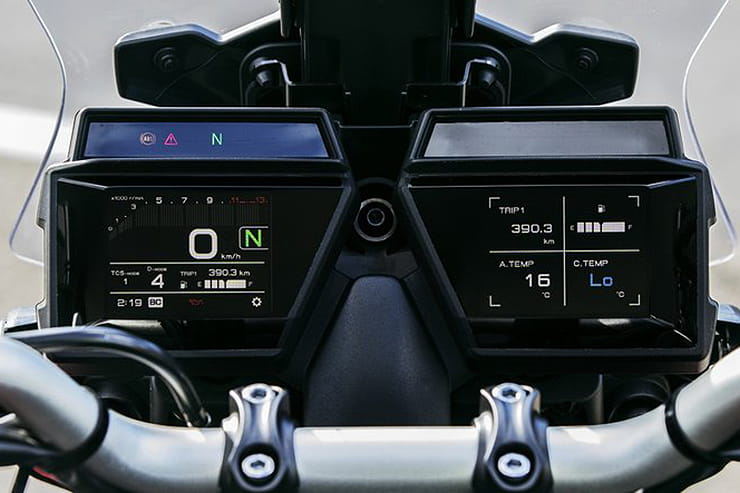 Sticking to the touring theme, both versions of the Tracer 9 get an adjustable screen with 10 height settings over a 50mm range, and feature a range of adjustments to tweak the ergonomics. The seat – 40mm lower than the old version – has two height positions (810mm and 825mm), while the footpegs can also be adjusted 15mm up or down. The bar clamps can be reversed to move the bars forwards by 9mm and up by 4mm, too. In total, that means there are eight possible combinations of seat, bar and peg positions.

On board, the Tracer gets an unusual new instrument pack with not one but two colour TFT screens. The left hand one deals with revs, speed, fuel level, gear position and traction control settings, while the right display is split into four parts, each able to display a selection of readouts from the trip computer. 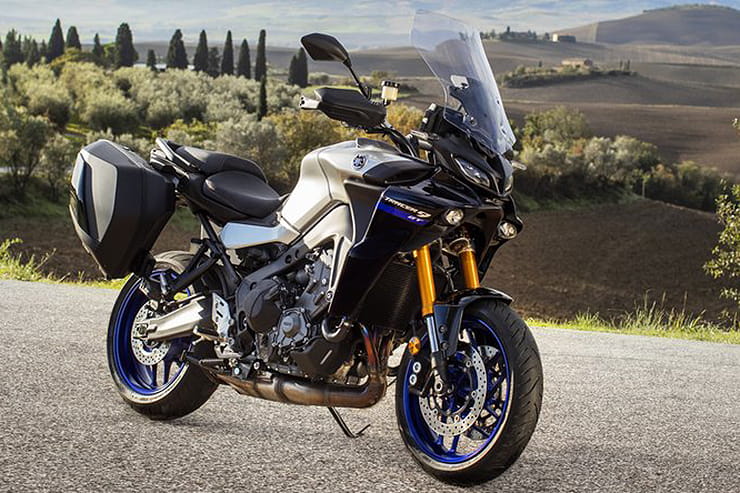 Other standard kit includes full LED lighting, set in a completely new body that has distinct overtones of advent bike in its front-biased proportions.

While luggage is an option on the Tracer 9, side cases are standard with the Tracer 9 GT, which Yamaha positions as a more upmarket, touring-oriented version of the bike. As well as the luggage, it gets KYB electronically-controlled suspension as standard, replacing the stock bike’s 41mm KYB forks and shock with versions that automatically adjust damping settings in response to inputs from the bike’s IMU. The semi-active suspension adds yet another layer of choice for the rider, who can pick between two modes – A-1 is a harder setup for sportier riding, A-2 is softer for touring use and rougher roads.

On top of that, the GT gains an up-and-down quick-shifter– surprisingly it’s not stock on the base Tracer, even though it’s standard on the 2021 MT-09 – plus cornering lights with an extra LED on each side, switching on to illuminate the apex of corners when the IMU registers more than 7 degrees of lean angle. Heated grips are also standard, and while you can spec the Tracer 9 GT in the normal Tracer 9 colours – red or grey/green ‘Tech Kamo’ – it’s also offered in a GT-only silver, black and blue ‘Yamaha Icon Performance’ scheme.

Both the Tracer 9 and Tracer 9 GT will reach dealers in March next year. 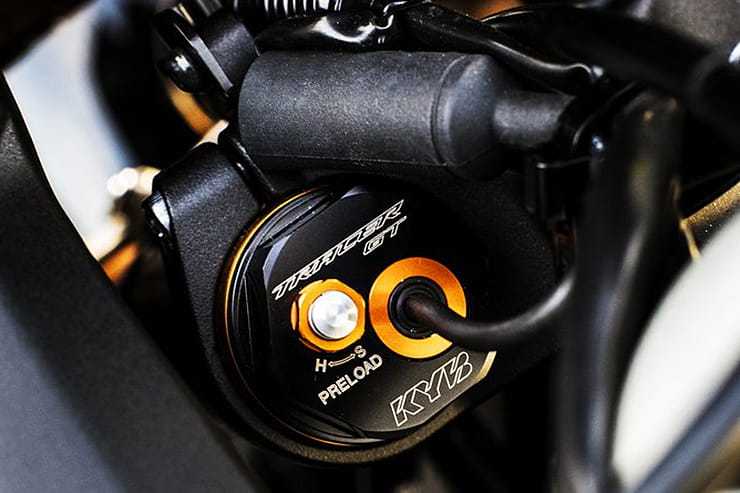