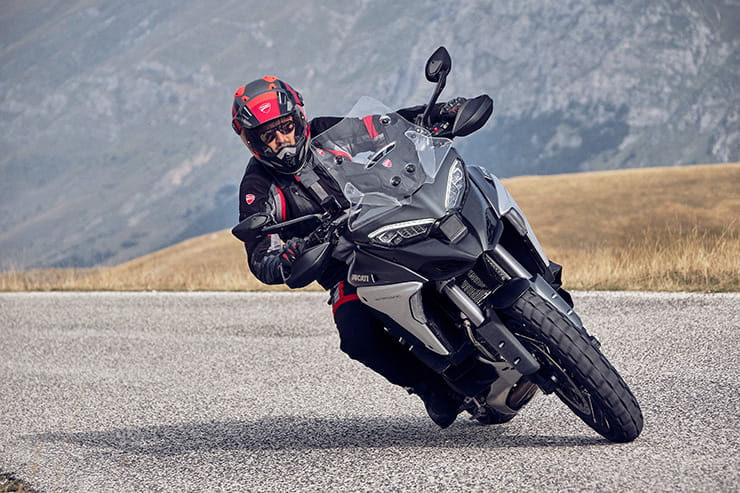 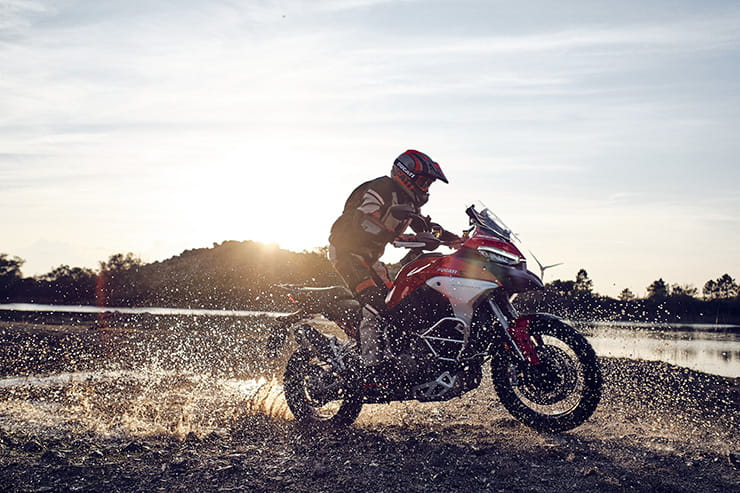 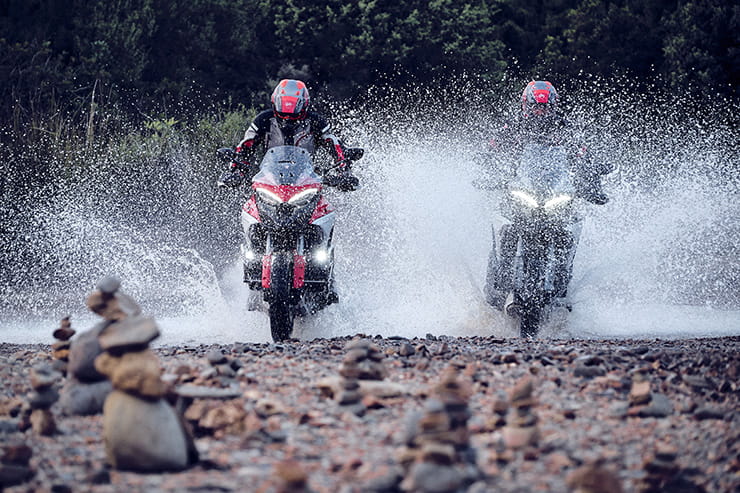 Ducati hasn’t made much secret of the existence of the Multistrada V4 – officially confirming it was coming more than a year ago. Now it’s finally here and hopes to stamp its authority on the adventure bike class with a combination of performance, capability and technology that no current rival can match.

Last month the firm revealed details of the new 1158cc ‘V4 Granturismo’ engine powering the Multistrada V4, so we won’t go into too much depth about the 170hp unit. You can read all about it here. In short, though, it marks a break with Ducati tradition by ditching Desmo valve gear in favour of a normal sprung valve system, extending its major service intervals in the process, while other headline technologies include a counter-rotating crankshaft and cylinder deactivation to reduce heat-soak when the bike’s stationary. It’s also lighter and more compact than the 1262cc V-twin in the Multistrada 1260.

What’s really news today is the bike that’s wrapped around that engine. Or perhaps we should say ‘bikes’, as Ducati has announced three versions along with a host of option packs to transform them into multiple forms. 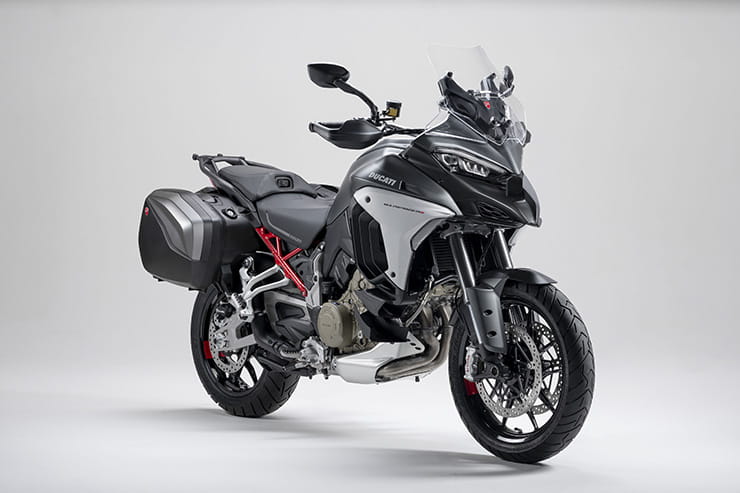 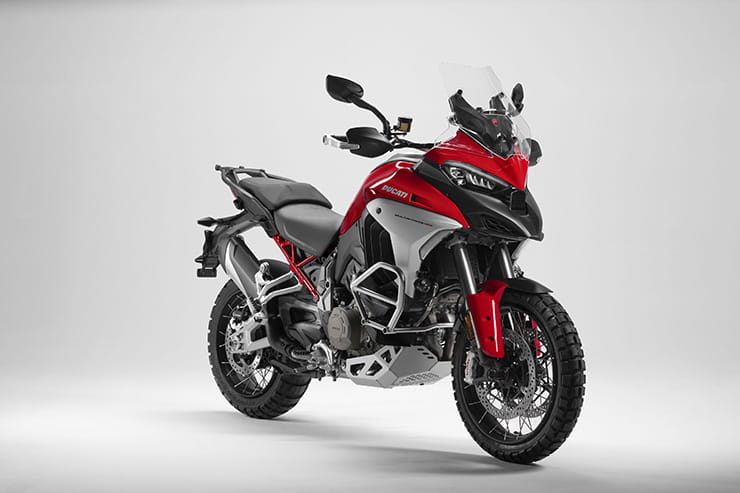 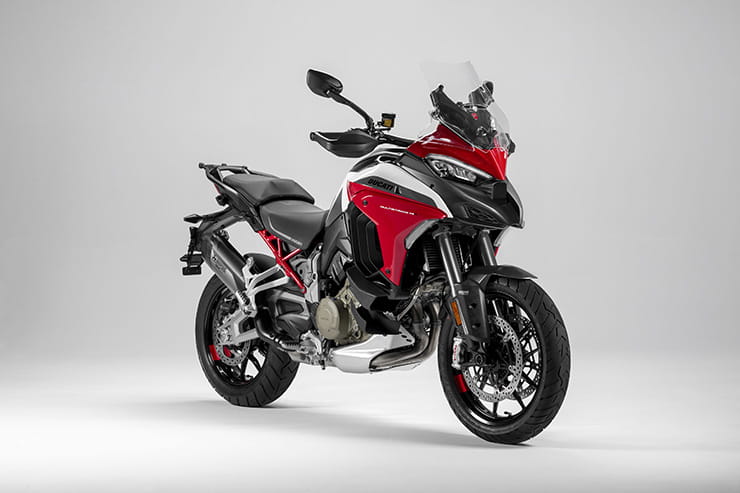 As is customary with virtually any new Ducati, the Multistrada V4 is offered as a base model or a higher-spec ‘S’ version, but this time around the firm has added a further tier with the range-topping Multistrada S Sport.

All share the same basic building blocks including an aluminium monocoque frame sitting atop that new V4 engine, with a trellis-style subframe at the back to give a bit of a visual link to the firm’s traditional designs. A 19in front wheel and 17in rear is also common across all versions, fitted with Pirelli Scorpion Trail II rubber, 120/70-19 at the front and 170/60-17 at the back. The suspension offers long travel – 170mm at the front and 180mm at the rear – while the compact engine allows the ground clearance to rise to 220mm, 46mm higher than the Multistrada 1260.

Atop all that sits a narrow seat to help you reach the ground, adjustable between 840mm and 860mm, with options for a lower 810mm or talker 875mm seat also available.

When it comes to changes between the versions, the base Multistrada V4 comes with Marzocchi suspension front and rear, with 50mm forks, along with Brembo M4.32 radial calipers. On board you get a 5in colour TFT screen, with Ducati’s multimedia system.

Step up to the ‘S’ version and the suspension switches to an electronic semi-active ‘Skyhook’ system, also by Marzocchi, and there’s the option to switch the alloy wheels for a wire spoked design. Brakes are upgraded to Brembo Stylema calipers, and cornering lamps are added to the normal LED setup. The S also gets hands-free ignition and a larger, 6.5in TFT dashboard that enables smartphone-based navigation via the Ducati Connect app, plus a new backlit, bar-mounted joystick control system to operate the screen’s menus. An up-and-down quickshifter is also included with the ‘S’, along with cruise control and hill hold control.

Dig deeper to get the range-topping S Sport model and you get all the S’s kit but also a special paint scheme, a carbon-fibre front mudguard and a carbon and titanium Akrapovic road-legal silencer. 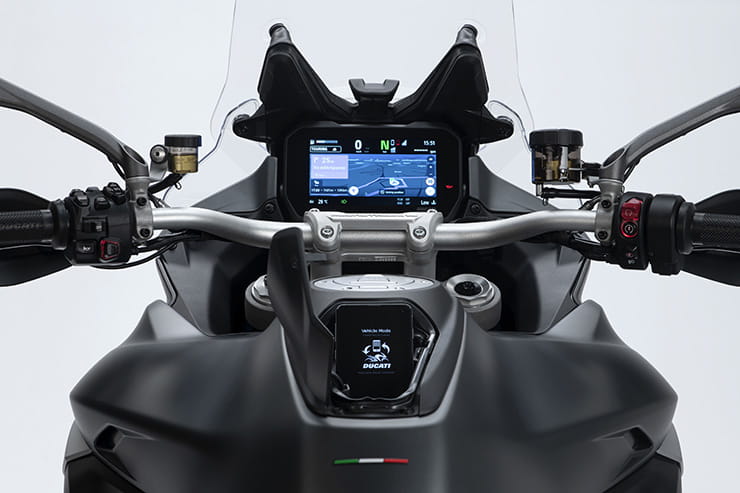 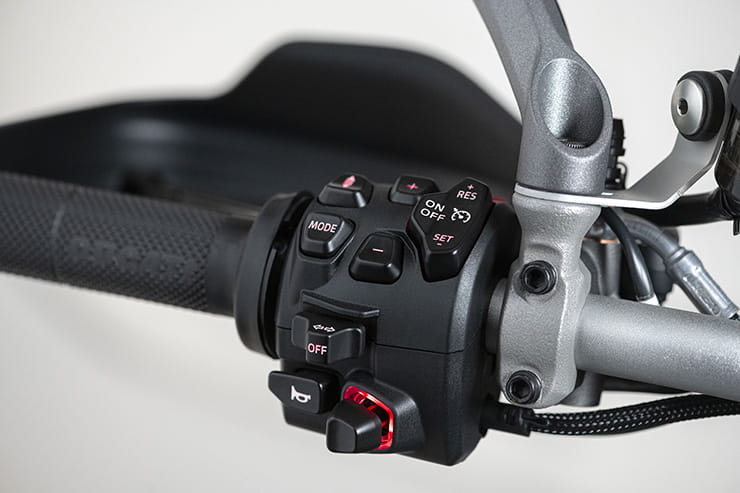 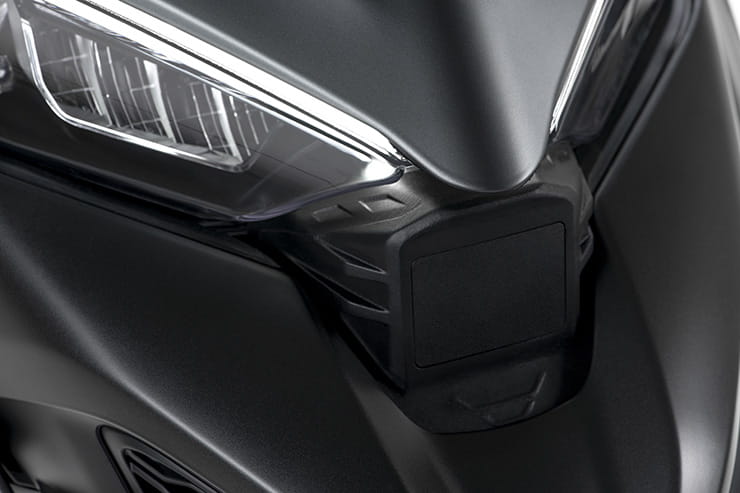 Electronic gadgetry has long been a Ducati hallmark, and there’s no change here. All versions of the Multistrada V4 get an IMU-assisted cornering ABS system, wheelie control and cornering traction control, along with the usual array of rider-adaptable settings. Other standard kit includes a smartphone storage compartment in the top of the tank with a built-in USB charger. Dig into the options list and you can add even more kit, including tyre pressure monitors and the much-vaunted new radar-assisted adaptive cruise control system.

With radars on both the front and rear of the bike, the ACC system – developed with Bosch – is slightly more high-tech than the front-only radar setup being offered on the 2021 BMW R1250RT. Like the BMW’s (also a Bosch system, with many of the same components), the ACC can operate from 18mph to 99mph, keeping a constant distance to the vehicle ahead while trying to maintain the pre-selected speed when it’s turned on. Unlike many cruise control systems, it doesn’t even interrupt when you change gear as long as you’re using the Multistrada V4’s up-down quick-shifter.

Where the Multistrada’s system really differs from the BMW setup is the additional rear radar, which offers blind spot detection – illuminating warning lights in the appropriate mirror when a vehicle gets into your blind spot when you’re indicating to change lane. 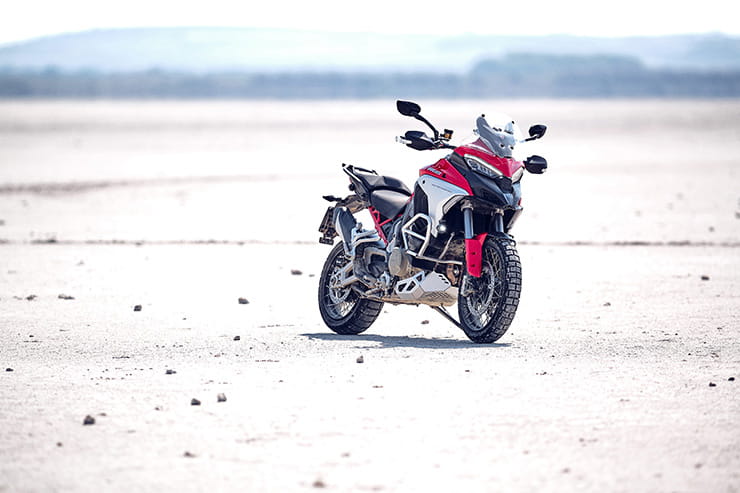 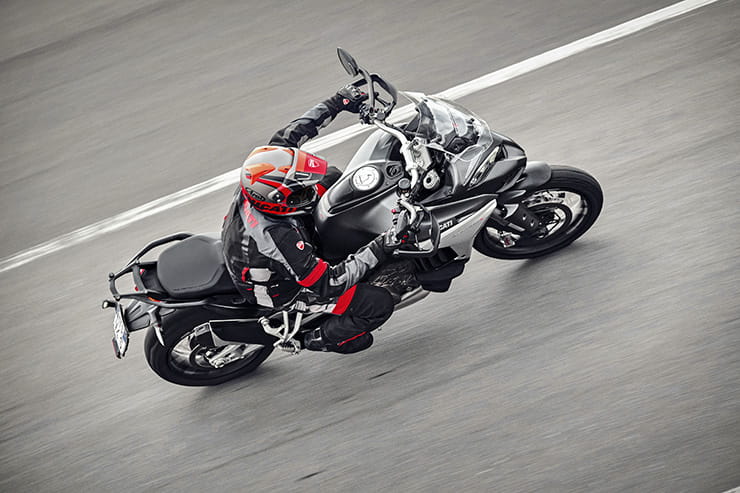 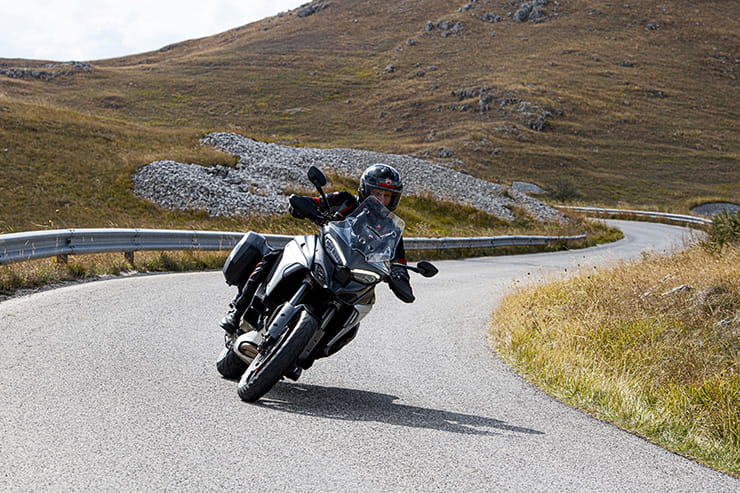 The radar might be the headline piece of kit in the options list, but there’s plenty more on there. The base Multistrada V4 can be had with five accessory packs:

‘Touring’ gives you a centre stand and heated grips.

‘Performance’ bolts on an Akrapovic silencer and carbon front mudguard.

Move up to the Multistrada S, and it becomes more complex. As well as the accessory packs of the base version, there are five separate trim levels. ‘Essential’ is the base version. ‘Travel’ adds side bags, a centre stand and heated grips and seat. ‘Travel and Radar’ adds the radar to the travel trim. ‘Performance’ includes the Akrapovic silencer and carbon mudguard, and ‘Full’ includes everything from the other trim levels.

For the top of the range Multistrada V4 S Sport, the options are more limited. You can have the ‘Full’ trim level, as on the S, and chose from the ‘Touring’, ‘Enduro’ and ‘Urban’ accessory packs. 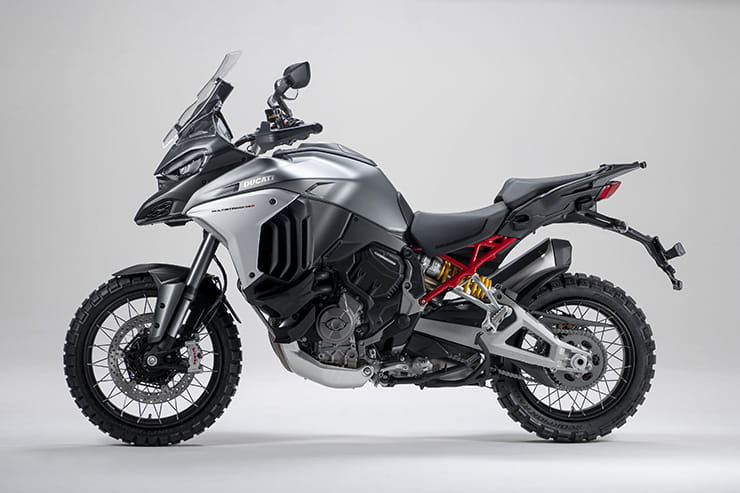 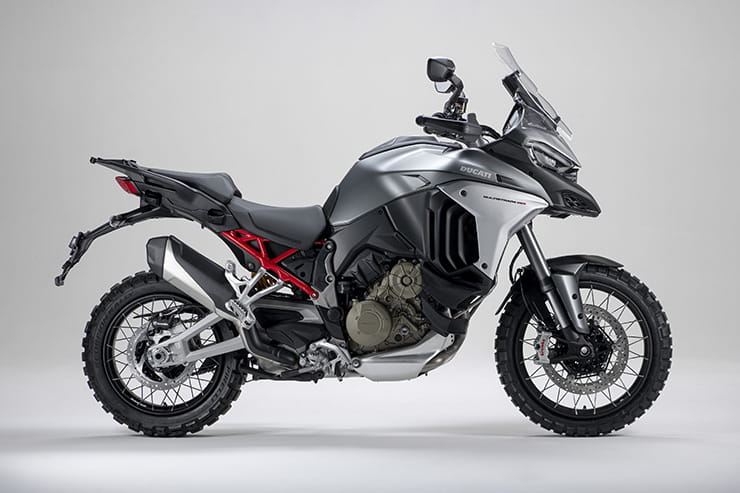 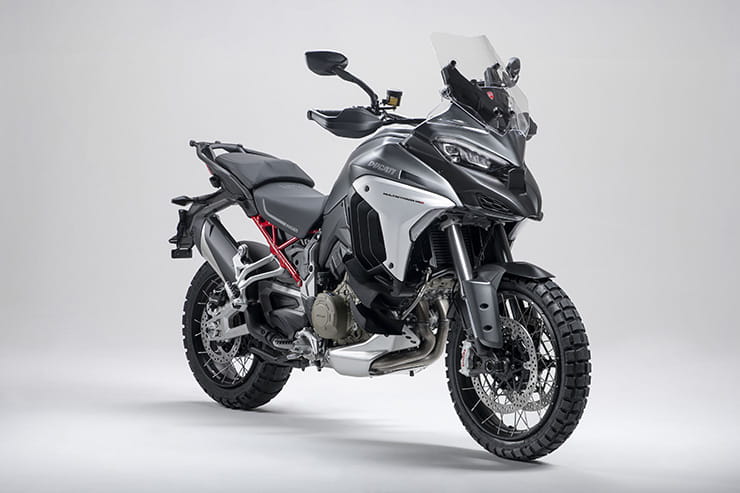 Unsurprisingly, the Multistrada V4’s weight depends on which version you opt for, and will change further as you add more extras from the options list. In their most stripped down form, the base Multistrada V4 is the lightest version, with Ducati keen to focus on the 215kg ‘dry’ weight. Since most manufacturers now quote a kerb weight including all fluids and a 90% full fuel tank, the more realistic comparative figure for the Multistrada V4 is actually 240kg. The higher-spec S model is 218kg dry or 243kg wet, while the carbon fender on the S Sport version brings that down a fraction to 217kg dry, 242kg wet.

Ducati has already started manufacturing the Multistrada V4, so sales are expected to start soon.

Pricing has also now been announced, with the 'base' model V4 starting at £15,495 and rising to £19,145 for the V4S model in black with wire wheels. The top spec V4S Sport model will be £19,995. In terms of cost of ownership, it's also worth noting to enormous 60,000km valve adjustment service intervals - that's more than a lap of the world.

Add-on packs will add significantly to these prices though, with the 'Full' configuration adding a hefty £3100. If that's a bit steep then the 'Travel and Radar' pack is available for £1950, the 'Travel pack' for £1250 and the 'Performance' pack for just £1150.