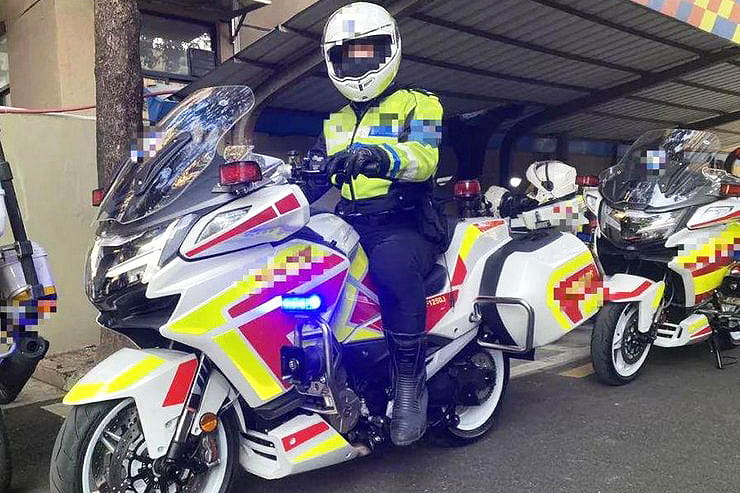 The bike is fruit of CFMoto’s close relationship with KTM. CFMoto already runs KTM’s operations in China, manufacturing the 200 Duke and 390 Duke, and later this year it’s due to open a new factory, capable of building 50,000 bikes per year, that will be used to manufacture KTM’s 790 Adventure and Duke models to be sold worldwide. The same plant is also due to be the home to CFMoto-branded designed around a purpose-made spin-off from KTM’s LC8 V-twin engine, led by the CF1250 tourer you see here.

The engine is derived from the KTM LC8 motor, but it’s barely recognisable having been completely reworked with new castings and different internal dimensions. The capacity now sits at 1279cc, a little shy of the largest KTM-branded version – the 1301cc motor of the ‘1290’ Super Duke and Adventure models – but still bigger than any other motorcycle engine to emerge from a Chinese factory. 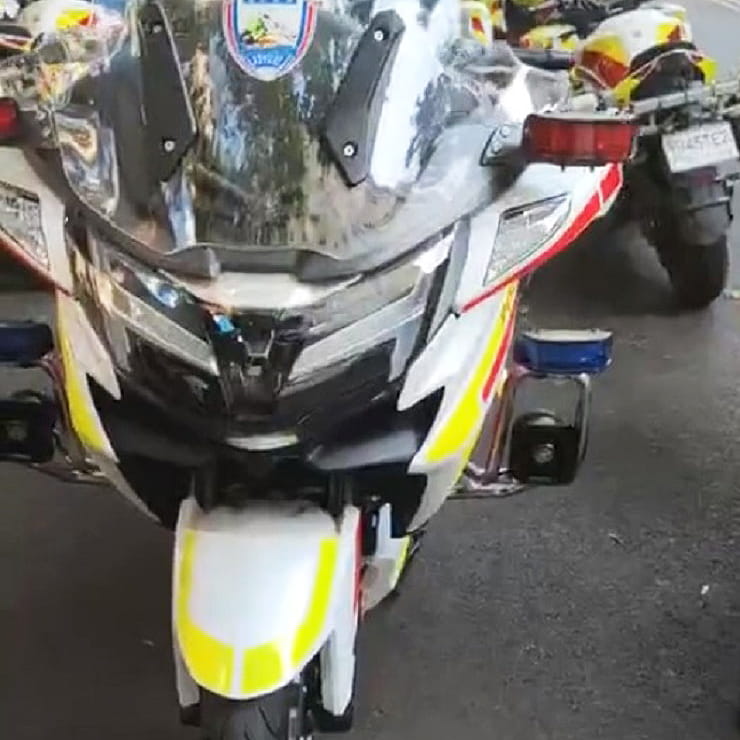 CFMoto has yet to make any official public announcement of the CF1250, but the ‘CF1250J’ police-spec model is now in the hands of Chinese cops. A customer version of the bike, understood to go under the ‘CF1250G’ codename, is also on the way, with a pillion seat and different tail bodywork, but otherwise basically the same as the police version.

Official type-approval documents from China show that the bike makes 105kW of power – that’s a fraction over 140bhp – which is far from an embarrassment when compared to western-made rivals. BMW’s R1250RT, with a similar-sized 1254cc liquid-cooled twin, achieves 134hp.

At 297kg ready-to-ride, the CFMoto is a little heavier than the R1250RT, which comes in at 279kg in the same form, but bear in mind these figures are for the police-kitted version which could be heftier than the eventual civilian model. The type approval info also reveals that the bike uses a 190/55 ZR17 rear tyre and 120/70 ZR17 front and features a Bosch-made ABS system acting on Brembo calipers. Top speed is 240km/h – that’s 149mph. 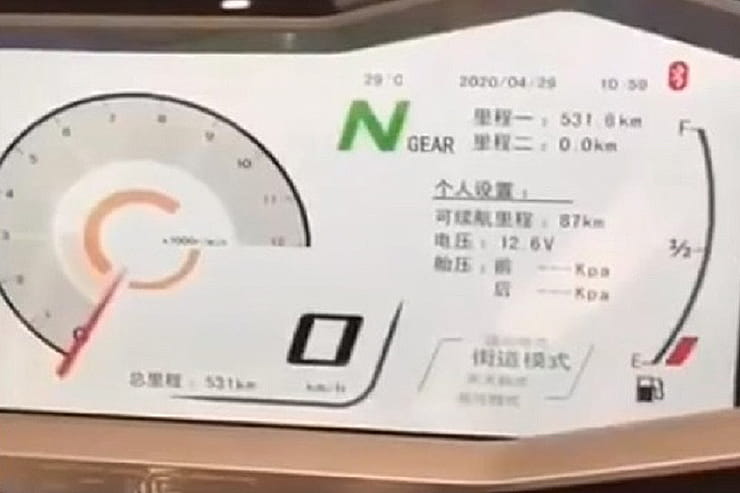 At least two of the bikes are already in the hands of Chinese police, giving sharp-eyed members of the public a chance to snatch pictures and even video of them in action.

One such video reveals the instrument panel to be a single, massive colour screen. Far larger than those we normally see on motorcycles, it also ditches the conventional rectangular shape for a wider, more interesting layout. There’s a separate cluster of warning lights above it, and further warning lights can appear in the black sections on either side of the main display. As seen in the initial pictures, the main display includes a large analogue rev counter, a digital speedo, water temperature, fuel level and gear position readouts. Other text on the panel includes range, trip, battery voltage and and tyre pressures, but the very nature of a colour LCD display means it’s sure to be able to be adapted into a variety of different layouts. 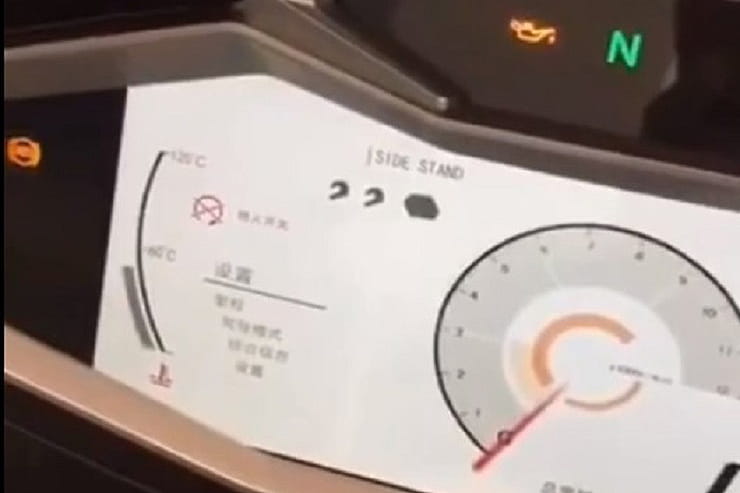 The appearance of the CFMoto CF1250 in police hands could be bad news for the firm’s main Chinese rival, Qianjiang, which has been developing a 1209cc three-cylinder Benelli tourer in an effort to snag the massively lucrative contract to supply China’s security services and police with bikes.

The Benelli BJ1200 (below) is also on the verge of being ready for the limelight, and both police and civilian versions have already been type-approved in China. Spy video of one prototype police-spec example recently revealed that it has a more conventional dashboard than the CFMoto, with mechanical gauges for the speed and revs flanking a smaller, rectangular colour LDC readout. However, its party tricks include auto-folding mirrors that retract when the keyless ignition is switched off, and at the same time the electric screen drops to its lowest level to make the bike as small as it can be.

In terms of spec, the Benelli is approved with 100kW (134hp) – fractionally less than the CFMoto manages – and it’s significantly heavier at 340kg ready-to-go in police spec (338kg for the civvie version).

With both the CFMoto and Benelli tourers expected to get some sort of official public unveiling in the next few months, 2020 is going to be a landmark year for the Chinese bike industry. However, what we’d really like to see is a production version of the CFMoto V.02-NK concept that was revealed back in December 2017… 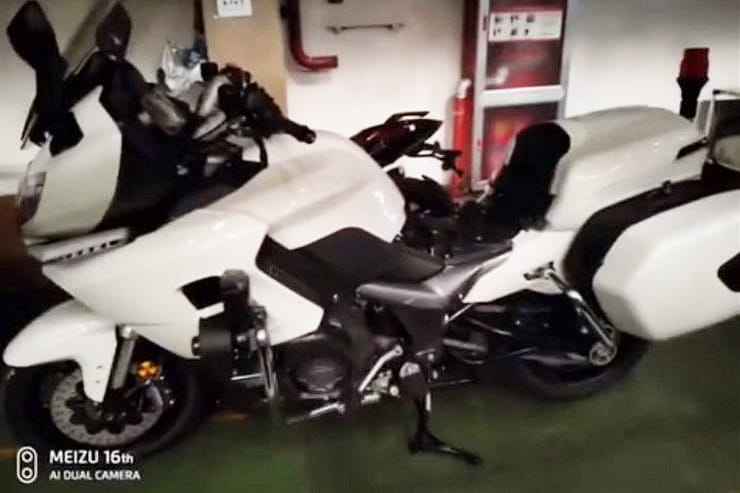