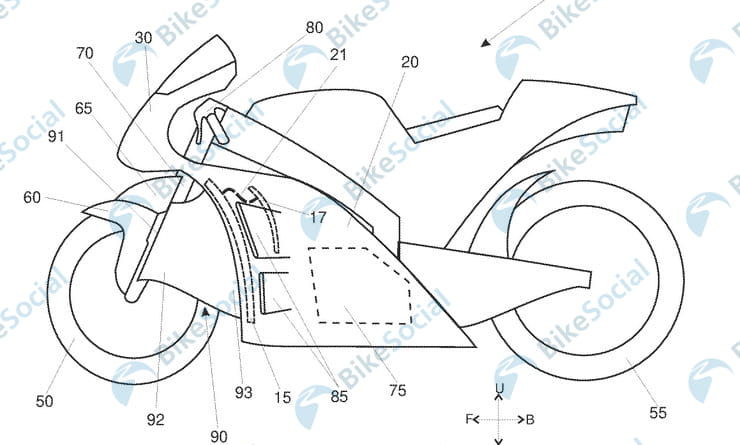 A newly-published patent application shows how Aprilia was planning to shake-up MotoGP aerodynamics before being stymied by a 2020 rule change – but the idea could yet make sense on a road-oriented superbike.

The patent focusses on one of the most persistent problems of race bikes; getting enough cooling air to the radiators without creating any more drag than necessary.

The traditional position of a bike’s radiator, between the engine and front wheel, is a major compromise when it comes to packaging and aerodynamics. The mass of the radiator and the water inside it mean it’s useful to put it here rather than, say, under the seat, and it is also exposed to plenty of airflow in this position. However, the airflow reaching the radiator is inevitably disturbed by the front wheel, which means the radiator needs to be larger than it would if it could access cleaner airflow. That, in turn, brings a weight and packaging penalty. 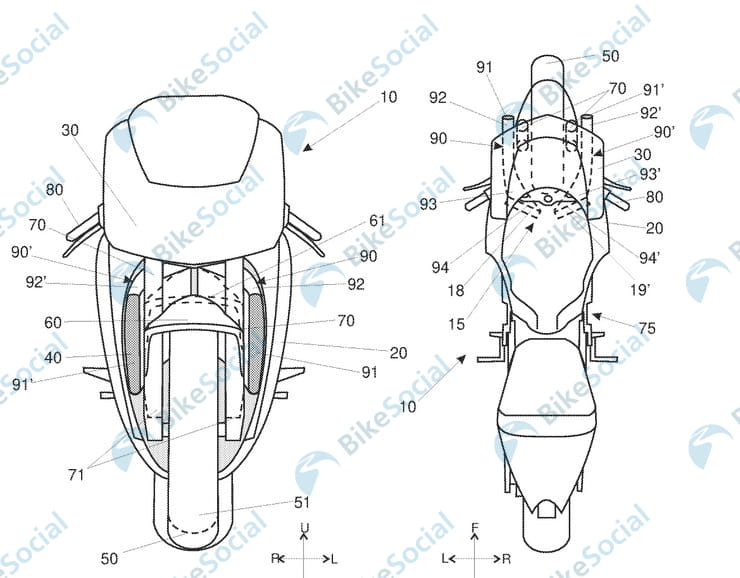 Aprilia’s idea, clearly illustrated in its new patent, is to run air intake ducts forward from the radiator, alongside the front wheel, to expose the intakes to a supply of undisturbed air.

That, in turn, allows the intake openings and the radiator itself to be made smaller, saving weight over a conventional layout. What’s more, the design cleans up airflow over the outside of the bodywork, using the forward-thrusting air intakes to clean up the sides while an extension on the top of the front fender closes off the opening above the front wheel during acceleration when the forks extend, pushing air to the sides and away from the ‘parachute’ shaped radiator opening. When the forks compress during braking, the fender-top extension slots up inside the nose fairing. 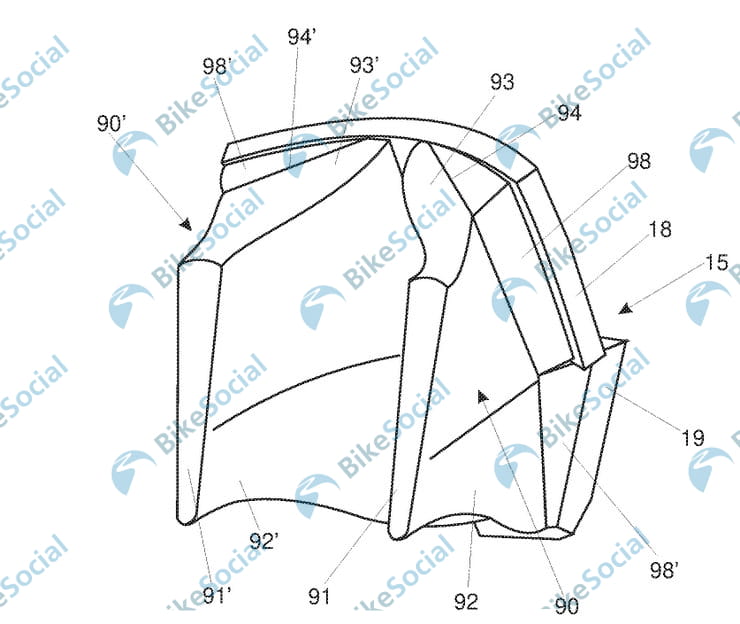 The key element of the idea is the exaggerated air ducts on either side of the front wheel. It’s illegal under MotoGP regulations to have bodywork in this area, under rules originally penned to ban dustbin fairings decades ago, but until this year a loophole existed that allowed a ‘removable air-intake’ in this zone.

When viewed from the side, it must be possible to see:

b) The whole of the front rim, other than the part obscured by the mudguard, forks, brake parts or removable air-intake.

That wording clearly left an opening for the design see in Aprilia’s patent, but in the 2020 regulations there’s an update that puts much tighter limits on the bodywork, replacing section b) with the text:

b) The whole of the front rim (to this extent the rim is the circular portion of the wheel fitting the tyre, with the exception of hub and spokes), other than the part obscured by the Front Fender, forks, brake parts or front suspension attachments.

With the exemption for removable air intakes gone, it seems Aprilia’s idea, shown in this patent, has been killed before it had a chance to shine.

However, there is still a chance that someone will take advantage of this way of thinking, as the ‘removable air intake’ loophole for bodywork obscuring the front wheel hasn’t (yet) been changed in the Moto2 and Moto3 regulations.

Aprilia’s decision to file for a patent on the idea also hints that it could intend a production machine with a similar setup. Under WSBK rules, this sort of bodywork would probably be legal provided it was already present on the homologated road-going bike that the racer was based on. What’s more, patents are really intended to protect commercial ideas, not those used on competition bikes. It’s rare to patent a design that’s only used on a race bike, since rivals racers would still be able to copy it without infringing the patent.

In WSBK, by contrast, demands that competitors keep road bike-based elements mean that if this layout was used on a road-going machine and offered a real advantage on track it could be exclusive to Aprilia. Bearing in mind that an updated or all-new RSV4 is surely overdue, and Aprilia’s parent Piaggio is also working on ideas like active aerodynamics, it will be fascinating to see what technology the next-generation Aprilia superbike features.