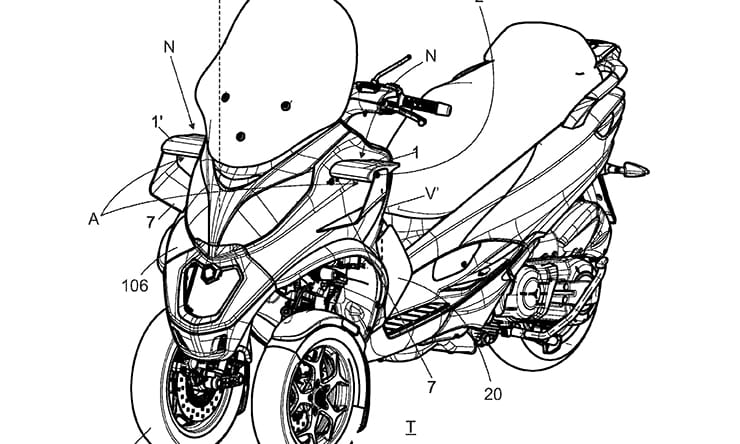 We’ve talked before about the idea of active aerodynamics and it looks like Piaggio is on the same page with the development of a system that independently moves winglets on either side of a bike to help it tip into corners.

Although the firm’s new patent depicts the system fitted to an MP3 scooter, that could well be a diversion tactic. With double front wheels, the MP3 isn’t short on front-end grip already, and neither is it a high-performance machine that’s likely to benefit hugely from downforce. Remember, Piaggio is the parent company of Aprilia and Moto Guzzi, so it’s got plenty of faster, two-wheeled bikes that might get a greater benefit from the idea.

Digging deeper into the patent’s text confirms that Piaggio aims to use the system on two-wheelers as well as tilting trikes, and since WSBK regulations were revised last year to confirm that active aero is legal in competition provided the same system is standard on the homologated street version of the bike, it makes most sense for the idea to be carried forward on a next-generation Aprilia RSV4 superbike. 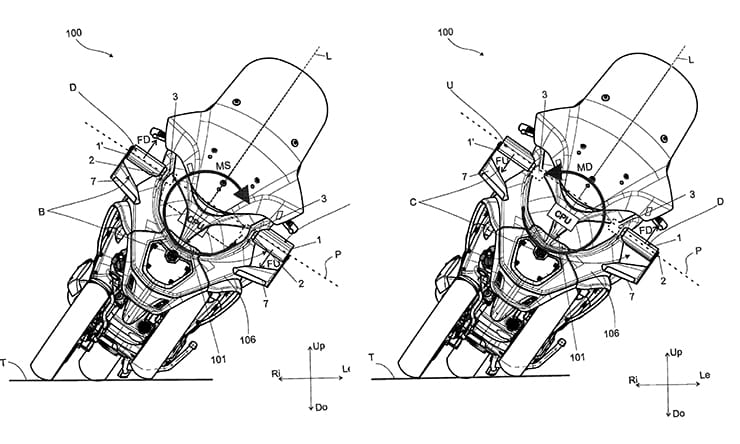 Since wings are normally associated with aeroplanes, it makes sense that the moving winglet arrangement follows the same thinking. And that’s precisely what the Piaggio’s system does.

With two, independently-moving winglets, activated via a computer control system allied to an inertial measurement unit, the bike doesn’t just alter its overall lift or downforce but helps itself lean into corners and return to vertical on the way out of them.

According to the patent, on the way into a corner the winglets act in opposite directions, so the one on the outside of the curve creates lift and the one on the inside creates downforce. The result is that the bike will be banked into the corner. On reaching the required amount of lean, the winglets move to act in sync. Typically, the idea here  would be for both sides to create downforce, pushing the front of the bike into the ground to increase grip, but the patent also suggest there are times when it makes sense for them to actually create lift, reducing the weight on the front wheel to lighten the steering, for instance when flicking from one direction to the other.

At the end of a corner, the inside winglet is angled to create lift while the outer one turns the other way to create downforce, helping to reduce the amount of lean. 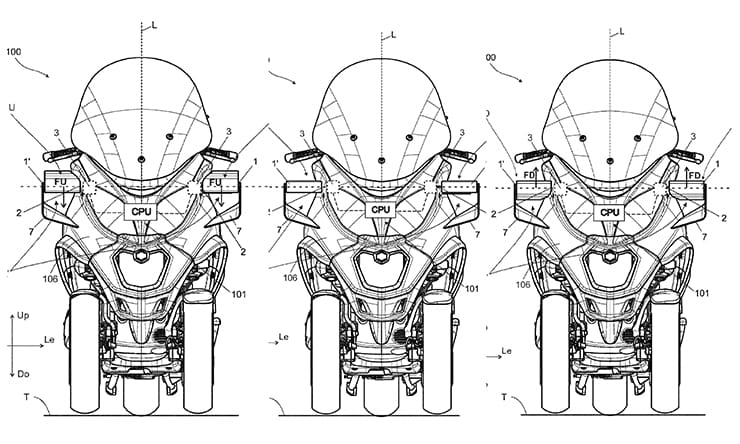 As well as the cornering advantages that the system could provide, the patent suggests that by moving both winglets to their maximum-downforce position can create an air-brake effect, helping slow the bike down. Similarly, they could also be moved in response to acceleration and outright speed in a straight line, for instance adding downforce under hard acceleration to help prevent wheelies and then levelling out to a neutral, low-drag state as speed increases and acceleration tails off.

It’s worth noting that Aprilia’s original concept version of the forthcoming RS660 sports bike, shown in 2018, included logos suggesting it had an active-aerodynamics system, despite nothing of the sort actually being visible on the bike. There’s no sign of the system on the production version that was revealed late last year, but it’s clearly an idea the firm is keen on, and with a new RSV4 superbike believed to be under development at the moment it’s sure to be something that’s under consideration for that machine.