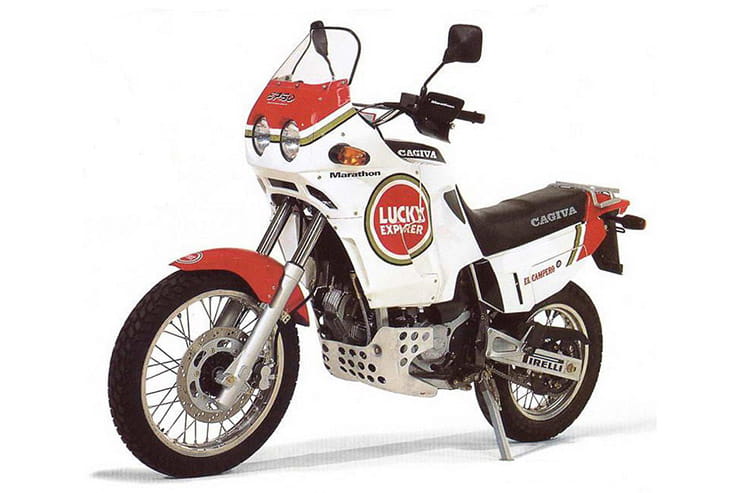 Retro-inspired adventure bikes are a clear trend at the moment and any manufacturer with heritage in the class is rummaging through its archives to come up with a suitable offering.
Whether it’s Honda’s Africa Twin – a resolutely modern bike that draws on the history of its older namesake – or more obviously old-style bikes like Guzzi’s V85TT and BMW’s R nineT Urban G/S, the desire to draw links with the heyday of the Paris-Dakar rally is clear to see. Other examples include Suzuki’s new DR Big-inspired V-Strom 1050 and Aprilia’s forthcoming Tuareg 660.

MV Agusta might not have a direct Dakar history, but despite that the firm is keen to get in on the adventure market and it’s likely to draw on the heritage of the Cagiva brand when it does so. Last month, boss Timur Sardarov told Italy’s Motociclismo that an adventure model is part of the plan, and now the firm has filed a new European trademark application for the name ‘Elephant’, with plans to apply it to motorcycles, motorcycle suspension, clothing and accessories.

Of course, Cagiva made a similar name famous with the Italianized spelling ‘Elefant’, winning the Dakar in 1990 and 1994 using the famous machines in their iconic Lucky Explorer colours. Cagiva was, of course, founded by Giovanni Castiglioni in 1950. Initially making components, his sons Claudio and Gianfranco turned it into a major motorcycle brand between the late 1970s and the 1990s. Such was their success, Cagiva (CAstiglioni GIovanni VArese) swallowed up several other brands including Ducati, MV Agusta, Husqvarna and Moto Morini during its peak. Claudio Castiglioni’s determination to revive MV Agusta led to him selling Ducati and Morini, and investing the proceeds in developing the MV F4, rebranding Cagiva as MV Agusta in the process.

The idea of reviving the Elefant (or Elephant) has been around for a while. The original Dakar-winner was, of course, powered by the Ducati V-twin engine, but any new model would use an MV-designed motor. As long ago as 2007 MV Agusta regained trademark rights to the Italian ‘Elefant’ version of the name, but that trademark expired in 2017.

The firm also gained European and American trademark rights to the ‘Elephant’ name in 2010, but those have also expired, hence MV’s new application for the title, which it submitted on 7 February this year.

The complex history of Cagiva and its various subsidiaries and partners means that MV Agusta isn’t the only firm with a claim on the Dakar-winning heritage of the original Cagiva Elefant. Ducati also has close ties to the bike, since it provided its engine and was part of the same company when the Elefant was at its peak. The Elefant was even sold as a Ducati, the E900, in some markets. As recently as November last year Ducati showed its Scrambler Desert X concept bearing some very familiar, Lucky Explorer-inspired colours and retro Dakar racer styling.