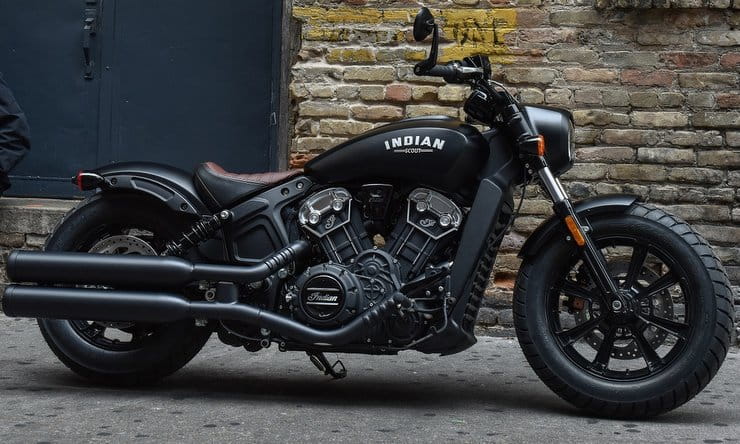 Earlier this month we revealed American documents that confirmed Indian’s plans to launch a smaller-capacity version of the Scout Bobber. Now we’ve got much more detailed information and confirmation that the bike is also Europe-bound.

The Scout Bobber Sixty will be a 1000cc V-twin sharing the same engine as the Scout Sixty rather than the 1133cc version used in the existing Scout Bobber (pictured above). That motor is harnessed to a five-speed transmission rather than the six-speeder of the larger engine, and peaks at 76.5bhp (77.5PS, 57kW) compared to the 94hp (95PS, 70kW) of the 1133cc unit. Torque is also down, peaking at 65lbft compared to 71.5lbft.

Unusually, the smaller-capacity V-twin – which is downsized via a smaller 93mm bore against 99mm on the 1133cc version while retaining the same 73.6mm stroke – is lower-revving. Peak power arrives at 7300rpm, down from 8000rpm, and max torque arrives at 5000rpm instead of 5600rpm.

Although Indian has yet to officially reveal the bike, we’ve seen detailed specifications for the Scout Bobber Sixty. Unsurprisingly, most of the bike dimensions are identical to the 1133cc Scout Bobber, with the same length, wheelbase, breadth and height, but somehow Indian has sliced an impressive 11kg from the weight. That means the Indian Scout Bobber Sixty comes in at 250kg complete with a full 12.5 litre tank of fuel. Empty, it will drop to 241kg.

In comparison, the next-lightest model is the Scout Sixty with a fully-fuelled mass of 255kg, while the 1133cc Scout is 264kg and the larger-engined but otherwise identical Scout Bobber is 261kg.

As a side effect of the Scout Bobber Sixty’s lowest ready-to-ride weight, the bike also has the largest load capacity in the range. All versions of the Scout share the same a certified maximum weight of 449kg

Despite the reduced power, all versions of the Scout share the same official top speed of 120mph, suggesting there’s an electronic limiter at play.

At the moment we don’t know what visual clues will distinguish the Scout Bobber Sixty from the larger-engined version but it’s likely to feature different wheels and a handful of lower-spec components to reduce cost. When will it be launched? There’s no definite date yet, but Daytona Bike Week is just around the corner – running from 6-15 March – and would provide a useful platform for a new-model reveal.