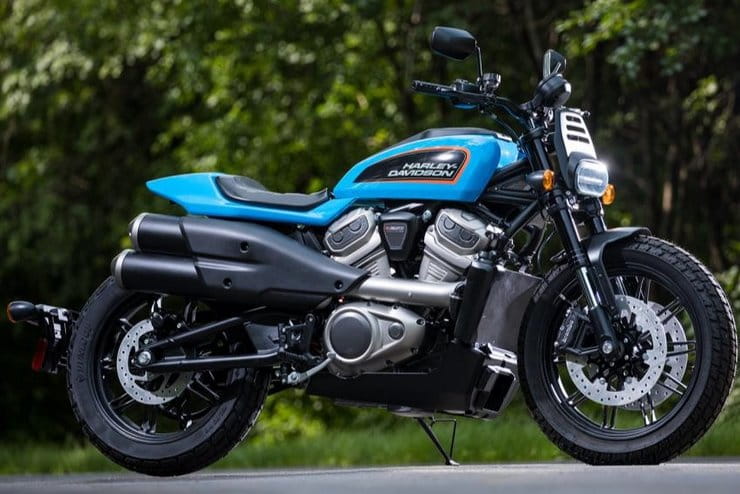 Harley-Davidson might be going through a rough patch at the moment but accusations that the firm isn’t trying to appeal to a broader spread of riders with its future product range are wide of the mark. Hot on the heels of the Pan America adventure bike and Bronx streetfighter it showed last November the firm is preparing two further water cooled V-twins – a cafe racer and a flack tracker.

The two new bikes were first shown in an investor relations document published last September and now Harley has filed design patents for production versions of both new models.

Both bikes are in line with the plans that Harley announced back in July 2018. At the time the firm showed early images of the Pan America adventure bike and the Bronx – albeit without that name – as well as a 2021 water-cooled custom bike that has yet to be revealed in detail. All three bikes were based around the ‘Revolution Max’ engine, a DOHC, water-cooled V-twin that’s set to be available in 1250cc and 975cc forms.

Back in 2018 Harley said that the designs represented the first models in three new ranges. Eventually there will be two adventure models, five bikes in the ‘Streetfighter’ range (the Bronx is the first) and five ‘High-Performance Custom’ models. There will also be four ‘Standard’ models based on the same platform.

The cafe racer and flat tracker seen here are likely to be the next two models in the ‘Streetfighter’ line. 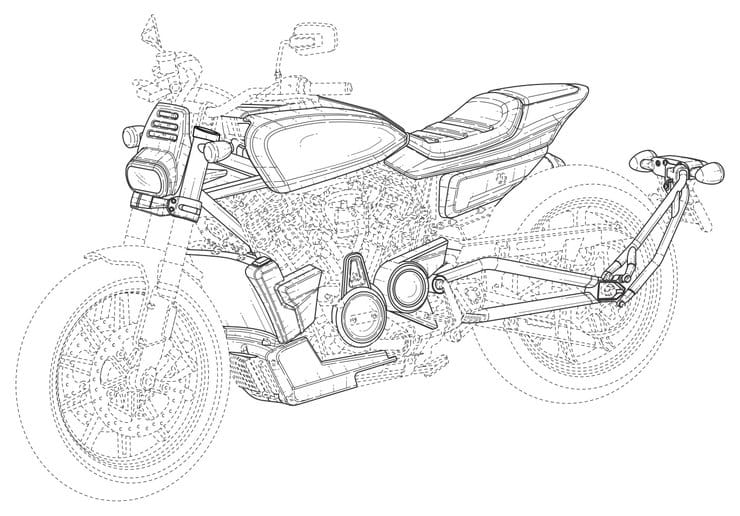 Starting with the Flat Tracker, the bike clearly uses the same Revolution Max engine as the Pan America and Bronx, and while it’s hard to be certain due to the low-resolution of the photo, the prototype pictured in Harley’s investor relations document appears to have ‘975’ written on its air filter.

The relatively narrow rear tyre backs up the idea that it’s the smaller engine, which debuts in the Bronx with claims of ‘more than 115 horsepower’ and ‘more than 70lbft peak torque’. In comparison, Harley says the 1250cc Revolution Max used in the initial version of the Pan America adventure bike makes over 145hp and 90lbft.

Chassis-wise there’s a tubular steel frame, but it looks like the engine forms a major structural component. A tubular swingarm at the back acts on a monoshock via a rising-rate linkage. Small tweaks can be seen between the photographed prototype in Harley’s investor document and the new patent drawings include a repositioned rear brake caliper, moved from above to underneath the swingarm, moved front indicators, a repositioned dashboard and more intricate shapes on the bellypan, which houses an oil cooler, and radiator cowls.

Interestingly, the bike appears to be a pure single-seater, with no provision for pillion footrests. 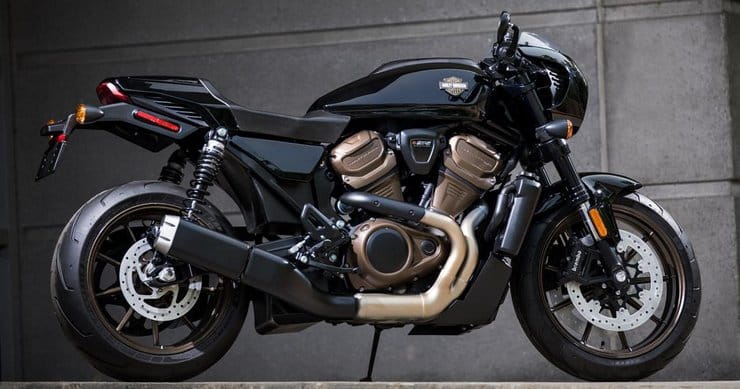 Moving on to the cafe racer, the initial version again appears to be planned to use the 975cc engine, with ‘975’ written on the air filter, although it’s quite possible that both the Bronx and the cafe racer will eventually be offered with both engine sizes.

The frame is again similar, but not identical, to that used on the Bronx and the new flat tracker. Notably there are twin shocks at the back rather than a rising-rate monoshock, fitted to a simpler, straight swingarm. The front end appears identical to the Bronx and the flat tracker, with upside-down forks and Brembo radial brakes.

In terms of styling, there’s a single round headlight in a small fairing, but it’s clearly not the same design that was seen in October when Harley filed patents for a sportier fairing design similar to the old VR1000.

Again, Harley has tweaked the design between the image shown in the investor document last September and the new pictures from the design patent. The mirrors were bar-end versions on the earlier design but have been swapped for conventionally-mounted ones, and again the radiator cowl and oil cooler surround have been revised. The tank, seat and side panels are also slightly reshaped. 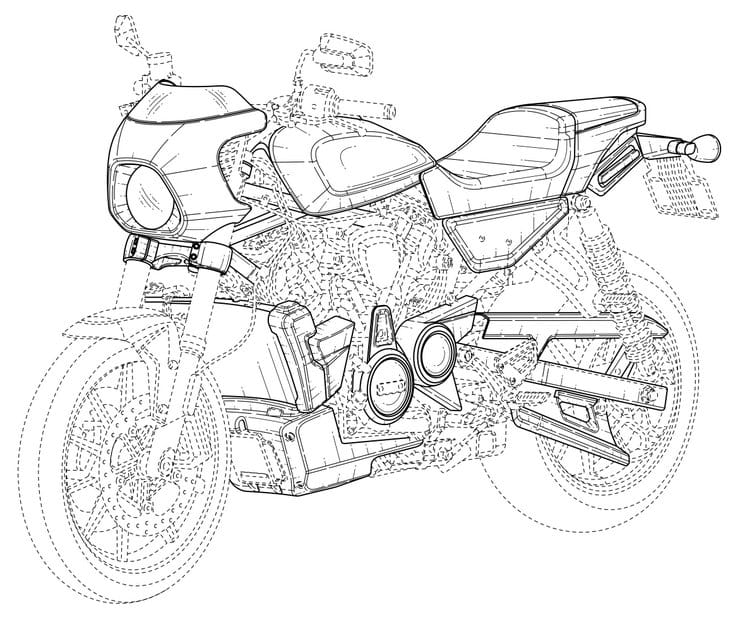 These two new models are also expected to be joined by an additional middleweight electric bike in 2021. Harley says that it’s going to launch between two and five electric models from 2021-22, and September’s investor document included this picture of a machine it described as a ‘mid-power electric’. The writing on the tank reads ‘EDT600R’ – perhaps standing for Electric Dirt Tracker?

The bike’s power unit is reminiscent of the LiveWire’s, but it’s clearly a smaller, simpler design. The finned battery pack casing appears to double as the frame, with the swingarm and forks mounting straight to it, and the styling is clearly in the dirt tracker mould.

While the LiveWire has been praised for its performance and range, the bike’s massive price means it’s never going to be anything more than a niche vehicle for early adopters. The EDT600R is likely to be a much cheaper offering, bringing a Harley electric bike within the reach of far more people.

Despite all the criticism Harley-Davidson gets for its staid cruisers, the three models seen here show that it’s a firm with a plan for the future. Would they, and the other planned new models like them, be enough to persuade you to ride a bike bearing the Harley-Davidson name? 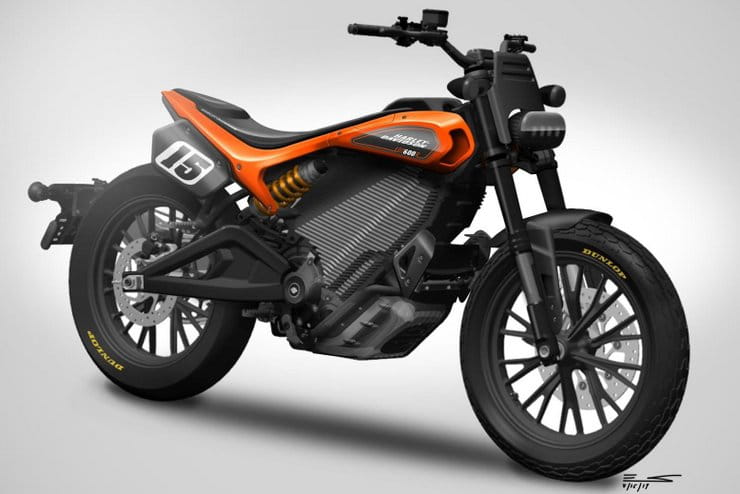