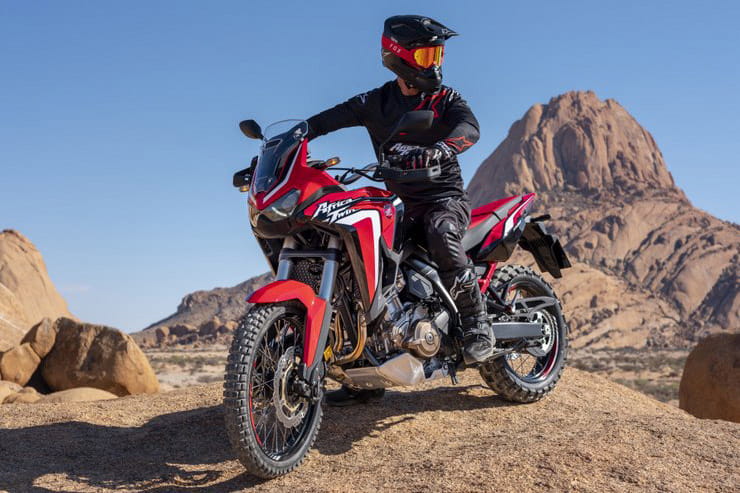 UK Prices unveiled, bikes are due into dealerships by the end of November:

Before we dig into the details, let’s just recap what we already knew. All three versions of the 2020 Africa Twin are built around a revamped version of the parallel twin engine, pumped up from 998cc and 94hp to 1084cc and 101hp at 7500rpm. The extra capacity comes courtesy of a lengthened stroke, up from 75.1mm to 81.5mm, while the bore remains unchanged at 92mm. As well as the power increase, there’s a hike in torque from 73lbft to 77.5lbft at 6250rpm.

The engine also gets revisions to meet Euro 5 emissions limits, including a new cylinder head with 46mm throttle bodies and reshaped combustion chambers, revised ECU settings, new valve timing and increased valve lift. The cylinders now have alloy liners rather than steel, helping save 2.5kg, and there’s a variable exhaust control valve borrowed from the Fireblade to open the pipes at higher revs. As part of the Euro 5 updates, Honda has added misfire detection to the engine and there’s a very obvious, enlarged catalytic converter encased in a protective aluminium cover.

As before, there are two transmission options – a six speed manual, revised to give easier shifts and with the option of a quick-shifter, or Honda’s DCT semi-auto, a box that customers tick on something north of 40% of UK Africa Twin sales. 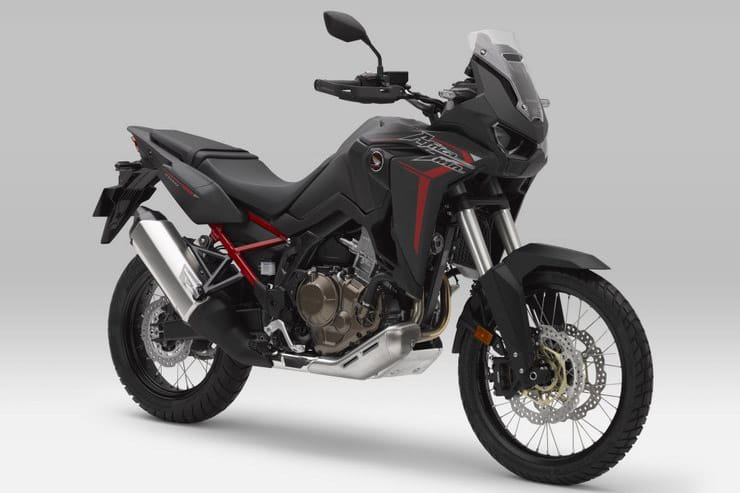 The engine changes are backed up with a new chassis. As before, the Africa Twin is based around a steel semi-double-cradle frame, but the new design feature slimmer main spars and optimised rigidity around the steering head. The old welded-on subframe is gone, replaced with a bolt-on aluminium design that’s 40mm slimmer, making it easier to get a foot down.

A new aluminium swingarm adds rigidity, but the frame’s geometry is unchanged with the same ground clearance and wheelbase as before.

Whichever version you opt for, Showa supplies the suspension, fully adjustable at both ends, while the top-of-the-range Africa Twin Adventure Sports EERA gets Showa’s electronically-adjustable kit. 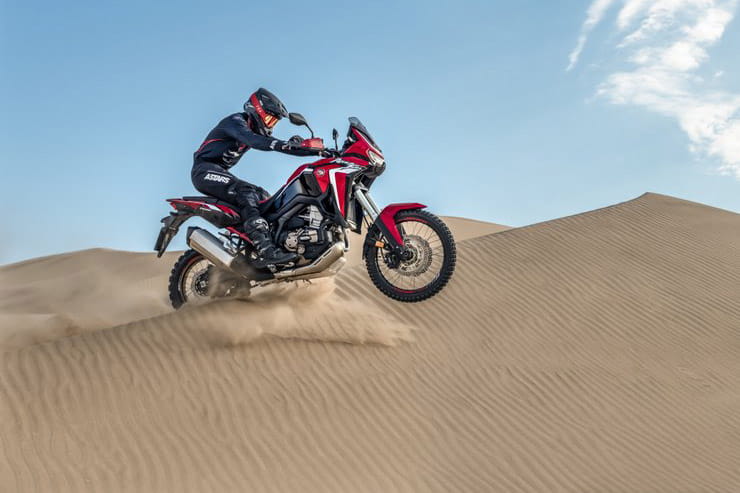 Most Africa Twins will spend their lives on the street. But this is what they’re capable of.

Technology includes cornering ABS, wheelie control and traction control (Honda Selectable Torque Control, or HSTC), which has been revised for 2020 with new settings and now uses a six-axis IMU.

The system offers four power levels and three engine braking levels, each informed of the bike’s yaw, roll angle and roll rate from the IMU.

Riders can pick from ‘tour’, ‘urban’ and ‘gravel’ riding modes, as before, but there’s now an additional ‘off-road’ mode and two rider-adaptable ‘user’ modes.

On board, there’s a new 6.5in TFT touch screen instrument panel that incorporates Apple CarPlay to give iPhone integration. Android users have to make do with a normal Bluetooth connection. Cruise control is standard and there’s an ‘emergency stop signal’ function that automatically flashes the hazards if you brake suddenly. 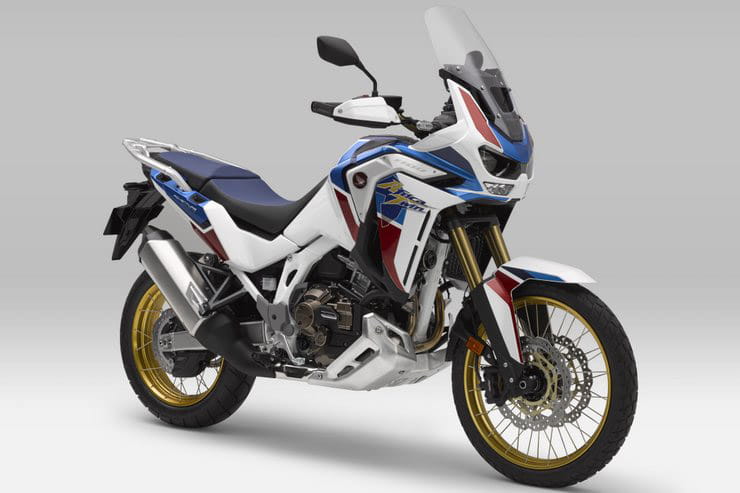 Both the Africa Twin and the Adventure Sports version get new styling for 2020. The base Africa Twin features a much lower screen than before, with the same seat height – adjustable from 850mm to 870mm – but 22.5mm higher bars for a more upright riding position.

The slimmer tail makes it easier to get a foot down and there are low (825mm-845mm) and high (875mm-895mm) seats as optional accessories.

The headlights are new LED units, mounted higher than before and the overall look is tighter and more muscular than before.

Turning to the Adventure Sports version, the more touring-oriented model gets a taller screen and larger front fairing, but its seat has dropped from 900mm-920mm on the old bike to the same 850mm-870mm of the stock Africa Twin. The seat is 40mm slimmer than before, and again there are ‘low’ and ‘high’ versions as optional extras, with the same heights as the base model’s.

As before, the Adventure Sports gets a larger, 24.8l fuel tank – up from 18.8l on the normal Africa Twin – to give a range of over 500km (310 miles). It also has a larger bash guard and more enveloping rear bodywork.

At the front, the new cornering lights are the most obvious change on the Adventure Sports. Sitting below the LED headlights, these three-stage units are controlled by the IMU to change the light pattern as you lean.

Another change is the introduction of tubeless tyres on the Adventure Sports, with different wheels to suit but the same dimensions as the base model’s – with a 21in front rim and 18in rear respectively carrying 90/90-21 and 150/70-18 rubber. 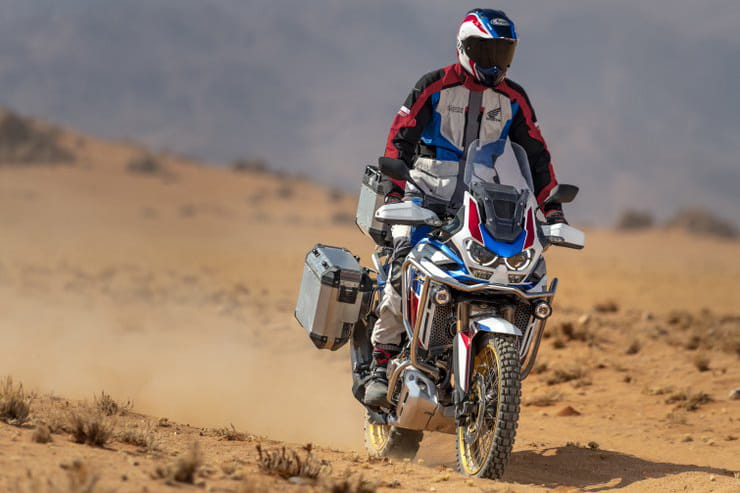 The system alters the damping levels as speed changes, tuning it for comfort at low speed and stiffening it as you go faster. It also changes depending on which riding mode is selected and uses information from the IMU and suspension stroke sensors to work out what setting is needed. Four settings – ‘soft’, ‘mid’, ‘hard’ or ‘off-road’ – can be selected to personalise the suspension’s reaction.

EERA also allows the rear preload to be adjusted electronically while the bike is stationary, with four default modes – solo, solo with luggage, two-up and two-up with luggage – to choose from. A fifth, user controlled mode lets you select from 24 preload settings.

Combined, the 2020 Africa Twin’s updates mean there are effectively six models to pick from – base, base with DCT, Adventure Sports, Adventure Sports DCT, EERA or EERA with DCT – before you even start picking bolt-ons from the options list. That list is going to include all the usual options; various sets of luggage in aluminium or plastic, seats, screens, radiator guards, tank bags, fog lights and engine guards are all coming.

We'll be testing the new bike at the International Press Launch at the beginning of October so stand by for the full review coming soon to BikeSocial.