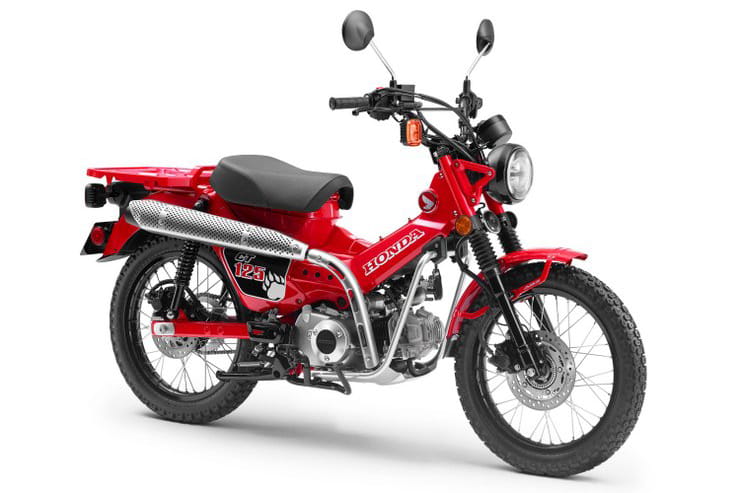 Honda revealed its CT125 as a concept bike at October’s Tokyo Motor Show and now it looks like the model is heading for showrooms under a different name.

The firm has applied for trademark rights on two possible titles for the bike in the USA, suggesting that the production model will be called either ‘Hunter Cub’ or ‘Trail 125’. Both applications were made in October, just days after Honda released preview images of the CT125 concept, and both hark back to historic predecessors of the same bike.

As a reminder the CT125 concept was based on the latest, Euro-legal Super Cub 125, so mechanically there’s no barrier to mass-manufacturing the machine. It’s a utility-style machine, with a rugged look and some dirt-road ability, and revives a ‘CT’ line that ran all the way from the early 1960s to 2008.

The first off-road offshoot of the Cub line appeared back in 1960 when Honda launched the C100H and C100T, created by pulling the bodywork off the C100 Super Cub. The Japanese-market C100H was known as the Hunter Cub, while the US C100T version went under the Trail 50 name (despite its ‘C100’ designation the bike used a 49cc engine).  Various versions followed, culminating in the CT110, or Hunter Cub/Trail 110, which featured a 105cc engine and gained particular fame in Australia where vast numbers were used as transport for postmen well into the 2010s.

Honda’s CT125 concept already looks like it’s ready for production, and the new trademark filings in the USA appear to seal the deal. It’s quite possible that, as with its predecessors, both the ‘Hunter Cub’ and ‘Trail 125’ names will be used, depending on where the bike is sold. In Japan the Hunter Cub name has greater resonance, while in the USA the Trail 125 title will be more familiar.

Whatever title it ends up with over here, it’s more than likely that the CT125 will appear on the European market as well. Mechanically it’s identical to the Super Cub 125, with a 9.5bhp four-stroke single making 7.7lb-ft of torque and driving through a four-speed transmission. Big wire wheels, knobbly tyres and a rugged pressed-steel chassis mean that it should have real go-anywhere ability, while a high-mounted exhaust and crash bars mean the occasional low-speed tumble shouldn’t cause much damage.

Given that Honda will currently let you ride away on a Super Cub 125 for a £49 deposit and £49 per month on PCP, there’s a good chance that you’ll soon be able to ride a CT125 – whether under the name Hunter Cub or Trail 125 – for little more than a typical iPhone contract.