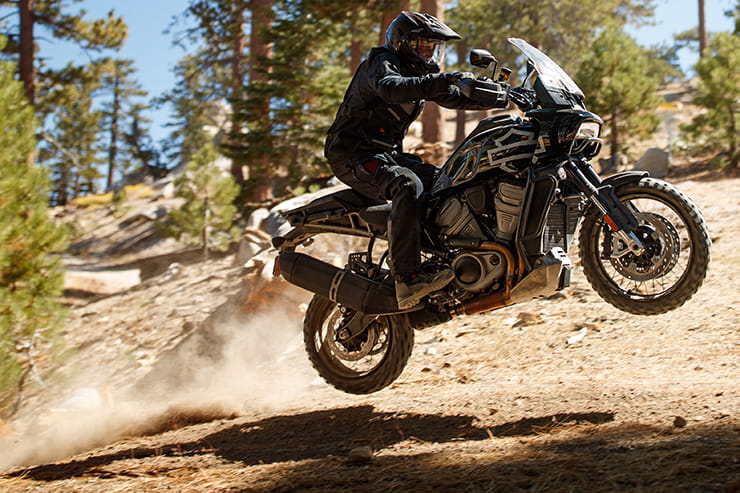 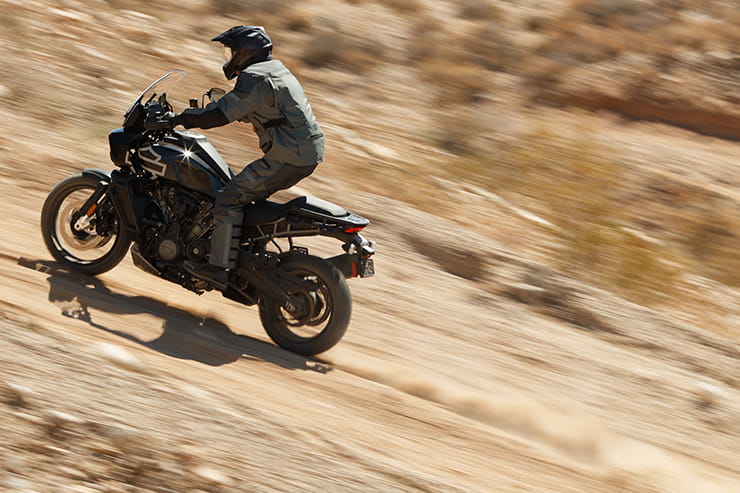 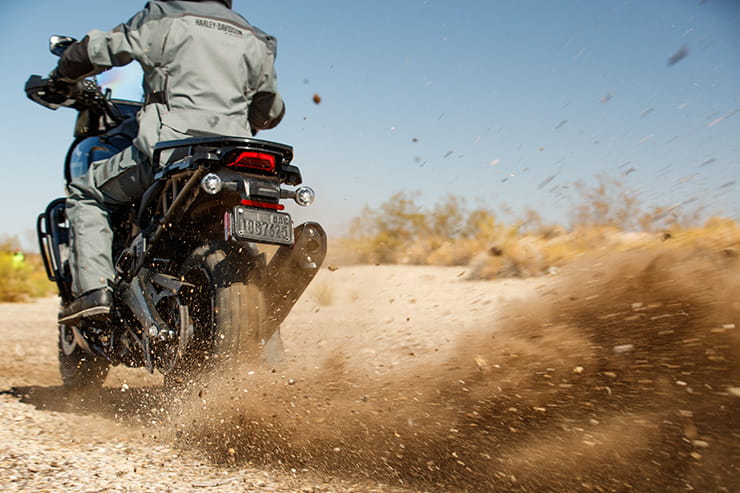 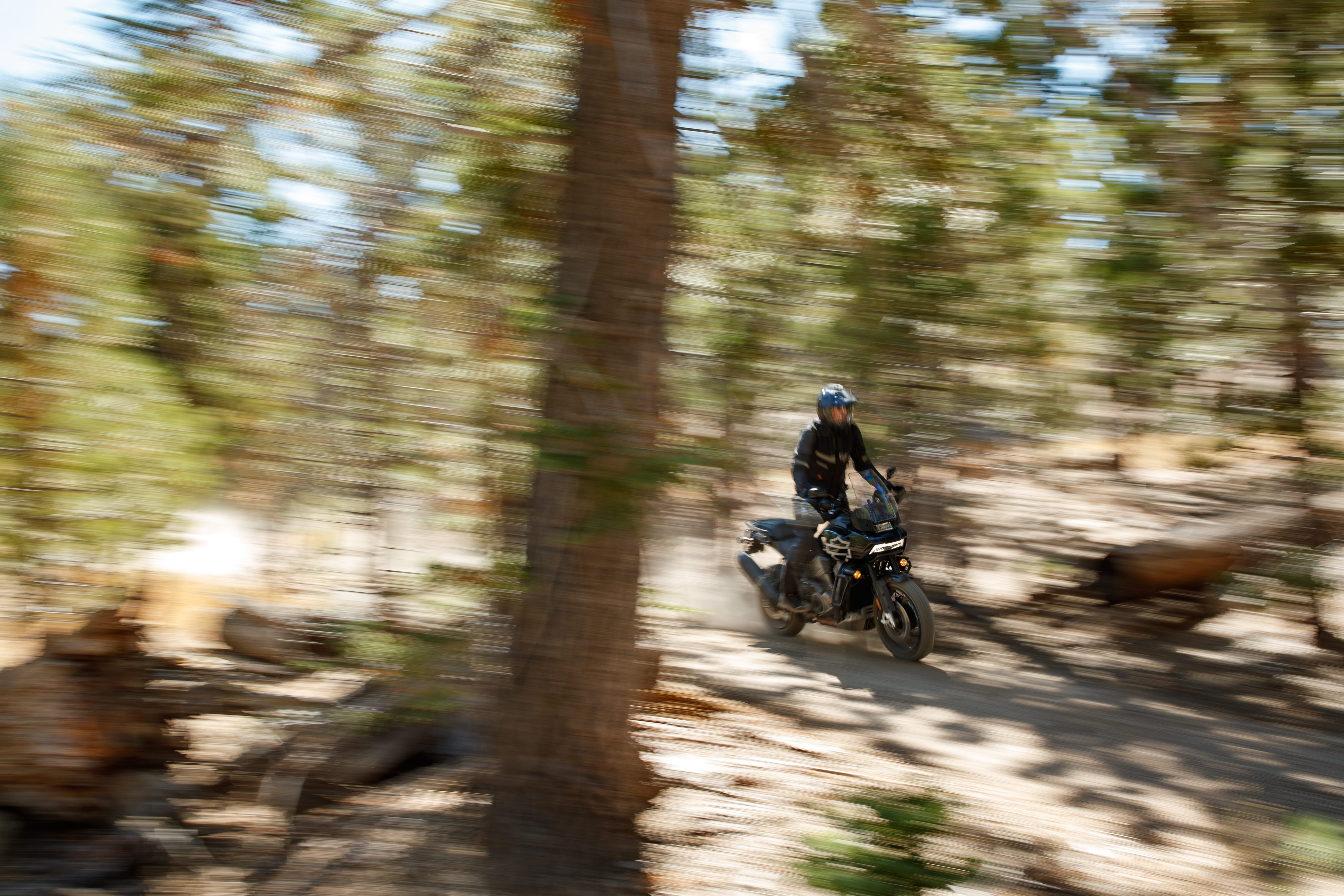 Harley-Davidson has confirmed that its adventure bike – the Pan America – will be available in late 2020, powered by a new 143bhp engine. A smaller version of this new ‘Revolution Max’ motor will also drive the new Bronx streetfighter… 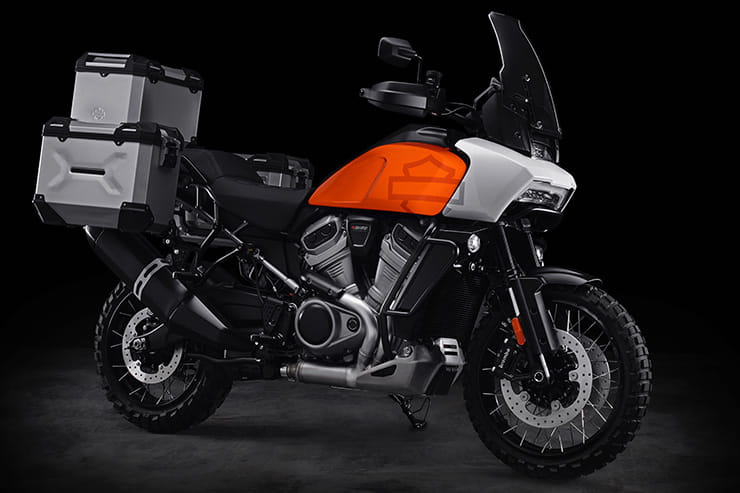 Described as an ‘all-new advanced adventure touring multi-purpose motorcycle’, the Harley-Davidson Pan America will be powered by a 1,250cc liquid-cooled ‘Revolution Max’ 60° V-twin. Harley says the new engine is ‘designed to offer flexible performance with a broad powerband that builds to a surge of high-RPM power.’

The radially-mounted four-piston calipers up front have been styled specifically for Harley-Davidson by Brembo, while Michelin has created Harley-branded tyres for the company to use on this, and the new Bronx streetfighter. 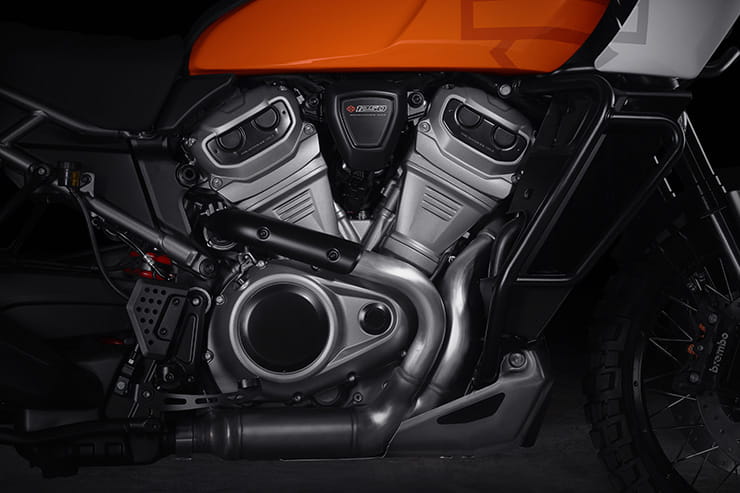 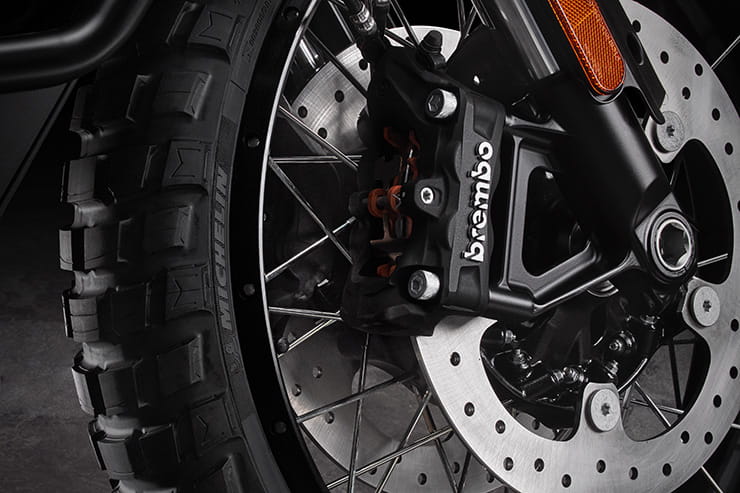 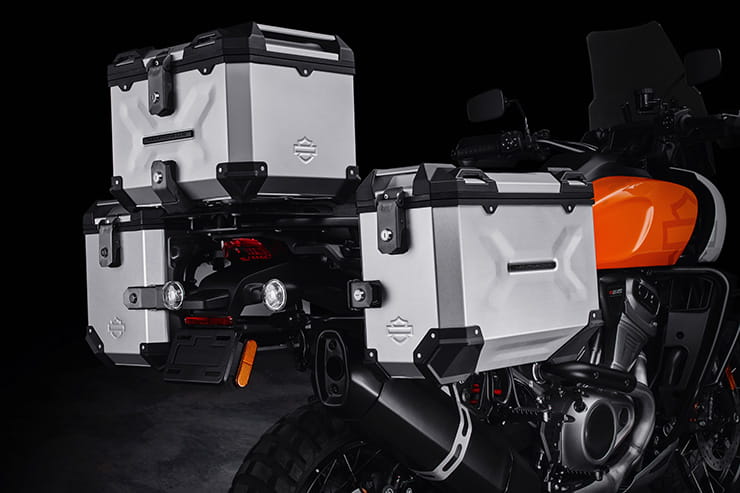 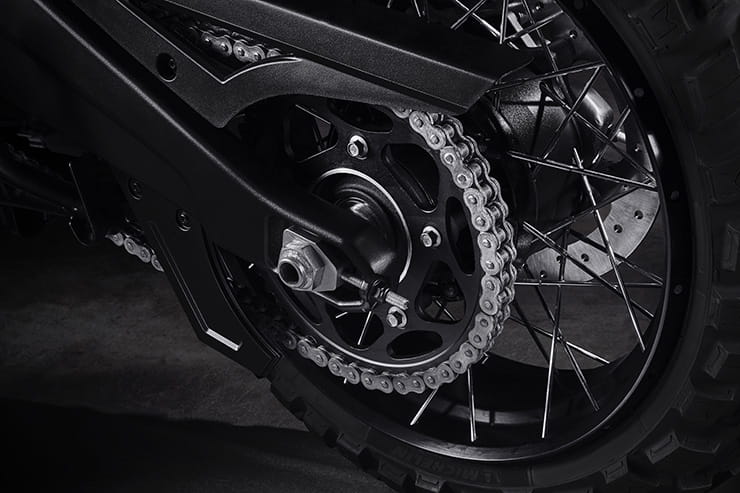 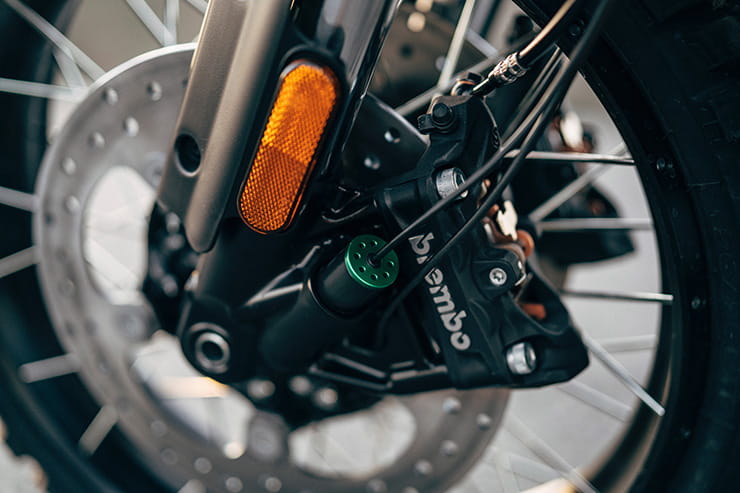 Apparently, the Pan America is ‘equal parts campfire, wanderlust, and grit… a two-wheel multi-tool built to endure, designed to explore, and engineered for the unknown.’

It’s a radical departure from the Harley norm, and looking at what appears to be semi-active suspension and some high-spec luggage, we’ve got to say that it’s a compelling motorcycle that’s making very good power and torque. From the pictures at least, this thing looks to be solidly built… If the weight is around the 250kg that is the norm for big adventure machines, and the fuel tank is a decent size, this could be a real turning point for Harley. 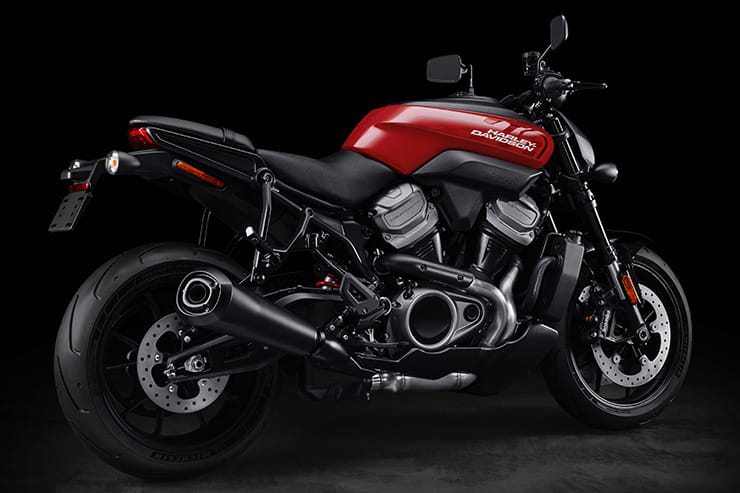 What do we know about the Harley-Davidson Bronx?

Listed as a ‘future bike’, the Harley-Davidson Bronx is a ‘middleweight streetfighter model that rolls with an unapologetic attitude and performance to match’, the bike is said to be going on sale by the end of 2020.

It’s powered by a 975cc version of the new ‘Revolution Max’ motor that’s in the Pan America – here it makes ‘more than’ 113bhp and 70lb-ft (94Nm). As with the adventure model, if the weight is kept to a minimum (with the engine as a major component of the frame, that’s very possible) this could be a bike that sees open-minded riders benefitting from the motorcycle market getting a lot more varied and exciting.

Interestingly, the Bronx has standard suspension adjusters on the top of the forks where the Pan America has a wire coming out of the top of the left fork leg, which definitely looks like semi-active suspension. But both have a cannister with a wire coming out of it on the bottom of the left fork leg, which appears to be Showa kit. This looks like an electronically-controlled solenoid operating rebound damping as the Bronx clearly has compression and preload adjusters on the top of its forks.

Of course, Harley-Davidson does stress on its website that these are pre-production bikes, and details may change… 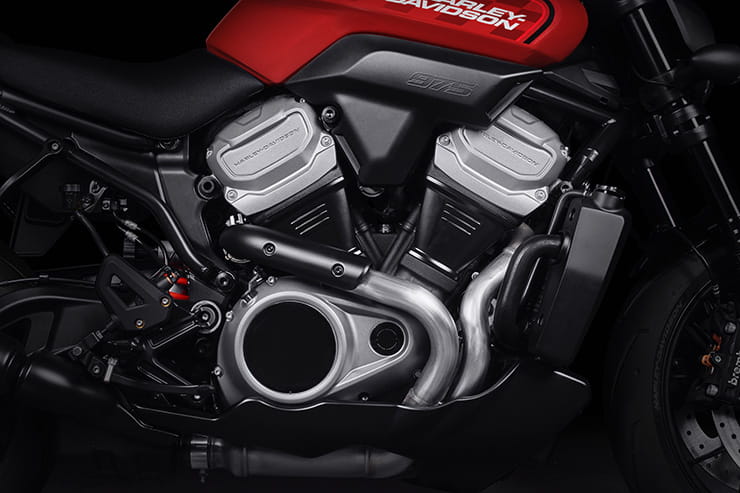 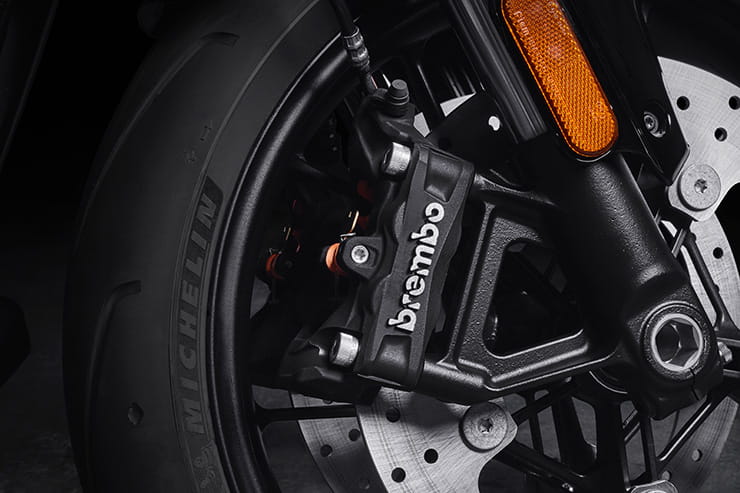 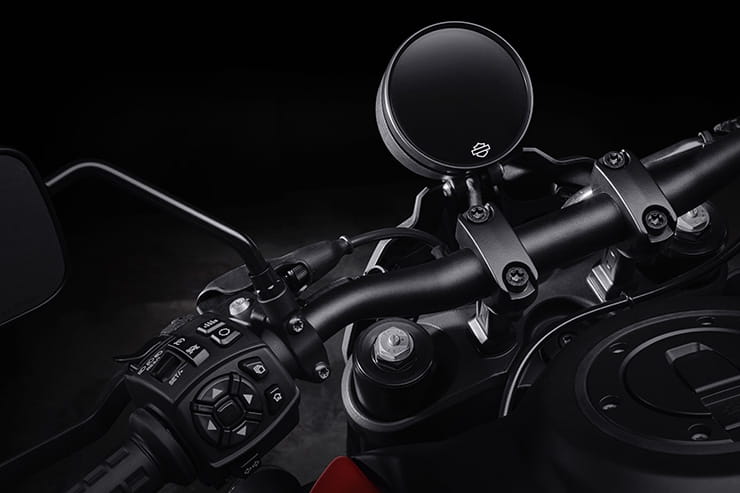 Studying the first images, ground clearance looks great – our highly unscientific measurements indicate a 43° lean angle before the pegs touch down. It might not make the mind-blowing power of the new Ducati V4 Streetfighter, but it sits very comfortably between the Ducati Monster 820 and 1200.

Mark this day in your diary as the point Harley-Davidson truly began its transformation. We’re certainly looking forward to our chance of the first review of both of these bikes. 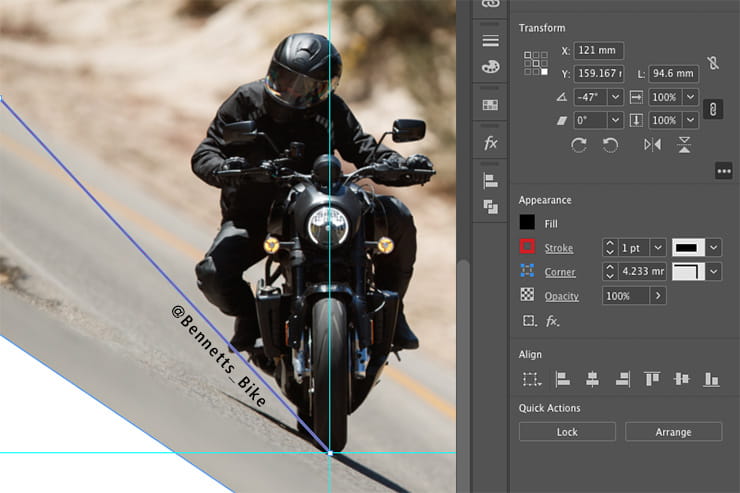