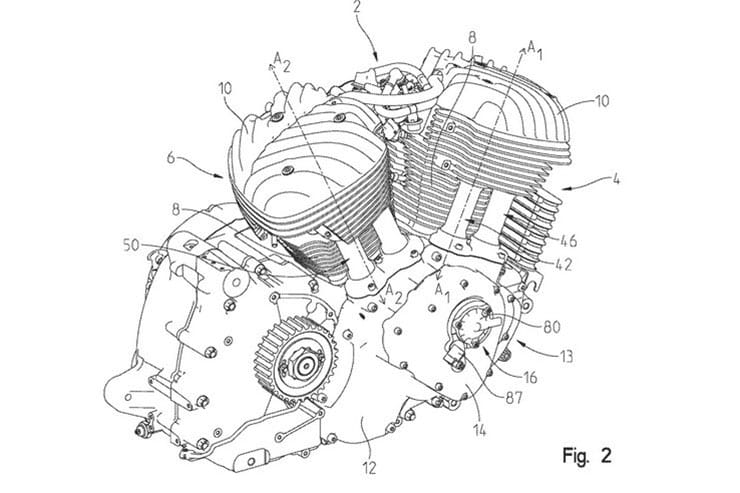 It’s been increasingly clear that as manufacturers prepare for Euro 5 emissions rules that variable valve timing is going to become an increasingly widespread technology. The latest evidence comes in the form of designs from Indian that reveal the American firm is planning to apply VVT tech to its massive Thunder Stroke engine.

The news comes courtesy of new patent applications filed in America that reveal how the firm can, with relative ease, add a variable valve timing system to its existing Thunder Stroke design. The technology should throw a lifeline to the air-cooled, pushrod V-twin that’s currently the keystone of Indian’s cruiser, bagger and tourer ranges. And what’s more, it suggests that the forthcoming DOHC, water-cooled ‘Legend’ model range that’s due to debut this August, starting with the 120hp, 1770cc Raptor bagger, is going to be an additional line-up rather than a replacement for the traditional air-cooled models. 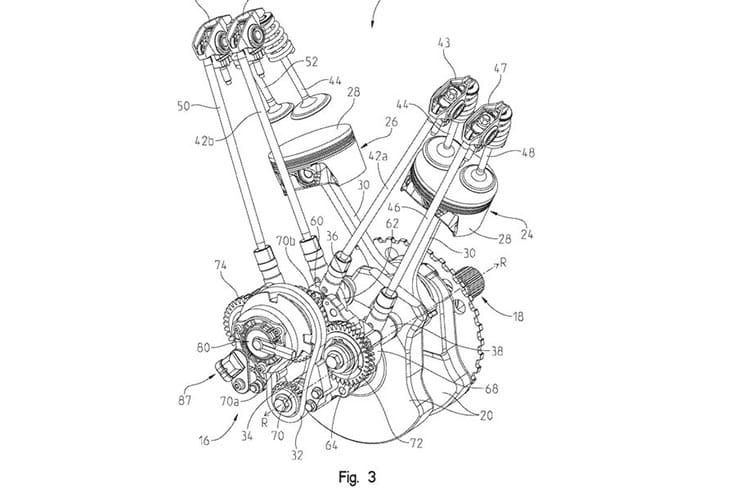 While we’ve seen VVT bikes before – notably Kawasaki’s GTR1400, Suzuki’s GSX-R1000 and Ducati’s latest Multistrada and Diavel models, not to mention the 2019 ShiftCam BMWs, which use a more sophisticated VVT/L system – this is the first time a motorcycle has combined variable valve timing and a cam-in-block, pushrod engine design. It’s unusual because normally we associate the idea of VVT with higher-performance, double overhead cam engines.

However, pushrods and air-cooling are vital to the traditional American V-twin cruiser style, and if it’s to remain available into the future, firms need to find ways to make such engines emissions-compliant.

Indian’s Thunder Stroke V-twin is actually a rather unusual design, as it’s a three-camshaft engine. A central camshaft lies in the V, operating the inlet valves on both cylinders via pushrods. It’s flanked by two, shorter exhaust camshafts, driven by gears from the inlet camshaft and each responsible for operating one cylinder’s exhaust valve, again via a pushrod. Odd though the design is, it actually makes it particularly easy to implement VVT.

Indian has opted for variable timing on the inlet valves alone, and that means it only needs to add VVT to the single, central camshaft. Exhaust cam VVT offers far less significant returns in terms of performance or emissions, so many manufacturers including Kawasaki and Suzuki have also stuck with inlet valve VVT.

The VVT itself is the most common style, a cam-phasing system using a hydraulic actuator that can shift the camshaft by a few degrees in relation to its sprocket, advancing or retarding the timing. A solenoid-operated valve controls the oil flow to the actuator, responding to commands from the engine management computer to control the valve advance. The same idea has been in use in cars for more than 30 years, and on bikes is shared by Ducati’s DVT system and Kawasaki’s GTR1400. However, the most similar design is that used by car firm Chevrolet to give the latest versions of its traditional pushrod V8 engines VVT; something it has done with impressive results. 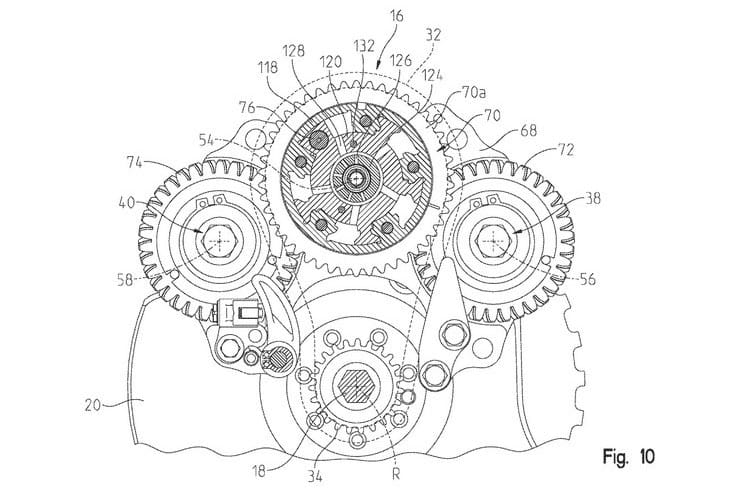 Indian’s patents appear to show that the VVT system can be added to the Thunder Stroke with minimal changes to its main components, which means there will be little need for new tooling and manufacturing processes. The engine cover over the camshafts is modified to accommodate the cam-phasing actuator and its solenoid, but most of the main castings don’t need to be modified.

However, the rumour mill suggests there will be other tweaks to the Thunder Stroke. At the moment, the current generation is the Thunder Stroke 111 – denoting its 111 cubic inch (1811cc) capacity – but the next version is due to be larger still. Indian currently offers a 116cu (1900cc) big bore kit, and that could become the standard capacity on future versions.

That would certainly help forge a greater distinction between the Thunder Stroke and the forthcoming 1770cc water-cooled engine, set to power the Raptor bagger and currently going under the ‘Legend’ codename. The water-cooled motor was originally intended for use in a range of Victory bikes, but the project was passed on to Indian when parent company Polaris decided to close Victory in 2017. With 120hp it’s more powerful than the Thunder Stroke – which makes around 90hp – but offers a very different appearance.

The VVT Thunder Stroke should give Indian the opportunity to retain its classic Chief, Chieftain, Springfield and Roadmaster models in the line-up well beyond the introduction of Euro 5 emissions limits, so it won’t have to force more traditional buyers to adopt the new water-cooled engine. It also suggests that the ‘Legend’ water-cooled range could be positioned slightly differently, perhaps adopting a more custom-style appearance to cater for the sort of riders who might previously have opted for a Victory rather than an Indian.

What is increasingly clear is that with the debut of a completely new large-capacity water-cooled bike range, a planned increase in the 1200cc Indian FTR line to include an adventure bike and a ‘street’ bike, and the creation of new VVT versions of the existing Thunder Stroke-powered models, Indian is set to become a firm with a much broader appeal than ever before. 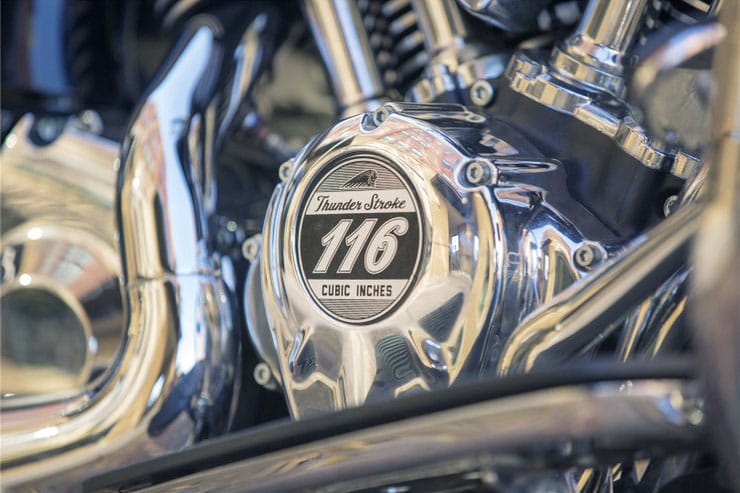