The next two years will see a seismic shift in the superbike market as at least three of the key Japanese machines come due for renewal, tying in scheduled model updates with the wholesale technical updates required by the forthcoming Euro 5 emissions rules.

Much has already been said about one of those bikes, the Honda Fireblade. It’s expected to be completely revamped for 2020, adopting variable valve timing and lift (VTEC) to ensure it bridges the power deficit to its rivals while simultaneously meeting the tighter emissions rules. You can read about that here.

But it’s not the only superbike coming up for replacement; both the Yamaha R1 and Kawasaki’s ZX-10R are approaching the same point.

Of the two of them, the Kawasaki is the greater mystery. It’s followed a pattern of gradual, yearly upgrades over the past few years, coinciding with its period of WSBK success, and at the moment there’s little firm information to suggest what the firm’s response to Euro 5 will be. But Yamaha’s a different story; the firm has spent the last couple of years filing patents that could give a clear insight into the developments coming to the R1, while leaving the 2015-on model basically unchanged since its introduction.

The Euro 5 rules are introduced in two stages. The first comes on 1st January 2020, when newly type-approved bikes will have to meet the tighter regulations. The second is 12 months later, at which point existing models will also have to be brought into line. That means the R1 is certain to be changed within the next 20 months.

So what can we expect from the next model? 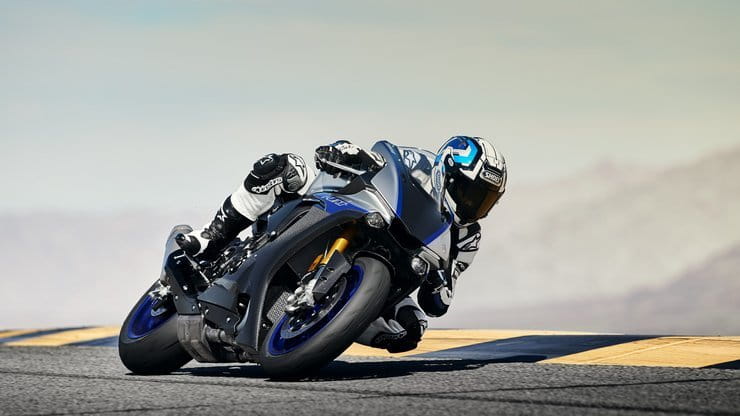 When Yamaha launched the current generation of R1 at the tail end of 2014 it marked a clear shift in direction for the firm’s range-topping superbike. Ever since the model’s first appearance way back in 1997 Yamaha considered the R1 a road-oriented superbike rather than a race-replica – so while the smaller R6 mimicked the styling of the M1 MotoGP bike, the R1 steered a more refined course combining more restrained colour schemes with its own distinct design direction. For the 2015 bike that changed, with the R1 adopting M1-inspired aerodynamics and design, and for the 2020/21 next-generation R1 we’re expecting the tie-in with MotoGP to become even closer. 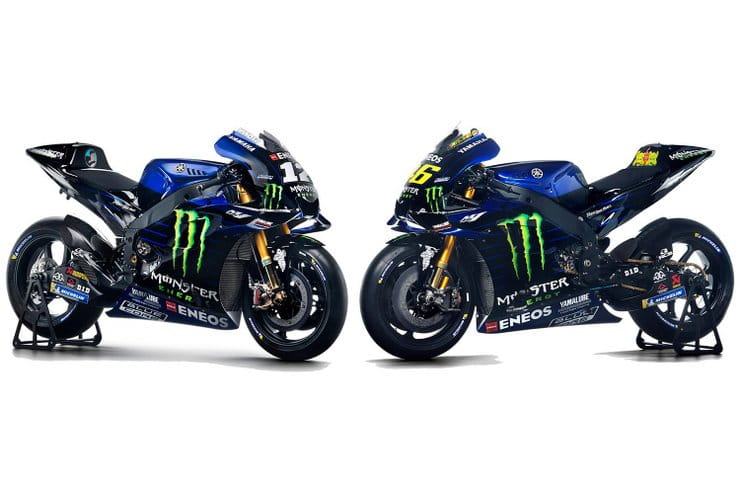 One of those changes is likely to be the adoption of a counter-rotating crankshaft. It’s a design Yamaha has been using in its MotoGP machines for more than a decade, and one that’s so successful that every one of its rivals now shares the same layout. There’s been a long wait to get the same idea onto the street, with MV Agusta’s F3 ploughing a lonely furrow as the only showroom sportsbike with the layout for several years, but now Ducati’s Panigale V4 has thrust the design into the superbike sphere with devastating effect, and it’s going to be hard for rivals to justify sticking to their old practises in the face of its success.

The idea of reverse-rotating crankshafts is to turn the engine ‘backwards’ in comparison to the wheels, cancelling out some of the stabilising gyroscopic effect that the turning wheels create and thus helping make it more flickable. The downside is that you need to add an extra jackshaft into the transmission to make the rear wheel turn in the correct direction, sapping a little power and adding some size and weight, but the evidence shows that it’s a worthwhile trade-off.

As Yamaha was one of the pioneers of the reverse crank revolution, many expected the firm to adopt the system back in 2009 when the V4-mimicking crossplane crankshaft made the jump from MotoGP to the showroom. So far Yamaha has held out, but surely for the next-generation R1 the reverse crankshaft has got to be on the cards. 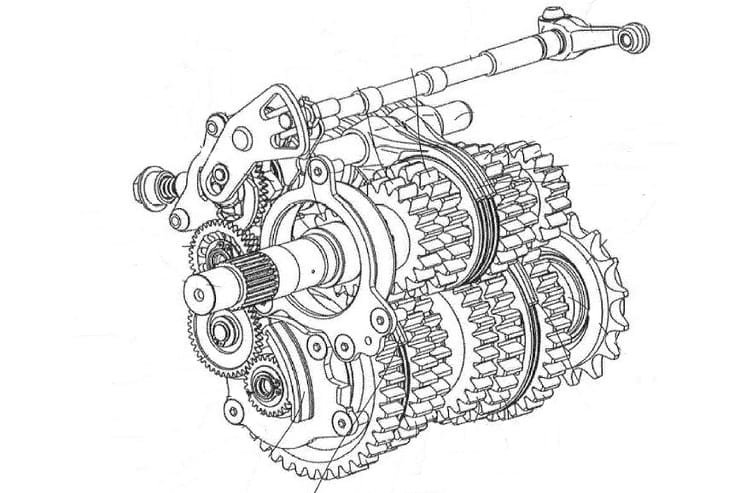 Next, we know that Yamaha is working hard on bringing another key MotoGP development to the streets in the form of a seamless-shift transmission.

Although up-and-down quickshifters are becoming the norm in road-going superbikes now, allowing clutchless shifts in both directions, the only street bikes to have truly seamless transmissions (where there’s absolutely no gap in the transmission of torque from the engine to the rear wheel during a gearchange) are Honda’s DCT dual-clutch models.

But DCT doesn’t lend itself to superbikes – it’s relatively heavy, and the addition of a second clutch adds needless complexity. It’s also banned in MotoGP, so every company currently competing in the series has adopted their own single-clutch systems that manage the same trick.

Last year, Yamaha filed patent applications for just such a single-clutch seamless gearbox, which show it fitted to the engine from the existing R1, leaving little doubt that the firm has plans to bring the technology to the street.

The system is extremely complicated to explain – each of Yamaha’s two patent applications for the design is more than 100 pages long – but the effect is to eliminate any break in power delivery.

Under acceleration in 1st gear, you can engage 2nd without using the clutch. On a normal transmission, there’s a brief moment when neither gear is engaged, and drive to the rear wheel stops for a fraction of a second. On Yamaha’s seamless transmission, though, both 1st and 2nd are engaged simultaneously for a moment. As drive from the engine transfers to 2nd, accelerating the output shaft, it takes the pressure off 1st gear, allowing it to be disengaged, all without even the slightest let-up in power transfer. And the same applies while going down through the gears, so the engine braking effect torque is also seamlessly applied. Yamaha’s patent also says its system allows seamless power-off upshifts and power-on downshifts.

If, as seems likely, this seamless transmission makes it into production on the next-generation R1, it promises to be a significant step forward even compared to the quickshifters of the current crop of superbikes. 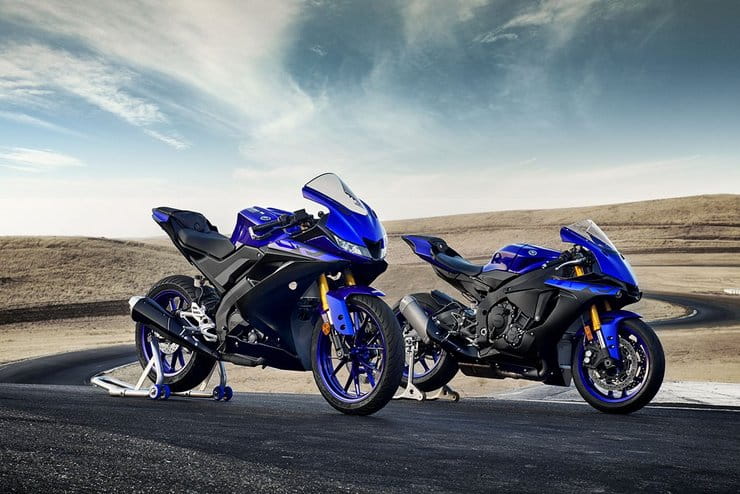 BMW’s 2019 S1000RR might be the first superbike to adopt variable valve timing and lift but the Euro 5 emissions laws coming in 2020/21 mean we’re going to be seeing a lot more of them.

We already know Honda has its own VVT/VVL system under development for a future generation of Fireblade, and when we spoke to the engine design experts at global engineering firm Ricardo earlier this year, they called its adoption for future superbikes like the next-gen R1 ‘a no-brainer.’ Basically, to meet the future emissions limits while simultaneously increasing performance, variable valve timing and lift is the obvious route to take.

Yamaha is well placed to do it, too. While BMW’s ShiftCam variable valve timing and lift has made headlines in recent months, bringing the technology to mainstream bikes including the R1250GS and S1000RR, Yamaha was actually there first. It’s been offering variable valve tech on its NMAX scooter since 2016, following it with the Asian-market R15 single cylinder sports bike in 2017 and the European R125 in 2019. Yamaha has also filed several patents for variable valve timing and lift systems for DOHC four-cylinder engines like the R1’s over the years.

Like the BMW and Honda designs, Yamaha’s VVT/L has two sets of cam lobes – one for low revs, with less lift and overlap, and another for high revs with more lift, duration and overlap to give a combination of low-down torque, high-rev power and emissions compliance throughout. This puts it a nose ahead of cam-phasing VVT system like the one on Suzuki’s GSX-R1000, which can alter the valve timing and overlap but not the valve lift or duration. At the moment, we’ve only seen Yamaha employ the idea on single-cylinder, SOHC engines, and the R1 will be a DOHC four-cylinder, but the firm has the technology to do it.

All this tells us that the next-generation Yamaha R1, like the upcoming Honda Fireblade replacement, should be a significant step forward compared to the existing model, adding vastly to the bike’s technology and performance. And while it’s normally hard to predict exactly when new models will be introduced, the impending Euro 5 rules, combined with Yamaha’s normal update schedule, mean we can narrow it down to being 2020 or 2021 model. Given that the existing generation of R1 is now among the oldest unchanged superbikes on the market, it won’t be a surprise if Yamaha has the bike ready for launch at the big bike shows towards the end of this year.