Are police drivers and riders immune from prosecution? 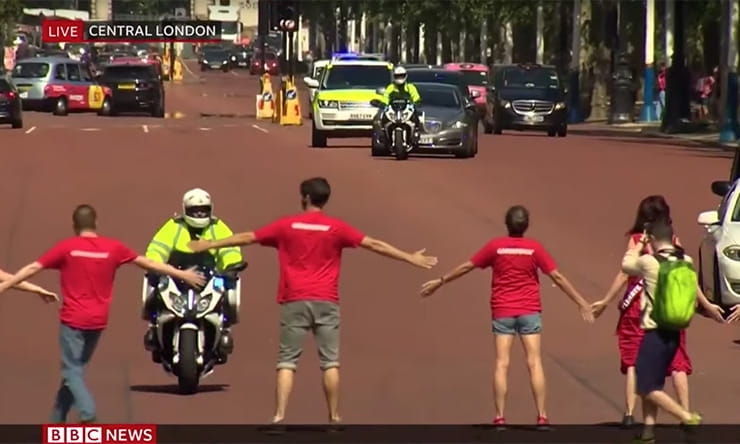 Protestors step out in front of police rider

On what at first looks like a different point, what’s your reaction when you see a motorcycle thief being knocked from the motorbike they’re riding by the Police? Satisfaction that the police are doing something about motorbike theft, or wary that it’s a slippery slope that could lead to motorcyclists being knocked off their machines for the smallest of traffic violations?

There are video’s being released by police forces that show suspects being rammed off bikes, or depending on your point of view, tactical contact being made. People receive serious injuries. The Metropolitan Police released some footage to show that it was fighting back against criminals using powered two wheelers (PTW), so why don’t the police do it more often?

All of these cases are linked by one thing; the possibility of the Police being involved in a collision where a member of the public is seriously injured or killed. Those incidents are referred to the Independent Office for Police Conduct (IOPC), which carries out its own investigation away from the police. Police riders and drivers are judged on the same level as a member of the public (or a competent and careful driver, to be more precise). So how did that happen ?

We have to go back to 18th March 2009 – long before the current theft and PTW-enabled crime crisis – and to a court case that had a huge impact on the way police officers drive cars and motorbikes. It revolved around whether a Police Sergeant had driven dangerously when he crashed a police car he was driving after being told he was no longer required at an incident. Continuing to drive at up to 120mph, the car spun out of control after hitting water at 113mph. It all ended up in court and the police officer was sentenced to five months imprisonment for dangerous driving.

Not a motorbike in sight, so how does all that effect you, me and bike crime, or police officers going about their jobs? Well, the sentence was quashed but – significantly – the Court of Appeal ruled that a Police Officer couldn’t take their enhanced training or special skills into account when defending a charge of dangerous driving.

Careless Driving is driving that falls below the standard of a competent and careful driver, and dangerous driving falls far below that standard. That Court of Appeal ruling became the courts guidelines, the standard at which all cases must be answered, so technically a police rider or driver exceeding the speed limit or deliberately making tactical could be found guilty of dangerous driving if the standard of driving fell below that of a ‘competent and careful driver’.

Fast forward to 2012 and the Director for Public Prosecutions (DPP) gave advice and guidelines to the Crown Prosecution Service (CPS) that said that it would be unlikely to be appropriate to proceed with a prosecution on public interest grounds if a police officer commits a driving offence while responding to an emergency call. When two Sussex Police officers stood trial accused of dangerous driving during a pursuit and the prosecution argued that they were responsible for the dangerous driving of the driver being pursued, the CPS was challenged because it wasn’t applying the DPP’s guidance. There was no crash, no one was injured and no members of the public complained (so who did complain?). The officers were acquitted, but is it any wonder that the Police are wary?

Armed with the knowledge that Police officers could be put on trial for dangerous driving and their training would mean nothing in court, it didn’t come as a surprise that criminals started to use motorcycles and scooters to commit crime. And why buy one when you can steal one, knowing you can ride around with impunity. The Metropolitan Police Force response wasn’t borne out of rising bike crime, but the grotesque numbers of other crimes being committed on a daily basis by criminals on powered two wheelers. Something had to change as the entire issue of police action was threatening to undermine public confidence in the police.

The proposed Government amendments to the definitions of Careless and Dangerous Driving should put a stop to lengthy Independent Office of Police Conduct investigations, which can blight Police officers’ lives for an average of 11 months. The amendments will mean that the training that Police officers receive in tactics will be taken into account, and for the first time the driving displayed by police when tactically knocking criminals from motorbikes will be judged against what a competent and careful police driver would have done. A subtle change, as it neatly circumvents the ruling by the Court of Appeal in 2009, without having to re-write the entire legislation.

It still means that all collisions where serious injury and death occur as a result of police contact will still be investigated properly, but there will be a benchmark for investigating officers and the public to start from. If an officer isn’t trained to drive in that manner, in those circumstances, or without the relevant authorities, they could still end up in court.It means that you won’t get knocked from your motorbike just because your MoT has run out because that wouldn’t fit the criteria for deployment of a tactic. You might get knocked off a bike if you’re part of a gang on stolen bikes carrying out robberies daily. By empowering police officers to do their jobs without fear, crime should fall, and the chances of your bike being stolen should also decrease. The focus of motorcycling should get back to what we all care about; enjoyment.

So there we have it; ten years since the Court of Appeal made a ruling that had an impact far beyond what was meant; seven years after the DPP gave its guidelines to the CPS; two years after the Minister of State announced a review of the law, we are just waiting for the Government to find time to debate the findings in Parliament and enable the new legislation.

Until it is passed though, Police Officers still aren’t fully protected when dealing with criminals on motorbikes.