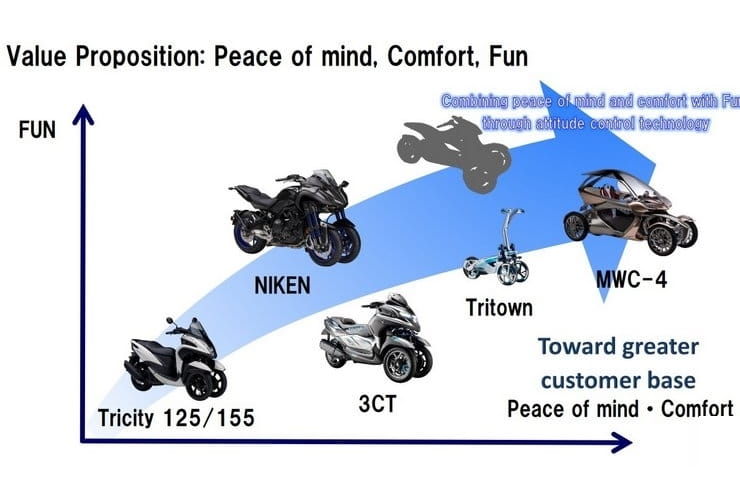 Yamaha’s ‘Leaning Multi-Wheel’ – or LMW – project might still be a curiosity but the firm is planning a fast-growing range with a sportier model waiting in the wings.

The firm’s medium-term business plan, which covers the years 2019-2021, shows that the range of tilting three wheelers (and, potentially, tilting four-wheelers) is likely to triple. And while we’ve already seen concept machines that represent three forthcoming models, the most interesting one hasn’t been revealed in any form yet.

At the moment, Yamaha has two LMW machines in the range. There’s the Tricity, a 125cc scooter that introduced the world to Yamaha’s tilting trike plans as a concept back in 2013, emerging as a production bike the following year. And of course there’s the MT-09-powered Niken, the first mass-made, high-powered tilting trike to hit the market. It initially appeared as the 01GEN concept in 2014, crept closer to production as the MWT-9 concept in 2015, was shown in final Niken form in 2017 and finally started reaching customers in the second half of last year.

The next new LMW will be a production version of the 3CT, which was shown as a prototype towards the end of 2018. Based on the powertrain of the XMAX 300, it’s very much at the practical end of Yamaha’s LMW line-up; a straightforward mid-sized scooter, but with three wheels instead of two.

NEW KIDS ON THE BLOCK

The next model, as indicated by the graphic above, is a much more interesting prospect. Shown only as a silhouette, it’s positioned higher on the ‘fun’ scale than any other model in the LMW line-up. While bikes can be slow and fun, we’d guess that this is a relatively high-performance model.

While the silhouette image may not be representative, it shows a bike with a small fairing and screen, but also with the front wheels positioned rather wider apart and further forward than Yamaha’s other three-wheelers. That suggests a different suspension and steering system, probably using car-style wishbones rather than the dual fork arrangement of the Tricity and Niken. Where could Yamaha get such a suspension system? The answer may well lie in the fact that in December 2017 Yamaha bought the patent rights to the Brudeli Leanster 654L and 625L – bikes with a similar layout to the silhouetted image seen here.

The silhouette also seems to suggest the bike might be electric. There’s no obvious place for a conventional petrol engine, but the full-length belly section is clearly visible – the obvious place to package batteries on an electric model.

Moving further into the future, the Yamaha infographic suggests that the Tritown and MWC-4 concepts – both shown in 2017 – are planned for production. The Tritown is a stand-up electric scooter, probably intended to be an alternative to an e-bicycle, with no need for a licence or insurance. The MWC-4 is at the other end of the scale, an alternative to a small car; a tilting four-wheeler with tandem seating for two and electric power backed-up by a petrol-powered, range-extending generator.

As the graphic shows, the LMW idea is intended to give customers more peace of mind and comfort than a conventional two-wheeled bike can offer, and Yamaha hopes that a wide range of such machines will boost its overall customer base, casting the net far wider than a traditional motorcycle range alone can manage. 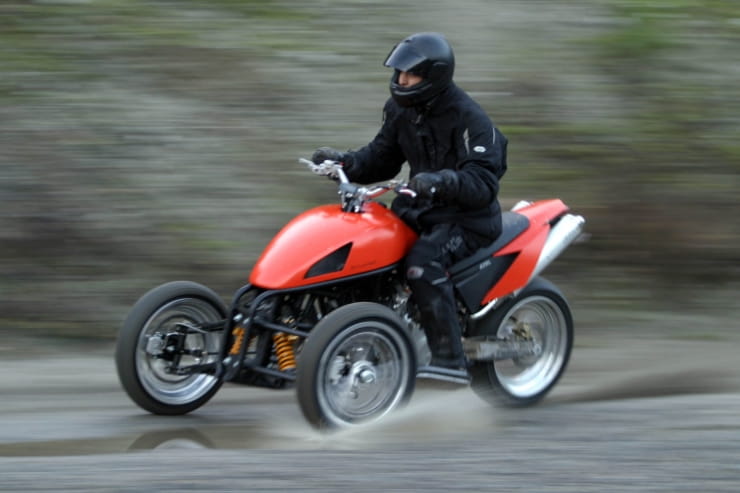 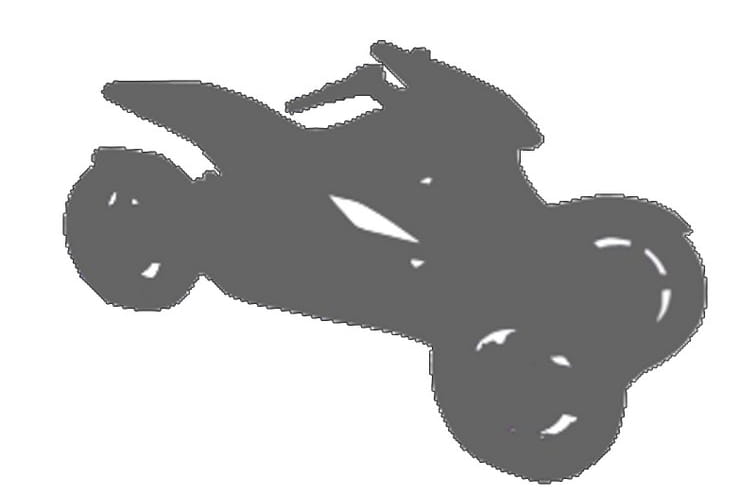 A new Yamaha newsletter, released this week, has added a little more flesh to the bones laid out in the medium-term plan. Specifically, it says that the expanding LMW range will play a ‘pivotal role’ in the firm’s future growth.

It also reveals that future LMWs – almost certainly including the silhouetted high-performance machine with the wide-spaced front wheels – will gain ‘attitude-control technology’.

That’s not a taming device for lippy teenagers, but a corporate-speak way of saying the tilting systems of these future machines will be computer-controlled rather than relying purely on physics and balance to keep the LMWs at the correct lean angle. The firm’s medium-term plan also mentions this – putting the self-balancing technology of its MOTOROiD and MOTOBOT self-riding ideas at the core of its ‘Peace of Mind and Comfort’ strategy to attract new buyers who might be scared off by conventional motorcycles. The MOTOROiD was a two-wheeled concept shown in late 2017, able to balance itself even when stationary, while the MOTOBOT is a riding robot that sits on an otherwise stock Yamaha R1 and is capable of lapping circuits at high speed with no human operator.

Yamaha says: “Yamaha will aim to expand the number of customers even further through the application of attitude-control technology, offering new value by realizing the goal of combining high levels of safety and stability with fun.”

While the medium-term plan and Yamaha’s latest newsletter agree that the Tritown and MWC-4 are likely candidates to bring this idea to customers, it doesn’t rule out yet more LMW models. Quite the opposite, in fact, it says: “In addition to these, the possibilities for new LMW machines is set to expand as Yamaha applies the concept to vehicles with various powertrains, from different engines and electric motors to electric power-assist systems, for the road, dirt and snow. Who knows what kind of new products this LMW development will lead to in three or maybe ten years.” 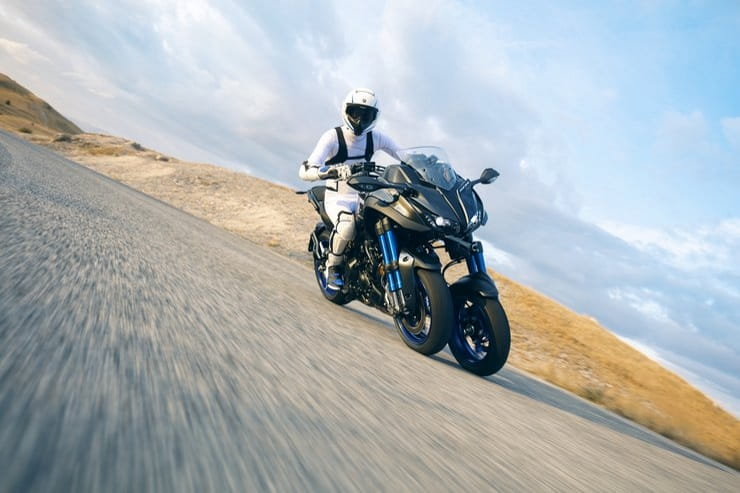 Yamaha is putting a huge stake into the LMW idea as one of the mainstays of its commitment to turn around its fortunes in developed markets – including Europe and the USA – which have been consistent loss-makers for more than a decade since the global financial crisis.

In a statement accompanying the reveal of its medium-term plan, the firm said: “We plan initiatives such as developing the LMW market and expanding sales of large motorcycles in developing markets, but we believe that a little more time will be required. We want to continue with the developed markets motorcycle business. It is an important business to us because it leads the development of new technology, it promotes the Yamaha brand carried by flagship models, and it has ripple effects such as facilitating sales of entry-level models in developing markets.”

That implies the firm’s tactic will be to move upmarket. Larger, more expensive bikes tend to have greater profit margins, and with the European market for sub-50cc mopeds haemorrhaging sales every year as their former riders turn instead to licence and insurance-dodging e-bicycles instead, it makes sense to double-down on the bigger models in the range. UK registration figures have shown that over the last decade, mopeds have dropped from over 17% of the market to less than 7%, with big rises in the 151cc-400cc market (up from 6.5% to 10.1%), 401-500cc (from 1.6% to 3.5%) and 801-1000cc (which dropped as low as 8% in 2012, but rebounded to 15% in 2017).

LMWs clearly offer a new avenue, attracting buyers who might be put off by the natural instability of a two-wheeled bike and comforted by the promise of much-improved front-end grip. It’s still too early to make judgements based on sales figures, but the Niken has proved that the tilting trike idea works just as well on a large-capacity sports-tourer as it does on scooters.