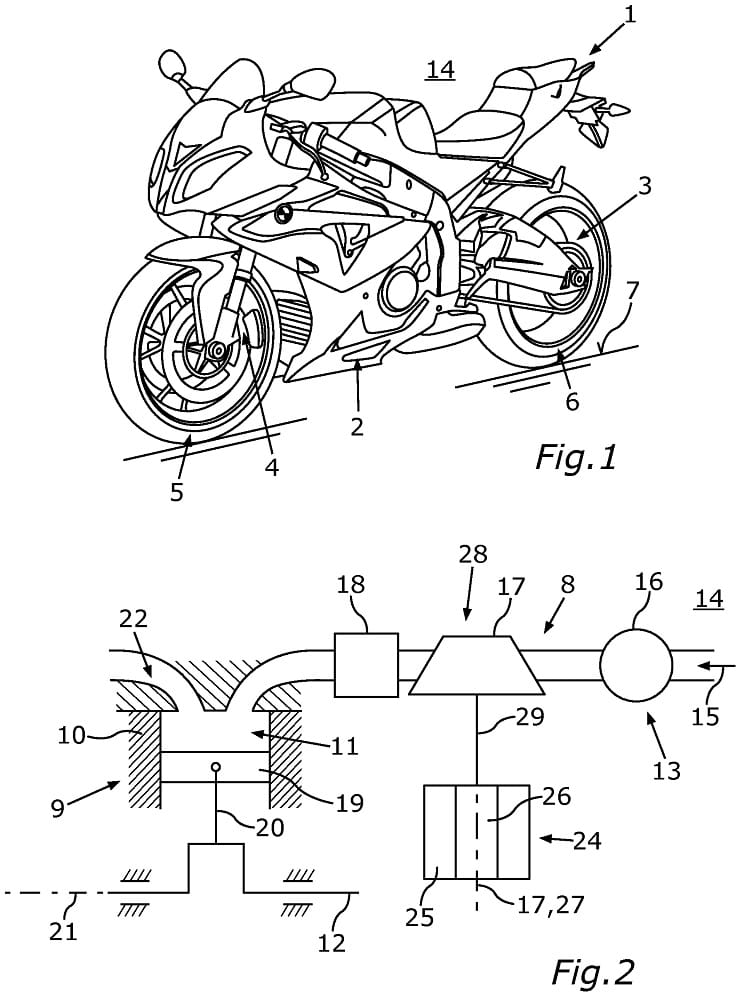 A German patent application titled ‘motorcycle with a supercharged internal combustion engine’ has revealed that BMW is developing an S1000RR-based superbike with an electric-powered supercharger.

The idea of electric superchargers isn’t a new one. In fact, it’s a technology that’s gained a bad rap thanks to cheap and ineffective bolt-on electric supercharger kits. But when done correctly, with a suitably powerful electric motor to drive the compressor, it’s an idea that actually offers potential advantages over both engine-driven superchargers (as used on Kawasaki’s H2) and exhaust-driven turbochargers.

Like an engine-driven supercharger, an electric supercharger doesn’t create a blockage in the exhaust system  like a turbocharger does, and the problem of turbo lag – a delay between applying throttle and getting power – shouldn’t occur.

In comparison to a mechanically-driven supercharger, which constantly saps engine power, the electric compressor relies on a small but powerful battery, or possibly super-capacitor technology, that can be charged when full performance isn’t needed. That means when the throttle is wide open and the supercharged is working flat-out, it won’t be absorbing any engine power.

The new patent document uses a rather simplistic illustration of the system (above), but shows the compressor (28), driven by an electric motor (24), pushing air into the combustion chamber (11) via an intercooler (18).

BMW’s patent suggests that the system could be a way to avoid the need for ever-higher revs, which is the traditional way to get more power from a small, normally-aspirated engine. Those high revs pose particular problems when it comes to keeping emissions low.

Will BMW actually make an electric supercharged S1000RR? It’s a bit early to be sure, but back in 2015 the firm patented the idea of a carbon-fibre framed S1000RR, something it officially launched 18 months later in the form of the HP4 Race. If the firm wants to create a similarly exotic technology demonstrator in the future, an electrically-supercharged version of the S1000RR would certainly grab plenty of headlines.