Suzuki Katana for 2019, but is it turbocharged? 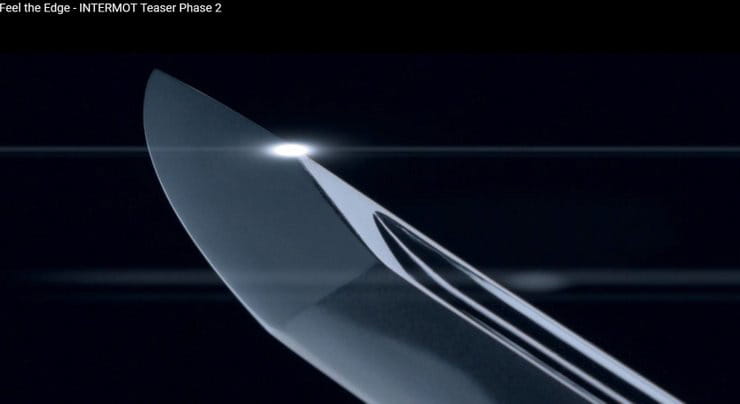 Suzuki is to unveil a new bike bearing the legendary Katana nametag in just a couple of weeks’ time at the Intermot show in Cologne.

So far, Suzuki has revealed two teaser videos on YouTube, each showing a blacksmith forging a sword, along with the text ‘Feel the Edge’ and a promise that the bike is coming to Intermot on 2nd October. You can see the first one here, and the second here.

In the initial video, while it was clear that there was a sword being made, it didn’t look much like a Japanese Katana. Suzuki has used other sword-inspired names before, after all – remember the Gladius? No?

Over and above that, Suzuki has recently renewed its Katana trademark rights in Europe and America. 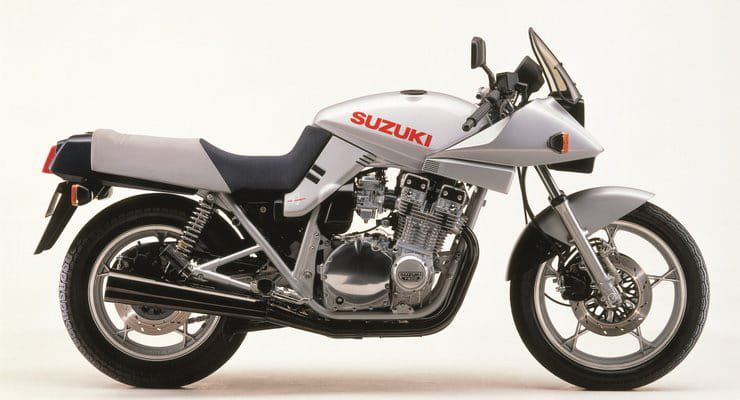 So we can be sure that the new bike will bring back the Katana name, but what sort of machine will it be?

At the moment, there are two leading theories. One is that the new Katana will be a retro-styled machine, harking back to the Hans Muth styled original that debuted as the ED1 prototype in 1979. The proponents of this theory believe that the mechanical elements of the new bike will be borrowed from the existing GSX-S1000 – a machine that can trace the roots of its engine back to the 2005 GSX-R1000 K5 model.

The alternative theory is that the 2019 Katana will be the production derivative of 2013’s Recursion concept bike. That machine had some Katana styling overtones, but was most notable for its turbocharged parallel twin engine.

Now let’s examine the case for each theorem… 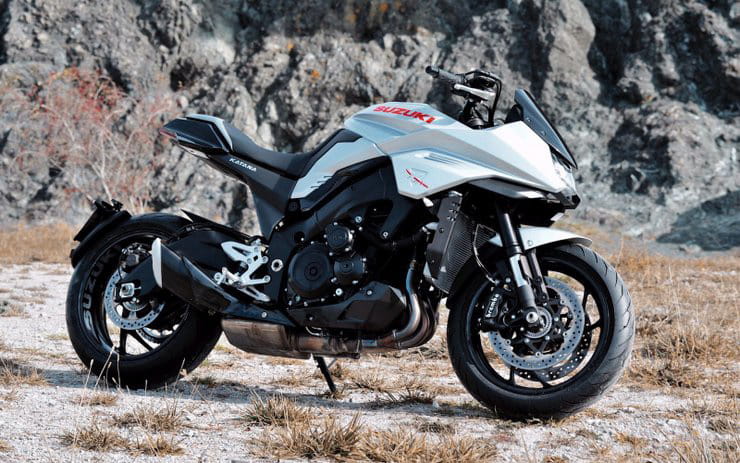 The case for the GSX-S1000-based machine

The idea that Suzuki will make a GSX-S1000-derived Katana clearly comes from one root – the Katana 3.0 concept bike that was shown at last year’s EICMA show in Milan.

Surely, goes the argument, a Katana-branded concept must be a preview of a production model? Not so fast.

The Katana 3.0 concept was indeed derived from the GSX-S1000. In fact it was a stock GSX-S with a redesigned body. But it wasn’t the work of Suzuki. Instead it was commissioned by Italian motorcycle magazine Motociclismo.

If the real 2019 Katana comes from that magazine-created concept, there would be some eerie similarities to the birth of the original Katana back in the 1970s. Back then, Target Design, founded by ex-BMW designers Hans-Georg Kasten, Jan Fellstrom and Hans Muth, was contracted German bike mag Motorrad to style a bike of the future. While they used an MV Agusta as the basis for the original design, it caught the eye of Suzuki – desperate to revive its flagging image – which then called on Target Design to restyle its existing, ugly GSX1100. Hence the Katana was born.

History would be repeating itself if the current GSX-S1000 – itself certainly no looker – was restyled by European designers to become a new Katana.

But let’s temper this romantic notion for a moment. Suzuki itself had little or nothing to do with last year’s Katana 3.0 concept bike. Moreover, as a largely unfaired bike based on existing GSX-S1000 mechanical components, it could surely be launched only as a replacement for the GSX-S1000. After all, who would buy the stylistically-challenged original if there was a gorgeous Katana alternative with the same abilities?

We already know that an unchanged GSX-S1000 has been type-approved in America for Suzuki’s 2019 model range, so is there really scope for a mechanically-identical Katana in the line-up? We suspect not. 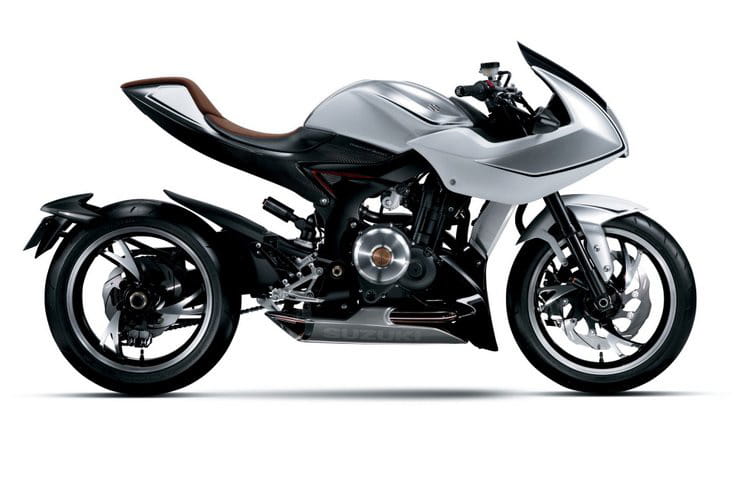 The case for a turbocharged twin-cylinder Katana

Perhaps the smoking gun that shoots the idea of a GSX-S1000-based Katana is Suzuki’s own description on its YouTube teaser videos. It says: “On 2nd October, completely new category and brand new bike will be born…”

Could a retro Katana based on an existing model really be given that tagline? Even in marketing-speak it would be pushing the bounds of reality to call a retro-inspired inline four ‘a completely new category’, and it certainly wouldn’t be a ‘brand new bike.’

You know what would be new? A turbocharged parallel twin sports bike. That’s never been done before, and Suzuki is certainly in a position to bring just such a machine to the market.

Suzuki debuted the idea as the Recursion concept at the 2013 Tokyo Motor Show, and pushed on two years later when it showed the XE7 turbo motorcycle engine at the 2015 edition of the same event.

Where the original Recursion was a 588cc SOHC twin intended to make about 100hp, the XE7 engine was a new design, with double overhead cams and a 700cc capacity. No power was quoted but surely something nearer 150hp would be realistic. The XE7 was also more compact, with an intercooler mounted next to the airbox instead of under the seat, where the Recursion’s was.

What’s more, over the last five years Suzuki has filed literally dozens of patents regarding its turbo twin design. They consistently show a bike built around the DOHC XE7 engine, using a trellis frame instead of the Recursion’s alloy beam chassis, and bearing Recursion-like, Katana-inspired styling. You can read about some of those patents here and here.

In terms of evidence, the case for the new Katana being a turbocharged, Recursion-derived two-cylinder, is a hugely strong one and much more convincing than the more recent idea that the firm will make a GSX-S1000-based bike to bear the name. 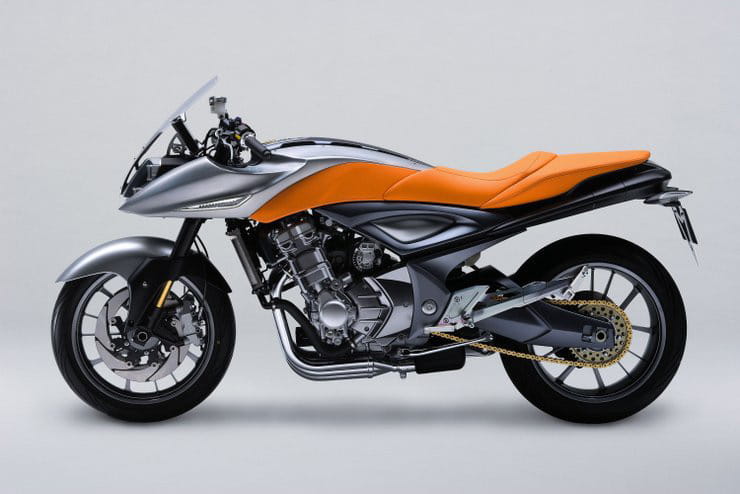 There is a third route that has been hinted at before, too, although it’s not reared its head among the latest rumours. It’s the Suzuki Stratosphere concept bike.

Revealed at the 2005 Tokyo Motor Show, the Stratosphere was a running concept bike that clearly took its inspiration from the Katana but was notable mainly for its six-cylinder engine. This was before BMW created the K1600, of course, and the world hadn’t seen a straight-six bike since the days of the Honda CBX1100, Kawasaki Z1300 and Benelli Sei.

For a little while it looked like the Stratosphere might have a future; Suzuki revealed videos of it running to show that it was more than a mere mock-up, and it proved that even 13 years ago there was interest in reviving the Katana style. But the financial crash of 2008 slammed the door on any prospect of the bike reaching production – it would have been an enormously expensive machine.

Could it be revived now? In a word, no. Or at least, it’s very unlikely. The idea of a high-revving six-cylinder engine goes against the demands of the latest exhaust emissions rules, and the bike would again be enormously expensive. Bear in mind, too, that Suzuki has been burnt before when it bowed to pressure to turn a concept into a production bike; it did it with the B-King, only to find that the public that had clamoured for a showroom version of that concept bike was nowhere to be seen when it came to actually buying the things…

Yes, the Stratosphere would be a lovely way to revive the Katana name, but it’s surely not something that’s on Suzuki’s radar.