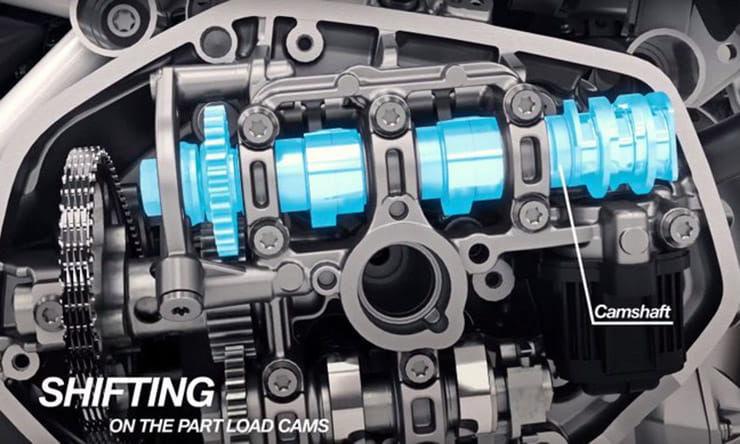 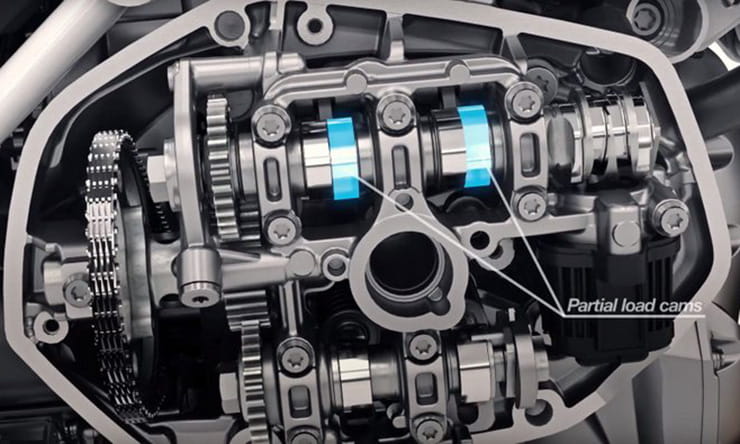 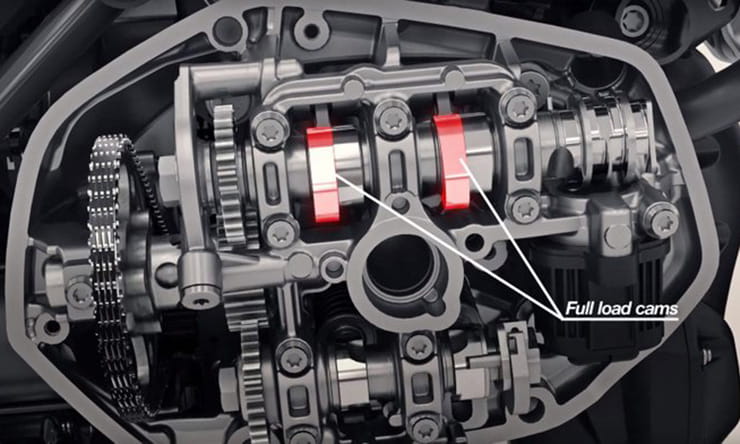 We’ve known it was coming for a while but BMW has released a video that reveals the inner workings of its new variable valve timing, 1254cc boxer engine – and shows the 2019 R1250GS that it will be fitted to.

The engine promises to combine the power and response of a high-performance motor, with aggressive high-lift cams, and the docility, economy and emissions of an engine with much softer cam profiles. How? By using two sets of cam lobes on the inlet camshafts.

The idea of employing two distinct cam lobe profiles in one engine isn’t new. Honda’s VTEC system – the one it uses in its cars, not the VFR800’s similarly-named but totally different Hyper VTEC – operates on the same basis and has been around for nearly 30 years.

While Honda uses a hydraulic system to engage or disengage followers that sit between the cam lobes and the valves to swap between its cam profiles, BMW’s solution is to physically shift the whole camshaft backwards or forwards to put the correct lobe above the valve stem.

The BMW’s boxer engine layout makes this system easier. With only one cylinder per camshaft, there’s a relatively significant time during each cycle where the intake cam lobes aren’t opening the valves, giving a moment to swap between cam profiles before it’s needed again. On an inline multi-cylinder, the system would be harder, or even impossible, to employ.

The camshaft itself is moved by engaging one of two pins into a ‘shift gate’ that’s machined into the rear end of the camshaft. This incorporates a pair of spiral grooves, so when the corresponding stationary pin is moved into place, the camshaft shifts either forwards or backwards. From BMW’s video, it looks like these two pins are operated by solenoids.

BMW’s video puts the new engine’s power at 136hp and its torque at 143Nm, although we understand that the ‘136’ figure actually refers to metric horsepower (PS) rather than the fractionally larger imperial horsepower. In British terms, therefore, it would be 134.1hp, as we revealed last month.

Either way, it’s a significant increase over the current bike’s 125hp, and we understand the peak still arrives at the same 7750rpm. The torque increase, from 2018’s 125Nm to 143Nm, is bigger still.

Most of the increase isn’t down to the new valve system, though. Instead it’s because BMW has upped the engine’s capacity from 1170cc to 1254cc. It’s likely that the aggressive, high-lift cam profiles are actually quite similar to the current bike’s profile, with the new bit being the gentle, low-lift profiles boosting low-end torque, fuel economy and emissions. 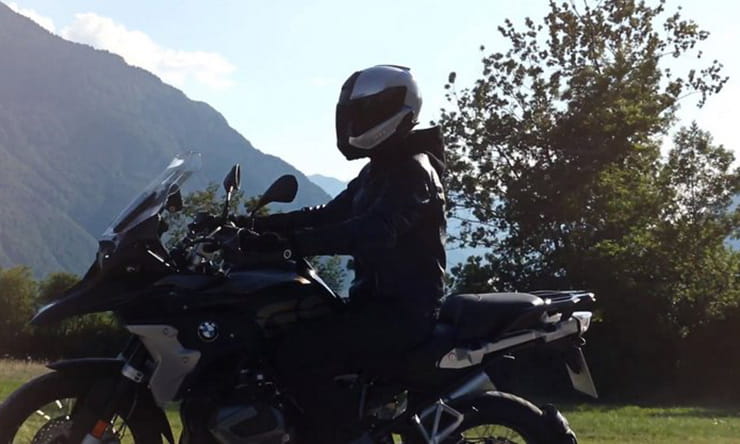 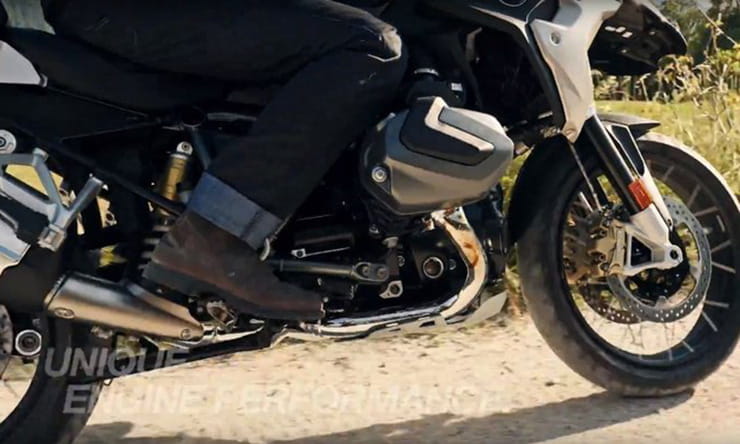 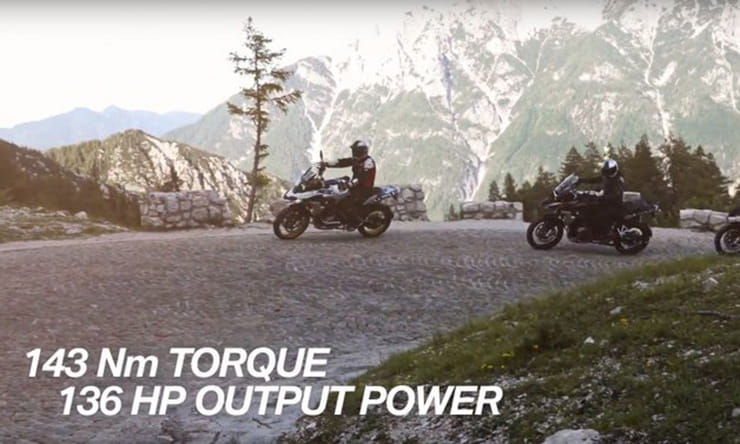 As well as revealing the new engine technology, the video shows our first glimpse of the 2019 R1250GS itself.

As we expected, the bike isn’t significantly changed. In fact, from the views seen here there aren’t any styling changes to the base model other than the new ‘R1250’ badge embossed into the metal-effect side fairing panel. The engine’s new cam covers are also a clear giveaway that it’s not the existing version. 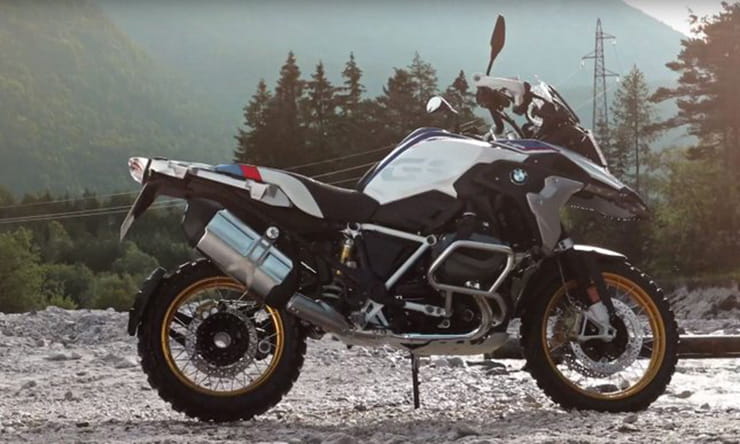 There does appear to be something new, though – an as-yet-unseen ‘HP’ version of the R1250GS (pictured above).

It’s styled more like the R1200GS Rallye, with that model’s side panels and wire wheels, and features BMW’s ‘HP’ paint scheme of white, blue and red, along with gold-coloured wheel rims and engine guards.

It also appears to have a wider ‘beak’ reminiscent of the one used on the R1200GS Adventure, with black plastic extending it on each side. And glimpses of the front show a sloping, clear panel over the headlight lenses, promising some protection and perhaps an aerodynamic improvement. Similar designs are already widely available on the aftermarket for existing GSes.