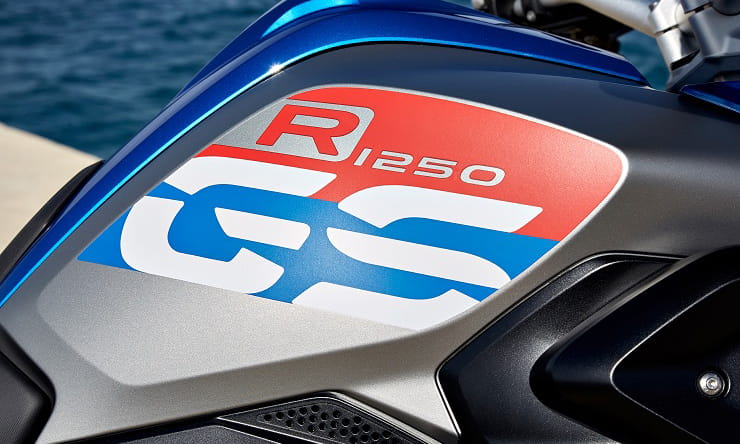 BMW’s R1200GS and R1200GS Adventure have stayed unshakably at the top of sales charts in the UK and much of Europe for years – and with the biggest update in years coming for 2019 they’re set to cement itself even more firmly in that position.

We’ve known for a while that next year’s GS will be an enlarged ‘R1250GS’ and now we’ve finally got concrete evidence of the changes thanks to a leaked set of technical specifications covering both the base-level R1250GS and the higher-spec R1250GS Adventure.

Ever since the 1170cc R1200GS appeared in 2004, replacing the 1130cc R1150GS, the adventure bike market has been on a surge and the big BMW has been its undisputed king. Updates over the years have improved it in every respect, most notably in 2013 when the GS gained a water-cooled engine, complete with a new chassis and styling to wrap around it. But the essential recipe has remained the same; thumping boxer twin, Paralever shaft-drive rear end, Telelever front suspension, lopsided headlights and, of course, the trademark beak at the front.

Unsurprisingly, BMW isn’t about to mess too much with a bike that’s proved such an enormous success,  but it is continuing the process of gradual improvement and in 2019 the big change is given away in its name: R1250GS.

We now got 100% confirmation that this is going to be the new bike’s name; but the actual capacity increase is rather more than the 50cc that it implies. Where the existing liquid-cooled GS engine is actually 1170cc, the 2019 bike’s engine has a 1254cc capacity; an increase of 84cc.

The 2019 R1250GS still reaches its peak power at the same 7750rpm as the R1200GS, but is sure to have a fatter torque curve, thanks in part to its extra capacity but potentially boosted further by the rumoured addition of variable valve timing. The simple sheet of figures that BikeSocial has seen doesn’t reveal whether the VVT rumours are true, but spy shots of a prototype 2019 engine show that the cylinder heads are notably different to the current model, suggesting that there could be some trickery within them.

You might have thought that BMW would accompany this bigger, revamped engine with a completely redesigned chassis and bodywork, but the indications are that the firm is pursuing a tactic of incremental improvements rather than radical change.

The figures we’ve seen reveal that in terms of its essential dimensions, the 2019 R1250GS isn’t changing much compared to the current bike.

At the moment, the normal R1200GS has a wheelbase of 1507mm, and according to the accurate specifications we’ve seen, the 2019 model’s figure is a near-identical 1500mm. The Adventure version has a fractionally longer 1520mm wheelbase, which is the same as the current model.

Those figures suggest the chassis isn’t being altered significantly, and it appears that the styling also won’t change much. The overall length of the base model isn’t changing at all – the 2019 R1250GS will be 2207mm long, exactly the same as the 2018 R1200GS – while the 2019 R1250GS Adventure comes in at 2270mm, just 15mm longer than the current R1200GS Adventure.

Those figures strongly suggest that the styling won’t change a lot. While the new R1250GS and GS Adventure might get tweaks to the headlights and some of the plastic body panels, the unaltered dimensions hint that they won’t be significant ones.

Apart from the notably increased power and capacity, the biggest changes on the 2019 spec sheet are to the bikes’ weights and sound levels.

Next year’s machines will be significantly quieter than the current ones, with decibel levels dropping from 92dB to a mere 88dB. That indicates a new exhaust system at the very least, although the changes to the cylinder head and cam covers could also be muffling mechanical noises from the engine.

Weight-wise, both the R1250GS and the Adventure pick up 5kg compared to the 2018 R1200 versions. That means the basic GS’s curb weight, complete with a full tank of fuel, rises from 244kg to 249kg, while the R1250GS Adventure is upped from 263kg to 268kg, again with fuel (its larger 30 litre tank – compared to 20 litres for the normal GS – accounts for much of the increase over the non-Adventure version). What’s adding that 5kg? Well, some of it is likely to be in the new exhaust system and, of course, the expected variable valve timing system.

Interestingly, despite the significant power increase, the R1250GS won’t get a higher top speed than the current model. According to the figures we’ve seen the R1250GS will achieve 136mph and the Adventure will top out at 132mph, unaltered from the existing bikes. That suggests the gearing isn’t being altered for the updated engine. It’s good news, really, since an increased final drive ratio would dull the additional acceleration promised by the torquier, more powerful 1254cc engine.

There’s still a bit of a wait before we see the final R1250GS; BMW is expected to show the bike, along with a new R1250RT using the same engine, at Intermot in Cologne at the start of October.

Looking to insure your pride and joy? Take a look at Bennetts motorcycle insurance, and our specialist classic bike insurance.