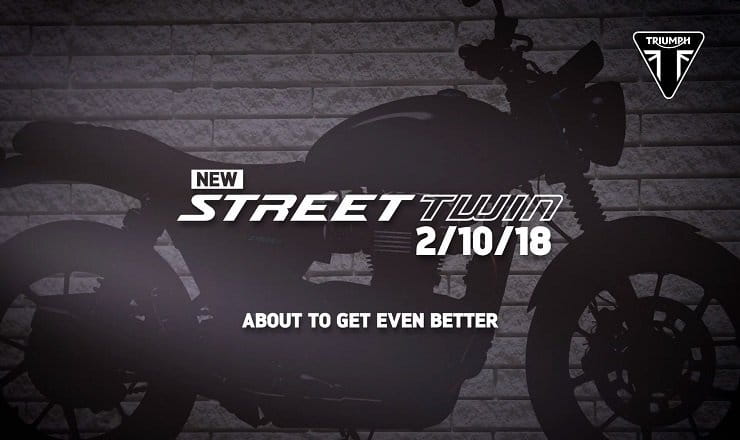 Triumph’s model range for 2019 is getting ever clearer as the firm has unleashed a barrage of new teaser videos.

The latest tempters kick off with the third of a series of vids for the upcoming Scrambler 1200, a high-spec machine that’s already been spied in near-finished form. The new video – which you can see here – suggests that this Scrambler will have real dirt-road abilities, promising a “thumping high power engine”, “fully adjustable long travel suspension”, “class leading equipment” and “properly useful technology” – whatever that might mean.

But of course, we knew about that bike already. The next two teaser videos reveal models that weren’t so widely expected; a new Street Twin and a new Street Scrambler.

Neither video actually shows much of the bike in question. The Street Twin promises “more fun”, “more performance” and “more style” while showing a silhouette of a bike that looks pretty much the same as the current one.

The Street Scrambler video shows even less of the new bike, and only promises that it’s “about to get even better” than today’s model. Since the two Street models are based on the same mechanical bits, chances are that the 900cc engine they share has been updated. 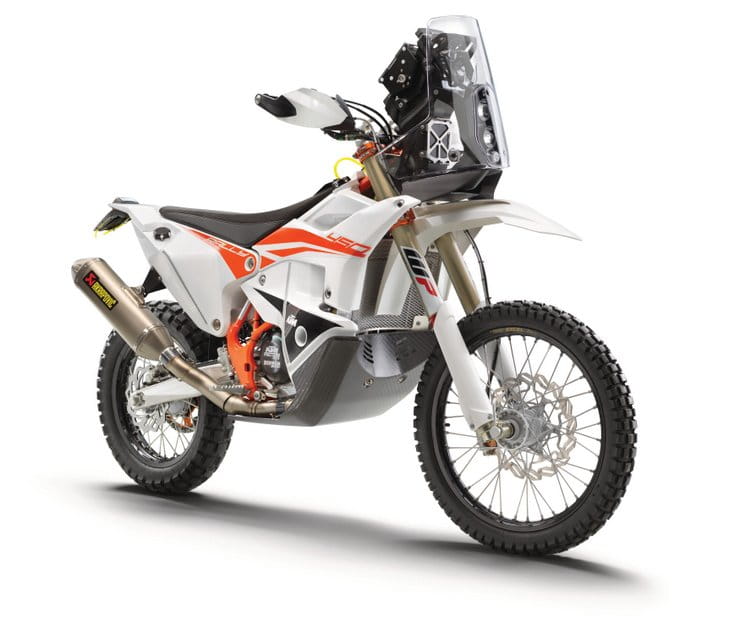 KTM’s 450 Rally Replica is about as close to a full-on Dakar race bike as you can buy off-the-shelf, and for 2019 it’s been uprated and updated.

The Austrian firm says that it’s a new design from the ground up, with changes incorporated following its 2018 Dakar win.

A new air filter box offers more room for the electrics and battery whilst also enhancing the centralisation of masses – a key point in the development of this new machine. The 2019 KTM 450 Rally Replica enjoys a brand-new chassis, tested and developed with factory riders for the perils and style of Dakar we have seen in recent years, as it combines improved agility with enhanced stability for braking, whilst retaining the incredible straight-line stability that the KTM rally machines are renowned for.

A new swingarm in conjunction with a reworked linkage and shock absorber, along with WP XACT PRO 48mm closed cartridge suspension with sophisticated Cone Valve technology, provides improved traction when accelerating, as well as increased bottoming reserves. New bodywork utilises sophisticated aerodynamics to increase rider comfort while improving the visibility past the innovative carbon tower, which houses the navigational elements of the bike, to the front wheel. A new, softer seat, revised fuel tanks, and new Akrapovič exhaust, which also contribute to mass centralisation and improved weight distribution, reiterate the design goal of a lightweight, agile, comfortable and stable bike.

Motorcycle Live at the NEC this November will introduce its first ever ‘BSB Day’ to celebrate the Bennetts British Superbike Championship.

Saturday 24 November is the day to aim for if you want to catch the event, which will see James Whitham hosting a Q&A with BSB riders on the Blackhorse Stage in the Eurosport Entertainment Zone.

According to the organisers: Audience members will be able to submit their own questions for the riders on the day via the #AskWhitham hashtag and could also be in with a chance of winning one of four pairs of season tickets for the 2019 Bennetts British Superbike Championship. The ever-popular Question of Bikes quiz, hosted by Steve Parrish, will be all about seasons, teams and riders past and present.

The Bennetts British Superbike Championship will also host its own stand within the Motorcycle Live halls throughout the nine-day event, giving show visitors the chance to get even closer to the stars of the series with rider signings and appearances.

“We’re really pleased to join forces with the Bennetts British Superbike Championship, to host what looks set to be a fantastic addition to the Motorcycle Live line-up”, said the show’s managing director Finlay McAllan. “We always celebrate the championship at the show, welcoming the riders with open arms and including BSB content in our stage schedule, but this is the first time we’ll be hosting an official BSB Day. It’s exciting for everyone involved, not least the show visitors.” 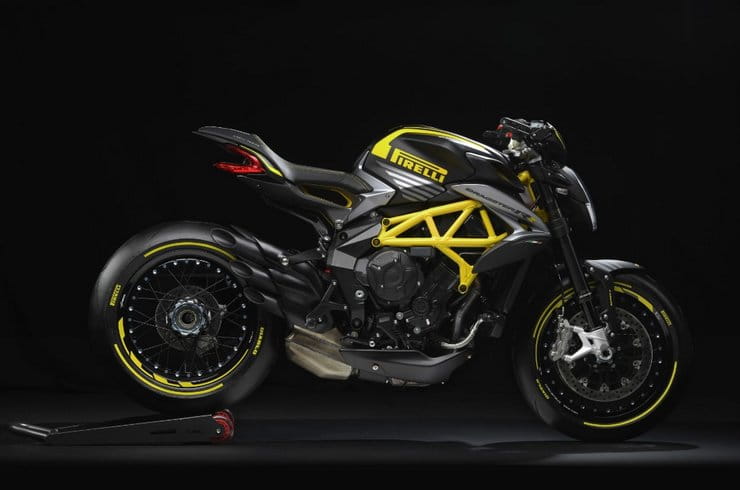 MV Agusta is a firm that’s no stranger to limited-edition specials and its latest is a Dragster 800RR created as a tie-in with Pirelli.

It’s not the first time this has happened. Last year MV created a limited-run Brutale 800RR Pirelli, and the new Dragster uses the same formula. You can even specify it with coloured sidewalls in yellow or blue to match your bike, albeit at extra cost.

Here’s how MV explains it: For the first time Pirelli Design, born as an incubator of high-end projects with the aim of enhancing technological know-how, high performance standards and the unique glamour inherent in the Pirelli brand not only personalises the look of the bike containing two different colour combinations - the first more gritty black and yellow, the second most elegant white and blue - but has also taken care to enhance functional aspects of the bike. In fact, the tank slider and the fairing are made of rubber specially formulated by Pirelli’s Research and Development department to ensure superior resistance to scratches and rubbing to which these items are subject, as well as to atmospheric and chemical agents, such as the fuel. Both rubber elements are recognisable thanks to the iconic "flash" symbol that distinguishes the tyres of the DIABLO range, including the DIABLO Supercorsa SP that equip this model in 120/70 ZR17 front and 200/55 ZR17 rear with a 6" rim.

The seat was created ad hoc by the Castiglioni Research Centre to make this creation even more exclusive. It stands out for its double texture with contrasting stitching and for the distinctive "flash" of the DIABLO embroidered to embellish the tail unit signed by Pirelli Design. Particularly refined is also the finish of the exhaust silencer terminals, obtained through the application of a special ceramic-based paint, resistant to very high temperatures.

The colours conceived by specialists from the Castiglioni Research Centre and by Pirelli Design aim to enhance the lines of the "Dragster 800 RR PIRELLI". To underline this exclusive partnership, the first proposal includes a matte black base, with glossy inserts painted in yellow to recapture the Pirelli institutional colours. A yellow logo is also for the Pirelli brand on the sides of the tank, as well as for the DIABLO logo, which identifies the range of high-performance Pirelli tyres. The second colour is centred on a glossy white base with blue inserts.

To unequivocally identify the bike as a result of the collaboration between MV Agusta and Pirelli, it is possible to purchase, as an exclusive option, DIABLO Supercorsa SP tyres with coloured sides, respectively with yellow or blue stripes, depending on the version to which they are combined. 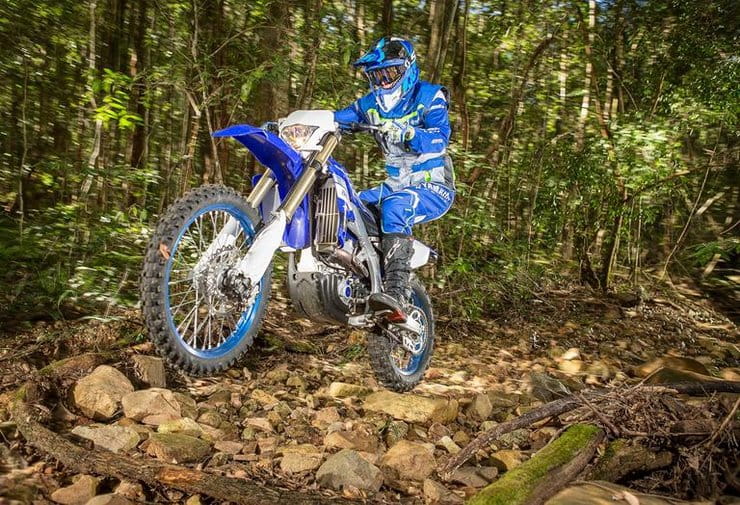 Yamaha’s WR450F enduro was revealed in Australia on Thursday, before making its European debut at next week’s Intermot show in Cologne.

The off-road-only machine, which won’t be homologated for road use in Europe despite having a headlight and taillight, is – unsurprisingly – said to be more agile and more powerful than its predecessor.

Based around the reverse cylinder head engine from the YF450F motocrosser, the WR features similar tech but gains its own unique injection and ignition mapping to suit enduro riding. On-board WiFi means it can be tuned for particular tracks and conditions via Yamaha’s Power Tuner smartphone app, altering fuelling and ignition and downloading datalogging from the bike.

On top of that, there’s a bar-mounted engine mode switch, allowing you to swap between two pre-programmed maps on the fly.

Yamaha says that the bike’s frame, derived from that of the YZ450F, is new and gives lighter handling. Suspension is from the YZ450F, but with tweaked settings, while the fuel tank is a larger 7.9 litre unit and the bodywork is revamped for 2019.