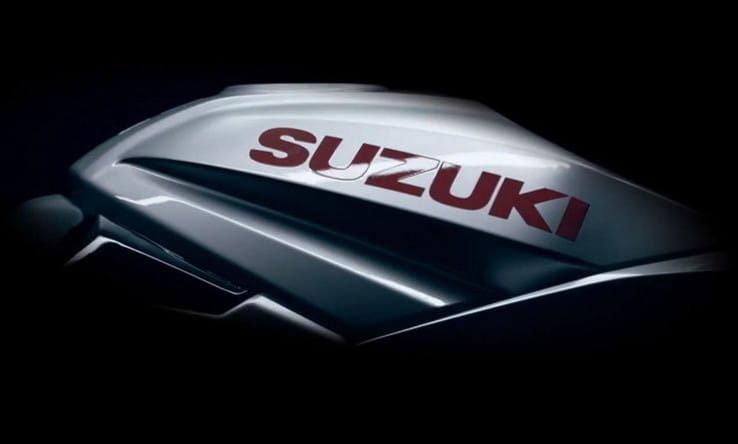 There’s no question now that the new Suzuki that been the subject of three teaser videos over the last few weeks will revive the Katana name – and in the latest vid the firm has given us our first taste of the bike itself.

The first two teasers just showed a sword being forged, along with the slogan ‘Feel the Edge’, but the latest one clearly shows a finished Japanese Katana sword and cuts in to a close up of a bike’s fuel tank. While it bears only the Suzuki logo, the styling is a clear reference to the original Katana of 1981.

In fact, the tank appears to be identical to that of the Suzuki Katana 3.0 concept bike that appeared at the EICMA show in Milan last November. That’s odd, since the Katana 3.0 wasn’t an official Suzuki project. Instead it was a collaboration between Motociclismo magazine and R&D firm Engines Engineering. Basically, it was a restyled version of the existing GSX-S1000, using the stock production bike’s engine and chassis but adding Katana-style bodywork.

Does that mean the 2019 Katana will simply be a production version of the Katana 3.0? We’re reserving judgement just at the moment. After all, a restyled GSX-S1000 doesn’t really fulfil the promise, made in the description of Suzuki’s YouTube teaser videos, that “On 2nd October, a completely new category and brand new bike will be born.”

Suzuki has also launched a website specifically dedicated to the machine that will clearly be the main thrust of its new model launches at the Cologne Intermot show on 2nd October. You can find it, and see the latest teaser video, here. 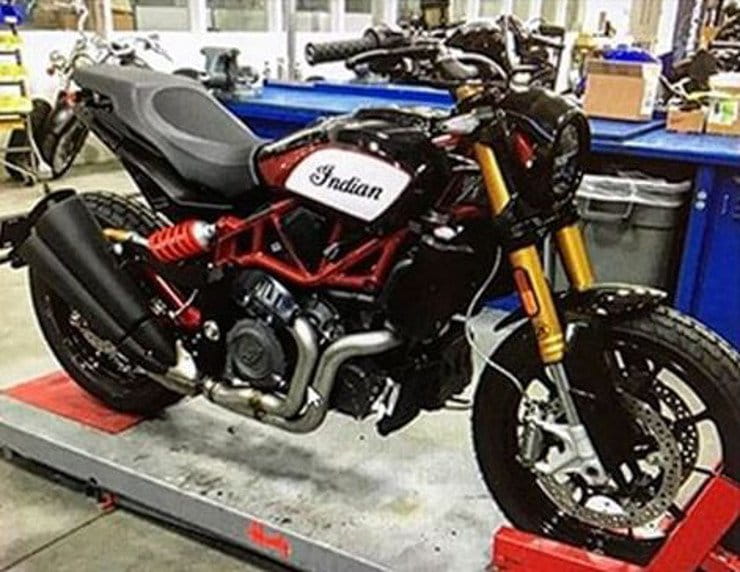 Indian’s upcoming FTR1200 production bike – a spin-off from the concept shown last year – has already been confirmed as part of the company’s 2019 line-up and now a photo of the machine has leaked onto the internet.

While the official launch is expected to take place at Intermot on 2nd October, the low-res picture that’s appeared on social media closely matches genuine patents for the new bike, so there’s little doubt that it’s the real deal.

So, what can we see?

Well, the red, trellis style frame takes its cues from the FTR1200 concept but it’s a completely new, and much more rugged-looking, design. The concept’s high-mounted, flat-track-style exhausts are gone, replaced with a more convention system that allows a catalytic converter to be tucked under the engine. Expect the aftermarket to dive straight into that, offering high-level pipes that mimic the original concept.

The gold-coloured forks – Ohlins, perhaps? – and radial brake calipers hint at performance and handling that’s far beyond anything we’ve seen on an Indian before, while the rear shock is offset to the right on a swingarm that’s also from a tubular steel trellis like the main frame.

The patent, which also emerged this week, show that the FTR has a 13-litre plastic fuel tank that runs all the way under the seat, sitting on a subframe that appears to be cast aluminium.

Cast aluminium is also used for the swingarm pivot sections of the frame, and the battery is unconventionally placed on a tray underneath the radiator, just behind the front wheel. That might seem a bit vulnerable, but it means that the battery’s weight is held much lower down than on conventional designs that would place it under the seat.

The end of October might be getting a bit late in the biking season but it’s worth putting 27th October in your diary to visit National Motorcycle Museum Live.

It’s at the National Motorcycle Musuem, Birmingham – near the NEC and Birmingham Airport – and promises to bring the normally static displays to life with the help of various biking stars.

As well as appearances from racers including John McGuinness, Mick Grant, Steve Plater and Trevor Nation, you’ll be able to meet TV presenter Henry Cole, and Norton boss Stuart Garner will also be making an appearance.

The museum will also be starting a host of its classic bikes during the day, including the Honda RC163, RC181 and NSR500V, Yamaha GP machines including a ROC V4 two-stroke and an ex-Biaggi M1 four-stroke, MV and Benelli 500cc GP bikes, Steve Hislop’s white Norton rotary and a host of others.

And the price of all this? Nothing – it’s free. Can’t argue with that. See more, including a full timetable of events for the day, at the National Motorcycle Museum’s website here. 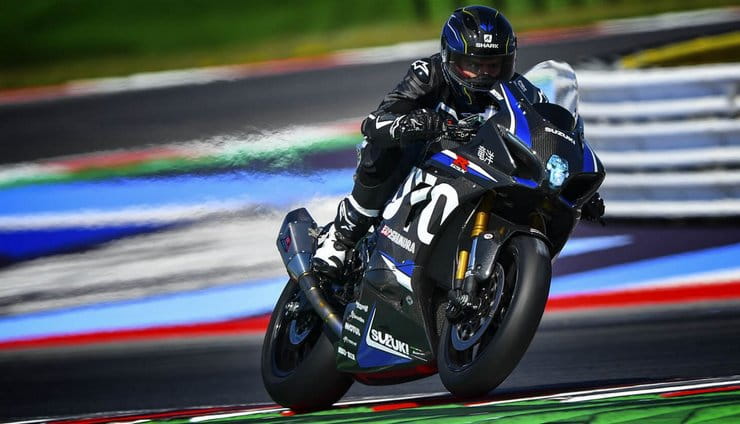 Set to be officially unveiled at the EICMA show in Italy this November, the Ryuyo is named after Suzuki’s own test track and is a completely carbon-clad GSX-R1000 that’s packed with high-end, race-style components.

Your money gets you a 212PS (209hp) output, thanks in part to a full Yoshimura titanium exhaust and control unit, a carbon race fairing and frame protectors, adjustable pegs, an Ohlins NIX30 cartridge kit in Showa BFF forks, an Ohlins TTX GP shock, plus an Ohlins steering damper, Brembo brakes including the master cylinders and levers, Ergal handlebars machined from solid aluminium, a CNC machined Bonamici Racing top yoke and MotoGP-style bar controls. Dunlop slicks hammer home the fact that this isn’t a bike for the road.

At the moment, the bike appears to be aimed at the Italian market – there’s an Italian-language website for it here. Oh, and they’re only going to make 20 of them. Form an orderly line, please. 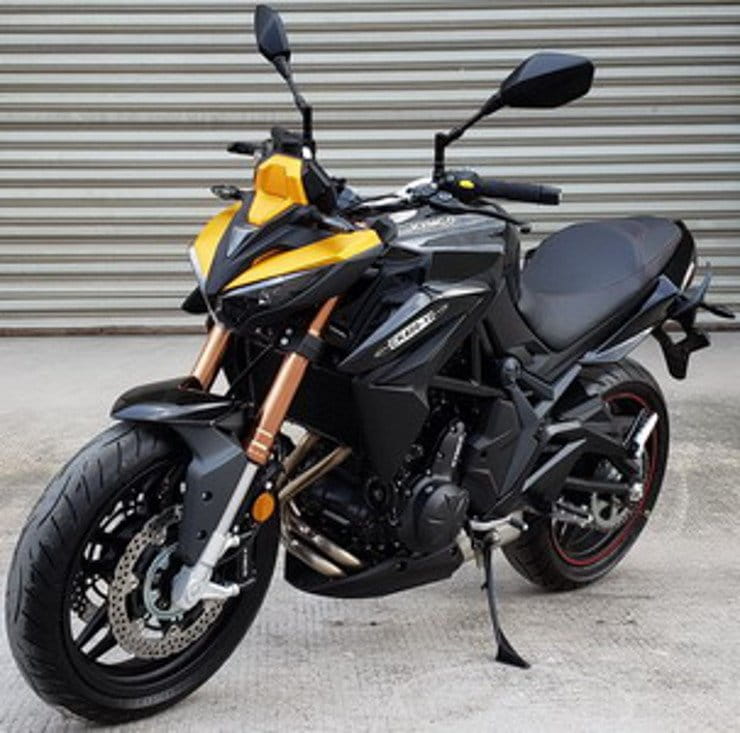 Remember the Kymco K-Rider concept bike? No? It was revealed two years ago – see our coverage here – and featured the engine from the Japanese market Kawasaki ER-4.

That’s basically a sleeved-down version of the ER-6/Ninja 650/Z650 parallel twin, rather than the newer 400cc twin from the Ninja 400. But it still manages a decent 43hp, and perhaps more importantly means that it’s a simple job to create a more European-friendly 650cc version by switching the 400cc motor for the outwardly-identical 650cc unit.

The bike was first shown as a concept in 2016 and appeared in near-production form again this year at the Shanghai show. Now, Chinese government documents show that it’s been certified for sale over there.

Whether we ever get to see such a bike over here remains to be seen, but the use of a Kawasaki engine is an interesting move that could catapult Kymco into immediate contention. It’s worth bearing in mind that Kawasaki’s own J300 and J125 scooters are reworked Kymco models, so there’s clearly a close relationship between the two companies.