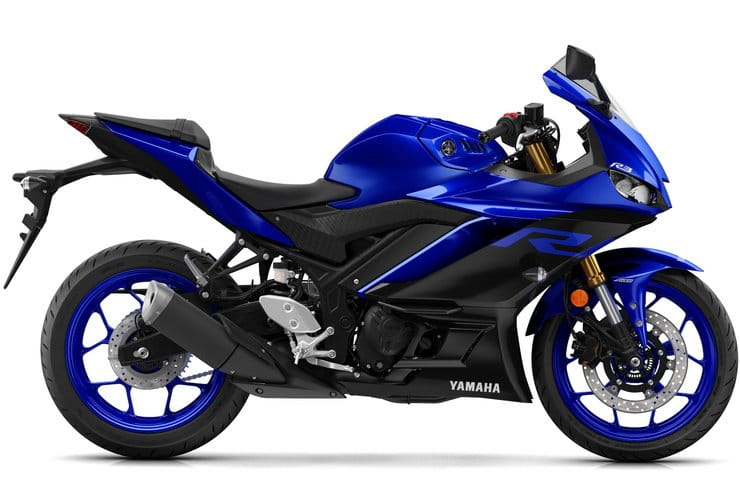 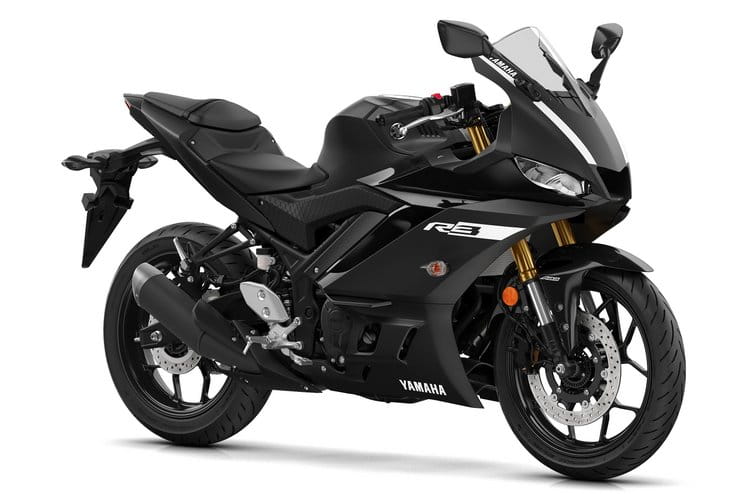 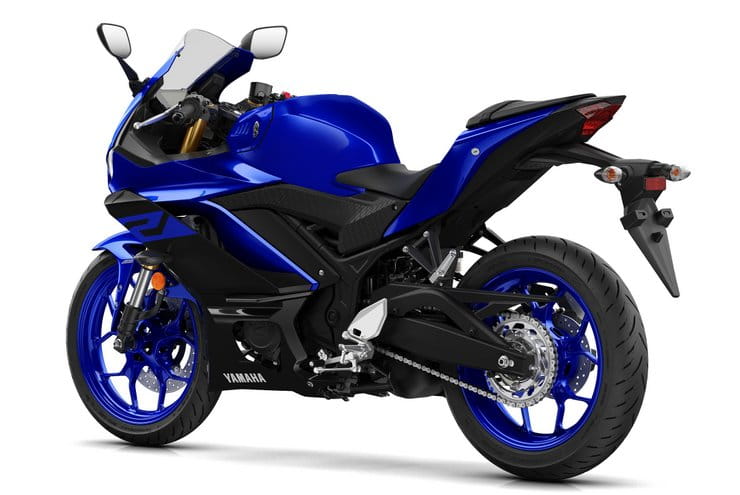 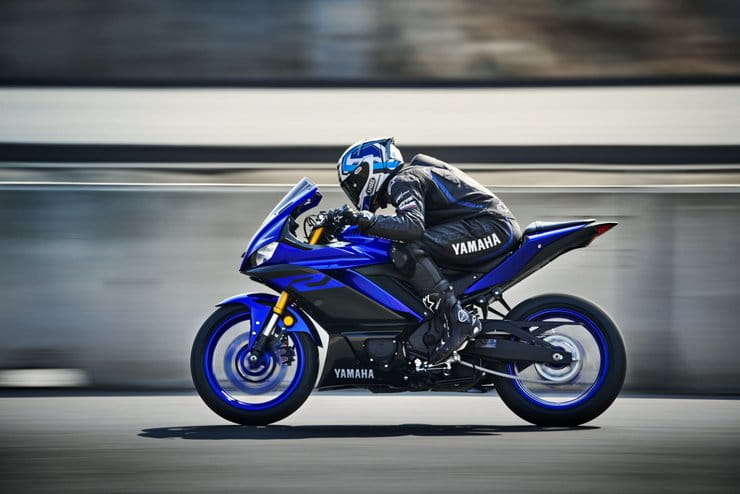 With the launch of the new-for-2019 Yamaha YZF-R125 a week ago, its bigger brother – the YZF-R3 – was suddenly left looking a little outdated and out-specified. But not for long; Yamaha has just whipped the covers off a re-engineered version that will have rivals like Kawasaki’s Ninja 400 worried.

Unveiled in America today, the new YZF-R3’s changes focus on the styling and suspension.

Let’s start with the former. The previous model R3 has long been something of an odd-man-out in Yamaha’s range when it comes to appearance. Its reverse-rake headlights might have been distinctive back in 2015, but with its closest rival, the new-for-2018 Kawasaki Ninja 400, adopting a similar style Yamaha has made the wise decision to move on.

The new look follows the conventional path of mimicking Yamaha’s MotoGP machine, the YZF-M1, and in doing so fits neatly in the range alongside the R1, the R6 and the newly-revamped R125. All of the YZF-R sports bikes now share a similar M1-inspired central nose intake flanked by a pair of lights, although the R125 and this new R3 use relatively conventional LED units instead of the hidden, projector-style lights of the R1 and R6.

While the nose intake is used to feed the airbox on higher-end R-series bikes, on the R3 it directs air into the radiator to improve cooling.

Moving back, the relatively minimalist side fairings of the original YZF-R3, which had a very slim bellypan and left much of the engine on show, have been replaced with more enveloping bodywork, although Yamaha has kept the ‘floating’ look of the side panels where they meet the nose. Above them, the fuel tank is redesigned and bears the distinctive gills that have always been present on the M1 GP bike.

That tank keeps the same 14 litre capacity as before, but measures 31.4mm wider and 20mm lower, in turn allowing the bars to be dropped by 22mm to let riders tuck in more completely. Allied to the new nose, which is claimed to reduce drag by 7%, this means the 2019 R3’s top speed is up by 5mph on the old model. 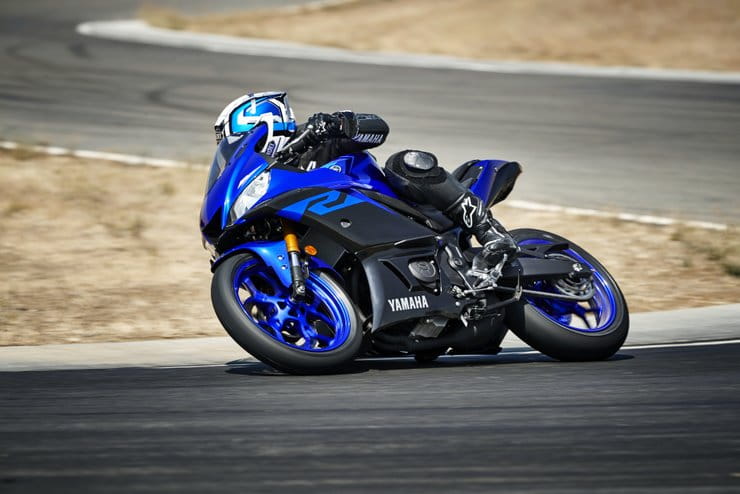 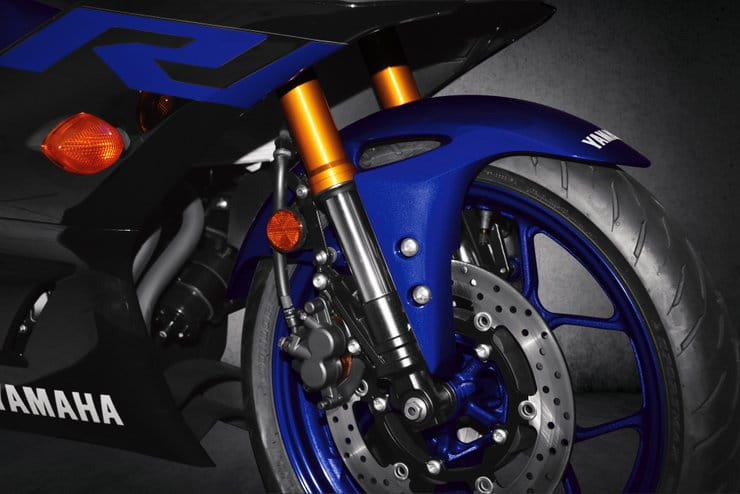 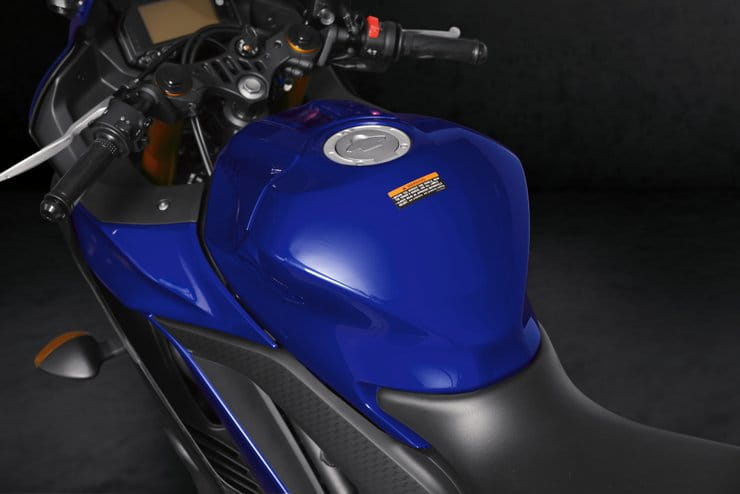 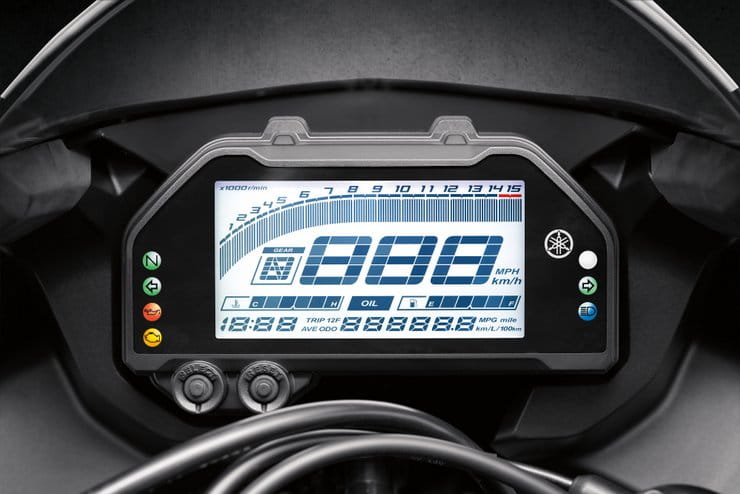 Mechanically, the biggest change to the YZF-R3 is the addition of inverted forks. The YZF-R125 gained similar upside-downers for 2019, so it would have seemed odd if Yamaha had left the cheaper-looking right-way-up forks on the R3.

Inverted forks offer certain ingrained advantages over traditional designs, in particular by reducing un-sprung weight and flex, and Yamaha says the 37mm Kayaba units on the new R3 give improved feel and feedback as well. At the top, there’s a new triple-clamp to hold them, too.

It’s a surprise to see that Yamaha hasn’t grabbed this opportunity to bolt a radial-mount front brake caliper to grip the single 298mm disc, particularly since even the new R125 uses a radial brake.

The frame is unaltered, and the swingarm and wheels are carried over from the existing bike. The same applies to the 321cc parallel twin engine, which is carried straight over from the previous YZF-R3. That means we get 42hp at 10,750rpm and 22lb-ft at 9,000rpm, and while it’s yet to be confirmed, the bike’s wet weight also won’t be far from the current model’s 169kg, ready-to-ride. In comparison the R3’s nearest rival, Kawasaki’s Ninja 400, manages 45hp at 10,000rpm and 28lb-ft at 8,000rpm from a larger 399cc twin, with a near-identical weight of 168kg.

The new R3 will make its European debut at the EICMA show in Milan at the start of November, and will also appear at the NEC Show later the same month.