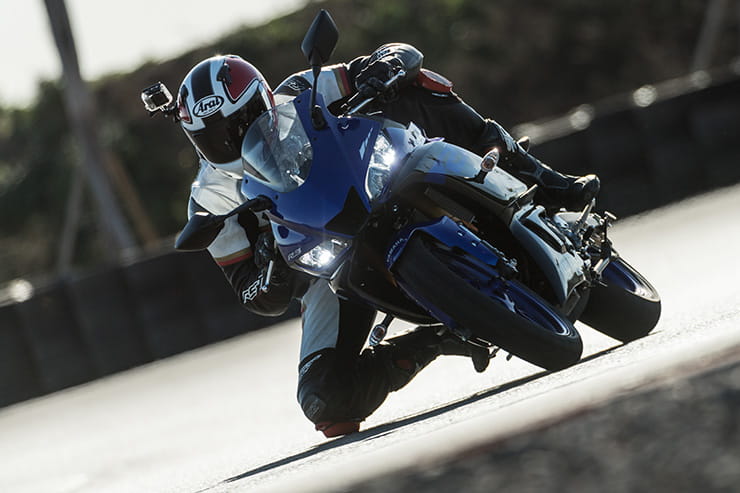 If Yamaha had its way, sportsbike riders would start their biking life on the excellent YZF-R125 moving up through the brand’s models until they got to the top-of-the range YZR-R1M. After two years of riding, the 19 year-old on the 125 could chop in their A1 licence-compliant bike and move up to an A2 machine like the 2019 Yamaha YZF-R3. Is this 321cc the perfect stepping-stone between a beginner’s bike and the YZR-R6? 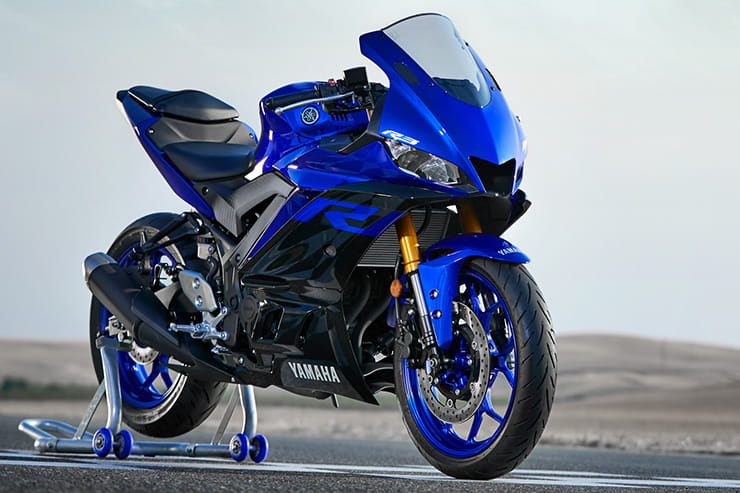 The A2 sportsbike market isn’t particularly hotly contested in the UK – Yamaha sells the majority of its R3s in Germany and Turkey (though in Turkey it’s the 250cc R25), followed by the likes of the UK, France, Switzerland and Italy. Unlike the A1 licence sportsbike market, other A2-complaint bikes have a variety of capacities, including the £4,299 Suzuki GSX250R and £6,099 Honda CBR500R.

Ultimately, if you’re happy to go with last year’s R3 model, you might find some good deals from the manufacturers, but in the case of the R3, you’d be missing out on the new styling and other useful tweaks. 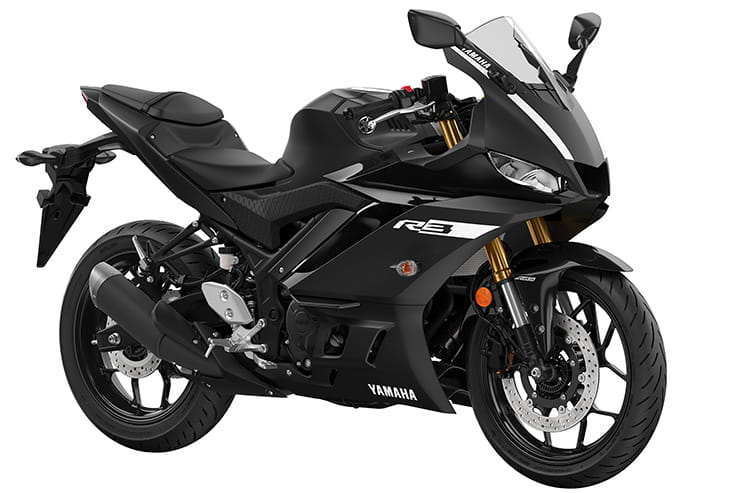 The R3 is also available in black

But the Yamaha makes its power very smoothly, right through the rev range. From around 4,500rpm the motor pulls well, all the way up to the limiter at around 13,000rpm. On the very tight Circuit De La Ribera in Spain, where the bike was launched, it was plenty of grunt on all but the relatively short start/finish straight, but take it to a full-size track and it won’t be the fastest, even when pitted against other A2 bikes.

On the road, the R3 is very easy to get along with. The power delivery is unintimidating, but it doesn’t feel gutless. At 70mph the engine’s running smoothly at just 7,000rpm, with only a hint of vibration through the pegs. 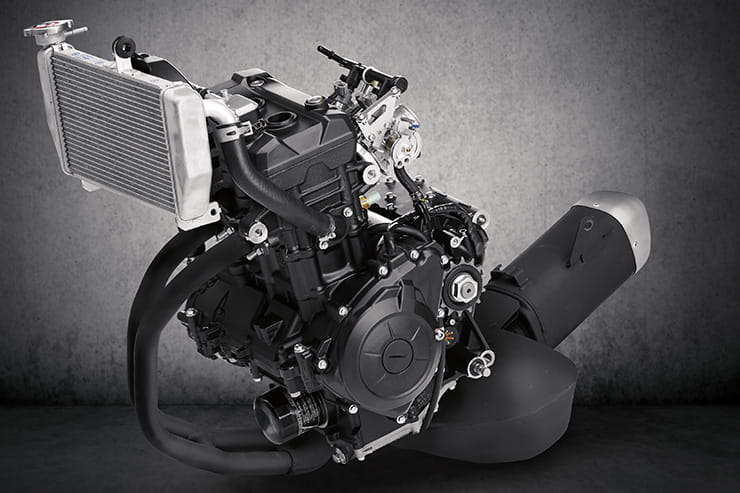 The engine is unchanged from the previous (and first) model of 2015 – while its accessible power delivery will appeal, it’s comes at the expense of outright excitement; you don’t have to work it hard to get the best from it, but in a product range that includes the high-revving R6 and ludicrously powerful R1 (which also has one of the most wonderful engine sounds of any motorcycle), the R3 is the odd one out. It’s not bad by any stretch of the imagination, but sportsbike enthusiasts might find it slightly lacking.

It’s fast enough – Yamaha claims 190km/h, which is 118mph. We didn’t get to test that, but it’s safe to say that 100mph was not a problem. There’s plenty of go for overtakes too, but you’ll likely have to work the gearbox. And because the engine has a fairly linear delivery, you might find yourself bouncing off the limiter every so often. 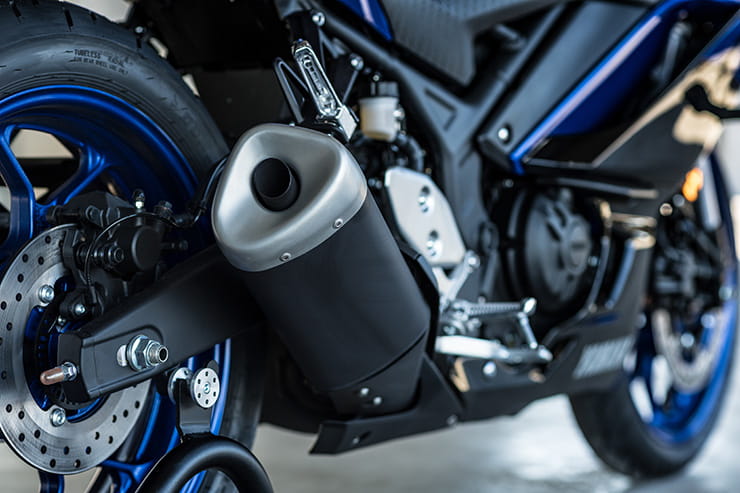 The exhaust sounds fine as standard, but the end-can is easily swapped

For a Euro 4-compliant A2 bike, the exhaust sounds pretty good. It won’t keep anyone awake at night, but it’s got a reasonable, throaty sound. You can get it slightly deeper with the optional £469.94 Akrapovič end-can, but there’s no performance gain to be had, and the sound difference is only really noticeable if you have the two running side by side.

The clutch action is light, so won’t get tiring during city riding, while a slipper clutch reduces the chances of the rear wheel locking up during aggressive downshifts (though go hard enough and it will still lock briefly). 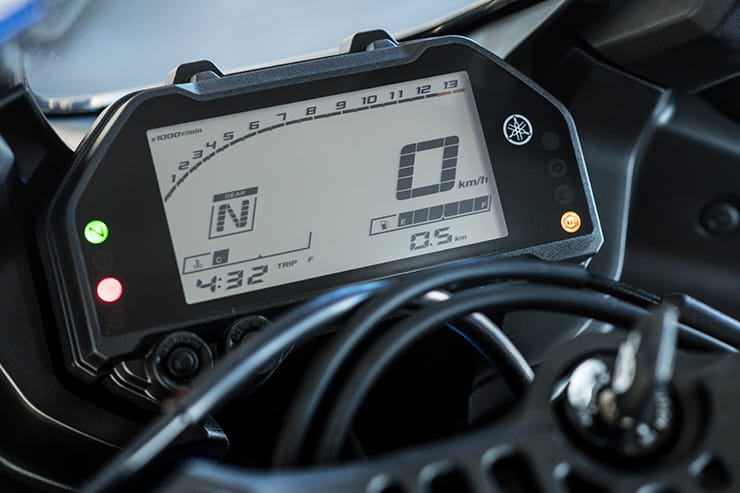 The R-series styling extends to the dash

I tend to be quite an uneconomical rider, especially on launches – I saw 54mpg on the 95mile road ride, but I know others got at least 62mpg. Yamaha’s claim of 74mpg will take some gentle riding to achieve, but according to http://www.fuelly.com, of 90 R3s travelling a total of 329,000miles, the average owner saw 70.4mpg, which gives a range to empty of about 217miles from the 14litre tank. 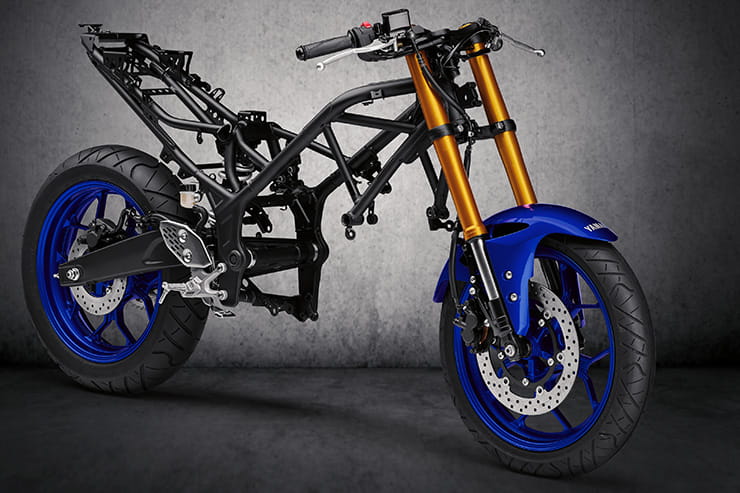 The chassis also carries across from the previous model

The R3’s chassis is a steel trellis, with a steel swingarm. After the steel Deltabox main frame and aluminium swingarm of the YZF-R125, it feels something of a step back for someone moving up in the R range.

For 2019, the chassis construction and geometry remains the same, but the forks are now 37mm upside-down KYB units, while the damping and spring rates have been made more sporty. That doesn’t mean it’s become uncomfortable though – on track the R3 feels confident and stable, even with my 5’10”, 85kg lump on it. There’s plenty of ground clearance, but it will eventually touch down – the hero-blobs had been removed from the launch bikes, and on one right-hand bend I started scraping the edge of the foot brake, but the R3 never felt unsettled. You can also panic brake mid-corner without the bike standing up too violently, as I found out after over-cooking one double-apex turn.

On the road, the R3 never felt harsh – while it’s far from the highest spec suspension, it’s very well set-up, and that confidence-inspiring handling means it’s an enjoyable bike to ride, without putting a newer rider on edge. 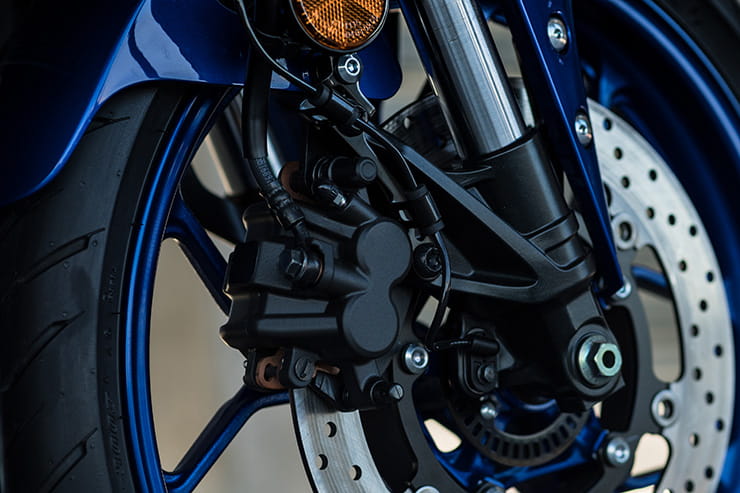 If one thing really stands out on the R3, it’s the brakes, and unfortunately, for the wrong reason; the two-piston sliding caliper up front has no useful bite, and feels woefully underpowered. Stepping off the YZF-R125 and onto the R3 it’s shockingly poor. As much confidence as the power delivery inspires, the lack-lustre brakes wipe it away.

Let’s be clear: the brakes aren’t dangerous, but grow up with two-finger braking on the R125 and you’ll need to re-learn your technique and be ready for three or four fingers on anything more than gentle deceleration. On the tight track of the launch it wasn’t a huge problem, except at the end of the start/finish straight, but on the road I regularly found myself riding slower, simply because I had less faith in the brakes.

Dropping in some decent sintered pads will make them better, and adding braided lines will improve things even further, as we found out… 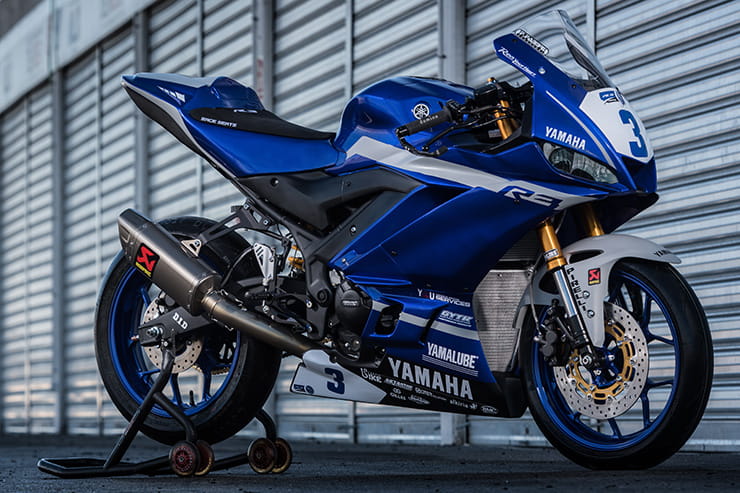 World Supersport R3: The potential within

Currently going through FIM approval, the full race-spec R3 costs around 12,000 Euros (if you add the race parts yourself), and shows just how incredible this bike can be.

Despite using the same caliper and master cylinder, the upgraded pads and braided lines of the race bike are a world apart from the road machine. Granted, the ABS pump has been removed, but it’s clear that even with it in, the system could be massively improved.

The maximum power for the Supersport 300 World Championship is just over 48bhp, and the race-spec R3 makes that thanks to the GYTR (Genuine Yamaha Technology Racing) parts and Akrapovič full-system. New pistons have a modified skirt for increased compression, along with new cams, air intake funnels and a replacement head gasket. While the higher seat unit with thin foam pad might push your weight over the front (which makes for a much more exhausting ride if you’re as race-unfit as me), there’s no mistaking the completely new feel of this bike in race spec; it’s still very usable, but the additional drive out of corners, not to mention the vastly increased speed on the straights, turns the R3 into something even the most experienced riders can’t help but get excited about.

The extra 6,500 Euros on top of the stock bike will also get you the following: 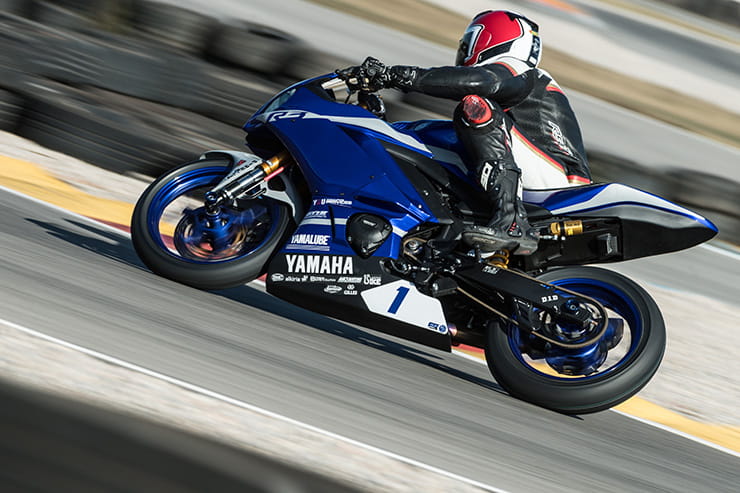 The new styling of the R3 goes deeper than just the looks, which do sit well among the supersports R range; Yamaha says that the aerodynamic drag area (CdA) has been reduced by 9%, giving an 8km/h increase in top speed to achieve that 190km/h. It’s also said to reduce turbulence, and when blasting down a Spanish motorway, I can say that there was no buffeting to my Arai Renegade V, and that I didn’t feel any significantly tiring wind blast against my chest when sitting upright. A great bike for daily commuting or longer trips away, even on the motorways.

The lack of any significant vibration also helps the mirrors give a good, clear view behind.

The seat’s comfortable (I usually get an achy bum pretty quickly), while the clip-on bars, which are 22mm lower than the previous model, as well as canted outwards by 2° more, sit at a very easy position.

Steering lock is good, and I found myself performing U-turns really easily during the photoshoot – another nod towards all-round usability. 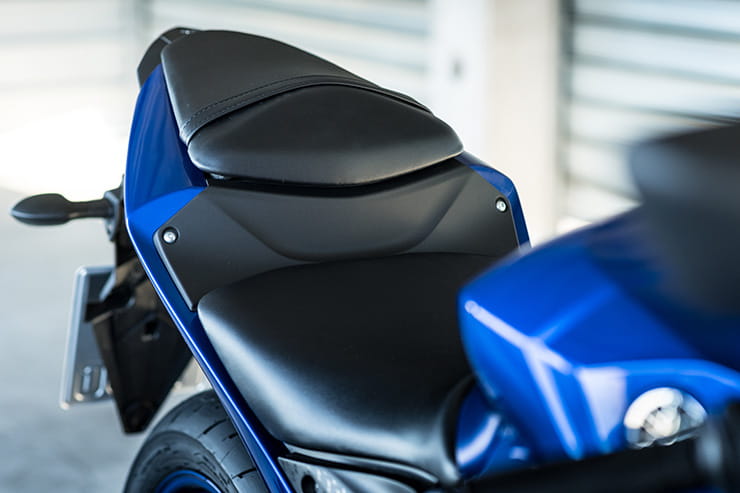 Available in black or blue, the finish on our blue models was great; I particularly appreciated the styling of the tank cover, which echoes the design of my own MT-10. Unfortunately it’s let down on occasion by parts like the cheap heel guards and steel swing-arm, but with the new upside-down forks and good quality materials, it’s a bike you’ll be proud of.

ABS is of course standard, and the LCD dash echoes the look of other machines in the current Yamaha range. It’s also got an accurate gear indicator (which doesn’t get confused when you change down more than one gear), adjustable shift light, clock, two trips, fuel consumption and a fuel reserve trip.

The lockable rear seat is easily removed, but there’s not a great deal of space under there. You should be able to fit a small lock in, like the Squire Eiger Mini, but that’ll be it. To help keep the bike secure when you’re out and about, I’d recommend the BikeTrac Grab Bag and Chain.

The R3 is very easy to get along with; it’s got a smooth, useful engine, while the riding position makes it very comfortable all day. It’s also great in city traffic, the light, nimble frame making it ideal for carving between cars.

It does sit slightly awkwardly between the inspiring YZF-R125 and the focussed YZF-R6 thanks to its steel trellis frame and some cheaper-looking parts, but what really lets it down is the poor-performing brakes.

Ultimately, the 2019 Yamaha YZF-R3 has been given a great, fresh new look that sits well in the range, and it’s a bike that will continue to appeal to the wide range of age groups and sexes that want a lightweight, easy to manage machine that’s great in the city as well as out on the open roads. 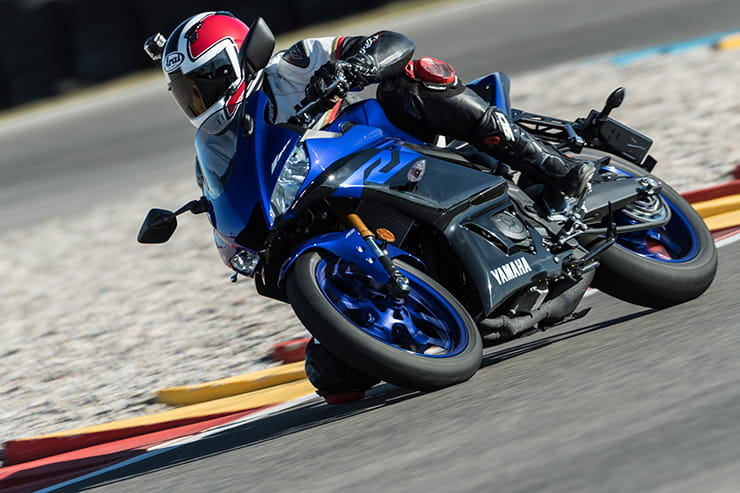 Three things I loved about the 2019 Yamaha YZF-R3…