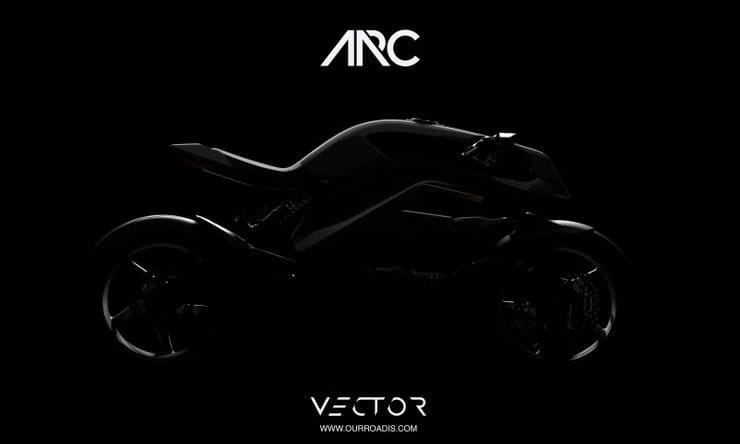 We’re guessing that means the new Arc Vector will be anything but cheap, particularly with the darkened teaser image showing hints of a hub-centre steering system and carbon-fibre wheels.

However, the most interesting aspect of the Arc Vector may not be the bike itself but the fact it comes with a heads-up display helmet and a ‘tactile’ riding suit, all part of a ‘Human Machine Interface’ that will give new ways for the bike to communicate with its rider.

The company itself was founded by former Jaguar Land Rover ideas man Mark Truman, who’s been working on it for two years.

He said: “Technology, performance, safety and experience come together like never before on two wheels. The Vector is more than just the world’s most premium electric motorcycle; it’s the world’s first motorcycle with integrated multi-sensory HMI (Human Machine Interface), it’s an innovative heads-up display helmet and it’s a tactile riding suit – all making up the most involving motorcycle experience on the market today.” 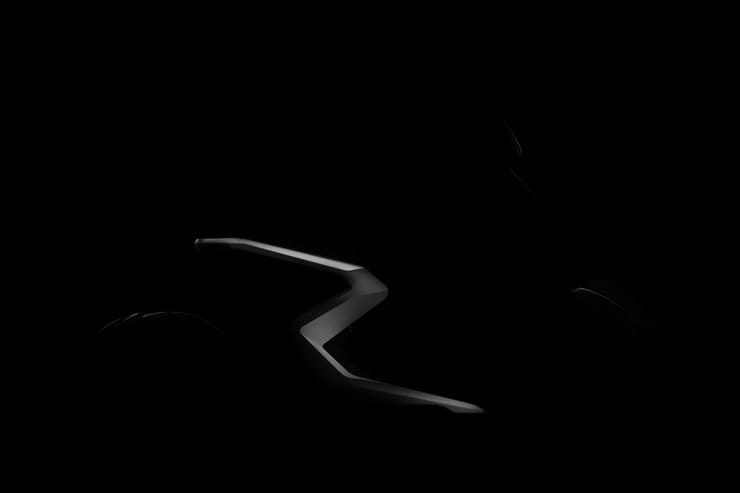 2: British electric scooter on the way too

Another British start-up with electric bike plans is Zapp, which is promising to launch its first machine – the i300 electric scooter – later this month.

The bike’s name shows its intentions to compete with conventional 300cc scooters. Whether that will be in terms of price as well as performance remains to be seen, but interestingly the firm says that it has a ‘convenient, innovative charging solution and customer service ecosystem’ that means ‘range anxiety is now a thing of the past.”

The firm says: The company is a new entrant to the market but from the outset will be a leader in the urban transport revolution, with its new scooter providing thrilling performance, innovation, performance and a practical and dependable electric range. With affordable running costs, and highly-appealing, next generation design, the Zapp 300cc-equivalent scooter is like nothing else currently available on the market.

Innovative, sporty and high-quality engineering will ensure outstanding handling and an effective delivery of torque and performance from the punchy, next-generation electric motor.

Designed from the ground up to be desirable and fashionable, customer individuality is encouraged, with a great choice of configurable options offered to meet all style preferences and budgets. A seamless ownership experience will be provided thanks to a convenient, innovative charging solution and customer service ecosystem. Range anxiety is now thing of the past. 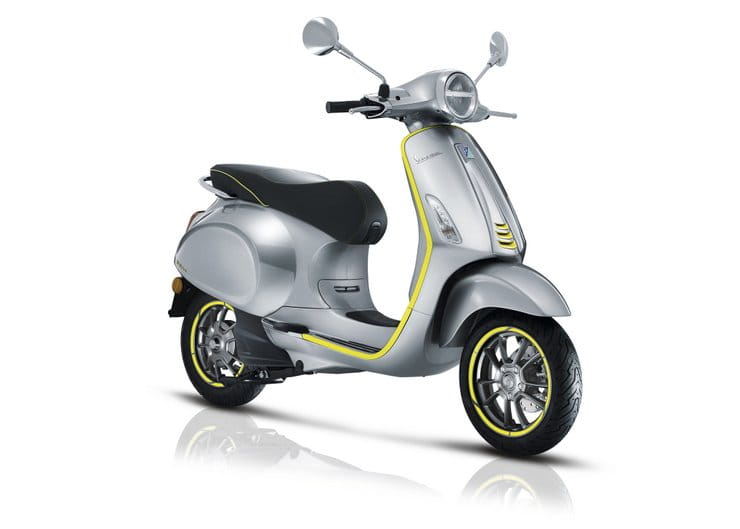 Sticking with the theme of electric bikes, Piaggio’s battery-powered Vespa Elettrica – originally shown last year – has gone on sale via a dedicated website in advance of appearing in dealers.

Making 4kW (5.36hp) and with a 100km (62 mile) range, the Elettrica sticks with classic Vespa looks despite its futuristic technology. Although slotting into what would normally be the 50cc class, Piaggio promises performance that’s significantly better than petrol-powered 50cc machines.

The bike’s UK price is set at £5999 with pre-orders being taken at a special website (here). You’ll need a deposit of £550 via credit card to secure your order.

In ‘main Eurozone countries’ (including the UK, at least for the moment) there’s the option of ‘Vespa Care’, which is a monthly payment option that covers not only the price of the bike but also includes planned maintenance, only needed at 36 months or 10,000 miles on the Elettrica, a 12-month warranty extension and road assistance. 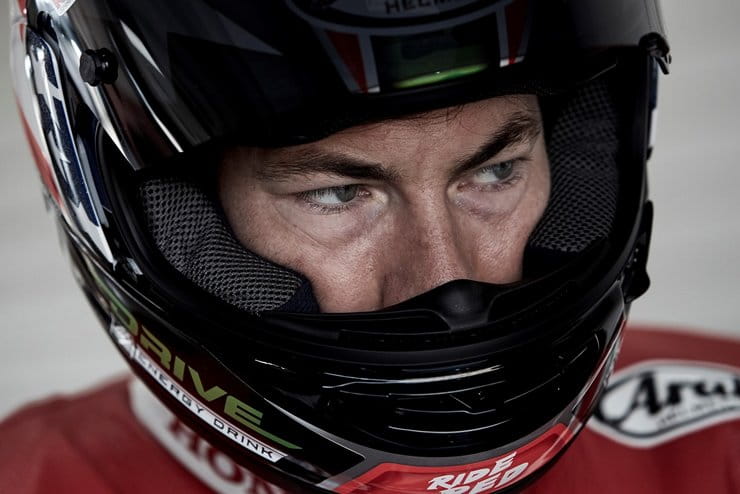 The speeding driver involved in Nicky Hayden’s fatal bicycle crash last May has been handed down a suspended prison sentence after an Italian court decided that he was partly to blame for the accident.

The unnamed 31-year-old driver was said to be doing 70km/h in a 50km/h area when he hit Hayden, who was riding a bicycle near Rimini at the time. Experts at the trial said that, had he been travelling within the speed limit, he could have avoided the accident.

However, the investigation placed part of the blame on Hayden, who was listening to music on headphones and went past a stop sign at around 20km/h. The official accident report placed 30% of the blame on the car driver.

Judge Vinicio Canatarini handed the driver a one-year suspended sentence, and will reveal reasons behind his sentencing decision in 90 days’ time.

The auction at Barber Motorsports Museum ended with total sales of nearly $1.5 million, including several McQueen lots. Others were his Bell helmet, which took an astounding $21,875 (£16,634) including premium and an ex-McQueen Vincent Comet (£48,096).

Malcolm Barber, Bonhams Co-Chairman, said: “This is the first of our annual sales in association with the Barber Motorsports Museum. The collaboration between our team and the Museum at this amazing venue proved the perfect synergy for an international sale of collectors’ motorcycles alongside this established weekend event.”

Ben Walker, International Director of Motorcycles at Bonhams, added: “We’re very pleased with the turnout and results of this first sale. The Barber Motorsports Museum is one of the most prestigious institutions of its kind and it’s been a real pleasure to partner with them.”